Air-Dropped Carrots Might Be a Temporary Answer to a Threatened Wallaby's Prayers - Atlas Obscura
Want to see fewer ads? Become a Member. 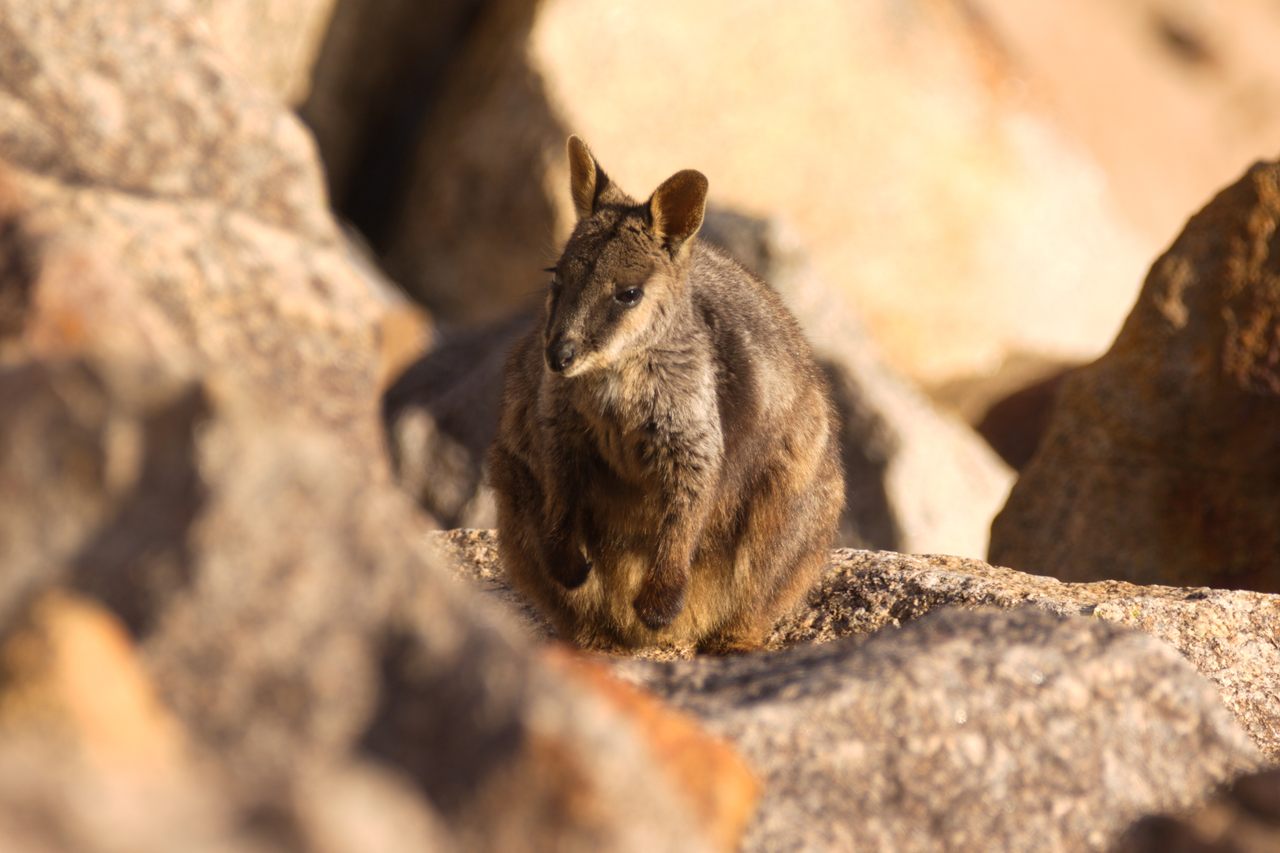 Hungry? Donald Hobern/CC by 2.0
In This Story
Destination Guide

Recently, Australian authorities air-dropped thousands of pounds of carrots and sweet potatoes across the scorched landscape of New South Wales, as part of a bushfire recovery effort backed by the state government. Scientists have dropped off snacks, too. The hope is that the veggies wind up in the little paws and bellies of brush-tailed rock-wallabies, whose hiding places and food sources have been badly damaged by fires exacerbated by climate change. Across Australia, millions of acres have burned, more than two dozen humans have died, and according to Christopher Dickman, an ecologist at the University of Sydney, an estimated 1 billion animals have been affected.

The brush-tailed rock-wallaby was in trouble even before the fires—and that precarious position made the animals even more vulnerable when the flames tore through. Fire aside, the species “has declined enormously,” largely because of predation by foxes, says Ben Moore, a senior lecturer in ecology at the Hawkesbury Institute for the Environment at Western Sydney University. “It is listed as vulnerable nationally, but endangered in New South Wales and Victoria, the two states most affected by fires.” In Victoria, there are only two colonies remaining in the wild, according to Zoos Victoria, with just a few dozen members in each. In many places, the recent fires scorched the plants that the animals eat and the hiding places where they dodge predators, making life even harder for a species that was already stressed.

While many ecologists may try to limit intervention in the lives of the creatures they study, this feeding is a short-term move. Most of the known populations of brush-tailed rock-wallabies are mapped and monitored by camera traps and other tactics, which means that “food drops can be targeted to where known populations occur,” says Thomas Newsome, an ecologist at the University of Sydney. “The feeding is not an attempt to maintain large numbers of animals across the entire landscape,” Moore says, “but rather a last-ditch attempt to keep these remaining populations hanging on.”

Brush-tailed rock-wallabies don’t typically chow down on carrots and sweet potatoes—usually, they leave their stomping grounds on rocky outcrops and cliffs to feed on grasses, sedges, shrubs, and ferns, Newsome says. The advantages of root vegetables are that they’re easy to obtain, simple to transport, and they keep well, Moore says. “They are a good source of energy, and the animals happily eat them.”

#drought took their water and #bushfire took their food so our team, based ⁦@UniNewEngland⁩ have been providing both to some key #rockwallaby colonies (with permission) for nearly 2 months now. Listen to the happy chomping! pic.twitter.com/bfHkyWPCZj

Newsome says that it’s unlikely that any given population will nosh their supplementary food for more than a few months, and then surviving wallabies will go back to eating greens. Of course, it’s hard to predict when plants will regrow, says Marco Festa-Bianchet, an animal ecologist at the Université de Sherbrooke, in Quebec, who studies kangaroos. A lot depends on rain, which is badly needed after months of heat and drought. If enough falls, “there will be stuff regrowing in a couple of weeks,” he says. “In a scenario where everything is gone and it doesn’t rain for awhile, it could be months with nothing.” (Rain has already begun in New South Wales, but as Earther reported, a downpour can cause floods and landslides in landscapes where fires have consumed the vegetation.) The first plants back on the scene tend to be grass and other ground cover, says Newsome, followed by regrowth on surviving trees.

Newsome says there’s little risk that the animals will become overly dependent on their air-dropped food supply. “If the food is only provided for a short period, and then slowly reduced, they should quickly readjust to finding their own food,” he says. “I suspect they will switch back to natural foods as soon as they become available.” In the meantime, the brush-tailed rock-wallabies will be adorably gnawing on carrots and sweet potatoes, trying to hang in there.

Some Space Rocks Are Notorious for Being Stinky

When ice goes, lichens and mosses move in and an entirely new ecosystem starts to take shape.
volcanoes

What Happens to Caves When Wildfires Scorch the Surface?

Discovering the trait may help scientists protect the tuatara, which has been around since the dinosaurs.
Video • Object of Intrigue