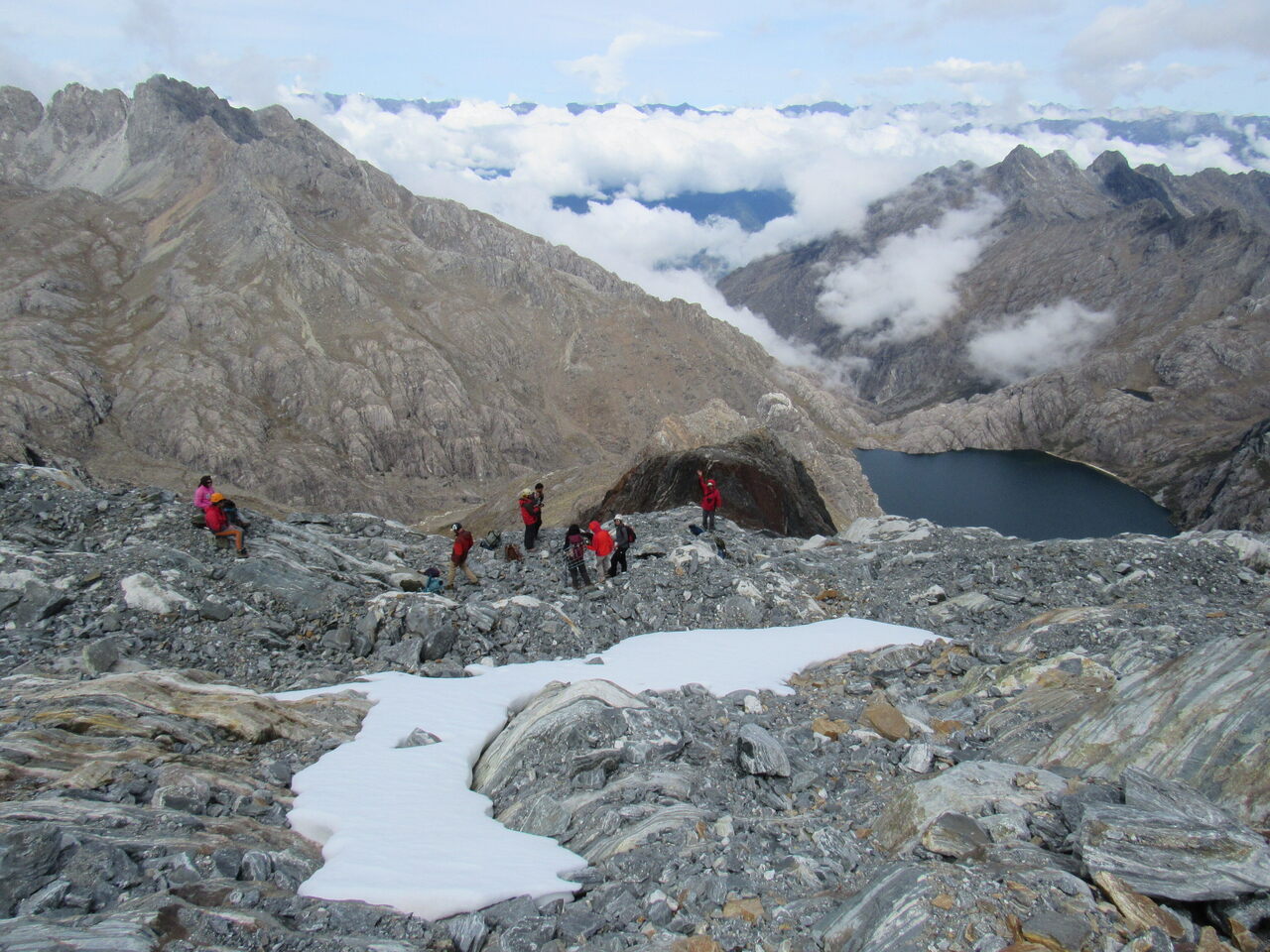 The Last Venezuelan Glacier team examines the recently exposed areas just below the Humboldt's glacier edge in 2019, more than 15,000 feet of elevation. José Manuel Romero
In This Story
Destination Guide

In 1986, at the age of 21, Alejandra Melfo moved to Mérida, Venezuela, the “city of eternal snows,” to study physics at the University of the Andes. There, in the mountain city, she often looked out toward the horizon at the vast Sierra Nevada de Mérida: a large, muscular, towering expanse three miles in the sky and blanketed by snow and the broad sheets of glaciers. Having just arrived from Uruguay, a country with no mountain ranges, she fell in love.

As the years went by, Melfo saw the landscape morph. Two of the glaciers that could be seen from the city were rapidly receding. Large cracks emerged, splintering the ice into smaller chunks. Entire sections of the glaciers collapsed, exposing the rock beneath. By 1990, one mountain, Pico La Concha, had lost all of its glaciers. In 2017, Pico Bolivar, Venezuela’s highest peak, followed suit. Today, only one glacier remains in Venezuela: on the second highest peak, Pico Humboldt.

“It’s an era that is [almost] completely finished now,” says Melfo, a particle physicist at the University of the Andes, who has recently been working on projects involving biology and ecology, including research on this last glacier.

Pico Humboldt’s glacier has survived partly because it is sheltered by the shade of its own peak—but only barely. In 1910, the glacier covered nearly 1.3 square miles. The last measurement, in 2019, suggests the glacier has shriveled to less than 0.02 square miles, or about the size of Mérida’s soccer stadium, less than 2 percent of what it once was. If the glacier disappears, Venezuela may become the first country in the world to have had glaciers and then lost them all.

This is inevitable, experts say, as no climate intervention would slow or stop it in time. Venezuela’s tropical glaciers—like others, in places such as Colombia, Peru, Kenya, or Uganda—are particularly sensitive to climate change, given that they are already frequently exposed to warm temperatures. By the end of the decade, the last one will be gone. “The retreat, you can’t stop it, that’s not possible,” says Maximiliano Bezada, a quaternary geologist at the University of Minnesota who is not involved in current research on the glacier.

But rather than despair, a team of scientists based in Venezuela is eyeing a rare opportunity. These glaciers have existed for hundreds of thousands of years, and now the peaks they once blanketed are likely to remain uncovered by permanent snow and ice for thousands more. This transition, says Melfo, provides a unique window into how life emerges in essentially lifeless terrains, a process known as “primary succession.”

“[We’re] witnessing exactly the moment when these things change from one status to the next. This is very special,” she says. “Seldom that you can see things at the geological scale happening in front of your eyes.”

The scientific work began with a series of long, steep hikes. In 2019, Melfo and a interdisciplinary team, including a botanist, ecologist, lichenologist, and more, made three trips to Pico Humboldt. At over three miles of elevation, with plenty of equipment to carry, and without much experience with such conditions, it took the team two to three days to arrive near the base of Pico Humboldt’s glacier.

Once there, the goal was to record how new life would colonize the landscape, and understand what kinds of interactions were taking place between plants, mosses, lichens, and mammals.

To do this, though, they needed to document how life unfolded over time, a painfully slow process that would normally require returning to the site several times over many years. But in this case that wasn’t entirely necessary. The retreat of the glacier would provide a time series for them. So they created a map of how far the glacier had receded at five distinct points between 1910 and 2019, and documented the ecosystem at each.

“We can use the glacier as a ‘time machine,’” says Luis Daniel Llambí, an ecologist at the University of the Andes and the Consortium for Sustainable Development of the Andean Ecoregion, who coordinated the research expedition. “As you move away from the glacier, you’re traveling into the past.”

The team found that sites farther away from the glacier were already sustaining rich, diverse ecosystems. Near the edge of the glacier, however, the environment was far more desolate: few signs of life beyond lichens, mosses, and the occasional plant. These were the first colonizers of the newly available land.

But there are surprising insights in this seemingly barren landscape. It seems to be a place of unlikely cooperation. Lichens and mosses have anchored themselves to rocks, and both capture moisture for plants and act as a shield from the wind while they grow. Together, the lichens and mosses are eroding the rocks, fixing essential nutrients, and forming a a crusty soil layer.

“Even in the simplest systems, when there is a very hard environment, cooperation starts to happen more often,” says Melfo.

The team also found myriad previously undocumented species of lichens and mosses. Of the 47 species of lichens identified, more than half had never before been seen in the country, and seven of them may be totally novel species, says Llambí. Of the 55 species of mosses, six had never been found in Venezuela. “It’s a special assembly of species,” he adds.

Finding so many new species of lichens and mosses is unusual, says Llambí: The same species tend to populate alpine environments, even in different parts of the world, seemingly adapted to the harsh conditions.

Also unusual was the way life emerged in these dire conditions. Lichens, which are generally thought to dominate ecosystems at the earliest stages of succession, actually seem to be playing a secondary role. There, mosses took the lead. This may seem like a trivial difference, but beginning an ecosystem with a different base can impact how that ecosystem will develop, says Mariana Cárdenas, a lichenologist at the University of Minnesota.

“When you change the first part of the first steps of the first organisms that colonize these areas,” she says, “everything is like a chain, and it changes everything else.”

The future of these ecosystems is still unclear, says Cárdenas, but it will most likely closely resemble the ecosystems below that have spent more time away from the glacier, teeming with plants, birds, and other animals. The glaciers may be disappearing, she says, but they’re opening the way for a collaborative dance of life under challenging conditions.

There’s life in the shadow of Pico Humboldt’s glacier, but the fading remnants of ice are still a bleak reminder of what is yet to come, in the tropics and elsewhere, says Melfo.

“This is a very, very good model of what can happen in other places,” says Andrés Yarzábal, a molecular microbiologist at the Catholic University of Cuenca, in Ecuador, who was not involved in the research. “The same phenomenon, the same process which is right now occurring in Venezuela and in Colombia, will also happen in other countries.”

Now, when Melfo looks out toward the horizon in Mérida, snow no longer hangs in cornices over the peaks of the Sierra Nevada. Carrying out this research is the least she and the team can do to pay tribute to the country’s loss, so that the glacier’s demise doesn’t have to be in vain, she says.

“Venezuela [may be] the first and the others will follow suit,” she says. “And when you are the first you have a responsibility to call the attention of other people.”

The Centuries-Old Plays Helping to Revitalize a Once-Lost Language

The majestic African baobab has seen several growth spurts over its 1,200 or so years.
Video • PinDrop