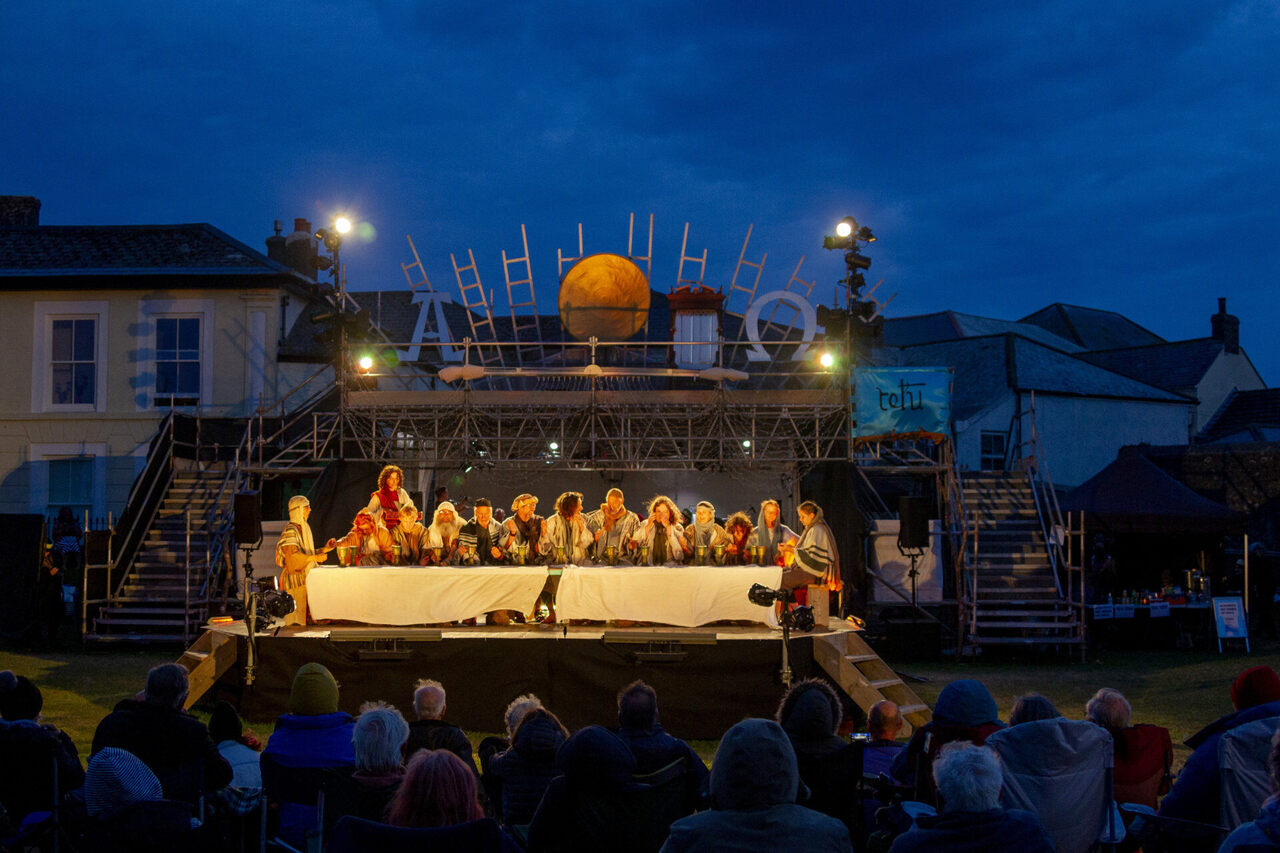 In September 2021, thousands came to Cornwall to see the Ordinalia, a cycle of three, 14th-century religious mystery plays originally written in Cornish. Mike Newman
In This Story
Destination Guide

Producer and actor Mary Ann Bloomfield waited in anticipation as dusk fell over the medieval plen-an-gwari amphitheater in St Just, in southwest Britain. She had just introduced the first performance of the Ordinalia trilogy, and as she had hoped, the open skies above the stage stayed clear and the audience quieted as the choir opened the show: “Y’n dallathvoz Dyw a wrug nev ha’n nor. Hag yth esa an nor heb roth, ha gwag, ha tewlder war vejeth an downed…”

It was now clear to everyone what Bloomfield already knew: this was no ordinary play. Without offering translations, the choir continued to sing the centuries-old Cornish-language song recounting the first eight verses of the Book of Genesis.

Pre-dating Shakespeare by some 200 years, the Ordinalia is an epic cycle of three, 14th-century religious mystery plays originally written in Cornish—or Kernewek, as it is known in Cornish—the ancient Celtic language of Cornwall. Branded heretical and banned by the English-speaking monarchy in the 1500s, the Ordinalia disappeared from stages as the Cornish language slowly died out.

But the language was brought back to life by scholars in the 19th century, and the 20th century saw a resurging interest in the Cornish. Since 2009, UNESCO has categorized Cornish as “endangered,” rather than “extinct.” The 2021 production of the Ordinalia was the third full performance of the plays since 1969, more evidence of the revival of a marginalized Celtic culture and the once-dead language of Cornwall.

This year’s performances also celebrated the grand, if temporary, homecoming of the only surviving 15th-century Ordinalia manuscripts to Cornwall. The original copy, handwritten in medieval Cornish with Latin stage directions and detailed stage layouts that were copied for the modern production, an original copy of the Ordinalia returned to the region, on loan from the Bodleian Library in Oxford, for the first time in centuries.

Despite this growing interest in the Cornish language, Bloomfield worried it would be difficult selling tickets for a play partly performed in an only recently revived language that few people speak fluently.

“I was terrified!” Bloomfield says. “I thought, no one’s going to come, it’s going to rain all the time, and everyone’s going to hate it.” But thousands of people turned up for two weeks of open-air productions in the medieval amphitheater, 15 individual performances, featuring Celtic devils on stilts, elaborate pyrotechnics, and animatronic puppets, all put together with the help of 237 volunteer actors, musicians, and crew from the local community.

Playwright Pauline Sheppard adapted the medieval plays for a modern audience. Sheppard first came across the Ordinalia in the Bodleian Library when she was 16, and she began adapting elements of the plays in the 1980s and then completed the full cycle in 2004. The three plays take the audience on a whistle-stop tour of Old Testament tales and then dramatize the death and resurrection of Jesus. But for Sheppard, the main reason to stage the plays is to celebrate “how the Cornish language has been kept safe in these plays, for all these years, even when the rest of England was stamping all over Cornwall.”

That’s where the unique role of the ordinary came into play. The ordinary was typically a man of the church whose job it was to tell people where to stand or what their lines were. This year, Sheppard wrote the ordinary into the show, a role designed specifically for Bloomfield. “They wouldn’t have had time to practice the plays,” says Bloomfield. In 2021, neither did Bloomfield’s cast. “We only had six weeks, and that wasn’t long enough to rehearse—especially with COVID.”

Sheppard spent the best part of a year laboring over six hours of theater, and for her, one of the most challenging aspects to convey was the Cornish sense of humor. Even if you could understand medieval Cornish, you’d never understand the old Cornish jokes today.

“The Ordinalia was topical in its own time,” says Sheppard. “So it needs to be topical again when it’s renewed.” Sheppard’s adaptation has a go at second homeowners buying up holiday properties in Cornwall, for example, and topical problems such as Brexit. In medieval times, the plays would also have likely joked about fishing, farming, and religion, and there’s no doubt there would have been digs at the English.

The biggest debate over the production was how much of the Cornish language should appear in the modern adaptation. Sheppard ended up writing the majority of parts for English-speaking actors but included one character who spoke entirely in Cornish and another who spoke in both English and Cornish. The Lord’s Prayer was also spoken in Cornish throughout, and the choir director wrote entirely new scores, all in Cornish.

Sheppard’s decision proved controversial in Cornish-language-speaking circles. Matt Blewett isn’t a professional actor, but he has been learning the Cornish language for five years, and he auditioned for the Cornish-speaking role of Peter the Disciple when he heard that the plays were going to be predominantly in English. “I slipped in a bit more Cornish than there was in my original script,” he admits.

Blewett is confident that an audience would embrace a production that was entirely in Cornish. After all, opera is popular, as are television shows and movies with subtitles. But while he says there’s no “intellectual” reason for the Ordinalia not to be performed in Cornish, there is the practical issue of “capacity.”

The primary challenge when staging a play in an only recently revived language that has a cast numbering in the hundreds is that there aren’t all that many fluent Cornish speakers to draw upon, let alone Cornish-speaking actors. Still, Sheppard believes that the next performance, currently scheduled for 2024, could be performed entirely in Cornish if done by a professional company with a professional linguist.

For Bloomfield, though, linguistics isn’t necessarily the most important feature of the Ordinalia. “For me, it’s all about community,” she says. “It’s about doing something in the original venue where it would have been performed in medieval times. In 1375, or thereabouts, it was probably being performed, right here in the plen-an-gwari in St Just! That’s the magic!”

In 1972, fascination with American culture spurred an Italian showman to revive a medieval comic tradition.
medieval

Archaeologists may have found where one of the country's oldest manuscripts was written.
temples

Join us for a daily celebration of the world’s most wondrous, unexpected, even strange places.
medieval

A tiny group of scholars added 500 words and made 5,000 revisions to the Dictionary of the Irish Language.
Video