How a Breast-Shaped Cake Became the Symbol of a Sicilian City - Gastro Obscura
Want to see fewer ads? Become a Member. 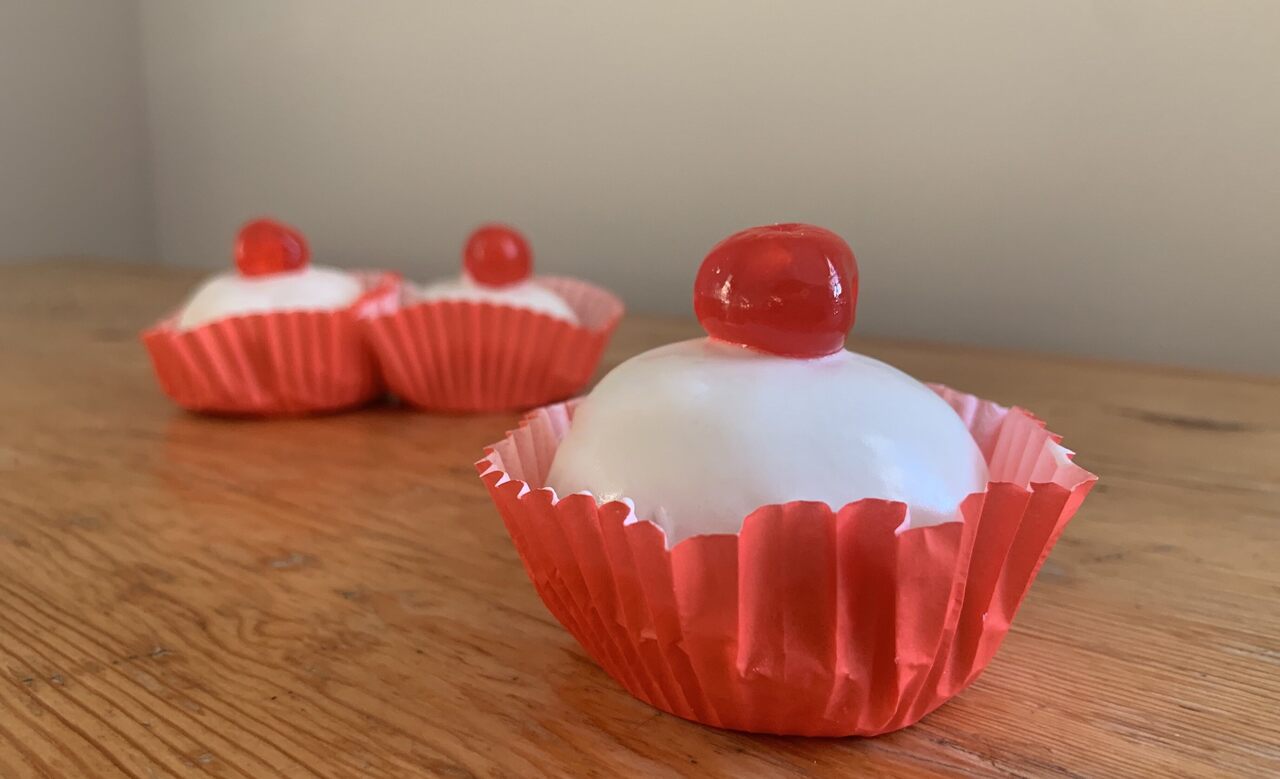 Packed with sweet ricotta, candied fruit, and sponge cake, the treat is indulgently intense. Sam O'Brien for Gastro Obscura
In This Story
Food

Every February in Catania, an ancient Sicilian city in the shadow of Mount Etna, the breast reigns supreme. During the first week of the month, crowds fill the streets in tribute to Saint Agatha. Local guilds carry massive, golden candle holders, or candelore, featuring sculptures that depict the martyred maiden and her gruesomely amputated breasts. Amid these brutal images of the saint, commemorated every February 5, Catania’s bakeries contribute a curious local specialty: small, breast-shaped cakes topped with a single cherry “nipple.”

While large events are cancelled this year due to COVID-19, Catania is still paying tribute to Agatha with traditional cakes modeled after her breasts. Known as minni di virgini, cassata di Sant’Agata, or minni di Sant’Agata, they typically consist of a marzipan shell molded into a smooth half-sphere, iced to a porcelain sheen, and topped with a candied cherry. Inside awaits sponge cake, sheep’s milk ricotta, chocolate, and candied citron or squash. Though decadent and perhaps even obscene to visitors, these cakes—and the breasts they symbolize—are a crucial part of Catania’s identity.

According to a medieval chronicle of saints, Agatha was a local girl, living as a Christian in Catania during a period of intense religious persecution. A local prefect, stung when Agatha rejected his advances, had her jailed and tortured. Her tormentors even severed her breasts with pincers. Tradition has it that, although her breasts were miraculously restored by Saint Peter, she died on February 5, 251, after the torturers dragged her over hot coals and fragments of broken pottery.

Although Agatha’s story is a brutal tale of violence against women, many of the traditions tied to her festival harken back to earlier celebrations venerating non-Christian goddesses. Scholars, such as the Sicily-based food historian Mary Taylor Simeti, point to the breast-shaped cakes of ancient Greece as potential predecessors to minni di Sant’Agata. During the festival of Thesmophoria, for example, Greeks made these anatomical cakes with sesame seeds and honey to honor the harvest goddess Demeter.

Even though she is a Catholic saint, Agatha’s festival in Catania still carries traces of goddess worship. “With most of these very big festas, or Catholic celebrations, whether in Latin America, Spain, or Italy, it’s always about Jesus,” says Bernadette Wegenstein, a filmmaker and media professor at Johns Hopkins University who attended the Catania festival while making a documentary about breast cancer. “But this one really has nothing to do with Catholicism. Catholicism is trying to own the story, but really, no one seems to care about Catholicism. They all just want to have access to her.”

One of the easiest ways to access the saint is by eating minni di Sant’Agata, especially since they’re available year-round in Catania. It’s impossible to pinpoint when, exactly, these anatomical cakes went from pagan treat to saintly sweet, but Sicilian nuns are credited with popularizing them. Before they became associated with Agatha, early versions of the cakes were simply known as minni di virgini, which may imply that they were a specialty of the nuns of the Monastero di Vergini in Palermo.

Minni di virgini have been a specialty of Sicilian convents for hundreds of years, but in recent history, they’ve become associated with Catania’s celebrations. “Agatha is always depicted holding a tray with her breasts, which look like two pastries on it,” says Simeti. “So the idea that Catania would start calling these sweets di Sant’Agata is such an obvious leap that it hardly needs explaining.”

It might seem odd that convents or Catholic festivities would embrace breast-shaped cakes. In Giuseppe di Lampedusa’s 1958 novel The Leopard, the narrator recoils in horror as he beholds minni di virgini, which he calls “a profane caricature of St. Agatha.” According to Simeti, this prudishness is a modern reaction. Such sentiments didn’t exist during the early days of convent confectionery, she says. This bawdy baking isn’t limited to Saint Agatha, either. Catholic confectionery offers plenty of other suggestive treats, such as the phallic cakes baked for São Gonçalo’s festival in Amarante, Portugal.

Both Simeti and Wegenstein also note that, in Italy, the breast isn’t as intensely sexualized as it is elsewhere. “In Sicily, it’s more of a symbol of femininity, motherhood, nutrition, and fertility,” says Wegenstein. To the citizens of Catania, this is what Saint Agatha and her symbolic pastry represent. The saint’s celebrations are muted this year, but there’s no need to take to the streets of Catania to buy minni di Sant’Agata. For a sacred sweet, try the recipe below.

Yield: 4 to 6 cakes, depending on the size of your mold.

Special equipment:
Spherical molds (These will need to have a smooth, half-sphere shape to resemble the roundness of a breast. Silicone baking molds, ice-cube molds, or even tennis balls cut in half will work.)

1. Using a sieve, press the excess liquid out of the ricotta until it’s no longer wet. Mix the cheese with the powdered sugar in a bowl. Cover and refrigerate the mixture for at least three hours before using.

2. To make the marzipan, add the almond flour and cup of powdered sugar to a food processor and blend until the mixture is a fine dust. Add the egg whites, and briefly blend until the paste forms into a ball. Scrape it onto the counter and knead to make sure all the ingredients are well-combined. Refrigerate until you’re ready to assemble the cakes.

3. To make the sponge cake, preheat your oven to 350° F. Beat the sugar and eggs until frothy, gradually sift in the flour, then pour the batter into an 8-inch cake pan that’s been greased and floured. Bake the cake for 20 minutes or until it’s golden, then set it aside to cool.

4. Take the ricotta out of the refrigerator. With a rubber spatula, blend in the chocolate, citron, and candied orange peel.

5. To assemble the cakes, first roll out the marzipan until it’s about 1/8th of an inch thick. Cut out four or six circles, each slightly larger than cavities of your spherical molds. Carefully line the inside of each mold with the marzipan.

6. Cut the cake into pieces small enough to fit inside the molds, and cover each marzipan cavity with thin slices. Then, spread a layer of the ricotta mixture on top of the sponge cake in each mold, about one to two tablespoons. Fill up the molds completely with more slices of sponge cake.

7. Refrigerate the cakes to firm them up. After two hours, invert the molds on a baking rack and carefully nudge them out.

8. To make the icing, whip the egg whites until they form soft peaks. Slowly mix in the powdered sugar, then add the lemon juice. Blend until the mixture has a batter-like consistency and an opaque sheen.

9. Use a spatula to ice the cakes in thick strokes. Top each with a candied cherry.

Eat like a first-century Roman, using recent archaeological discoveries as your guide.
saints

St. Hildegard was a mystic, healer, and passionate proponent of spelt and nutmeg.
festivals

This May Day, make Beltane bannock, a simple snack with a long history of superstition and divination.
food

Qurt is salty, long-lasting, and packed with protein.
Video • PinDrop

A popular legend claims that the famous pizza was invented at a restaurant in this alley.
Rome, Italy

Inside this Mcdonald's you can dine on your Big Mac and fries next to a 2,500-year-old Roman wall.
Verona, Italy

Atop the former site of a historic bakery sit two stone tributes to Verona's contribution to traditional Italian baking.
Want to see fewer ads? Become a Member.
From Around the Web
Atlas Obscura Trips
Hidden Florence: Private Palazzos & Secret Societies
View This Trip
Thanks for sharing!