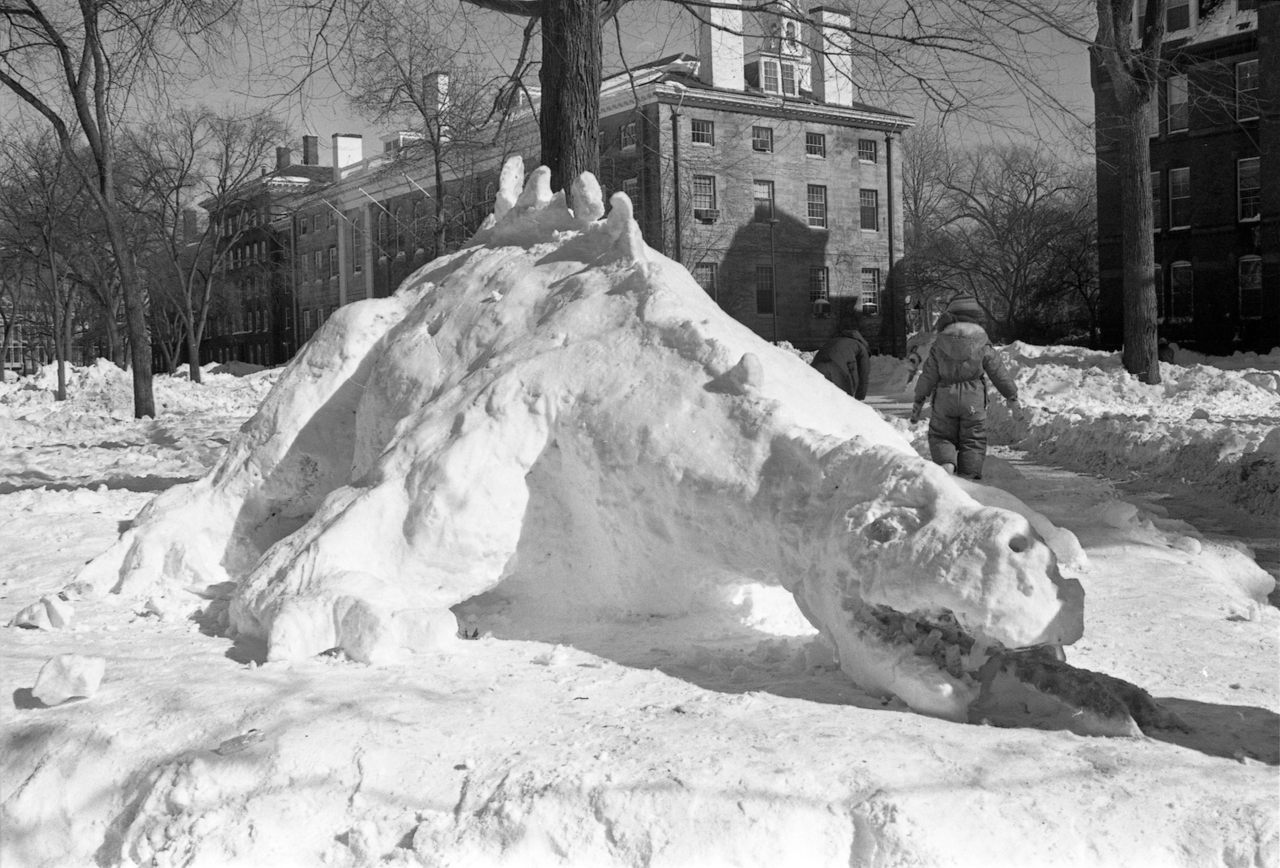 This creature, birthed in Cambridge's Harvard Yard after a blizzard in 1978, isn't it. Charles Dixon/The Boston Globe via Getty Images
In This Story
Place

A careful eye can find hundreds of dinosaur tracks running along the Connecticut River.
Destination Guide

While much of America rehashes the outcome and aftermath of a recent election, voters in Massachusetts have been electing another official. The job description is vague, the duties negligible. The gig is mainly as a figurehead, which is good, because the candidates aren’t particularly revved up about representing their constituents. They demonstrate astonishingly little interest in local government. In fact, they’ve been dead for millions of years.

If Massachusetts Representative Jack Patrick Lewis has anything to say about it, his state will soon become the 13th to appoint an official state dinosaur. Lewis—a lifelong dino nerd who has traveled to several dig sites and brags about seeing every Jurassic Park movie on opening night—hatched the idea while noodling over ways to make paleontology accessible and engaging for his kid’s Cub Scout den. Introducing a bill to name a state dinosaur struck him as a good way to get kids jazzed about both science and the legislative process. It also seemed really fun.

One dinosaur to represent the state—but which? “I initially assumed that there hadn’t been dinosaurs discovered in Massachusetts,” Lewis said at a recent webinar about the dinosaur election, hosted by Boston’s Museum of Science. Not so—but not especially far off, either. Lewis tapped researchers to help brainstorm some potential nominees. The task “turned out to be relatively simple, because there are only two species of dinosaur whose bones have been found in the state,” says Noel Heim, a paleobiologist at Tufts University who consulted on the effort.

During the Early Jurassic period, which lasted from about 200 million to 175 million years ago, the land that is now Massachusetts was semi-arid and probably monsoonal—drenched in some seasons, and dry in others, says Mark McMenamin, a paleontologist and geologist at Mount Holyoke College who also consulted on Lewis’s initiative. The land was speckled with prominent lakes and stippled with juniper-like trees. Upland, large portions were barren and rocky. We know that several species of dinosaurs crossed this landscape because some of their tracks are preserved around the shores of those ancient lakes. But it’s famously difficult to match a track with a track-maker, and there’s still no consensus about which species’ travels are recorded, for instance, in the rock at the Dinosaur Footprints site in Holyoke.

Across the state, finding an area of exposed prehistoric bedrock “larger than a typical parking lot is relatively rare,” McMenamin says. Dinosaur Footprints is an exception. The same goes for some roadcuts along I-91 that reveal red-and-brown Jurassic rocks. The strata are visible in some parts of the Holyoke and the Mount Tom range, but “the exposures are really limited compared to what you’d find in a Western state like Colorado or Wyoming,” McMenamin says. Out West, he adds, some fossils almost ask to be found. “There are vast stretches of land where you can see the bones sticking out of the ground.”

So Lewis drew his candidates from a comparatively shallow pool. The only swimmers were Podokesaurus holyokensis and Anchisaurus polyzelus, the two species that scientists know to have left bones behind in Massachusetts. Both were extracted from the Hartford Basin.

Geologist, paleontologist, and professor Mignon Talbot discovered P. holyokensis near Mount Holyoke in 1910. Writing in The American Journal of Science in 1911, she described how a split “bowlder” yielded “the excellently preserved skeleton of a small dinosaur” with hollow bones and a “light and delicate” frame. Talbot’s fossils were lost a few years later, when a fire razed the campus building that housed them. (She and her students sifted through the rubble, but couldn’t recover the bones.) Casts remain, though, and scientists believe that the dinosaur was carnivorous and at least partially feathered, stretched between three and six feet long, weighed around 90 pounds, and scampered between nine and 12 miles an hour. A. polyzelus turned up in the 1850s, when armory crews blasted ground in Springfield. The fossils are in the collection of Amherst College, and the dinosaur may have been an ancestor of the Argentinosaurus, a genus of gargantuan sauropods that would hulk onto the scene millions of years later, during the Late Cretaceous.

Massachusetts residents cast ballots online throughout January. P. holyokensis trounced A. polyzelus in the polls, winning more than 60 percent of the 35,000 votes. (“I’ve been rooting for this one since the beginning,” Lewis said while announcing the winner at the Museum of Science webinar, sporting a tie with a jumble of dinosaurs on it.) On February 4, Lewis introduced two bills seeking to appoint P. holyokensis the official dinosaur of the Commonwealth.

Given his Holyoke home base, McMenamin also voted “for the local candidate,” he says. Now that his pick has clinched victory, the scientist has set his sights on another goal: stoking this enthusiasm for paleontology and trying to mobilize support for more digs. “Vertebrate paleontologists would just salivate if we could get more material,” he says. “We have some work to do to figure out who else is in the cast of characters.” He hopes that more excavations will soon be in progress around the state, and that more dinosaurs will surface. “There’s no question that they’re down there,” he says. “We know they’re there. They’re just hiding.”

Even a fleeting visit can leave an impression when conditions are right.
dinosaurs

Of course, they are deep underground and came from 75-ton titanosaurs.
Video