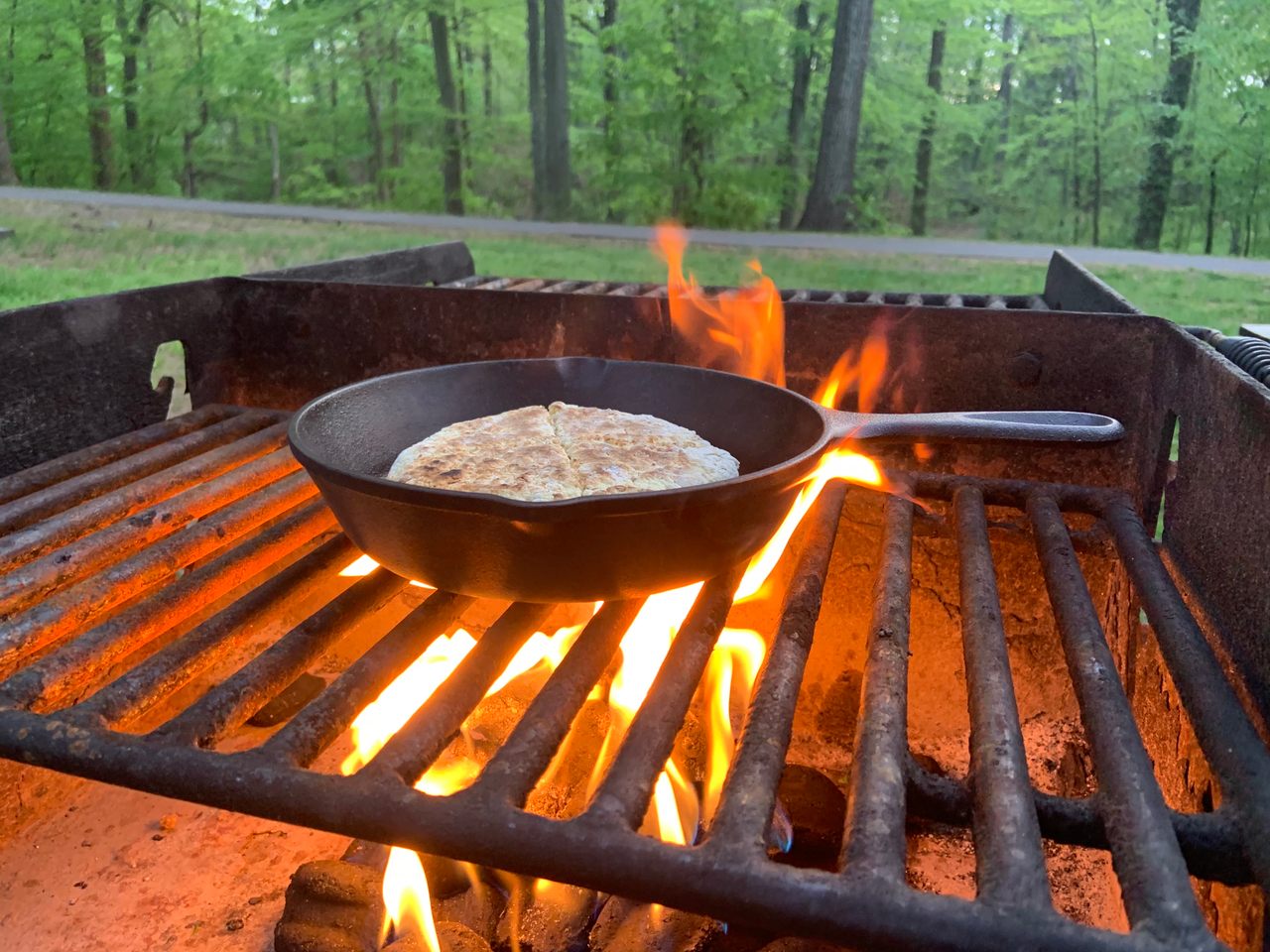 You can cook the bannock on the stove or, in the true spirit of Beltane, over an open flame. Sam O'Brien for Gastro Obscura
In This Story
Place

It’s springtime in the Scottish Highlands and a bonfire blazes against the night sky. A group stands before the flames, passing around a hat containing slices of bannock, or griddled oatcake. Each person plucks out a piece, until one unfortunate soul unfurls his fist to reveal a charcoal-daubed morsel. Fate has declared him the cailleach Beal-tine, a scapegoat who must be sacrificed. Some of his companions grab him, pulling him toward the fire. For good measure, they might even lay him out and prepare to draw and quarter him. At the last minute, when it appears his sacrifice is imminent, a group of rescuers rush in and save him.

Such was the 18th-century ritual of the burnt Beltane bannock and the cailleach Beal-tine. The mock sacrifice is one of several bygone traditions associated with the ancient Celtic festival of Beltane. Celebrated from the eve of April 30 through May 1, Beltane marks the beginning of summer. When many people picture similar May 1, or “May Day,” festivities, they might imagine dancers around a maypole and flower-clad May Queens. While modern-day Beltane celebrations incorporate some of these elements, early Beltane Eve nights were more intense affairs, filled with sky-licking flames, purification rites, magic, and offerings to powerful beings. The festival came at the precipice to a crucial time: With months of summer hunting and farming ahead, it was essential to supplicate both natural and supernatural forces. Like its winter-welcoming fellow festival, Samhain, Beltane was believed to be a time when the barrier between the mortal and the magical lifted.

Due to the lack of written Celtic records, we have little information about the first Beltane festivals. The earliest recorded mention of Beltane appears in an early medieval Irish glossary, centuries after its theorized origins, and the most substantial documentation of Beltane-related traditions across Scotland, Ireland, and Wales occurs from the 1700s through the early 1900s. Even though much of the charcoal-smeared bannock’s significance is a mystery, these records highlight the griddled oatcake’s auspicious importance on the holiday. On the Isle of Mull, 18th-century Scottish writer John Ramsay noted, farmers milked their cows through a hole in their bannocks for good luck on Beltane. Meanwhile, in the Highlands region of Perthshire, Scots baked a scalloped bannock—perhaps to mimic the shape of a sun—and tore off pieces that they’d toss over their shoulders with attendant wishes for crops or livestock health: “Each [is] dedicated to some particular being, the supposed preserver of their flocks and herds, or to some particular animal, the real destroyer of them,” Thomas Pennant wrote in his 1769 book, A Tour of Scotland. “‘This I give to thee, O Fox, spare thou my lambs; this to thee, O Hooded Crow, this to thee, O Eagle!’”

Sarah Barr grew up around Perthshire, where these superstitious Beltane bannock rituals once took place. However, since they largely disappeared from Scotland by the turn of the 20th century, Barr says she “never saw hide nor hair of them.” Still, she was drawn to the traditions surrounding Beltane and today helps organize Edinburgh’s annual Beltane Fire Society festival, a modern celebration that typically involves a dramatic procession and large bonfire atop the city’s Calton Hill. (No one is sacrificed, not even in fake, theatrical fashion.)

Barr, who makes her own bannock with leek-infused butter, notes that bannock-based symbolic sacrifices may have their roots in an earlier, more desperate time, when sick cows or a short drought could signal doom for a community. “I do wonder if traditions like the cailleach Beal-tine have been sort of, not sanitized, but they no longer carry the same fear and weight behind desperately having to make sure your family survives by sacrificing someone in your community. But it still has that vein of ‘Well, now Jimmy, you’re the cailleach Beal-tine, don’t let our crops die.’”

Although archaeological evidence suggests that the Celts did perform human sacrifice, scholars have yet to unearth a body or artifact that confirms with certainty that they performed such a rite on Beltane. However, one archaeologist and Celtic scholar theorized that bannock, Beltane, and human sacrifice may have collided in one famous Iron Age corpse.

In her book, The Life and Death of a Druid Prince, the late archaeologist Anne Ross investigated the Lindow Man, a body miraculously preserved in a peat bog in Cheshire, England. Due to the seemingly methodical execution of his injuries (a massive blow to the head, a broken neck from garroting, and stabbing wounds) as well as his manicured hands and healthy body, many scholars believe the Lindow Man was a man of high status who was sacrificed. Thanks to the ancient body’s incredible, preserved condition, scientists were able to examine the Lindow Man’s stomach contents and determine his last supper: mistletoe pollen and a griddled, unleavened flatbread. Since researchers noted the bread had been charred, Ross speculated that the Lindow Man was an unfortunate burnt bannock recipient who was sacrificed in the name of a good harvest.

But archaeologist and Celtic scholar Miranda Aldhouse-Green cautions against making too many imaginative leaps when it comes to the Lindow Man, especially the exact rationale for his death. “I think the trouble is that it’s quite tempting with this subject to take the inferences and interpretation too far,” she says. “When you’re dealing with the Iron Age in Europe, you don’t have written records except for the Romans, who were talking about these ‘Other’ people.” One enduring example: In The Gallic Wars, Julius Caesar mentions seeing an alleged human-shaped wooden scaffold that burned human sacrifices trapped inside. (The chilling scene inspired both the classic 1973 horror film The Wicker Man and a hilariously horrible 2006 Nicolas Cage remake.) Aldhouse-Green continues, “We don’t have the voice of the indigenous population of Britain at the time and therefore we don’t have written explanations of what their rituals were about. It’s all secondhand.”

Still, Aldhouse-Green hypothesizes that the Lindow Man may have been sacrificed in dramatic, communal fashion, somewhat similar to the mock rituals of Beltanes centuries later. “It’s a flat landscape so things would’ve been visible for miles,” she says of the peat bog where the Lindow Man was killed. “I’d suspect what you’d have is a procession possibly going on for miles with bells ringing and music playing that would be calling people out of their houses to join the procession. That could’ve taken days. It could’ve covered mile after mile and all the local people would hear this and come out to see what was going on then join in.” Although she’s careful not to state anything with certainty, she speculates that he may have been sacrificed to stave off the advance of Roman soldiers.

With the rise of industrialized agriculture and evolution of science, the terrifying unpredictability of changing seasons is largely a thing of the past—and so too are the superstitious rituals that attended the change of seasons. But the world remains terrifyingly unpredictable: With the dangers of COVID-19, the Beltane Fire Society has cancelled its on-site event this year and instead recorded a pretaped performance now available on YouTube. Still, Barr plans to make bannock and, if it’s not crowded, enjoy a quiet moment on Calton Hill to celebrate Beltane. “I’ll bring some tea, I’ll bring some bannock. And I’ll probably throw some for the crows.”

For added symbolic heft and flavor, some Scottish cooks coated their bannocks in caudle, a custard-like batter of eggs, milk, cream, and oats. According to Scottish folklorist F. Marian McNeill, each core caudle ingredient represented a wish for the months ahead: eggs and dairy for plentiful hens and cows, and oats for a bountiful harvest. For added supplication, a libation of the caudle would be poured onto the ground before spreading it over the cake.

1. Sift the flour, salt, and baking soda together in a large bowl, then whisk in the rolled oats and oat flour (or ground oats).
2. Add the buttermilk, gradually incorporating it until the dough is soft. As soon as it’s starting to get a bit sticky, stop adding the buttermilk, even if you haven’t used the whole amount yet.
3. On a floured surface, turn out the dough and shape into a circle. Gently work it; do not knead it.
4. Cook the dough in a pan on medium heat until the underside is browned, then flip over and repeat. Set the bannock aside.
5. Heat the milk or cream with the oat flour (or ground oats) in a nonstick saucepan. Simmer until it begins to thicken.
6. Beat the eggs, then pour them into the stovetop mixture, adding in the honey and seasonings to taste. Continue simmering, and stirring, for about five minutes.
7. Remove the caudle from the stovetop. Add a few splashes of ale.
8. Pour part of the caudle over your bannock. Don’t forget to pour part on the ground outside as an offering.
9. If you’d like to play a game of mock-sacrifice, slice off a piece of bannock and return it to the pan. Cook until charred. Slice other pieces of the bannock of equal size, then add them all to a hat. Have your friends close their eyes and pick out pieces. When the cailleach Beal-tine pulls the blackened portion, open the oven door and call for your friends to bring the crone to their fiery doom. At the last minute, if you’re feeling generous, spare them. Happy Beltane!

Found in an empty tomb, these sweets have staying power.
festivals

History and legend collide in the story of one seriously suggestive sweet.
ancient

The infamous ‘Don’t Ask Cake’ is better than it sounds.
Video • PinDrop

Now home to a drinking establishment, this building has a macabre history.
Edinburgh, Scotland

One of Edinburgh's oldest pubs hides a 19th-century skittles alley in the back.
Edinburgh, Scotland

Come for the oysters, stay for the priceless art honoring inventors across history and Scotland's favorite outdoor sports.
Edinburgh, Scotland

This historic pub has maintained much of its 1906 decor, including a small sequestered room for women, where orders were slipped through a tiny window.
Edinburgh, Scotland

Near the former site of numerous witch burnings, this lavish Edinburgh mainstay pays homage to Scotland's brutal history.
Want to see fewer ads? Become a Member.
From Around the Web
THE GASTRO OBSCURA BOOK
Taste the World!
An eye-opening journey through the history, culture, and places of the culinary world. Order Now