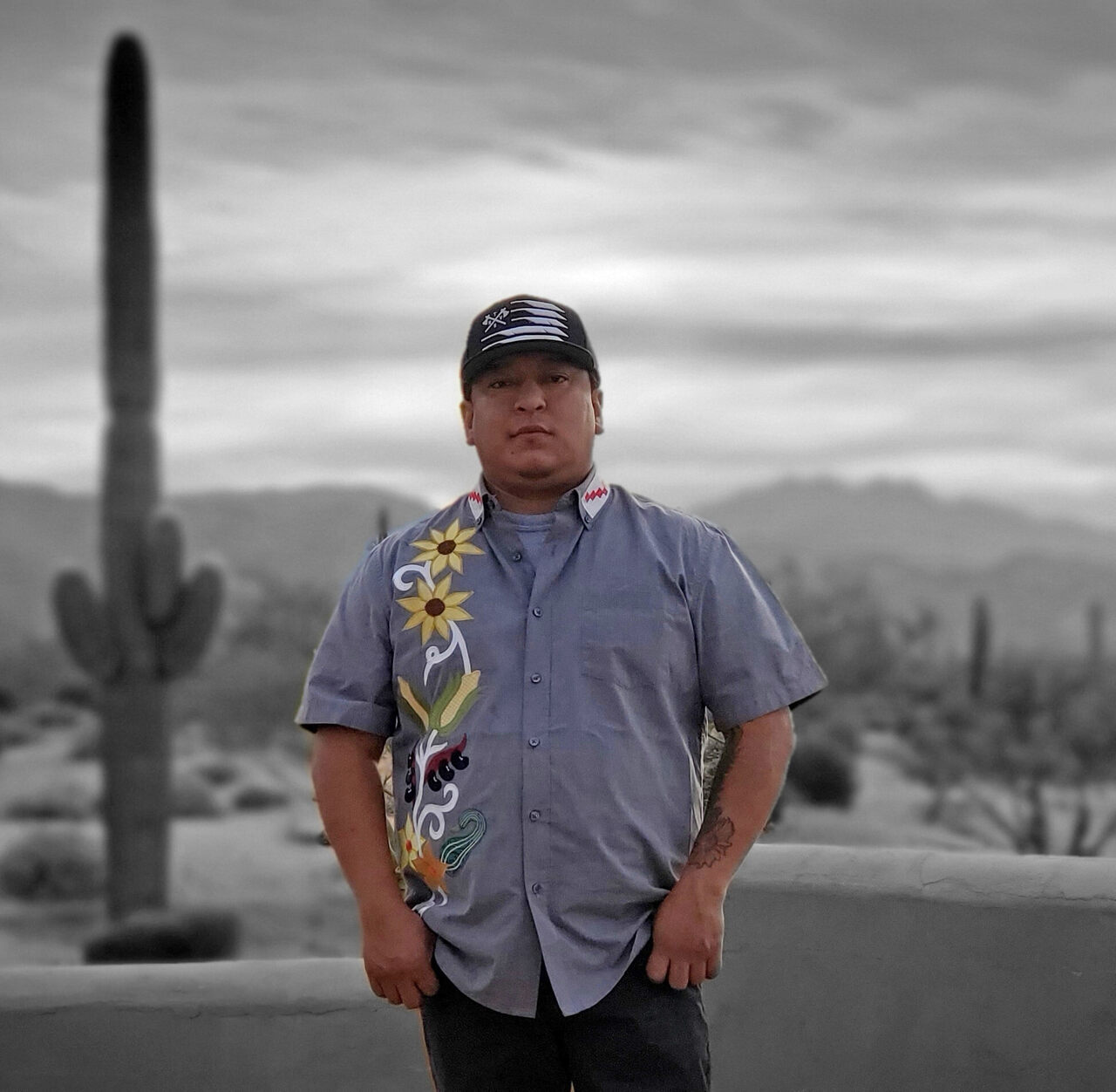 What’s in your kitchen pantry? If you answered quinoa, green beans, or potatoes, you have, perhaps unbeknownst to you, been eating Native American heritage. “They might not know they have indigenous foods in their cupboard: might be canned corn, canned beans, squash,” says Brian Yazzie, a Twin Cities-based chef and food activist from the Navajo Nation, of his YouTube channel’s at-home viewers. But thanks to the ingenuity of indigenous farmers, who domesticated these crops over millennia, much of the world relies on Native American staples when times get lean.

Now is one of those times. Since mid-March, when more than a quarter of the United States population was directed to stay at home due to the novel coronavirus, food insecurity has intensified for many American households. Public-health experts recommend social distancing as one of the best ways to fight the COVID-19 pandemic. But for those stuck at home, especially the elderly or vulnerable, for whom a simple trip to the grocery store could mean a life-threatening brush with the virus, this poses a unique culinary challenge: How can we stretch pantry stables into nourishing meals?

Brian Yazzie, co-owner of Intertribal Foodways, an indigenous culinary and wellness organization that offers catering and cooking classes, is turning to Native American cuisine for an answer.

Like most American chefs, Yazzie canceled his in-person engagements for March and April. So he is bringing Native food directly into community homes. Yazzie has moved much of his operation online, offering how-to videos and one-on-one remote classes for home cooks looking to learn about indigenous American cuisine while turning their pantry staples into a feast. And he’s teamed up with the staff of the Minneapolis American Indian Center’s Gatherings Cafe to make and deliver meals to Native elders in the Twin Cities area. “Being an indigenous chef and being able to use my skills and network to help those who are in need in this time is keeping me sane,” Yazzie says.

Community efforts like these are particularly important for Native Americans, says Yazzie, because of the profoundly traumatic history of epidemics in indigenous communities. After European colonization, epidemics of smallpox, plague, and influenza devastated indigenous Americans. According to a recent estimate, 60 million people inhabited the Americas in 1492. By the 1600s, pandemic and colonial violence had killed 56 million people. That’s 90 percent of pre-Columbian people, or 10 percent of the world’s total population—the largest genocide in known history.

The effects of colonialism continue to plague Native communities, putting indigenous Americans, including Yazzie’s Navajo Nation, at particular risk from the novel coronavirus. One in three members of the Navajo Nation has diabetes or prediabetes, a condition that increases the risk of serious complications due to COVID-19, but only one-fifth of the Nation’s 23,000 elders have access to medical care. Native Americans lack plumbing at 19 times the rate of white Americans, making it nearly impossible to follow public-health advice about sanitation. And widespread food insecurity makes social distancing at home particularly difficult. There are only 13 grocery stores for the approximately 200,000 residents on the Navajo Nation, which covers 27,000 square miles in the American Southwest.

“The Navajo Nation is putting out a call to stay home, but it’s hard to do that when the nearest gas station or grocery story is hours away,” says Yazzie. As of March 25, there have been 69 identified COVID-19 cases on the Navajo Nation.

Yazzie grew up on the Navajo Nation, and moved to St. Paul in 2013 with his partner and the co-owner of Intertribal Foodways, Danielle (Hoonmana) Polk. “I had to leave my reservation to get a job or to get an education,” he says. He enrolled in culinary school in St. Paul, and his love of cooking brought him back to his roots. “I was looking through cookbooks, and I realized that not only have my ancestors survived Manifest Destiny and colonization, but they still have ingredients of the Americas,” he says. Indeed, while Native people and food are often erased in elite culinary establishments, their agricultural heritage is fundamental to the world’s most rarefied cuisines. “You can’t have Italian cuisine and French cuisine without squash, beans, corn, or even potatoes,” says Yazzie.

Most non-indigenous Americans associate Native food with dishes such as fry bread and Indian tacos. But, Yazzie says, “About 50 percent of indigenous tacos are indigenous to North America.” The rest, like the wheat flour, lard, and ground beef, became incorporated into indigenous American diets during colonization, part of a forced alienation from traditional food and agriculture that many blame for the current high rates of diabetes and heart disease in Native communities.

Yazzie acknowledges that many indigenous Americans, including elders forced to grow up in residential schools, have fond associations with foods like Indian tacos. But he chooses to focus on pre-colonial ingredients, combining pan-American foods into contemporary dishes such as bison heart tacos and roasted acorn squash with agave. Last year, he started featuring recipes like these on his YouTube channel, in an attempt to make his work more accessible to Native communities who lacked the resources to host a professional chef. “I started thinking about, how can I reach out to this community besides sending a recipe?”

This digital pivot has helped Yazzie reach community members during the coronavirus outbreak. Rather than his usual produce and game-heavy recipes, such as wild rice and bison liver and squash, corn, and tomato sauté with seared bison, Yazzie is taking requests from social media followers looking to cook with pantry staples. And he’s bringing his work directly into the homes of Native elders in the Twin Cities.

Each day, Yazzie and his fellow chefs meet at the Minneapolis American Indian Center’s Gatherings Cafe, check to make sure none of the staff have symptoms, don masks, and get to work. In their first week of operations, the chefs have been utilizing ingredients left in the Gatherings pantry after the Cafe closed in support of social-distancing measures.

The meals they’ve crafted aren’t what you’d typically associate with “clean-out-the-pantry” cooking. “Yesterday we made a bison and kale soup, and we added a sweet potato mash,” as well as organic local melons and in-house bread, says Yazzie. The next day, the menu included slow-braised turkey and mixed greens with homemade pickles and maple-candied sunflower seeds.

Community response has been eager, even joyous. “I reached out to the network I had and asked if anyone was available to donate food,” Yazzie says. Within hours, community members brought an “overwhelming” amount of food, including a cache of Bloody Butcher and Oaxacan Green corns, both heritage corn cultivars. “Seeing the resiliency from the Native community here in the Twin Cities brings me hope.”

With bison and beans, squash and sweet potatoes, Yazzie brings this hope to his viewers. If a pandemic is a reminder of the fundamental permeability of being human—viruses, after all, know no borders between nations or bodies—it’s also a reminder that healing, too, is collective. “Knowing that an elder has been fed, knowing that tomorrow they will be seeing a hot meal,” says Yazzie, “That’s what’s keeping me going.”

You can follow Chef Yazzie and find his recipes on YouTube at Yazzie The Chef TV, and request remote cooking lessons at the Intertribal Foodways website.

Join the conversation about this and other stories in the Atlas Obscura Community Forums.

Help us keep them coming by directly supporting Atlas Obscura.
Become a Member
$5/month $10/month $20/month
See All Membership Options
Already a part of our membership program? Sign in.
No Thanks
Keep Exploring
poison

“If you can’t gather shellfish then you’re going to starve.”
farms

The Promise and Perils of Resurrecting Native Americans’ Lost Crops

For centuries-old bars, a pandemic is nothing new.
beer

A strict lockdown has meant a spike in homebrewing.
Video

This French Canadian classic is a specialty of the oldest continually used church in Minneapolis.
Gastro Obscura

This beef patty oozes cheese from within.
Gastro Obscura

Around British Columbia's Osoyoos Lake, community efforts have revived the population of a fluorescent fish.
Related

The Coronavirus Is Bringing Back a 1,000-Year-Old 'Cheese' in Japan

Once, it was considered fit for the emperor.
Read more