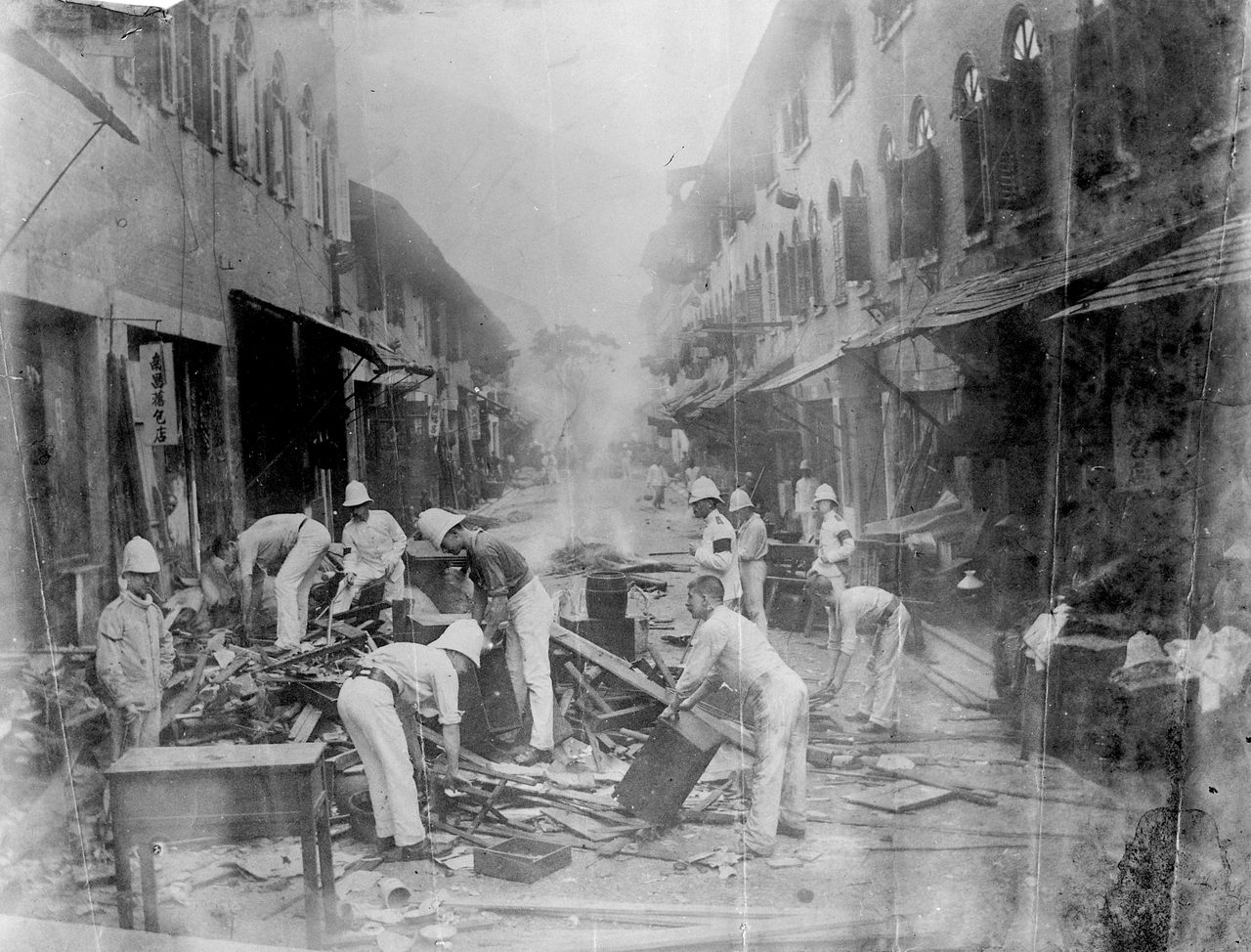 The Shropshire Regiment amid the destruction of homes in Hong Kong, 1894. Wellcome Images/ CC BY 4.0
In This Story
Destination Guide

As COVID-19 stops the world in its tracks, a 19th-century pandemic still haunts Hong Kong’s Sheung Wan district. Nearly 130 years ago, the neighborhood was an epicenter of one of the deadliest pandemics on record. Like many former plague hotspots, the area still carries with it the weight of that tragedy.

In 1894, the waterfront city was a British colony and vital port of trade. As such, it experienced a mass influx of mainland Chinese laborers, from tradespeople to servants, who came to the city in search of employment. These almost 200,000 individuals settled primarily in Sheung Wan, then known as Tai Ping Shan or Taipingshan. In fact, the British had relegated the Chinese community to the area as early as the 1840s in order to develop land elsewhere.

At only about a half square mile, the impact of so many people on such a small area caused the neighborhood not to grow as much as distend, and before long families and workers were living on top of each other in unspeakably squalid conditions. Possessions, people, and even pigs shared single rooms, as did cattle, with calves often slaughtered in situ upon reaching maturity.

This was in dramatic contrast to the lives of the city’s European residents, who lived in comparative splendor just miles away. As Edward Marriott explains in his book, Plague: A Story of Science Rivalry, and the Scourge That Won’t Go Away, “in the ‘Peak District,’ on vast sprinklered lawns, in front of stuccoed palaces, lifting tumblers of fresh-squeezed lemonade from silver trays, women in white dresses spent the afternoons playing croquet.”

Taipingshan, however, was all but primed for tragedy and in early 1894, that tragedy arrived in the form of the bubonic plague. The area “was not only a potent reservoir of everyday illness, but a place where contagion, once started, would prove impossible to stop,” Marriott writes.

Fever, swollen glands, delirium, and even black tongue were only a few of the symptoms of the disease, the mortality rate of which was thought to be as high as 90 percent within Chinese communities. Just as the brutal physical ravages of the plague took their toll, there also developed a secondary, figurative kind of scourge, one that magnified the sociological schism between the ruling Westerners and the Chinese, and which led to mutual distrust and hostility between the two cultures.

Although the true carriers of the disease were most likely fleas and rats brought to the region on opium ships, the blame for the plague’s arrival was placed swiftly on the shoulders of a specific group. “All that was needed now was a scapegoat, and the Europeans were of one voice: immigrants,” Marriott writes. “The only solution—propounded in language beloved of xenophobic despots down the ages—was to ‘purify’ the island by expelling the infected.”

In May of that year, an aggressive assault began on the stricken district. A team of mostly British soldiers called the Shropshire Regiment, also informally referred to as the “whitewash brigade,” was assembled for a door-to-door inspection, disinfection, and in some cases, total destruction of homes. Those dwellings in which plague victims were found or even suspected were torn apart at the seams and the bodies of the dead immediately removed. Such was the fear of these armies that when they arrived at one particular dwelling, they found the body of a deceased plague victim propped up at a mah-jongg table as if actively involved in play. By the time these “inspections” were finished, some 7,000 people were displaced with over 350 homes destroyed.

The very same month a ship called the Hygeia was sent out less than a mile from the harbor. Billed by the British as a floating plague hospital, it was essentially just another method by which to isolate Chinese victims of the disease.

But death was not the end of the indignities the Chinese community faced during this pandemic. When managing the bodies of plague victims, the British violated virtually all Chinese rituals and traditions associated with death and especially burial. The philosophical crux of these beliefs is that in order to avoid suffering in the next life, a person must be buried properly in this one. A proper burial consisted, essentially, of three things: an intact body, a coffin, and an interment in one’s home village. As Zhijian Qian, assistant professor of art history at the New York City College of Technology explains, to many Chinese people, being buried in one’s homeland, is “like falling leaves returning to their roots, where we will eventually be reunited with our ancestors.”

As virtually any account of the epidemic agrees, bodies of the dead that were taken from both the condensed Taipingshan area and the Hygeia were treated by the British more as potential disease carriers than sacred entities. Piling up in the streets, corpses were often disposed of in group “plague pits” or, in some cases, simply abandoned. When they were buried, often in cement-covered graves on the outskirts of the city, the goal was expediency over ceremony.

Impelled not just by the prospect of death itself, but by the threat of being denied a proper burial, close to 100,000 Chinese laborers began to return to their hometowns in a mass exodus, afraid that if they were to fall victim to the disease, their bodies would not be allowed to return. Not surprisingly, the evacuation caused the city to come to a virtual halt, leaving the Europeans to fend for themselves.

If anything helped ameliorate the situation, it was perhaps the Tung Wah Hospital. As Michael Ingham, author of the book Hong Kong: A Cultural History, explains in an email, the hospital provided free coffins to plague victims and helped facilitate the return of their bodies to their native villages. “The majority of the impoverished and destitute plague victims living in the Tai Ping Shan area would have been unable to manage or afford their own death preparations,” writes Ingham. Re-named Tung Wah Coffin Home in 1899, it is still in existence today, as part of the Tung Wah Group of Hospitals.

After the destruction of Taipingshan, Ingham notes that the area was rebuilt and gradually became something of a center for hospitals and other medical facilities. Although the Tung Wah Coffin Home eventually moved to the Sandy Bay area, the main hospital stayed and remains in Sheung Wan, where it is responding to the COVID-19 outbreak.

Prior to COVID-19’s arrival, Sheung Wan felt more like a hotspot of activity than a hot bed of pestilence, but some locals contend there are clues to the past in these side streets. Some assert there are actual spirits still left. John Fairman, founder of Honeychurch Antiques, formerly located on Hollywood Road, one of Sheung Wan’s main thoroughfares, says many feel the treatment of the plague victims’ bodies “left many unhappy ghosts in the neighborhood.” Others believe the coffin shops in the area may be tied to this event in history.

Regardless, whether real or imagined, the ghosts of the epidemic may not be here for long. The area’s rents have skyrocketed with its popularity and it’s not inconceivable that soon shops selling coffee will take over ones selling coffins. If and when they do, they’ll take with them a tragic, profound symbol of both the physical and psychological suffering that occurred here.

It reshaped the city and inspired a revolutionary vaccine.
quarantine

The Black Death in Venice and the Dawn of Quarantine

The Chinese Hospital in San Francisco is still one-of-a-kind.
medicine

The history of unpleasant odor, or miasma, has unexpected relevance in the time of COVID-19.
Video