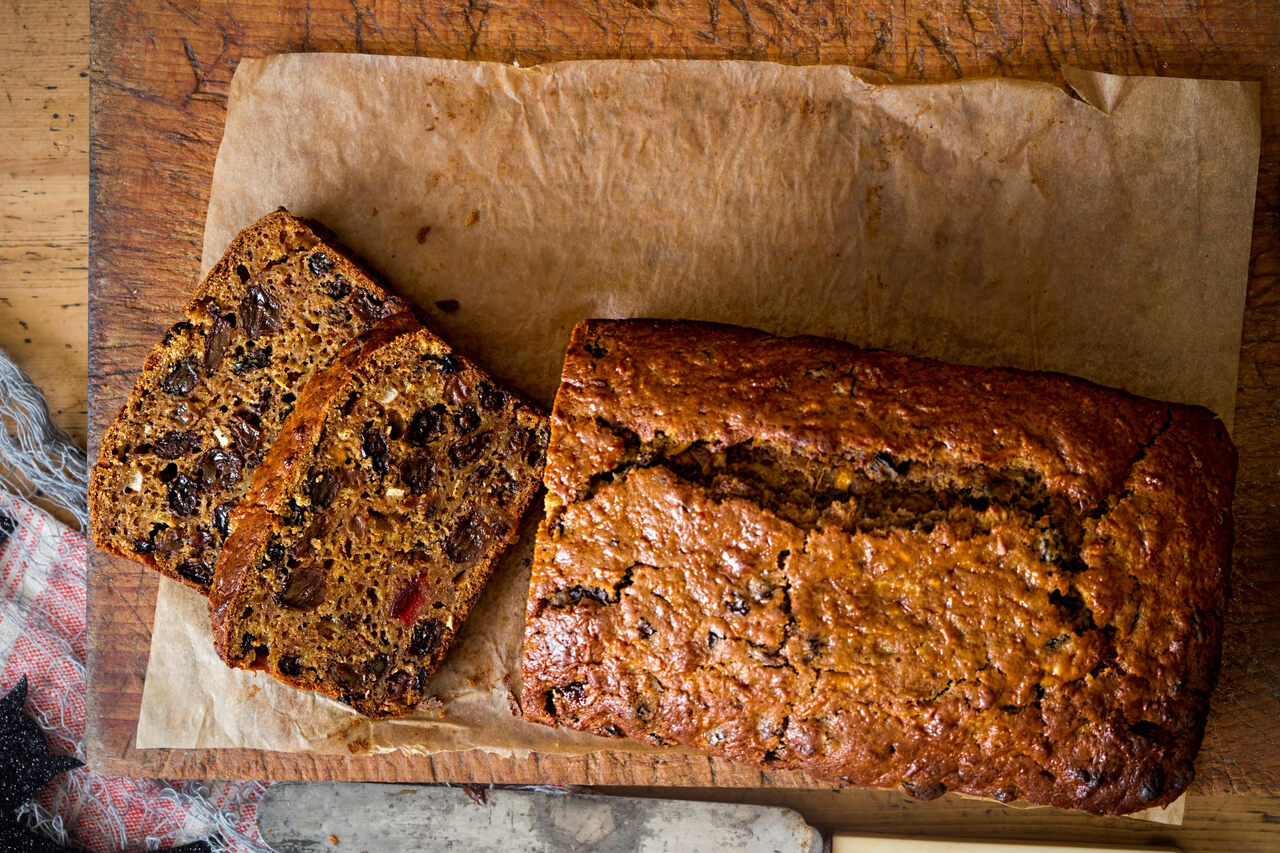 This bread comes with a side of fortune-telling. Bartosz Luczak / Alamy Stock Photo

With active dry yeast in short supply, many home-bakers who are sheltering in place have succumbed to the siren song of sourdough. But people have produced bread without yeast across history, cultures, and climes, leaving an incredible array of styles to choose from when your leavening options are limited. From the sticky-sweet steamed bread of Colonial New England to the Icelandic rye that rises in a hot spring, here are seven breads that prove you don’t have to track down that elusive packet of yeast to make something extraordinary.

The relationship between brewing and baking dates back centuries and is especially prevalent within European cookbooks of the 1700s and 1800s. Brewers would skim the “barm”—a yeasty foam generated during fermentation—from the tops of their brewing vats and give the frothy mixture to bakers to leaven their dough. (This is why some old bread recipes, such as this one from the 1855 edition of An Encyclopedia of Domestic Economy, measure yeast in “pints.”)

But you don’t need to take up home-brewing to make beer bread. The carbonation provided by a 12-ounce can of beer helps get the job done. Simply start with a bland brew (think Miller Lite, PBR, or anything that won’t have a strong impact on the flavor), then add flour, baking powder, salt, and sugar. If using self-rising flour, you don’t even need the baking powder and salt. Try the New York Times’ recipe for a tender loaf that still packs yeasty notes.

This sweet fruit bread takes its name from barm and the Irish word for “speckled.” Originally, it was made with the yeasty foam, but most modern renditions use chemical leaveners. Of course, when it comes to yeast-less baked goods from the Emerald Isle, Irish soda bread is the most obvious choice. But why not try this darker, more ominous cousin? In addition to raisins, barmbrack comes speckled with portents.

Barmbrack is particularly popular during the Celtic festival of Samhain, which traditionally marked the end of harvest season and the transition to the darkness of winter. Samhain was also believed to be a time when the barriers between the living and the dead dissolved, and spirits roamed free. Superstitions carry over to the kitchen during Samhain, as well. In addition to cinnamon, nutmeg, and dried fruit, bakers pepper their barmbrack with four symbolic trinkets. Discover the ring in your slice, and you’re destined for marriage. Bite into the bean, on the other hand, and your romantic future doesn’t look so bright. Taste metal, and you’re in luck (provided you didn’t swallow): You’ve got the coin, so expect prosperity soon. But chew on the cloth, and brace for tough times.

Try this rich, sweet barmbrack recipe from Saveur, which includes tea-soaked raisins and currants. The world has had enough ill portents lately, so maybe just fill yours with coins and rings.

Bubbling beneath Iceland’s surface is an intricate network of volcanic hot springs. A dying breed of bakers harness this geothermal power to create a style of rye bread known as hverabrauð. To make this “hot spring bread,” Icelanders start with a dough consisting of rye flour, all-purpose flour, baking powder, milk (or, if using baking soda, buttermilk), salt, and sugar or a sweet syrup. With their mixture sealed in a covered pot, they set off for the nearest spring, dig a hole in the sizzling sand, and bury the container among the waters that gurgle below. After unearthing the pot 24 hours later, they should find a gently-steamed, fully-formed loaf.

If you don’t have hot springs nearby, you can very loosely mimic the environment by covering your dough and leaving it overnight (about eight hours) to slowly cook in a 200-degree oven. The resulting rye should be dense, nutty, and chewy.

Try this recipe that Saveur excerpted from Icelandic Food and Cookery, which uses the oven method. If you don’t have the recipe’s requisite buttermilk and want to avoid a trip to the store, try stirring in one tablespoon lemon juice or white vinegar for every cup of milk and let it sit for 10 minutes or so, until it thickens and curdles just a bit. If you don’t have the golden syrup, swap in honey or molasses (cutting the latter with maple syrup if you want a sweeter flavor). Before tearing into an entire loaf, beware: Its nickname, þrumari, or “thunder bread,” is no misnomer. It references the intense way the fiber-heavy food can rumble through one’s digestive system.

The story of this niche New England favorite begins with 17th-century Pilgrims. Forced to adapt the recipes of their British homeland to the New World, these settlers made adjustments based on local resources. When it came to “thirded bread,” a cost-cutting recipe that traditionally combined rye, wheat, and oat flours, that meant swapping in cornmeal for oats and adding in the sweet upgrade of molasses. While some baked the bread in a hearth, others choose to steam it. The dark, moist, sticky-sweet product of the latter approach came to be known as Boston brown bread.

In the early 1800s, a new invention that would forever change the food industry also changed the recipe for Boston brown bread: the tin can. Home-bakers turned to coffee or baking-powder cans to steam perfectly-formed cylinders of their bread, which continued to be popular well into the 1900s. Nostalgic New Englanders might remember growing up pairing slices with baked beans and hot dogs. In fact, the combination is so beloved that B&M, a Maine-based company that’s been making canned baked beans since the 1920s, is one of the few producers that still sells premade canned bread.

Making your own canned brown bread is easy. Try this recipe from Serious Eats. If you don’t have buttermilk, use one of the substitutions mentioned in the hverabrauð profile above. Grease the inside of the cans and, when the bread is ready, be sure they’re open at the top and at the bottom to help coax the loaves out.

More of a dumpling than a traditional bread, this Cherokee staple relies on two of the three “sisters” that form the base of Native American cuisine: corn and beans.

The historic method for making the bread involves soaking corn kernels in a lye-rich mixture of hickory ash and water, then grinding and working the hulled, washed corn into a dough. Modern cooks, however, can skip ahead by purchasing a premade form of this corn flour known as masa harina. (It’s crucial to a good tortilla.) The flour gets blended with water, cooked brown beans, and a bit of the liquid from the bean pot, then shaped into flat, oval dumplings.

Like canned bread, this recipe relies on steaming. If you want to be a stickler for authenticity, wrap the dumplings in hickory leaves, corn leaves, or corn husks, tie the pouches shut, and steam the lot for an hour. But those in a pinch can swap in aluminum foil for the leaves. You’ll miss a bit of the earthy flavor imparted by the plants, but still get a close approximation of the real deal.

The resulting bread is a soft, moist, slightly savory taste of Cherokee history. Try this recipe from Nico Albert, a Cherokee chef based in Oklahoma.

Carta di musica has no need for the rising effects of yeast: It’s supposed to be as flat as possible. The Sardinian bread’s name comes from the fact that bakers keep rolling out the dough until it’s thin enough that you could read a sheet of music through it.

As the discs of dough start to puff up in the oven, bakers continuously slice them into halves until they become thin and cracker-crisp. The dried-out bread can last for months, ideal for the Sardinian shepherds who snacked on pieces as they wandered with their flocks.

While you might not be wandering anywhere for a little while, you can still try King Arthur Flour’s recipe for carta di musica. For ideal results, the recipe requires semolina flour, all-purpose flour, water, and salt, but King Arthur also offers substitutions (along with associated caveats) depending on what ingredients you might have on hand. Pair your crisp bread with wine and cheese, and imagine you’re traipsing through the Sardinian countryside.

Popularized by pioneers in 19th-century Appalachia, this highly unusual bread also earned fame as the star of what the West Virginia Medical Journal declared “perhaps the most macabre experiment in culinary history.”

How can a bread be macabre? That lies at the heart of what makes salt-rising bread unique. While yeast-leavened loaves rise with the help of carbon dioxide, salt-rising bread gets heightened by hydrogen. Creating that hydrogen are microbes that bakers cultivate by leaving a mixture of cornmeal (or sliced potatoes), boiled milk, sugar, and salt in a hot environment overnight.

Scientists eventually learned that the resulting bacteria is Clostridium perfringens, which also happens to be what causes a type of gangrene. Putting this connection to the test, one researcher actually used Clostridium perfringens from a soldier’s infected wound to make his own loaf of salt-rising bread in the 1920s. Thankfully, you don’t need a festering wound. As Gastro Obscura addressed in a recent article, you can find great injury-free recipes from James Beard and Harold McGee.

Do you know of any other breads that don’t require yeast? You can join the conversation about this and other stories in the Atlas Obscura Community Forums.

When the going got tough, the tough left recipes.
science

From crispy popovers to artful bird cakes, take a carb cruise around the world.
food

For every crisis, a recipe.
Video • Gastro Obscura

This Christmas bread is formed in the shape of the baby Jesus.
Gastro Obscura

For 40 years, Fernando Padilla has sculpted with dough.
Read more
Thanks for sharing!