The Black Death in Venice and the Dawn of Quarantine - Atlas Obscura
Want to see fewer ads? Become a Member. 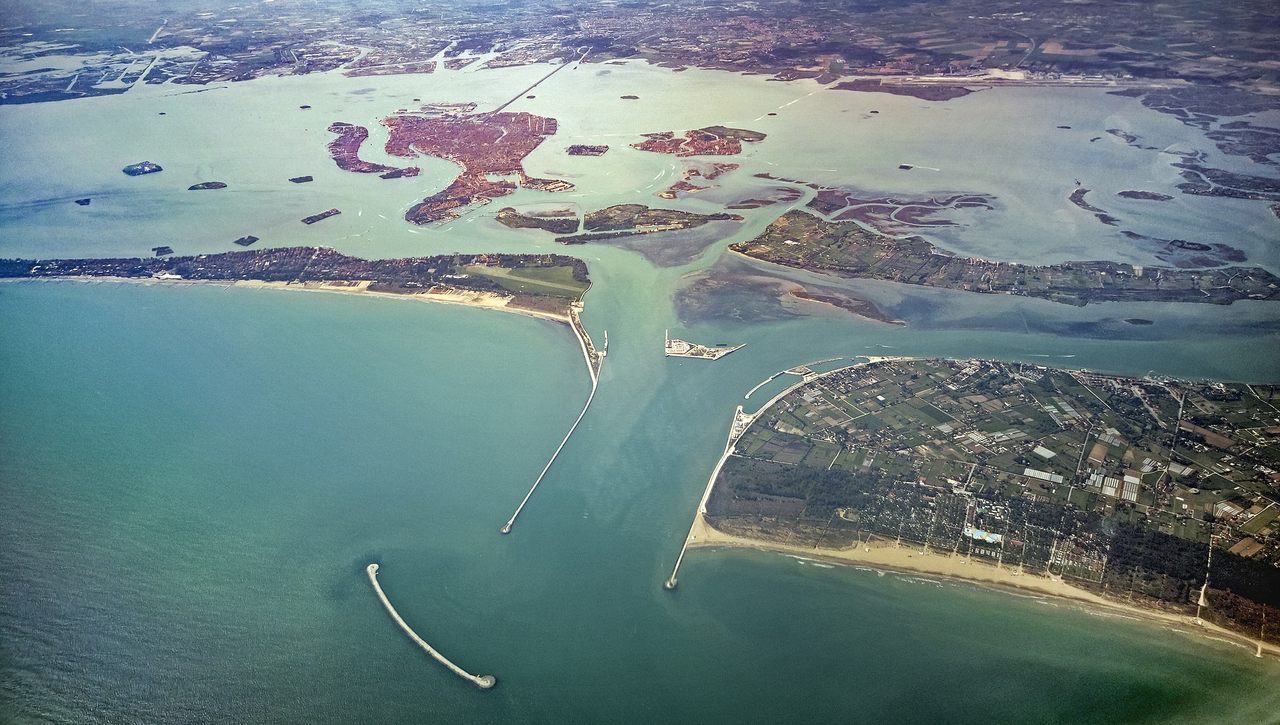 An aerial view of the lagoon of Venice. Didier Descouens / CC BY-SA 4.0
In This Story
Place

The plague quarantine island home to the alleged "Vampire of Venice."
Place

This story first appeared on SAPIENS under a CC BY-ND 4.0 license. Read the original here.

Just beyond the shores of Venice proper—a city that comprises dozens of islands—lie two uninhabited isles with a rich history. Today these landmasses are landscapes of grasses, trees, and worn stone buildings. But once they were among the most important gateways to this storied trading city.

The islands, known as Lazzaretto Vecchio and Lazzaretto Nuovo, are now yielding fascinating insights into Venice’s response to one of the most famous pandemics in history. In the mid-14th century, Venice was struck by the bubonic plague, part of an outbreak known as the Black Death that may have killed up to 25 million people, or one-third of the population, in Europe. This spread was just one of several waves of the plague to strike Northern Italy in the centuries that followed.

Venice, as a trading center, was especially vulnerable. “They saw that the only solution was to separate people, to take away the sick people, or suspected sick people,” says Francesca Malagnini, of the University for Foreigners, Perugia, who is herself a Venetian, linguist, and member of an interdisciplinary team researching Lazzaretto Nuovo. “This was the only way to protect everyone’s health and allow the economy to continue.”

Beginning in the early-15th century, the island of Lazzaretto Vecchio was designated for isolating and treating plague-stricken Venetians. Later, Lazzaretto Nuovo became a spot where ships coming from places experiencing the plague, or those with suspected sick passengers or crew, anchored. There, people and goods spent a period of quarantine before being allowed into the heart of the city. (We owe the English word “quarantine” to the Italian term for 40 days, quaranta giorni.)

Together, these islands were at the center of Venice’s vast public health response to the plague. Building on earlier traditions of separating the sick from the healthy, the Venetian government became the first in the Mediterranean region to systematically use large-scale methods of isolation and information-collecting to monitor and fight infectious diseases.

The effort was even more impressive given that science then could not explain how diseases spread. A germ theory of disease would not exist for another 400 years.

Today, as much of the world finds itself under various quarantine, isolation, and stay-at-home orders and facing uncertainty related to the COVID-19 pandemic, Venice’s quarantine history and the archaeology of isolation hospitals is especially relevant. Researchers’ findings echo many modern experiences—particularly where public health, policy, and economics intersect.

Venice’s municipal records have long preserved the story of the Lazzaretto islands. In 1423, the government established what later was called Lazzaretto Vecchio to house people who had the plague, and in 1468, a government decree dedicated a second island—then home to a monastery—to a new isolation hospital, literally, “Lazzaretto Nuovo.”

Vecchio offers archaeologists a handful of buildings to study. They reveal that the island was a treatment base for infected patients. There, doctors, wearing the elaborate beak-like plague masks of the period, did their best to treat the disease.

Few structures remain on Nuovo. Historical records, however, suggest Nuovo consisted of warehouses for goods, along with more than 100 rooms to quarantine sailors and crews before allowing them into Venice. A 16th-century historian, Francesco Sansovino, wrote that Nuovo’s buildings had “the semblance of a castle.”

The largest warehouse, or Tezon Grande, still stands: a long rectangular brick building lined with arched doorways and topped by a vaulted roof. According to historical records, a team of armed guards and porters worked to unload ships’ cargo into this space. “They were working hard and also risking their lives to protect the health of the city,” says Malagnini.

This team followed specific protocols for airing out and clearing goods with smoke from aromatic herbs and saltwater. They used vinegar to wash their hands after handling potentially contaminated items.

“[City officials] knew that trade and the flow of goods was not possible if health was not guaranteed,” explains Daniele Andreozzi, a professor at the University of Trieste who studies ancient port cities.

While it operated, the Venetian system involved hundreds of city officials. Prior to it, community care for the sick was relegated to charity efforts and religious orders.

It was not a temporary response to disaster but rather a permanent, government-run, continuous monitoring effort that endured until military general Napoleon Bonaparte’s conquest of the region in 1797. And that approach was necessary: The bubonic plague swept Europe repeatedly over the centuries.

Despite the city’s vigilance, monitoring the population was difficult. “The plague does not send to warn which ship it arrives on,” wrote an 18th-century Venetian health official. Officials could not check every caravan or smuggler, nor stop all wedding feasts attended by potentially infected people, Andreozzi says.

In addition, officials did not have deep medical or scientific knowledge of how the plague spread. They had no understanding, for example, of the timeframe between exposure to bacteria and the emergence of symptoms.

As a result, though some experts believe the system limited the size and frequency of outbreaks, the plague continued to ravage Venice, with outbreaks into at least the 17th century. An especially large episode in 1630 killed approximately one-third of the population in Venice and Bologna.

Archaeologists are gaining insights into the limits of the Venetian system by studying mass graves on both islands that were discovered in the past two decades. Matteo Borrini, a forensic anthropologist and lecturer at Liverpool John Moores University, has examined and studied about 200 bodies discovered on Nuovo.

Borrini explains that patients were generally bound for Vecchio. However, the remains on Nuovo reveal that, when the plague did reach the city, Venice became so overwhelmed that medical officials also sent sick people and the bodies of those who had died to Lazzaretto Nuovo.

The graves on Lazzaretto Nuovo showed signs that they had been reopened multiple times to add bodies, he said, “layering them like a lasagna.” Most significantly, the graves illustrate how the plague spared no one.

A study of the bones offers clues to the victims’ diets. Some remains came from people who consumed a lot of meat, an option only for wealthy Venetians. Others who died had dined on middle-class fare, rich in fish and vegetables. Still others ate mainly grains, typical among the poor.

“A pandemic is in many ways really a democratic event,” Borrini says. “Plague could kill anyone, more or less at the same ratio, so, in the cemetery, you also have a perfect picture of Venetian society frozen in that moment.”

Jane L. Stevens Crawshaw, author of Plague Hospitals: Public Health for the City in Early Modern Venice, notes that Venice’s quarantine history, however flawed, holds enduring lessons. “It shows, then and now, how difficult it is for a cosmopolitan trading center to escape infectious disease,” she says.

Nonetheless, Venice’s maritime quarantine became a model for other parts of Italy and the world more widely, influencing American lazarettos that quarantined incoming immigrants. Indeed, Crawshaw notes, Venice’s approach was a way for the government to put its citizens at ease.

“On a deeper level, this really shows how public health has always been about more than medicine. It’s also about politics and economics, and societal benefits, like making people feel safe,” Crawshaw says. “The quarantine system in Venice made the port seem more trustworthy and safe. It looks as though you are taking some responsibility.”

A Brief History of TP, From Silk Road Hygiene to Pandemic Hoarding

Join us for a daily celebration of the world’s most wondrous, unexpected, even strange places.
plague

It reshaped the city and inspired a revolutionary vaccine.
quarantine

Cerro Gordo has been abandoned since 1957. Now one man is social distancing there by himself.
hospitals

The Chinese Hospital in San Francisco is still one-of-a-kind.
Video