What It’s Like to Be The Namesake of a Deep-Sea Worm - Atlas Obscura
Want to see fewer ads? Become a Member. 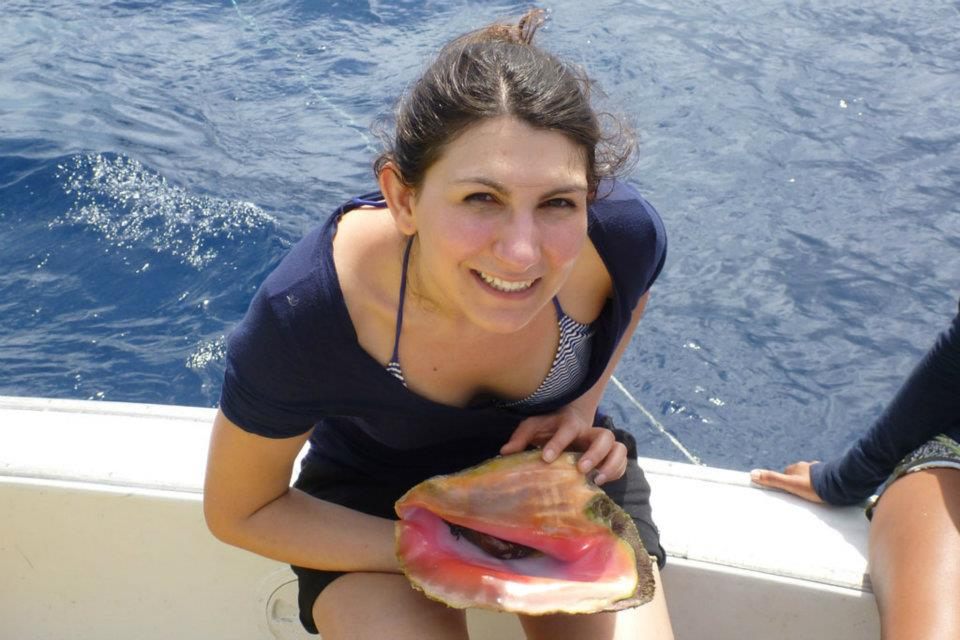 Ivvet Modinou, the namesake of a newly discovered deep-sea worm, on an earlier trip in her role as a science communicator. Courtesy Ivvet Modinou

When Ivvet Modinou got the call, she nearly fell out of her chair. A translucent, blue-green worm had been found in the deep ocean off the coast of the Falkland Islands. It was slender and miniscule—about as long as a capital letter is tall on this website. The wriggly thing had three antennae, two pairs of eyes, and fleshy, tapered protuberances sticking out on either side of its body—about as unfamiliar to us humans as any of the other odd animals that roam the ocean depths. The creature looked like a ghastly millipede, pressed into submission by some deep-sea rolling pin.

But for Modinou, a former volcanologist who became a science communicator, the worm’s discovery wasn’t even the best news. The worm was a new species in the genus Prosphaerosyllis, and was to be named for her: P. modinouae, a moniker proposed by Ben Scott, a friend of Modinou’s at London’s Natural History Museum and a co-author of the paper introducing the new species.

Now the Head of Engagement at the British Science Association, Modinou joined Atlas Obscura to talk about how species are named after people, and how it feels to serve as inspiration for the name of a deep-sea worm.

The worm in question lives off the coast of the Falklands, which is a place you have never visited. How did you end up getting this deep-sea worm named for you?

I worked for, like, 10 years at the Natural History Museum in London. My job was to work with a lot of the researchers, to help tell their stories to the visitors. Over the course of time, I got to know some of the scientists, and I was particularly close with the deep-sea team, and they found these new species.

The way naming species works is that you can’t name it after yourself. You have to name it after someone else. They always look for a new person to name it after and, well, yeah. They named it after me. I’m now a trivia question—like, “What do I have in common with Beyonce, Donald Trump, and David Attenborough?”

How did your friends and those close to you take the news?

When I was telling my friends, half were like, “What? that’s so weird.” And then the other half were like, “This is the coolest thing we’ve ever heard.” I was definitely in the second camp. I completely fell off my chair when I heard.

I’m of Cypriot descent, and my surname is going to die out. There’s me, and then my cousin has already married and changed her name. There’s no male descendent, in terms of the surname surviving. So my mom’s always like, “When’re you going to marry and give me grandkids?” And I’m, like, “Mom, our name is going to be in history forever.”

It’s that sweet thing of being able to leave that history behind in some way. It’s nice that my surname isn’t that common. That’ll get recognized as well.

You mention that you almost fell out of your chair when you heard. Was it a surprise?

I think I found out over text, a message that said something like, “How would you feel if I named a worm after you?” It was the end of last year or the beginning of this one, so it’d been quite some time. But it was an amazing surprise, especially since I spent so much time working at the museum. It was very special. Like, “I have a worm!” I was almost embarrassed by how excited I was. It’s great.

What was your first impression of the worm when you saw it?

I asked, “Is it an ugly worm? Is that why it’s being named after me?” You go into your own self a little bit, and ask yourself, “Is this an honor?” But I looked up images of the worm and thought it was so cute. It’s got these pincers, and it’s really spiky. I was like, “Yes!”

The research team would say there’s no such thing as an ugly worm. But one of the first things I worked on with the team was a group of worms called Osedax mucofloris, which means something like “bone-eating snot flowers.” That’s a literal translation. Deep-sea worms are always very elaborate and alien-looking. But [Osedax mucofloris] are beautiful, really, for zombie worms.

When I was growing up, the only worms I’d associate with were earthworms. Or in Star Trek: Wrath of Khan, I remember watching the film and they put worms in people’s ears and it somehow killed them. It was the most traumatic thing I ever watched as a child. But now, my opinions of worms have changed.

What do you see of yourself in this worm? Do you relate to this worm?

I think I’d relate to its resilience. That fact that it can survive in the deep ocean, in what I imagine are hostile conditions. It just being a surprise to people.

Of all the animals that could have been named after you, would deep-sea worm have been your first choice?

I probably would’ve gone for a moon jellyfish, because I think they’re just incredible, but I’m extremely pleased with my deep-sea worm. Some people are like, “Surely you would’ve wanted a dinosaur.” Nah.

I imagine there’s probably a pecking order now that I’ve entered a club I don’t even know the rules of. I imagine that it’s like, “Oh, but you don’t have a mammal named after you. You’re not that cool.”

Believe it or not, there’s something on social media called #WormWednesday, which is when researchers post things about their favorite worms on Twitter.

You mentioned you haven’t been to the Falklands. Do you want to see your worm in the flesh?

I’d love to see my worm in the flesh, but I’d have to go down to the deep ocean, and I am a bit claustrophobic. I’m also terrible in boats. But I am going to see it in the Natural History Museum when social distancing is over, in its little jar.

I’m not sure what its dimensions are—I’m still just reeling from the fact that I have one. It’s like when you have a child. I don’t care what it looks like, it’s mine!

See an Ordinary Jellyfish From an Extraordinary Perspective

An underwater photographer captured the stunning side of a barrel jelly, usually seen washed up on the beach as a pile of goo.
art

But giving them those crazy names isn't always fun and games.
coral reefs

One scientist argues that we should reconsider the Bobbit worm.
science

The Secrets Hiding in the Simplest Animal Brains

One researcher thinks mollusks called chitons are more complex than they seem.
Video • Object of Intrigue