The Reunion of Two Halves of a Piece of Paper Ripped Apart by Paul Cézanne - Atlas Obscura
Want to see fewer ads? Become a Member. 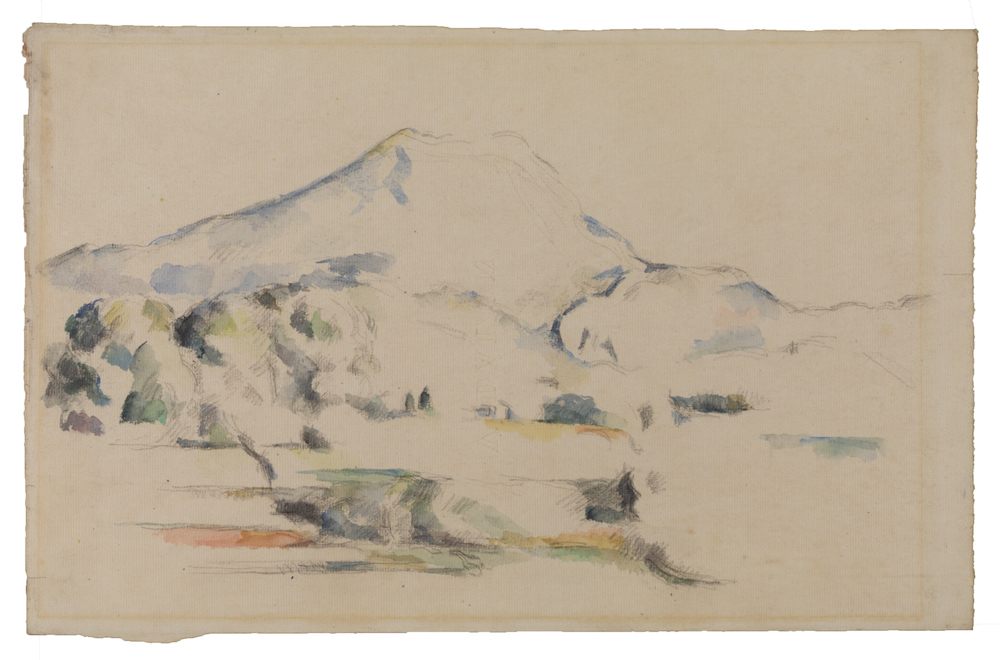 Picture Paul Cézanne—the 19th-century French painter whom Picasso called “the father of us all”—completing two tranquil, scenic watercolor paintings on the same long sheet … and then just tearing it down the middle, leaving only the sparest clue that the images were once bound together. That seems to be precisely what happened at some point in the 1880s, according to new research that looked closely at the paper on which Cézanne painted.

Fabienne Ruppen, who recently completed her PhD at the University of Zürich, spent seven years studying 1,400 of Cézanne’s works on paper, according to artnet News. So attentive was her analysis that she was able to notice similarities along the torn edges of two paintings in different collections, and then determine that they had once been on the same sheet of paper. The two landscapes—one depicts the southern French mountain ridge Montagne Sainte-Victoire, the other a nearby Provençal village—will be displayed side by side for the first time this fall, as part of the upcoming Reconstructing Cézanne exhibit at London’s Luxembourg & Dayan gallery.

Ruppen didn’t rely on the tear marks alone to come to her conclusion, however “astonishing” she says the tear patterns are. She also took note of the watermarks the original paper held—the so-called “main mark” and corresponding “countermark.” These indicated to her that both pieces of paper had been produced by the Canson et Mongolfier firm (which still exists today), in its Vidalon-lès-Annonay mill in southern France. Ruppen then visited the mill’s archives to confirm that it had, in fact, printed this specific main mark–countermark combination. Ruppen wouldn’t have made it so far if the galleries didn’t allow her to take the paintings out of their frames—which she says can take quite a bit of convincing.

There are several reasons Ruppen looked so closely at the paper. First, she says, usually the artist’s works are categorized by style or genre—watercolors, drawings, landscapes—rather than the underlying material, such as paper or canvas. Understanding this can help settle matters of chronology. “Unfortunately,” Ruppen told artnet, “almost no Cézanne drawing or watermark has a precise date.” Identifying two works of the same style and on the same medium (and on the same sheet of paper) can help establish these undated works as contemporaneous, perhaps providing insight into Cézanne’s life and career. Ruppen’s goal, she says, was to “creep into his brain.”

The implications of Ruppen’s research extend beyond these two bucolic watercolors. Clarifying the chronology, however imperfectly, also links these two works to studies Cézanne was preparing around the same time for his forthcoming “Card Players” series. It is, she says, a potential insight into what he was thinking about at the time. The artist’s paintings and drawings weren’t isolated from each other, Ruppen says, but were instead in “a very intense dialogue” and distinguished by “fluid boundaries.” Ruppen will continue her research, which she hopes will ultimately attribute each of Cézanne’s paper works to a specific sketchbook or watermark pairing, bringing yet more order to his oeuvre.

Diving Into the Submerged History of Summer, Lake Tahoe–Style

Found: The Last Piece of a Jigsaw Masterpiece by René Magritte

The fourth and final part of a painting hidden under other paintings ends an 80-year mystery.
paintings

A cardinal, a bull, a pope, and a monk walk into Yale Divinity School.
paintings

An X-ray offers a glimpse into the painter's early years.
paintings

Did Ancient Egypt Have a Pigeon Problem?

More than 3,000 years ago, the birds appeared in unexpected places.
Video