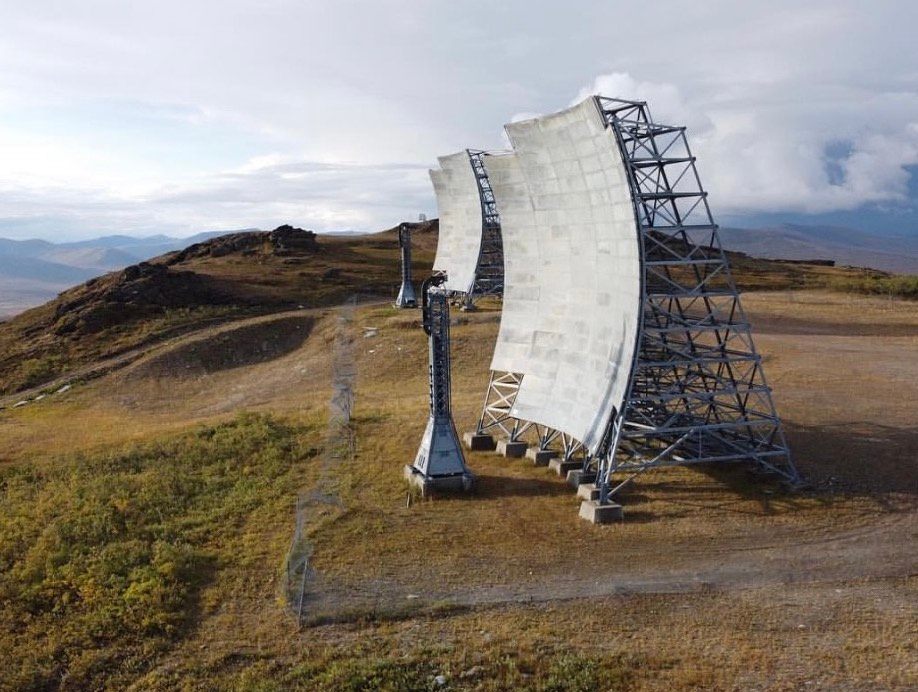 Nomehenge is desolate, but popular among locals. Casey Anderson

In the past, when Howard Farley Sr. would go fishing for king crab, he’d point the bow of his vessel towards the rough and icy waters of the Norton Sound. State mandates require that he and other Nome, Alaska, crabbers travel at least 15 miles from their town’s shore to drop their pots, but as the number of successful crustacean catches dwindled in recent years, they’d often go farther and farther afield.

Farley could track his distance from home from GPS, but after a long day at sea, it didn’t feel like he was really back until he could see the four ghostly structures atop Anvil Mountain. “On a clear day you can see them at least five or six miles out,” Farley says. “They were always there, part of Nome.”

Colloquially, they’re known as “Nomehenge” or simply “the billboards,” though, given their concave shape, one could easily mistake them for unfinished skate ramps. Sitting on the summit of the otherwise-bald 1,200-foot mountain that looms behind the town, they’re useful wayfinding aids for aircraft pilots, boat captains, hikers, and snowmobilers—particularly in the winter, when it’s dark much of the day and the snow is deep enough to obscure most other landmarks.

However, during the Cold War, the structures were antennas, conceived to serve as an important early warning system for Soviet attack. Then, the array and its now-extinct peers were known as the White Alice Communications System.

At the beginning of the Cold War, development of the Arctic was one of the primary objectives of the U.S. Air Force. At the time, Alaska had inadequate infrastructure to support those missions, with insufficient roads, ports, and railroads and the bulk of military bases located in areas meant to meet a southern rival, not one coming over the North Pole. Still, the biggest challenge was communication. If residents wanted to make a long-distance call, they needed to make a reservation to use the only circuit in town. Getting news across or outside of Alaska wasn’t an easy process, and was astronomically expensive. The White Alice Communications System changed that. It made it easier for locals to stay connected, and allowed the Air Force to warn the mainland of any incoming Russian bombers.

When the four towers in Nome accepted their first transmission in January 1958, the tropospheric antennas (a type of technology that sends and receives signals by bouncing them off layers in the atmosphere) were ahead of their time. The Nome site was a part of a larger system of 71 sites that operated by receiving radio waves from 200 miles away and hot-potatoing the message down the line to the next site. A single site required the work of dozens or hundreds of people, and called for near-constant tinkering. Most sites were supplemented with dorms, cafeterias, guard posts, and other amenities. Many sit on the coast, as close as possible to the adversary that the country was trying to watch. The strategic value of their presence helped bolster Alaska’s bid for statehood in 1959.

But following the advancements made in satellite communications in the 1970s, White Alice quickly became obsolete. In the years that have followed, all but the Nome antennas were torn down. Many of the sites had become targets for vandalism and were contaminated with petroleum, lead, and asbestos (all of which were used in the construction and maintenance of the sites). The Nome site alone saw more than 8 million pounds of contaminated soil shipped from the mountaintop to Arlington, Oregon, for treatment. “Generally if there’s a potential liability, whoever owns it is going to want to limit that,” says Bill O’Connell, who worked as an environmental consultant doing clean-up for the White Alice sites in the early 2000s. “Nome had to lobby pretty hard to get the structures retained.”

While the towers, the most recognizable element of the White Alice system, have vanished elsewhere in Alaska, there are some support facilities—largely the original control rooms—quietly standing in the vast landscape. Though these no longer use radio waves, they still serve the purpose of keeping Alaska connected. Now, they hold the networks that make up the internet, phone systems, cellular, and more, allowing roadless villages to connect (digitally, at least) to the rest of the world. The bulk of the sites are now owned by the telecommunications company AT&T, which is tasked with running the next-generation systems.

While the White Alice system needed teams of workers monitoring it around the clock, today one person can do the job alone. “Our remote [former White Alice] sites can run for an entire year without a visit,” says Casey Anderson, an Outlying Area Technician for Core Network Operations with the telecommunications company. “Many times that’s all I do: an annual check-up. Check that everything is fine, turn off the lights, lock the door, fly to the next one.”

In the years post-White Alice, much of the original equipment in the support buildings was replaced by its modern equivalent and some of the buildings have been spruced up, but still, they’re “a little spooky,” Anderson says. “Because they were built to withstand a nuclear blast, the aesthetics of the buildings weren’t particularly important,” Anderson adds. “They’re largely nondescript buildings, in the middle of nowhere, with no windows.”

Because the White Alice sites are the ancestors to the modern communications that make up the bulk of his job, Anderson looks forward to visiting them—he even has a map of Alaska in his home where he’s circled the sites he’s been to. In 2016, Nome recognized that others might be similarly interested in the communications antennae and fought to not only save them but also make them a tourism spot.

In 2012, the land the Anvil Mountain White Alice site sits on was supposed to be given to the Sitnasuak Native Corp, a for-profit company that voted to have the structure dismantled so they wouldn’t be on the hook for any liability. To keep the antennas, the Nome City Council offered to trade Sitnasuak for a significantly more valuable plot of land in town. Sitnasuak accepted and the antennas stayed.

“I think people like the history behind it—it makes them feel like Nome matters to the outside world,” says longtime Nome resident Russell Rowe, adding that often Nomehenge appears on local T-shirts, like an unofficial mascot. “When it was brought up that it might go away, there were a lot of people that were opposed to it.”

For now, the city seems content to leave the site as is, allowing locals to use the surrounding area for recreation. Rowe brings his young sons up to the summit a dozen or so times a year to geocache, pick blueberries, and bike along the trails in the shadow of the 120-foot antennas. There are often other locals up there, hiking with their dogs, picnicking, or gathering the ultra-soft, incredibly warm fibers shed by musk oxen, which make great yarn. Occasionally, busloads of tourists will attempt to traverse the bumpy road to get closer to the site.

“There are 360-degree views of the landscape around Nome from the White Alice site—all the rolling tundra hills, the bigger peaks to the north, and then out to the ocean,” Rowe says. “It might sound strange, but it’s a nice place to be.”

During the winter months, the iconic French site casts a perfect shadow on a bay full of history—and quicksand.
architecture

Remnants of the nation’s diverse history are littered throughout the historical region known as Galicia.
cold war

The Iron Curtain went to infinity and beyond.
Video • AO Docs