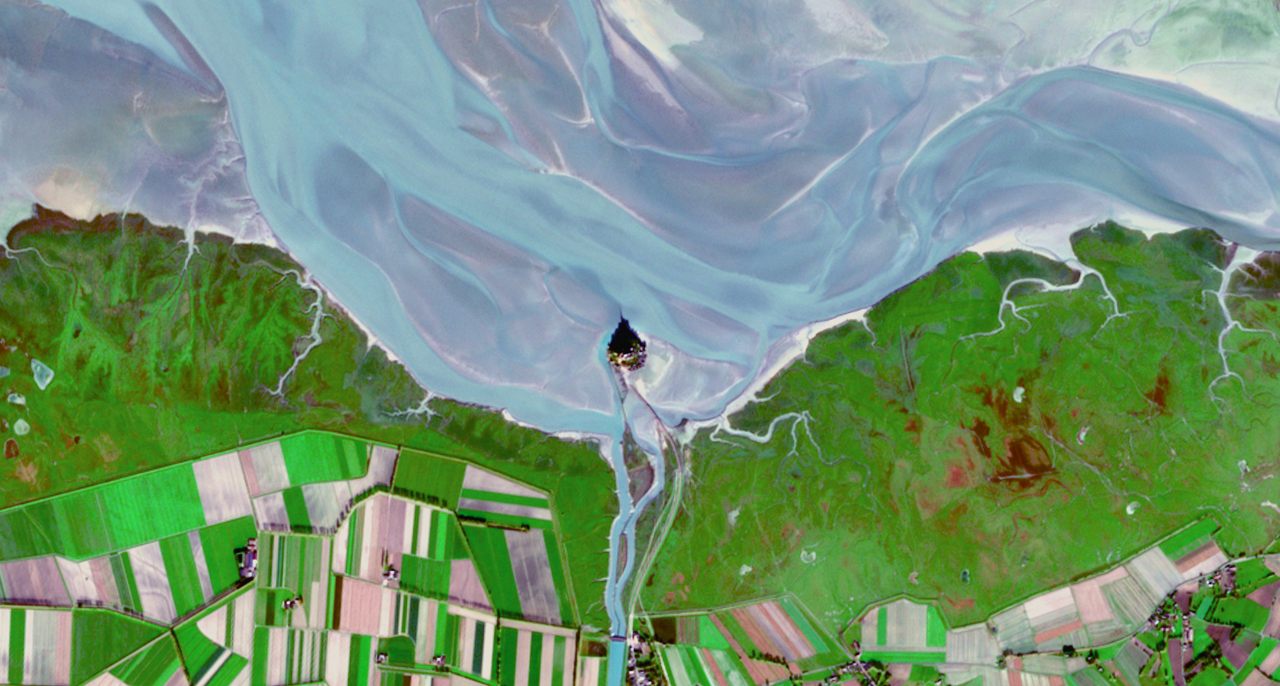 The low angle of the winter sun creates a perfect shadow of the iconic Mont Saint-Michel abbey on the water. European Union, Copernicus Sentinel-2 imagery
In This Story
Place

This 1,300 year old monastery built atop a single rock was once only accessible depending on the whims of the tide.
Destination Guide

It is one of the most beautiful and recognizable abbeys in the world: Rising above the medieval walls of a tidal island on France’s northwestern coast, the monastery of Mont Saint-Michel seems to float in the glassy waters of the surrounding bay. At least, that’s how it appears from the mainland, less than half a mile away.

Seen from space during the late autumn and winter months, when the sun is lower in the Northern Hemisphere sky, the monastery’s walls and spires cast a perfect shadow onto the bay. The image above, captured by the European Union’s Copernicus Sentinel-2 satellite on November 12, 2022, shows the abbey and island, and their dramatic winter shadow, amid a swirl of enhanced colors. Vivid greens indicate active agricultural areas, while pastel blues and purples reveal the complexity of currents in the shallow Bay of St. Michel. The bay’s tides can fluctuate by nearly 50 feet, occasionally covering the modern bridge that has linked the island to the mainland since 2014.

Most of the buildings and walls standing there today date from the 11th to the 16th centuries, the height of the island’s time as a Benedictine abbey. There are, however, some traces of an earlier life as a holy site dedicated to Archangel Michael in 708, including early and sublime examples of ribbed vaulting and a small, pre-Romanesque church.

The abbey and small village around its base, as well as the island and surrounding bay, have enjoyed UNESCO World Heritage status for more than 40 years, and the fairy-tale setting has inspired countless postcards, screensavers, and at least one version of an actual fairy tale: Corona Castle in Disney’s Tangled movies is based on the island. It’s not the first time Mont Saint-Michel has shown up in the pop culture of the day. The abbey and its island feature in the 11th-century Bayeux Tapestry as a landmark on William the Conqueror’s march from Normandy into Brittany.

The island has been many other things, too, including an ancient fort, a prison after the French Revolution, and even not an island. What’s now Le Mont is one of a handful of dome-like volcanic plugs in the region that formed more than 500 million years ago, and it’s been part of the mainland on and off ever since. Over the last half-million years, it weathered the multiple catastrophic megafloods that eventually led to the formation of the English Channel. During the last Ice Age, when sea levels were hundreds of feet lower than today, it was encased in ice and well inland.

The bay that now laps at Mont Saint-Michel’s feet formed just within the last 8,000 years. Even now, in the spring, when low tides are at their most extreme, the waters vanish, receding up to 12 miles from the island. While one might be tempted to walk the short distance from the mainland to Le Mont during these periods, it’s not a good idea to just wing it: Sable mouvant—quicksand—awaits in exposed areas around the island and has claimed untold numbers of would-be pilgrims over the centuries.

Before the 21st-century bridge, a series of causeways, some elevated and some exposed just at low tide, provided the only safe way to reach Le Mont (even small boats can have trouble navigating the shallow bay). Now, the abbey and island are an easily accessible site of pilgrimage for both spiritual growth and selfies, an eye-catching marvel of nature and engineering that stands out even from space.

Celebrating the United States of Stuffing

A rich local history has long been overshadowed by a few months under a Russian flag.
maps

The recent discovery of the world's northernmost "island" recalls the groundbreaking work of the international Polarfahrt team more than 90 years ago.
abandoned

Built from recycled materials by an eccentric con artist in the 1930s, the curious creation was demolished—and then reborn.
horticulture

The world’s largest array of greenhouses has transformed the region economically, and in other, unforeseen ways.
Video • PinDrop