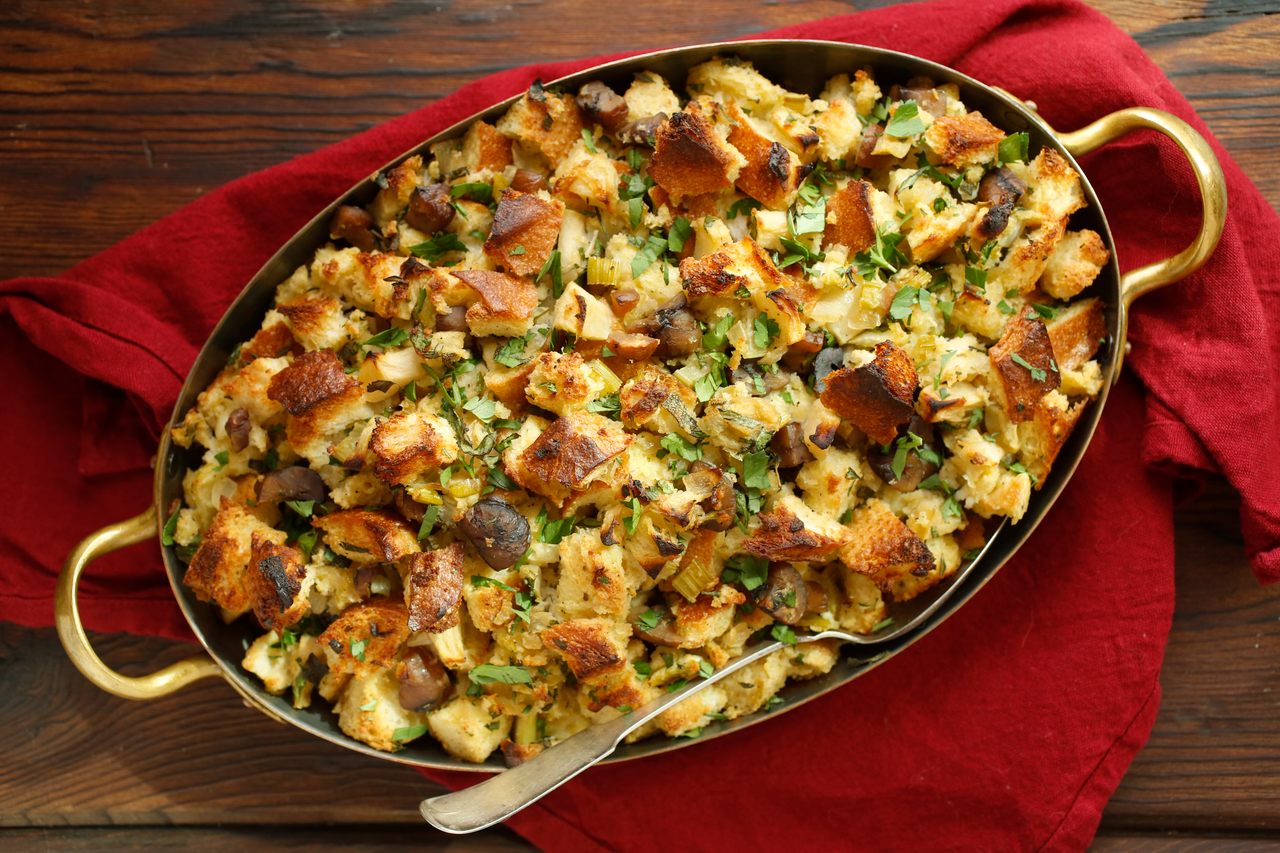 THIS ARTICLE IS ADAPTED FROM THE NOVEMBER 19, 2022, EDITION OF GASTRO OBSCURA’S FAVORITE THINGS NEWSLETTER. YOU CAN SIGN UP HERE.

Let’s get one thing out of the way: stuffing is indisputably the best Thanksgiving dish. Turkey is fine, gravy is essential, and I’ll never say no to a sweet potato, but stuffing just plain rules. It’s good soused in gravy on Turkey Day, better still fried in butter and topped with sunny side up eggs for breakfast the next day. The real pros throw it in a waffle iron, creating a whole nest of craggy, crunchy edges.

Sure, there’s no evidence that the Pilgrims and the Wampanoag ate stuffing at the first Thanksgiving. And it’s not as if Americans came up with the concept. Humans have been cramming aromatics, bread, and other fillings into animal cavities more or less since they started writing recipes down.

In De Re Coquinaria, the oldest cookbook on record, the writer describes making porcellum hortolanum, a whole hog stuffed with everything from shell-on snails to several varieties of sausage. He also talks about stuffing chicken, hare, and unspecified fowl with all sorts of treats.

In the 19th century, Marie-Antoine Carême, chef to the imperial French court, delighted royals by stuffing foie gras and truffles into chickens. And even if, as legend has it, the famed chef Auguste Escoffier balked at the idea of serving turkey to Americans staying at the Ritz Paris, he had no qualms about stuffing other birds.

Also, who could forget engastration (a snazzy way of saying “stuffing one animal inside of another”)? In 19th-century England, that meant Pandora’s Cushion, a predecessor to the turducken made of a quail stuffed into a chicken stuffed into a goose.

That concept really jumped the shark with the French rôti sans pareil, or “roast without equal,” consisting of no fewer than 17 exotic birds jammed inside one another and roasted. Alexandre Balthazar Laurent Grimod de la Reynière, considered the world’s first restaurant critic, came up with the recipe in 1807. It starts with a tiny warbler and ends in a Great Bustard. Grimod didn’t expect anyone to make this monstrosity, but he appreciated its shock value.

Stuffing isn’t an exclusively western concept. Eight-treasure duck, which comes loaded with glutinous rice studded with Jinhua ham, sweet sausage, salted egg yolks, and jujubes, has been a Cantonese banquet fixture for more than a century. Ikemashi, or squid stuffed with glutinous rice, is a Japanese staple.

Yet even if Americans didn’t invent it, in our typical maximalist fashion we have taken stuffing to its logical extremes, fortifying it with an unholy amount of butter and whatever delicious things happened to be available in our home region.

In Louisiana, that might mean chunks of andouille sausage, while Texans may prefer pecans. New Englanders might throw in shucked oysters. It means the carbohydrate base of choice can be cornbread in the South, wild rice in Minnesota, mashed potatoes in Pennsylvania-Dutch country, masa in New Mexico, or brioche if you’re feeling fancy.

All that variation is part of why stuffing is so difficult to define. Plus, in order to avoid salmonella contamination, most Americans no longer actually put their stuffing inside the turkey at all.

As the designated Thanksgiving cook in my household, however, I’d argue that stuffing’s somewhat nebulous identity means it’s one of the rare opportunities for creativity on this holiday. Many canonical Thanksgiving foods follow a strict formula, but stuffing can be whatever speaks to your heart and feels right.

Since everyone has their own ingrained ideas of what stuffing should be, coming up with the perfect recipe for one is daunting. So on a recent fall day, I met with fellow stuffing enthusiast Eric Kim, food writer for The New York Times, who decided to take a journalistic approach to the task.

In order to engineer a stuffing that combined some of the best elements of different regional and historical styles, Kim dove deep into The New York Times archives.

When I visited, he was in the process of taste-testing no fewer than 18 stuffing recipes, plus two boxed stuffings for comparison’s sake. What struck me most was the sheer diversity of the line-up, which included everything from cornbread dressing with pork sausage to hashweh, made with spiced rice and lamb topped with fried almonds and pine nuts.

Kim’s final recipe is an original creation, but one that feels comfortingly familiar because it’s so grounded in different traditions. You can see the video of the testing process here, as well as the recipe it ultimately led to here. Below is our conversation, which has been edited for length and clarity.

What kind of stuffing did you grow up with?
I grew up with the boxed stuffing, to be honest. I was always worrying about other people’s favorite dishes, so that’s the one I didn’t make from scratch.

That’s what my grandmother made and I didn’t hear anyone complaining. When did you break out of the boxed rut?
Over the years, I started adding stuff. Instead of just adding water and butter, I started using the butter to sauté onions and celery, adding more sage, and then adding milk or stock. Then I started supplementing it with cornbread. And by the end, I was able to take out the box, because I had basically made stuffing.

What started you down this stuffing rabbit hole?
The real reason I pitched this is that I had that pizza stuffing last year. And I got a few comments from people who were like, “This isn’t stuffing!” That made me ask the question, as someone who’s made Thanksgiving dinner since I was 13 years old: “What is stuffing? Do Americans have some kind of unified idea of what stuffing is?”

It’s … better than the turkey. We can say that, right?
I think so! Stuffing is my favorite dish. It’s everyone’s favorite, but I thought, how do I make it sexy? And how do you bring it into the world of The New York Times? Anyone can develop a stuffing recipe, but I wanted to dive into what is stuffing to Americans through reporting.

If your stuffing isn’t stuffed into a bird, how do you even define it?
It’s not stuffed, so my definition is “stuffing” is basically something with stuff in it! I think we’ve seen from looking at these 20 different kinds, the definitions are really vast depending on where you live. Wild rice is really popular in Minnesota, which is interesting.

When you go out and do field reporting, what types of regions or varieties are you looking at?
I’m really trying to find significance in different regions. So what I mean by that is, an oyster stuffing might seem really specific to one region, but it’s also really important to that region. So I have to try it. And because I tried it, I learned that oysters and cream make the stuffing taste like clam chowder. And that’s freaking delicious.

I was shocked how good that one was.
It just goes to show that you really need to have an open mind. There’s a reason why something is popular in a region. There’s a reason so many people love cornbread dressing in the South. There’s a reason sourdough is used in California. In Hawai’i, we had a mochi rice stuffing, which is really special. I think if enough people do something, that means it’s important to look at.

You’ve got some really interesting recipes in the mix here.
I just think this was a really cool reminder of how many reported recipes we have in the NYT Cooking app. This is not an ad! My point is NYT Cooking isn’t not just a database of recipes. It’s historical accounts of certain dishes. We have Jimmy Buffet’s sister’s stuffing.

And Marilyn Monroe’s!
That one’s wild. It kind of feels like a salad. It’s not my favorite.

It doesn’t really cohere. It’s so chaotic.
It is chaotic and it feels fun. I respect her chaos. I mean, those people are famous, but they also happen to have family stuffings. And it’s our reporters who go and find those recipes. I think that’s what makes these recipes special. They all came from someone for whom these dishes were important.

A giving guide from the Atlas Obscura team.
holiday

Podcast: Trailing of the Sheep

What happens when thousands of ovids take over an Idaho town.
Sponsored by GoUSA TV
holiday

Lismore's festive trees are made out of glorious garbage.
holiday

In Wisconsin, Christmas Calls for Raw Meat on Rye