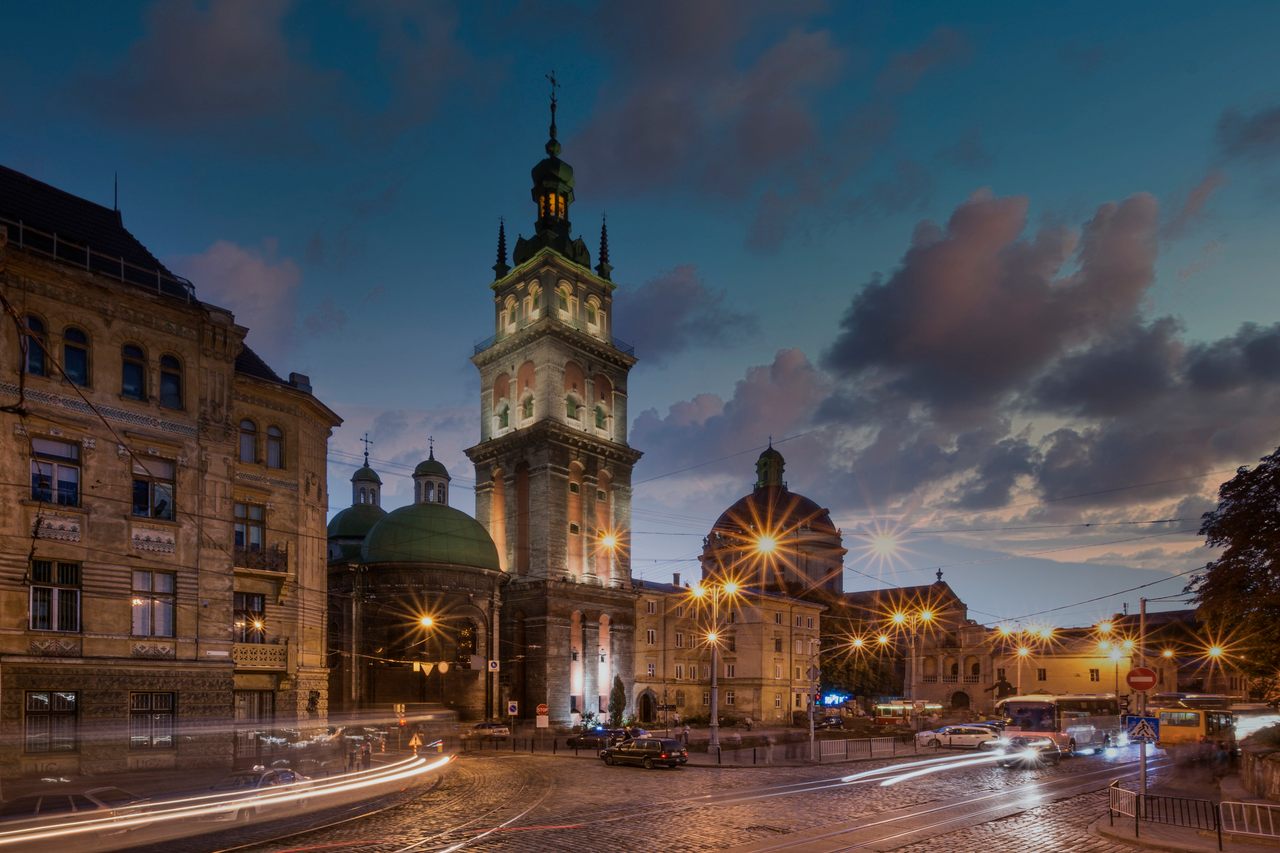 The 14th-century Cathedral Basilica of the Assumption is at the heart of Lviv's Old Town, a UNESCO World Heritage site. Ayhan Altun/Getty Images
In This Story
Destination Guide

Nestled in the rolling foothills of the Carpathian Mountains lies a verdant landscape dotted with evergreens and medieval cities. It’s a region that has seen many people come and go. Ancient Greeks, Romans, Byzantines, Goths, and Huns all have claimed and lost pockets of land there. In the ninth century, Scandinavian Vikings, known as the Rus, established one of medieval Europe’s most powerful states there. Centuries later, a Rus descendant, Prince Roman of Volhynia and his son, pulled a new kingdom from its ashes: Galicia. In the late-18th century, that kingdom eventually became the Austrian Empire’s easternmost crownland before they, too, lost it—to the Soviet Union.

Areta Kovalska, who grew up in a Galician Ukrainian community in Chicago, has lived in Lviv, Ukraine, for the past 11 years and runs the blog Forgotten Galicia, where she documents, writes about, and photographs the relics of Galicia. Following Russia’s invasion of Ukraine on February 24, 2022, Kovalska fled to Poland, where she’s currently staying with relatives. Atlas Obscura spoke with Kovalska about Galicia’s complicated history, her family’s past, and Ukraine’s legacy of resistance.

Can you tell me about growing up in Chicago?

I grew up in Chicago in the Ukrainian community. There were Ukrainian Saturday schools, scouts, and dancing. At the time, I didn’t know Ukrainian history well. I didn’t realize that the culture and the language that I grew up with [which integrates some Polish vocabulary] was more Galician.

Once I started learning more about the history, I got very intrigued, especially by western Ukraine’s history under the Austrian Empire. I realized that I was brought up in this more western Ukrainian culture because of the language my parents speak, and even some of the institutions that I grew up with in Chicago. Our scouting organization was founded in western Ukraine under Galicia, and same with our Ukrainian Saturday school organization. A lot of these institutions that Ukrainians brought over after World War II were originally founded in western Ukraine and Galicia because under the Austrian Empire Ukrainians had much more freedom to create different societies to promote Ukrainian identity.

What made you want to start Forgotten Galicia?

One of the times I was visiting Lviv, I started coming across these old hand-painted signs on facades of buildings that dated from before World War I. They were mostly in Polish and Yiddish. And I just thought it was so amazing that these traces of the past could still be found in Lviv. It was a reminder that Lviv was once this multicultural hub for Polish, Ukrainian, and Jewish cultures. After World War II, the Jewish population was murdered in the Holocaust. The Polish population was deported, and a lot of Ukrainians fled. In their place, Ukrainians from outside of the city, as well as people from eastern Ukraine or from Russia came to Lviv. So the population was pretty much entirely lost. It’s almost impossible to find anyone in Lviv who has family that lived there before the war.

So when I started coming across these traces of that multicultural past, I just was so fascinated by it. The Ukrainian history that I learned was specifically about Ukraine and not about the multicultural history of Ukraine. So I wanted to do something with these inscriptions. Then I started realizing that there were all these other traces that you could find from the pre-war Lviv, like manhole covers with Polish inscriptions. I eventually thought of creating a blog to collect these images and research them, and it kind of grew from there.

Can you tell me about your grandparents’ experience fleeing Ukraine?

It started in 1939 when western Ukraine came under Soviet rule for two years. My grandmother was involved with the Ukraine national resistance and my grandfather was a professor. In 1940, my grandmother was arrested by the Soviets as a political prisoner. As the Soviets were retreating from the Nazi German invasion in 1941, they basically killed all political prisoners. My grandmother miraculously survived. So then my grandparents lived under German occupation for a few years, and then when the Soviets were advancing in 1944, my grandparents understood that they had to flee because they knew if they stayed they would most likely be killed or sent to Siberia.

So my grandparents fled with my grandmother’s mother and grandmother and their first child. They were basically on foot. I think there was a wagon with some of their belongings. Maybe someone was on a bicycle. They eventually made it to Bavaria, where there were dozens, maybe hundreds, of displaced persons camps where they lived for several years before they went to the United States.

My grandparents were never able to return to Ukraine. They never returned to their home. It was very important for their children and grandchildren to learn the language and the culture. There were a lot of restrictions under the Soviet Union, and they didn’t know if it would be possible to maintain the culture and language in Ukraine. So it was very important abroad to continue that language, passing it along.

I had always loved Ukraine and always wanted to try to live there. I feel like maybe I moved back for my grandparents. Never in a million years did I think that I would have to retrace the path of my grandparents and flee due to basically the same enemy. It’s surreal.

Can you talk more about that? How do you see Ukrainian history echoing today?

I guess it’s hard for me to believe that history is repeating itself. Ukrainians just want to have their own language and culture and have an independent country. We’ve been fighting for this for centuries. And I never would have thought in the 21st century that Ukrainians would still have to fight for their freedom.

We have this rich culture of fighting for freedom. You can see it in literature and in folklore. A lot of our folk songs are about Ukrainians fighting for their freedom, fighting to be Ukrainian. A lot of us have grandparents who fought in World War II for an independent Ukraine against both Soviets and Nazi Germans. It’s not that we’ve gotten used to it. But a big part of our culture has always been this fight for freedom and this fight to be Ukrainian, to be able to speak our language, to be able to wear our embroidered blouses.

Right now, Ukrainians are very united. Ukrainians realize that Ukraine is a diverse country. It doesn’t really matter what language one speaks or the history. We’re all united because we want to live in a free, independent, democratic country—a country that can prosper.

The Curious Afterlife of a Fascist Utopia

What's next for this architectural wonder hidden in the swamps of northern Italy?
islands

Recruits learned the arts of infiltration, sabotage, and survival at a hidden base on Santa Catalina Island.
churches

Every January, the doors close and the cleaning starts in Dresden’s iconic Stone Bell.
gates to hell

Will the Gates of Hell Be Closed Forever?

Turkmenistan’s Darvaza gas crater has been on fire for decades. The inferno may finally be extinguished.
Video • Gastro Obscura