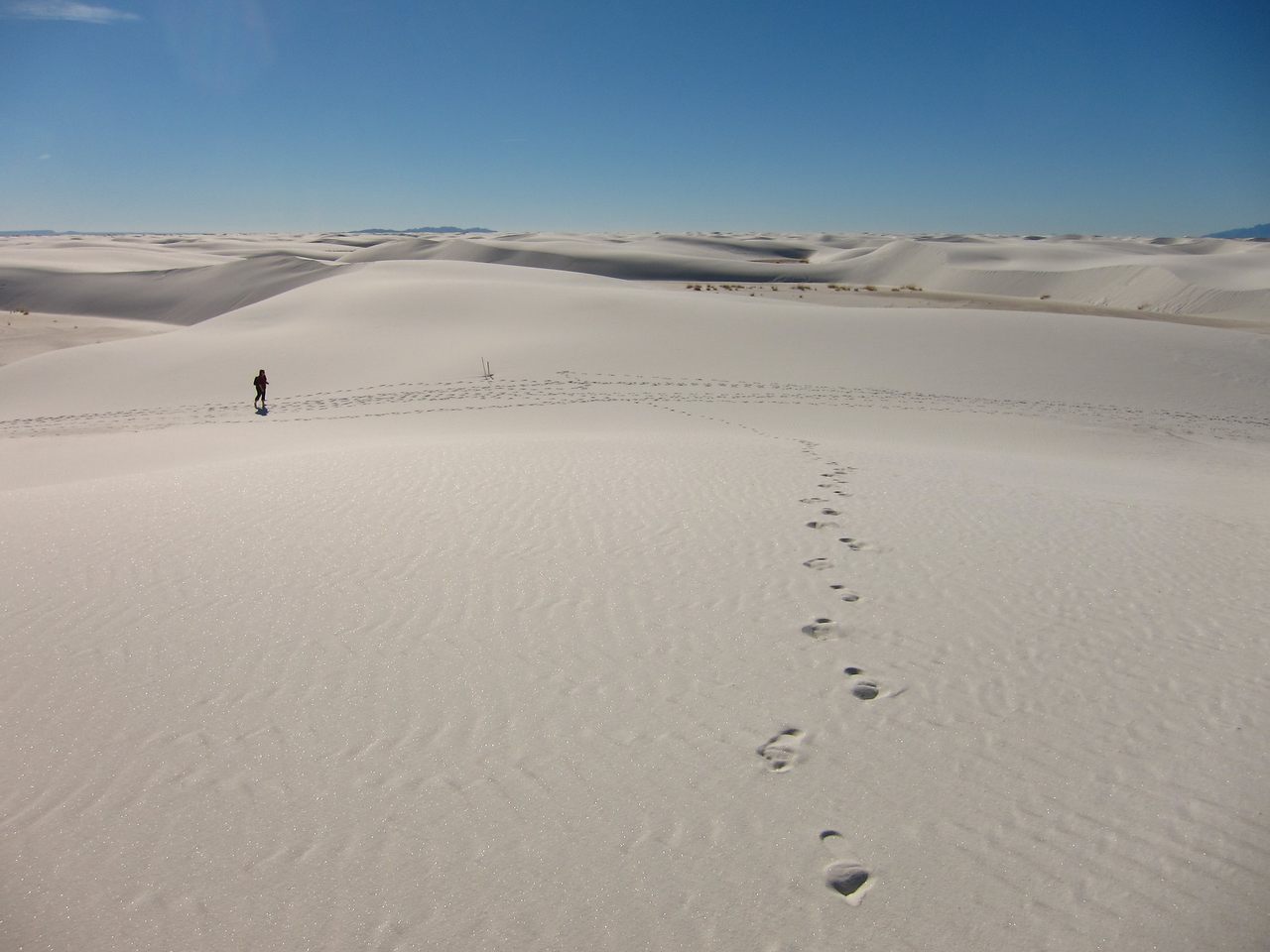 Modern footprints speckle the Alkali Flat Trail at White Sands—and around the area, oodles of prehistoric footprints are buried beneath the sand. Rob Pongsajapan/CC by 2.0
In This Story
Place

Explore the largest pure gypsum deposit in the world, and go dune sledding while you're at it.

Today, White Sands National Monument in New Mexico is studded with dune fields, which are constantly being shuffled and sculpted by the wind. Visitors can hike across the soaring, powdery mounds of gypsum, or even barrel down them on a sled. The dunes seem to go on forever: They stretch for hundreds of square miles, and as the sand whips past, it’s easy to imagine an infinity of white, rolling humps.

At the end of the last Ice Age, it looked a lot different. Neighboring Lake Otero was beginning to evaporate, leaving behind selenite crystals that eroded into the sands of Alkali Flat. In the waning days of the Pleistocene, a human, a ground sloth, and a mammoth trudged across the eastern side of that disappearing lake. Now, well over 10,000 years later, researchers from Cornell University, Bournemouth University, and the National Park Service are using ground-penetrating radar to study the tracks they left behind.

An animal can only die once, and when it does, there’s a vanishingly slim chance that it will become a fossil: Far, far more often than not, an animal’s carcass will decay and rot until there’s little proof that it ever existed at all. While it’s alive, though, a creature can stamp proof of itself all across the landscape. Ichnology is the study of those preserved tracks, burrows, and other “trace fossils”—and it’s a way for researchers to visualize an animal’s behavior and biomechanics without a body in sight.

Like any other fossils, trace fossils owe their existence to a bit of luck. “You need a surface that is soft enough to deform and leave an imprint, which is true for sand and mud,” says Douglas Jerolmack, a geophysicist at the University of Pennsylvania who has worked extensively in White Sands but was not involved in this current research. “To preserve it, you also need the surface to ‘lock in’ that imprint somehow,” he adds. A track might be submerged by other sediment faster than wind or water can obliterate it, for instance, or it may be cemented in place. Jerolmack suspects that’s what happened in White Sands. “The upwelling of salt-saturated groundwater in the arid environment there leads to precipitation of salt that builds little bridges among sand grains and binds them together,” he says.

Researchers have long known about the prehistoric tracks scattered throughout White Sands, but it’s hard to study them up close. Though there might be as many as millions of trace fossil tracks in the area, “most of them, you’ll only see intermittently or not at all,” explains Thomas Urban, a research scientist at Cornell University and the lead author of the team’s new paper in the journal Scientific Reports. The tracks are often easiest to glimpse right after a rain, or when sunlight rakes across a salt crust just so. They’re also spectral—visible one afternoon, and gone the next. When they were completing their field work, Urban and his collaborators stumbled across sloth prints one day, only to find them covered up again when they returned. “That’s why we call them ‘ghost tracks,’” Urban says.

It’s also highly likely that, over the years, humans have spotted the ancient tracks left by mammoths, ground sloths, canids, felids, bovids, and camelids, and believed them to be something else. To the casual observer, mammoth tracks—which can be the size of a trash-can lid—“just look like a big round thing,” Urban says. Some passersby probably figured they were puddles that had dried a little strangely on the sand; others have thought that the prints were proof that a giant human once lumbered across the landscape.

In 1932, a government trapper named Ellis Wright rounded up a group of brave souls to go investigate 13 tracks “of unbelievable size” that he’d noticed imprinted in gypsum. The footprints were gargantuan—22 inches long and eight or 10 inches wide, far bigger than any man’s he had ever seen. Still, the group concluded that the tracks had been left by a human, according to a 1938 pamphlet. “There was not one in the group who cared to venture a guess as to when the tracks were made or how they became of their tremendous size,” the pamphlet declared. (The prints Wright described “closely match” the giant sloth ground prints found in White Sands today, says David Bustos, the monument’s resource program manager.)

Urban and his collaborators wanted to learn as much as they could about the area’s trace fossils without digging them up. That’s partly because once the ground is disturbed, it’s never the same. “Excavating a site alters it permanently, which makes it difficult for others to study in the future,” says Taylor Perron, a geologist at the Massachusetts Institute of Technology who was not involved in this research. “There is also a risk that you will miss something important in the material you remove,” Perron adds. Plus, even if Urban and company were willing to plunge shovels into the soft sediment, the task would be too huge. “There are just too many of them,” Urban says. “It would be centuries of work.”

Ground-penetrating radar machines, which look like a cross between a metal detector and a vacuum cleaner, are a lot quicker. Urban’s team set down a foam pad to cushion the sediment, and then rolled their machine along it, in straight lines spaced a few inches apart. “All I have to do is walk,” Urban says. The wheel is hooked up to an odometer, and the machine sends a pulse into the ground at regular intervals. The team can tackle a site in just a few hours, compared to the months it might take to excavate by hand.

The data that comes back are traces, or series of oscillating pulses. A bunch of those form radargrams, which look like cross-sections; from there, the researchers interpolate in between them to make a 3D image that helps them understand what’s going on beneath the surface.

The radar can reveal the size, shape, and direction of tracks, as well as the depth of the compressed sediment beneath it. That 3D image of the ground beneath the footprints “would be difficult to study through excavation—and you would have to dig up the footprints completely to get at the material underneath,” Perron says. Looking at the compression can help researchers piece together information about biomechanics, including how the creatures distributed their body weight as they strode along.

The tracks also highlight chance encounters in the prehistoric neighborhood. At the site where they did their fieldwork for the Scientific Reports paper, Urban and his colleagues found that a Pleistocene-era human had wandered for about half a mile, heading north. Later, a mammoth trundled through from the side, and squished that footprint. Eventually, a human—maybe the same one—ventured south. “The mammoth messes up the human footprint, and then a human turns around and messes up the mammoth print,” Urban says.

After comparing the radar data to an excavated site, the researchers found that the machine was able to detect almost all of the tracks—and revealed more than they expected to encounter. Each time the team has used the machine in an area where trace fossils have been spotted, “there are always more than we thought there were,” Urban says. So far, the team has surveyed between 25 and 30 sites around White Sands, and they’re still interpreting their data.

For the average visitor, “ghost prints” are still elusive. The trackways aren’t accessible to the public, and the researchers keep the exact locations secret, to minimize damage to the fossils. But there are a few prints on display at the visitor center, says Bustos, the resource program manager, and the park is working on 3D models of the trace fossils that can be accessed digitally from anywhere. Beneath that ancient sand, there are many more stories to tell.

But they didn’t eat our ancestors—probably.
dinosaurs

Here’s why it’s really, really hard to count how many of the apex predators once stalked Earth’s surface.
science

In Upstate New York, Ancient Arthropods Can Get Turned Into (Fool's) Gold