The Cambrian Creatures That Grew Up Over the Course of 28 Bodies - Atlas Obscura
Want to see fewer ads? Become a Member. 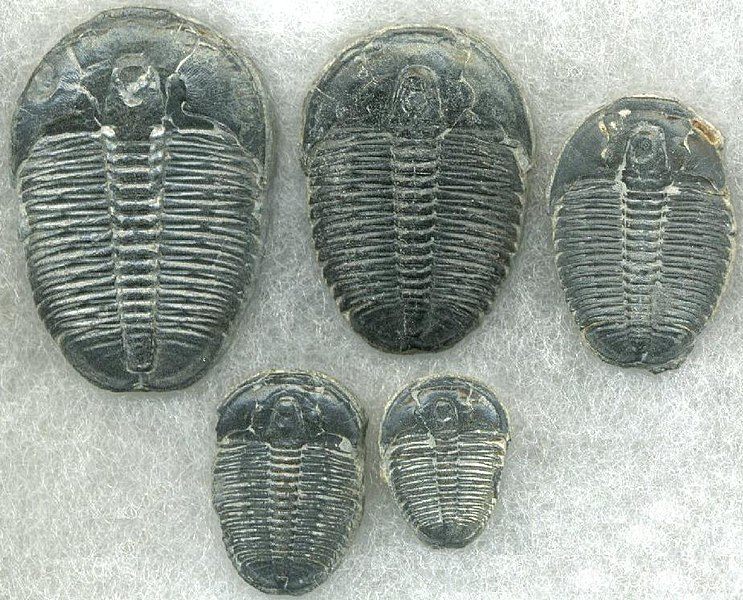 With any luck, humans change a lot over the course of our time on Earth. As we grow out of our teeny onesies and our teenage styles, the aging process can feel a lot like shedding a past self. But other creatures literally do that: step out of their bodies and grow into a new one. For trilobites—marine arthropods that appeared in the Cambrian period, more than 500 million years ago—molting was a key part of growing up.

Trilobites could crawl out of their exoskeletons more than two dozen times in a single lifespan, typically by arching their bodies, lodging themselves into the sediment, and pushing out of the exoskeleton through the head, which separated into pieces. “The animal pulled itself out of its molt and walked out through the opening,” says Melanie Hopkins, an associate curator of paleontology at the American Museum of Natural History. Hopkins recently researched how a species called Elrathia kingii changed over the course of many, many molts.

The scientific appeal of E. kingii comes from its frequent appearance in the Wheeler Formation in western Utah. There, it’s everywhere: “I could find a lot of well-preserved specimens in a really small amount of rock,” Hopkins says. (In most other respects, such biology or nearby ecology, this particular species of trilobite isn’t all that special—no offense, E. kingii.) The Wheeler Formation has sparse vegetation, which makes it easy for scientists to scour, and the fossils happen to be reddish or brown—darker than the surrounding rock. E. kingii is abundant in those layers, and Hopkins and her crew gathered over 450 specimens, and collected data from 228 of them. Back in the lab, they cleaned them up and started measuring.

After molting and scuttling away, E. kingii would take in a bunch of water. The new exoskeleton would form around them, like custom-built armor. “They would swell up, and then start to deposit calcium carbonate back into its outermost layer,” Hopkins says. (Something similar happens with present-day spiny lobsters.) In that process, Hopkins found, the animals would often grow new thoracic tergites—segments that run down the length of the body and look like vertebrae. (Segments like these helped trilobites curl up into tiny balls for safety.) Over time, the animal’s eyes also slowly moved closer to the back of its head, and sideways. As Hopkins describes in a new article in Papers in Paleontology, the youngest specimens of E. kingii would have measured a wee 0.02 inches long. Over the course of 28 molts, the creature reached a maximum body length of a little less than 1.5 inches. Hopkins found that, for the early part of development, the number of segments was a good indicator of age. Over time, the animals stopped adding segments. To gauge the ages of individuals with the same number, scientists look at the growth rate of the head, instead: The bigger the head, the older the animal.

There are still mysteries to the ancient life and times of trilobites, including how frequently E. kingii molted, and how long it lived. (Some contemporary arthropods, including some crab species, only live a few years, for instance, while some lobsters can survive for many decades.) A number of factors may have affected the growth rate and frequency of molting, including temperature and what kind of food was available. Other trilobite species that got more hulking may have gotten better at dodging predators, and therefore managed to stay alive longer. (The largest known trilobite—found in Manitoba, Canada, and dubbed Isotelus rex, or “King of the Trilobites”—measured a slightly mind-boggling 28 inches long.)

Hopkins was intrigued to see that, unlike humans, E. kingii didn’t seem to stop growing after it left its wild youth behind. In fact, it did more of its growing later. “They stopped adding body segments at 0.2 inches,” she says. “All of the rest of the growth happened as an adult.” She says it might seem counterintuitive because of how humans grow—markedly in childhood and adolescence, and then hardly at all. Maybe there’s a lesson to be learned in how E. kingii kept moving forward, again and again and again.

Here’s why it’s really, really hard to count how many of the apex predators once stalked Earth’s surface.
science

Trace fossils are useful paleontological allies—but they can't tell us everything.
science

Conservationists are teaming up with fossil experts to help the bivalves—and the state's oyster economy—survive.
science

In a region central to the study of human evolution, a new program focuses on training more African students.
Video • Object of Intrigue