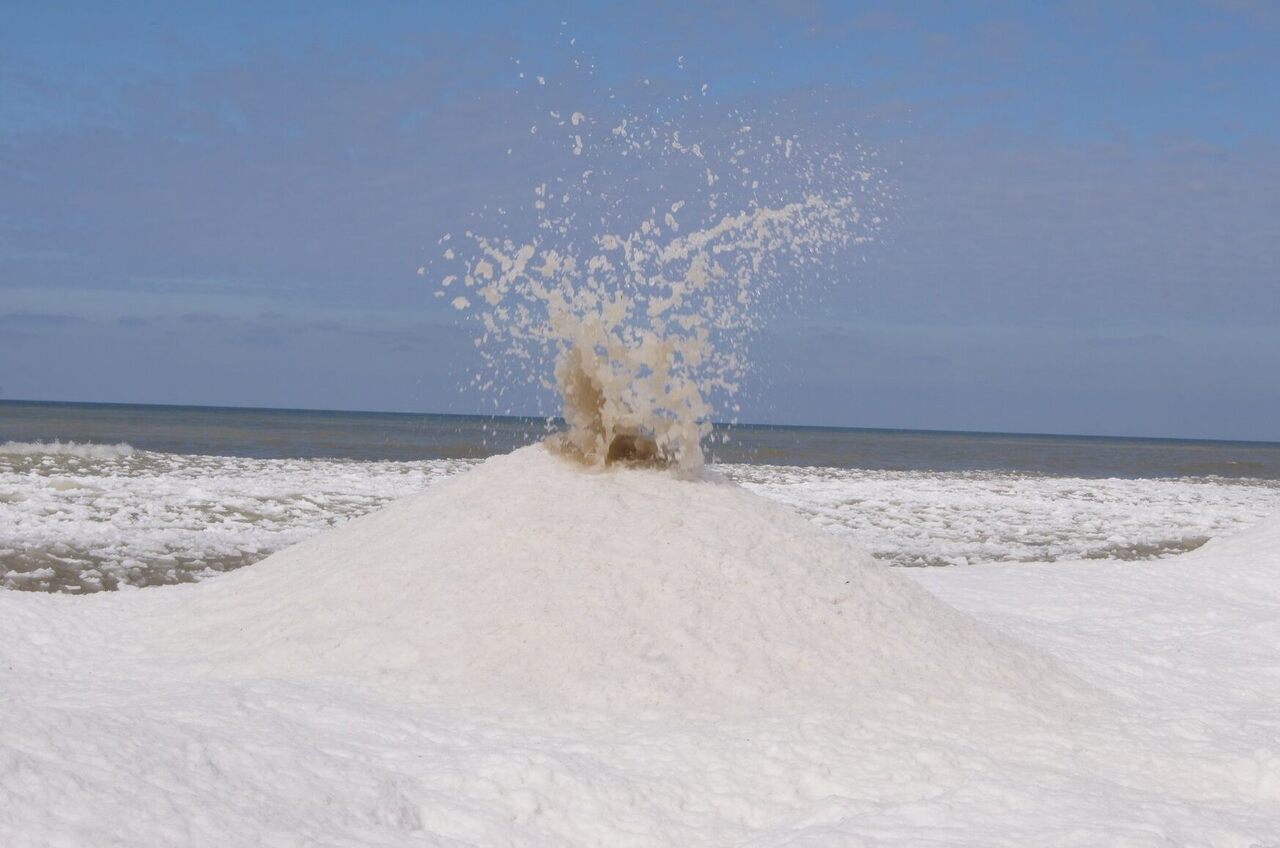 There she blows! All photos courtesy Ernie Ostuno
In This Story
Destination Guide

Recently, on a stretch of Lake Michigan’s coastline about 35 miles from Grand Rapids, so-called “ice volcanoes” seemed to erupt again and again. The vaguely conical mounds of snow and ice, soaring at least 10 or 15 feet tall, and stretching tens of feet wide, flanked the shore of a place called Oval Beach. But because they have nothing to do with molten rock or subterranean gas, they sound nothing like volcanoes, says Ernie Ostuno, a meteorologist with the Grand Rapids office of the National Weather Service, who has observed them for years. “It sounds like if you got a big Slurpee, and then dumped it on the ground,” he says.

“Ice volcanoes” are common sights along the coast of the lake. “They happen every winter,” Ostuno says, though the timing varies. This year, they formed near the middle of February, about a month later than they typically do, because January lacked a severe cold snap. The key ingredients are bitter temperatures (typically several degrees below freezing, and often lower than 20 degrees Fahrenheit), heavy snow, and significant wave action, Ostuno says.

When snow crystals fall into the cold lake, ice accretes around them and forms slush. With enough cold and gusts of chilly wind, those hefty chunks of floating ice can beach themselves on sandbars. Eventually, like rotund snowballs destined to become snowmen, they get so big that they stay put. As waves splash them, more and more ice builds up in irregular formations, making the mounds. The so-called volcanoes, which Ostuno estimates probably weigh hundreds of tons, essentially sit on the ridges of sand. Geologists at Michigan Technological University who have studied the phenomenon around Lake Superior suggest that there, too, ice volcanoes are especially likely to hug features such as sandbars, shorelines, or rock reefs.

Near Oval Beach, at least, ice volcanoes often aren’t perfect cones: On the side that is struck by the waves, they’re slightly open, and look like cracked fortune cookies. The slit faces a front of open water. When the waves bump that part of the mound, Ostuno says, “You can hear it hit, boom, and then see the water shoot up.” The slushy water spouts pretty regularly, Ostuno adds, sometimes every few seconds, though he’s not sure exactly what governs the intervals. He suspects it has to do with the amplitude or periodicity of the waves.

When conditions cooperate, mounds can form over the course of a single day, Ostuno says. And while they often stick around for awhile, they can also disappear just as fast. “Wind and waves can make ice really quickly if it’s really cold,” he says, and slightly warmer blustery days can dismantle the mounds in a flash. A 50-degree day with strong winds, for instance, would spell doom for an ice volcano, he adds.

Oval Beach is far from the Arctic Circle, but there are moments in the depths of winter when it’s easy to forget that, Ostuno says. On the outer sandbar, where it’s unsafe to roam, you can hear this “otherworldly sound—scraping, groaning, really crazy,” Ostuno says. “It’s the combined sound of hundreds of freight-car-sized chunks of ice grinding together.” When the waves really kick up, the ice out there begins “calving sections, like a glacier,” Ostuno says. In the Arctic, people “see this stuff all the time,” he adds. “In Michigan, you only see it for one or two months in the winter.” It’s part of the charm of ice volcano season.

It took an international team (and Buckingham Palace).
winterweathericevolcanoeslakes

Help us keep them coming by directly supporting Atlas Obscura.
Become a Member
$5/month $10/month $20/month
See All Membership Options
Already a part of our membership program? Sign in.
No Thanks
Keep Exploring
volcanoes

At the time, unrest roiled Egypt and an empire rose in Rome.
lakes

Wind and waves sprayed freezing water from Lake Erie onto the houses of Hoover Beach.
nature

A ranger initially mistook the clumps for wads of wet toilet paper.
sports

For hundreds of years, sailors have zipped across frozen lakes and rivers—but now chances are fewer and farther between.
Video • PinDrop

“This is an impressive display of the power of wind and water!”
Read more
Thanks for sharing!