Did an Alaskan Volcano Help Change the Face of the Mediterranean World? - Atlas Obscura
Want to see fewer ads? Become a Member. 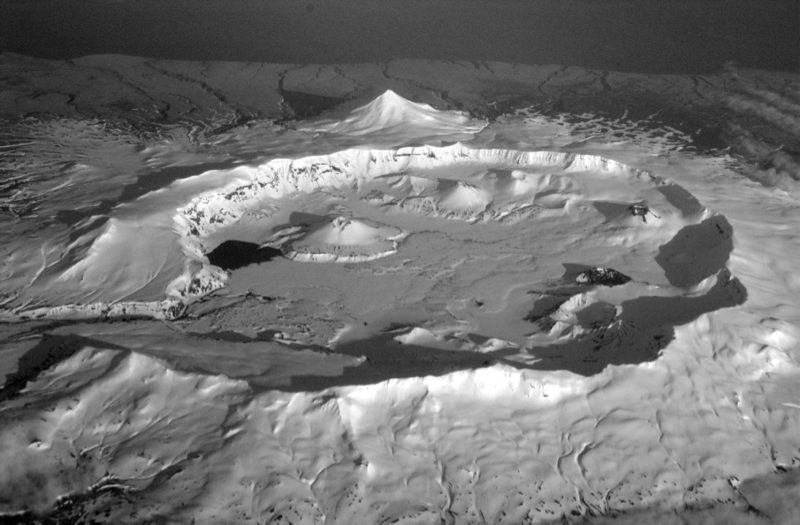 The six-mile-wide Okmok caldera, where consecutive eruptions in 45 and 43 B.C. would be felt across the Northern Hemisphere. Courtesy Cyrus Read
In This Story
Destination Guide

Volcanoes are famous for their fireworks—sudden, spectacular eruptions, gushing fountains, landscape-eating flows of lava. But often the climatological consequences of these eruptions, especially the explosive ones, are even more impactful. Huge plumes of ash blot out the sun and eventually fall to cover the land, and in human history they’re often marked with crop failures, starvation, and gloom—as well as social upheaval.

Now an international team of archaeologists, volcanologists, hydrologists, and climate scientists is linking an ancient volcanic eruption with a pivotal time in Mediterranean history—around 43 B.C., the time of the transition of Rome from a republic to an empire, and a stretch of unrest in Cleopatra’s Egypt, kicked off by a year where the Nile didn’t flood and crops failed.

“We had a very well-dated ice core record that included volcanic sulfur, and we knew from ice cores way back that there was a major volcanic eruption at about this time,” says Joe McConnell, a snow hydrologist at the Desert Research Institute in Reno, Nevada, and lead author of a new paper on the climatological effects of the eruption, published in the Proceedings of the National Academy of Sciences. “Things were already pretty sketchy, and then you have this big climate shock.”

As massive as Rome was at its height—from baths in Britain to sundials in Syria—its chemical footprint is much larger. Rome’s success can be measured in many scientific ways, including by its lead production, used for pipes, kitchens, and coinage. The archaeological record contains evidence of this, but so does the microscopic record, lead pollution that has been found in ice from the Swiss Alps to the sprawling ice sheet of Greenland.

McConnell’s team took ice, cored over 20 years ago in northern Greenland, and stored in Copenhagen, and flew it commercial to San Francisco, where it was fetched and driven to Reno, to be melted and analyzed. (“We didn’t want the ice to get stuck in customs and melt,” McConnell says of the decision to treat it as baggage.) The scientists were able to extract useful information about the climate at the time the ice was frozen.

The team found that volcanic eruptions occurred in 45 B.C. and 43 B.C., sandwiching the year of Julius Caesar’s assassination. The team also found tephra—rocky detritus spewed by volcanoes—that carries a geochemical fingerprint, which allowed them to home in on a culprit.

As it turned out, the volcano that caused all the ruckus was a massive one, a world away: Okmok, far into the North Pacific Ocean in the Aleutian Islands, nearly 6,000 miles from Rome. The impact of the eruption would have been huge to be felt in the Mediterranean, McConnell says—not exactly a “supervolcano,” but something along the lines of the 1815 eruption of Mount Tambora in Indonesia, which caused the “year without a summer” in Western Europe. Knowing the source of the spewage, the researchers were then able to estimate what impact the eruption would have had in Europe by tracking variation in its fallout.

“If you track the sulfur’s movement around the globe,” McConnell says, “you can map the climate impacts.”

The volcano dropped regional temperatures by 13 degrees Fahreinheit on average—enough to make a spring in New York feel like winter. It’s not hard to imagine what this would have meant for a human society—and how it might have permeated every aspect of that society, from the daily lives of its people to its governmental structure—despite the source being on the other side of the world.

“This is the second coldest year in the last 2,500 years—I mean, that’s not a small thing,” McConnell says. “And when you’re talking about an agrarian society that’s living close to the edge as it is, it had to have had a big impact.”

“It sounds like if you got a big Slurpee, and then dumped it on the ground.”
science

The Alaskan delta, one of the world's largest, is a ‘mosaic’ environment best visualized with a psychedelic palette.
glaciers

A different process than evaporation, sublimation turns snow and ice directly into a gas.
Video • PinDrop