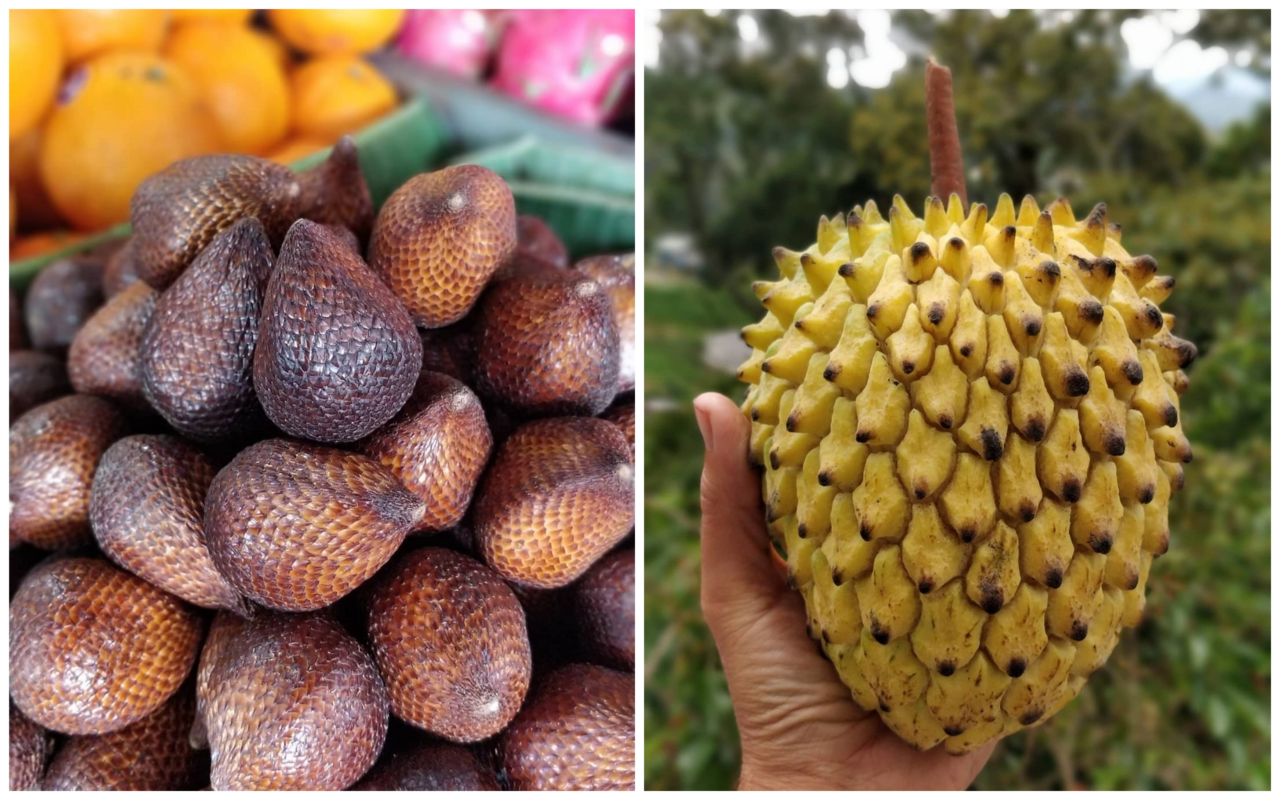 The serpent fruit, salak (left), and the lemon-meringue like rolinia deliciosa (right). All photos courtesy of Pablo Salvatierra

In 2015, Pablo Salvatierra was a 23-year-old Argentinian student struggling with a severe case of a skin disease called psoriasis. With no true cure on offer, his doctors had suggested a four-week fast of no solid food, followed by a permanent change in diet. It was a skinny, skinny Salvatierra who left his bedroom the final day. But, now free of scales, patches, and flare ups, he had a new life goal inspired by his veganism: tasting every kind of fruit the world has to offer.

His vegan, fruit-focused diet was not a one-morning idea. The rashes had affected his skin for years, so, almost in despair, he tried the fast, inspired by old customs of a full psychological and physical cleansing, with the assistance of a professional. (Modern medicine has not found any one diet that prevents the immune-system problems behind psoriasis, but some studies suggest a link, and many patients try changing or improving their diet.) Going vegan would be the final sea change. After 26 days of leaving bed only to go to the bathroom, get some sun, and be checked, he tasted solid food again: He ate some fruit. And decided to never stop doing it.

Salvatierra had a traveler’s spirit, some savings, and a desire to make the most of his new life. So over the past four years—until the pandemic forced him to return to his natal Buenos Aires—he went to 15 countries and tasted nearly 300 different kinds of fruits. So far, he has enjoyed giant fruits that taste like white chocolate, tiny fruits that resemble oysters and pearls, fruits with skin like snakes, and, in every place, unique bonds between people and their environment.

“I was shocked and delighted by local-markets culture,” says Salvatierra, who used to buy all his produce from supermarkets in Buenos Aires. “You can get fresh, tasty, nutritious fruits right from the hands of the family who harvested them in their very own house—people who have trees in the backyard!” This experience has left him with an appreciation for not only the superior taste of homegrown fruits, when compared with industrial-grown products, but the fair commerce of the markets.

Salvatierra documents his progress toward tasting every fruit—depending on how you count, the number of fruits out there is either very large or impossibly large, making his quest somewhat quixotic—on Instagram, where he writes about flavors as he encounters them for the first time. After sampling terap in Borneo, he wrote that it’s not just the vanilla and white chocolate flavor, as well as the texture reminiscent of condensed milk, that makes the fruit, also known as marang, a “heavenly joy,” but how easy it is to open and “the pleasure you feel when each slice melts in your mouth.” He found chempedak similarly engaging—it reminded him of toffee chocolates he ate as a child. “A delirium of pleasure in every bite,” he wrote.

As for the famously smelly and polarizing durian, Salvatierra joined Team Durian. He calls the famous fruit “a sensory ecstasy.”

While Salvatierra’s quest is about him trying every fruit, he is not merely a consumer: The process also led him to learn about the people and lives behind the bounty he is experiencing. When harvesting durian in an Indonesian jungle, he realized the link between the diversity of fruits and the lives of people he was meeting. Modern agriculture, after all, tends to produce a limited number of monocrops, while the farmers and families harvesting more obscure varieties often fed themselves from the jungle, or in the way their ancestors did. “Experiencing cultures in which you can explicitly see how food is so tied to nature has changed the way I perceive myself and my needs,” he says. “I used to live in a city where people do not pay attention to the tastes, rhythms, and value of nature.”

Inspired by his growing appreciation of abundant nature and living in harmony with it, Salvatierra spent his time at home growing a food forest in his parents’ neighborhood. The term refers to a kind of sustainable agriculture that was once common, and is now mainly practiced by indigenous people, although it’s increasingly popular with sustainability advocates. On a friend’s land, he’s growing oranges, mandarins, plums, walnuts, almonds, apricots, peaches, apples, pears, grapefruits, avocados, grapes, olives, and figs.

But travelers do not remain still for long—Salvatierra has entrusted his skinny saplings to others as he heads to Río de Janerio in search of more fruits and flavors.

The Segregated Campground That Was a Refuge for Black Travelers

The Ancient Method That Keeps Afghanistan's Grapes Fresh All Winter

Kangina is simple but effective.
art

Restoring the grounds and its rare, heirloom crops recreated what was effectively the country's first seed bank.
food

Around the World in 125 Melons

It took nine years to grow and photograph all the melons in this book.
Video • Wonder From Home

A bronze sculpture of a monkey sits outside this factory, which has made an anise-flavored liqueur for over 150 years.
Want to see fewer ads? Become a Member.
Related

Kalimullah Khan was inspired by a crossbred rose bush.
Read more
Thanks for sharing!