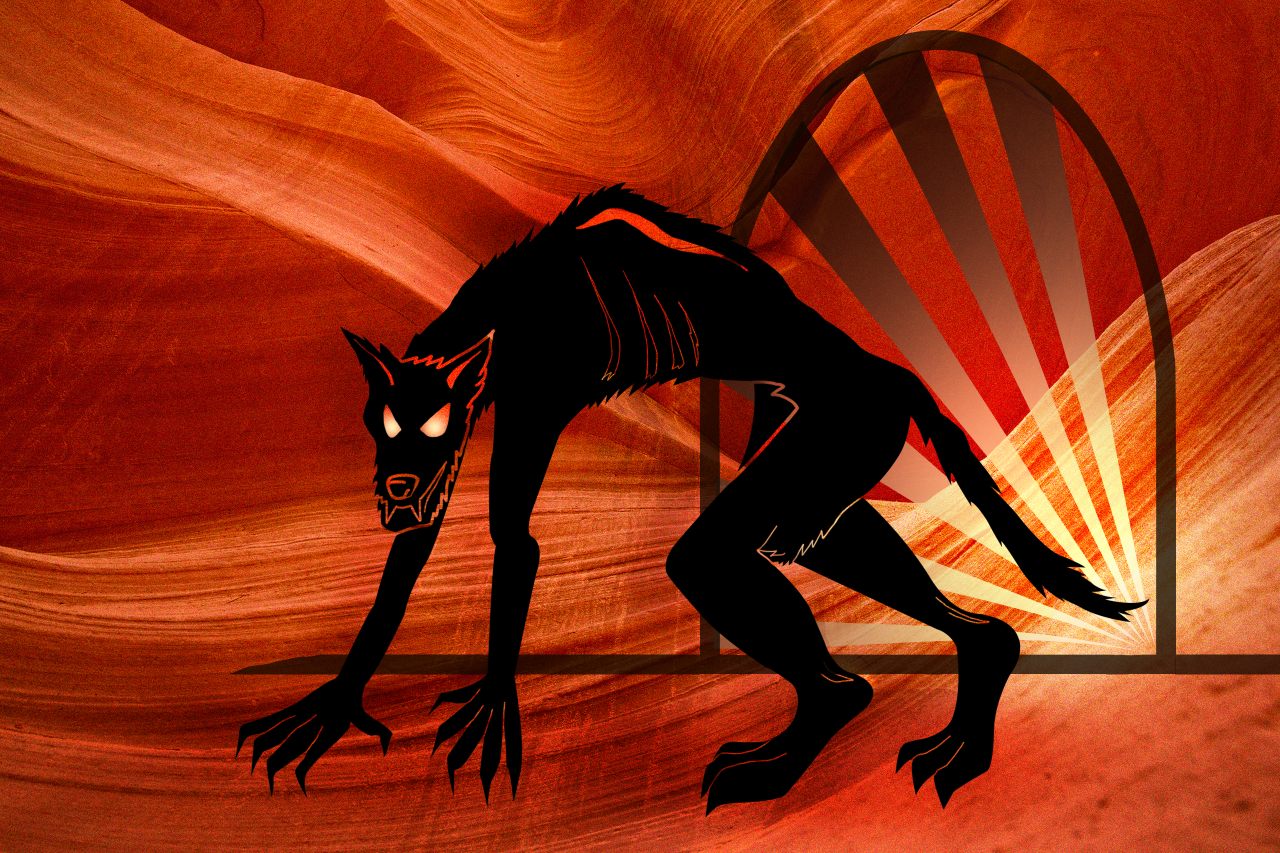 Skinwalkers are not hapless victims who fell prey to dark magic—they want to be monsters. Victoria Ellis for Atlas Obscura

“That’s a door between worlds. My people believe we entered our current world through something like this. It’s also how the skinwalkers get around. Those are our boogeymen,” the guide explained to me. His name was Ryan. He was a young, laid-back Navajo man earning cash as a tour guide while studying music theory at college. He was leading a group of us through Upper Antelope Canyon in Arizona. The size of my tip at the end of the tour was completely in proportion to the beauty of those four sentences.

Skinwalkers are humans that change into animals, often wolves. Because of that, they’ve been lumped into the werewolf category of horror stories and the dogman/wolfman category of cryptids by settlers. Whether a creature is identified as a skinwalker versus a dogman or wolfman often depends on the state where they’re seen—skinwalkers are known throughout the Southwest—and the size of the local Navajo population. However, skinwalkers aren’t tragic characters turned lupine against their will, as in horror stories, nor are they some species of evolutionarily-confusing creature, as in cryptid legends. Skinwalkers want to be monsters.

In Navajo stories, skinwalkers are evil beings. Witches. Human sorcerers of dark magic who attain their status by committing specific atrocities such as murdering a family member. Their defining characteristic is that they can shapeshift into other creatures, such as foxes and coyotes. But mostly they turn into wolves. And unlike other humanoid canines, they can travel via magical doors between worlds, one of which is in Upper Antelope Canyon.

Antelope Canyon is a 660-foot-long slot canyon, a thin passageway created by flowing water on Navajo land in Arizona. It can only be accessed when led by a Navajo guide. The entrance to the upper canyon is in an outcropping of sandstone about 120 feet high with an ominous vertical opening slitting its face. Inside that opening, a winding passage varies in width from several yards to a couple chest-widths wide. The floor is covered with a thin layer of fine sand. Above, the sliver of light that is the top of the crevice is often blocked by twists in the rock wall.

It was beautiful. Enough light filtered in to set a comfortable, ethereal mood, and the walls were gorgeous, almost glowing pink and orange and shaped like frozen waves, as if someone had sculpted the soft sandstone with a cake icing tool. In reality, it was water that had done all the sculpting. Even though the place was bone dry on our visit, it is extremely prone to flash floods. The idea was terrifying even without the werewolf witches: being trapped in that claustrophobic space, underwater, knocked against all the beautiful whorls and outcrops of rock. And that wasn’t just paranoia—people have drowned in Antelope Canyon. In 1997, eleven succumbed to a flash flood there. In 2010, during another flash flood, a group was able to get to safety, but was stranded until the waters abated.

The skinwalker door that Ryan had drawn my attention to was a flat section of rock, about six feet tall, inset into the wall and rounded at the top. It’s nothing I would have noticed on my own, but once pointed out, it did seem like all it needed was a knob. Modern stories of skinwalker encounters don’t involve portals, and, of course, Ryan might have just been having a bit of fun with a wide-eyed tourist, as many Navajo find the subject to be taboo and don’t like to discuss skinwalkers, especially with outsiders.

In 1987, skinwalkers burst into the wider public consciousness when they were used as a defense in a murder trial in Flagstaff, Arizona. The body of a 40-year-old Navajo woman named Sarah Saganitso was found behind the hospital where she worked. A former English professor at Northern Arizona University named George Abney was accused, arrested, and taken to trial. The defense argued that a skinwalker had killed Saganitso, based on the fact that she was Navajo and found with a broken stick across her throat and a clump of graveyard grass near her truck. The defense claimed the two objects were evidence of a skinwalker ritual. Abney was at first found guilty, but then acquitted a year later.

Skinwalkers have continued to capture people’s imaginations ever since. In 2021, a clip was released on TikTok that purported to show a strange, skeletal creature jumping from a grassy patch of wilderness. It gathered six million views and tons of comments hypothesizing that the creature was a skinwalker. In fact, clips with the hashtag #skinwalker have a total of more than a billion views on that social media platform. It’s mostly thanks to one Navajo creator named John Soto, who raised the profile of the creature when, in fall 2020, he posted a series of videos of himself looking for skinwalkers on his Arizona property that went viral and garnered millions of views.

It’s an ancient evil, a horror story, a cryptid, a meme. The skinwalker is a surprisingly versatile monster. And if you want to up your chances of finding one, I can take you to its front door.

Welcome to Atlas Obscura’s Most Haunting Halloween Ever!

This terrifying creature has evolved over millennia—but never lost the need to feed.
cryptozoology

The source of storms and an (occasional) kidnapper, the massive ancient beast has inspired muscle cars and jet fighters.
mythology