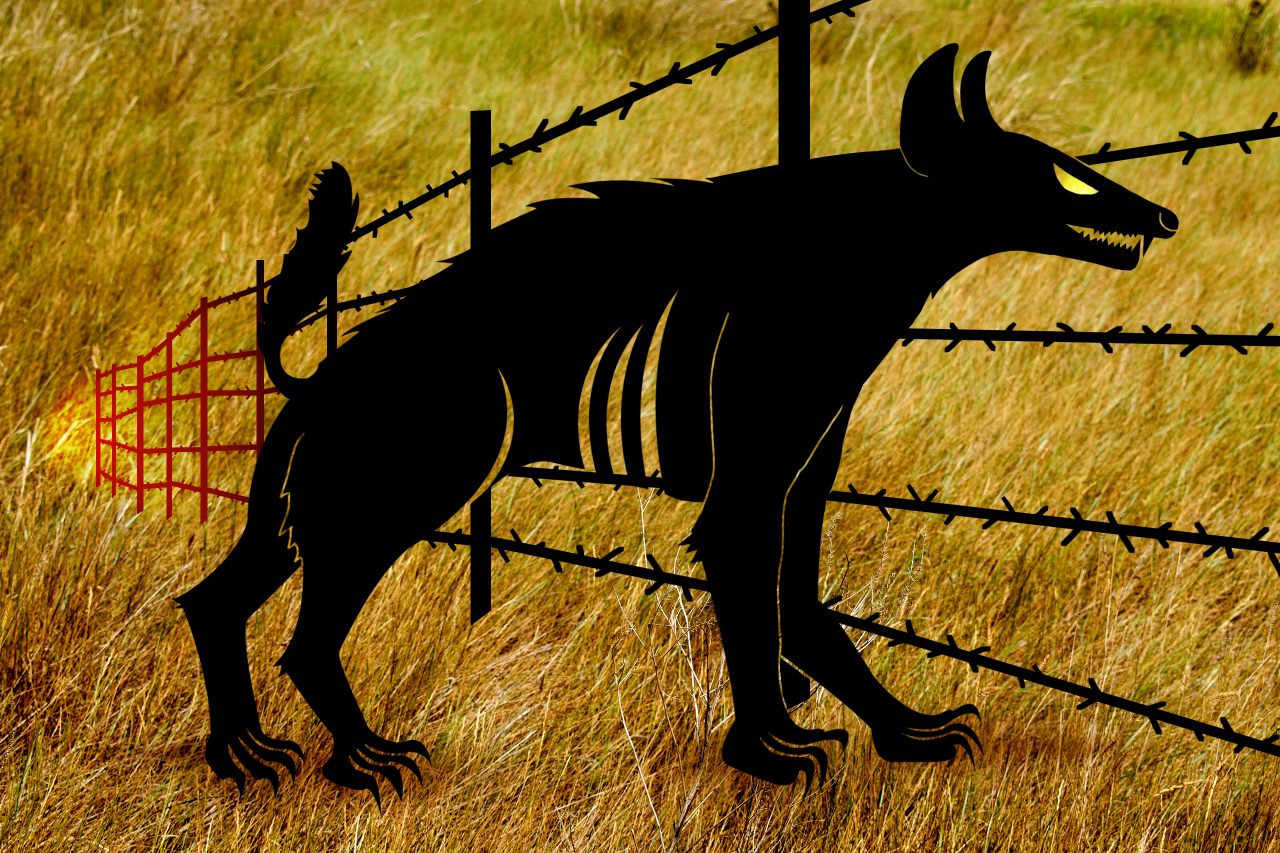 Whether you call it shunka warak'in, the Rocky Mountain hyena or simply the beast, a mysterious canid preyed upon livestock in Montana in the late 1880s. Victoria Ellis for Atlas Obscura

Something has been preying on domesticated animals across the plains of Montana for centuries. It has been given many names over the years, below most of which burn angry red squiggly lines when typed into Microsoft Word: Shunka warak’in. Ringdocus. Guyasticutus. But it’s also been called the Beast and the Rocky Mountain hyena—in fact, any name but wolf, although the creature could easily be called a wolf. Perhaps that’s because wolves were extinct in the state for about half of the 20th century. But that’s a blip in the shunka warak’in’s reign of terror. Whatever they are, they are known to attack dogs and cows and sheep and anything else served up on a fenced-in platter. If only we had a carcass, we could figure out what this creature is once and for all.

Oh, wait. Turns out, we do. It’s on display in a museum in Montana. In 1886, in the Madison Valley of Montana, a settler named Israel Ammon Hutchins had a problem. Something was attacking his animals, and the animals of other farmers and ranchers in the area. Something dark and canine-like that screamed in the night like nothing he had ever heard. One morning he awoke to his dogs barking and jumped out of bed to find the canid chasing his geese. The beast had a dark coat, high shoulders, and a slanted back. Hutchins finally got a shot at it, but missed, killing one of his cows instead. The next time he got it in its sights, though, he missed the cow and killed the cryptid.

Hutchins traded the carcass to a businessman named Joseph Sherwood in exchange for a new cow. Sherwood was also a taxidermist, so he mounted the creature and showcased it in his combo grocery store/museum in Henry Lake, Idaho. He dubbed it a ringdocus, for reasons unknown. The ringdocus outlasted Sherwood and was on display at least into the 1980s. And then it disappeared. Dead cryptids can be as hard to find as live ones.

The only physical evidence of the existence of the stuffed ringdocus was a black and white photo of the beast published in 1977 in the autobiography of naturalist Ross Hutchins, the grandson of the original monster (and cow) slayer. In the photo, the creature looks wolf-like, but not quite like a wolf. Something about the shape of its face and arch of its back is different. The photo was captioned Guyasticutus, which some have offered is a cheeky name for something fake made to sell tickets.

The story of the creature and the frustrating disappearance of its corpse continued to circulate. Meanwhile, Lance Foster, a historic site preservationist, paranormal enthusiast, and member of the Ioway tribe, speculated that the beast could be a shunka warak’in, a canid non-wolf beast from Native American lore that would sneak into camps at night and make off with dogs (the name translates to “carries off dogs”). After one particularly fierce battle with a shunka warak’in, in which the tribe was victorious, they took pieces of its hide to place into sacred bundles that they wore during battle to make them as hard to kill as the shunka warak’in had been. The name took off after it was used by Loren Coleman in his book Cryptozoology A to Z.

Eventually, another of Israel Hutchins’s grandsons, Jack Kirby, got on the case. He learned that after Sherwood’s museum shut down, the entire taxidermy collection was donated to the Idaho Museum of Natural History in Pocatello, where it was all put in storage. Soon after that he learned that one of those taxidermied beasts under the dusty sheets was the shunka warak’in itself. It was four feet long and twenty-eight inches at the shoulder, dark gray in color, with a low head and sloping back. Vague stripes could be seen on its flanks.

Kirby was able to convince the museum to loan it to the Madison Valley History Museum in Ennis, Montana, where it’s been on display for more than a decade. Kirby took it there himself, although he first stopped at his grandfather’s grave to reunite the mortal enemies turned cryptozoology legends. Today, the creature is the museum’s most popular exhibit. They just call it the Beast.

But what is it? The shunka warak’in of legend? A canine mutant? A wolf-dog hybrid, a dog-coyote hybrid, hyena, or hyena-hybrid? Canids are extremely malleable cross-breeders, as anyone who has seen a Frenchie pug knows. Or is it just a bad taxidermy mount? Only a DNA test could tell, and all interested parties have decided not to do that. The mystery of the shunka warak’in has gone on so long that nobody wants to risk solving it.

Only You Can Prevent Sad Pumpkins

This terrifying creature has evolved over millennia—but never lost the need to feed.
cryptozoology

The source of storms and an (occasional) kidnapper, the massive ancient beast has inspired muscle cars and jet fighters.
mythology