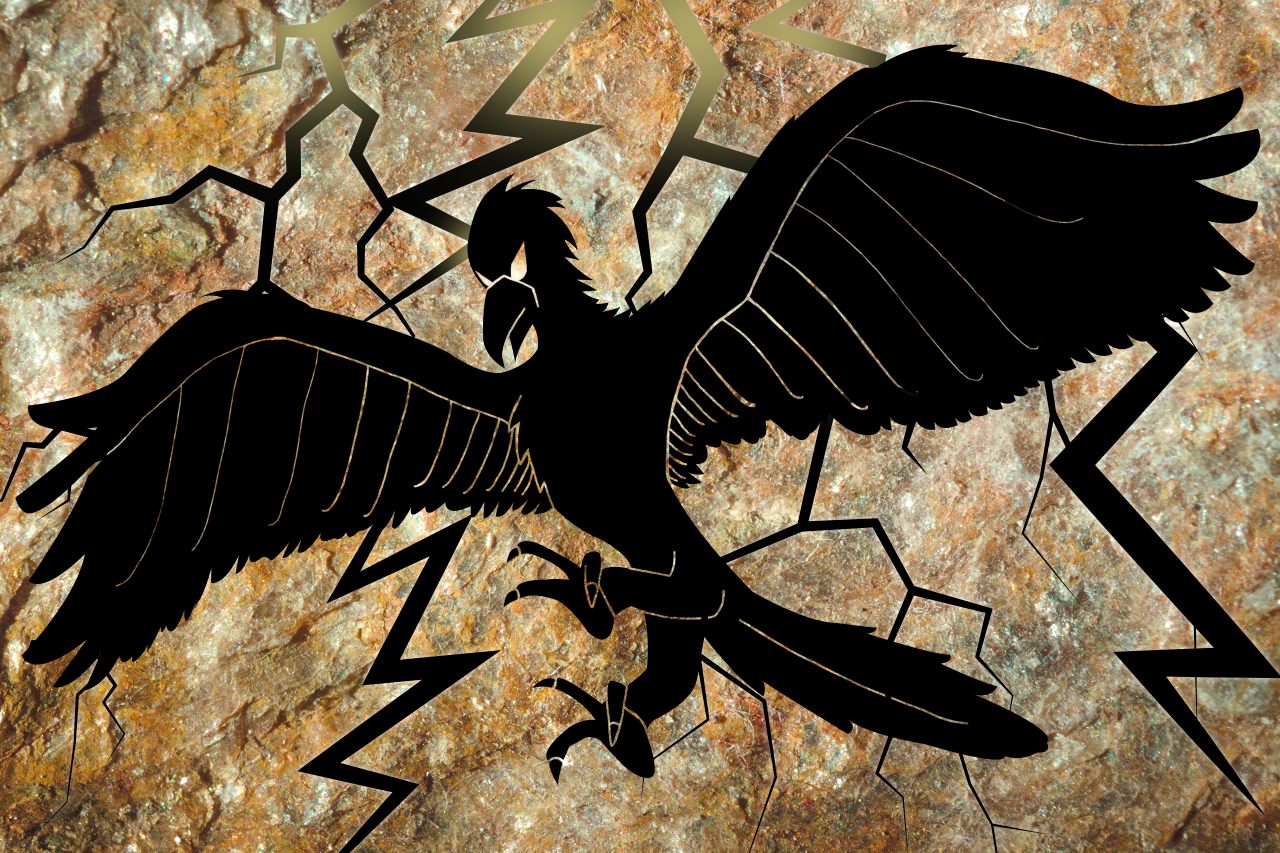 Despite a wingspan of up to 70 feet and legends about them from coast to coast, thunderbirds are a particularly elusive cryptid in North America. Victoria Ellis for Atlas Obscura

The name bigfoot sounds like an insult, dogman like a junior high nickname that sticks with you through college, and don’t get me started on woodbooger. But there’s one cryptid with a name so badass it’s been folded into pop culture to dub other badassery with. It’s the name of a famous United States Air Force jet squadron, a British superhero show from the 1960s, and an iconic sports car from Ford. I’m talking thunderbirds.

Thunderbirds are essentially big birds—big, terrifying birds. According to George M. Eberhart’s seminal Mysterious Creatures: A Guide to Cryptozoology, the wingspan of a thunderbird can be as much as 70 feet. For comparison, the largest bird in North America, the California condor, has a wingspan of 10 feet. The largest bird in the world, the wandering albatross, has a wingspan of 12 feet. You have to go to prehistoric times to find a larger bird: Some teratorns had wingspans of 20 feet. Thunderbirds are bigger than some planes.

As such, it’s a surprise that they’re so hard to spot—especially since thunderbirds are said to darken the sky of every state. They are a continent-wide phenomenon, springing first from the myths and beliefs of numerous tribes, which inscribe images of them into rock and carve them into totem poles. In the lore of the Comanche, Chippewa, and Mandan, among many others, the thunderbird was the source of storms. Its eyes crackled lightning and its wings beat thunder. It was considered benevolent to humankind, but that didn’t make it gentle—it had fierce dust-ups with everything from giant snakes to killer whales.

Thunderbirds are often described as vulture- or condor-like, with dark feathers, a light head, and sometimes a collar of white feathers around its neck. Sometimes, the birds do more than flap around mysteriously; they abduct—usually small animals like calves or dogs, but sometimes children. The most infamous thunderbird abduction (or attempted abduction) of modern times involves a child in Lawndale, Illinois.

On July 25, 1977, 10-year-old Marlon Lowe was playing in his backyard at about 8 p.m. His mother, Ruth, was in the kitchen cleaning up when she heard her son scream. She ran outside and saw two giant birds with wingspans of nine or 10 feet attacking him, pecking at his head and shoulders until one lifted the 56-pound boy 35 feet off the ground. Eventually, both birds gave up on their human prey and disappeared. The incident was seized on by cryptozoologists as being a thunderbird attack. But Illinois isn’t celebrating its near-child abduction by giant birds from the sky. That leaves room for another state to claim the thunderbird as its home cryptid: North Dakota.

North Dakota has a talon up on claiming the thunderbird through its rich Native American art, both ancient and new. In the northwest corner of the state, at the borders of Montana and Saskatchewan, is the Writing Rocks State Historic Site. Beneath a simple awning and protected by a rebar barrier is a humble pair of small granite boulders, each about four feet wide, bearing petroglyphs of thunderbirds thought to be anywhere from 300 to more than 1,000 years old.

Meanwhile, a four-hour drive southeast to the state capital of Bismarck, a modern Native American art installation is keeping the thunderbird alive. In Keelboat Park on the Missouri River is a 20-foot-tall, 10-foot-diameter, storm-gray statue of four life-sized thunderbird heads. Created by seven students from the United Tribes Technical College in town, these fierce-looking creatures glare atop storm clouds, their claws lifted, lightning in their eyes, beaks majestically crooked, ready to take on any orca or giant snake. Around them, placards tell Native American tales of the thunderbird from different regions of the country, as well as more settler-style cryptid tales like the Lawndale Incident.

Those two bookends from uncounted years in the past to modern day, plus the neverending sky of North Dakota, make it a perfect thunderbird state.