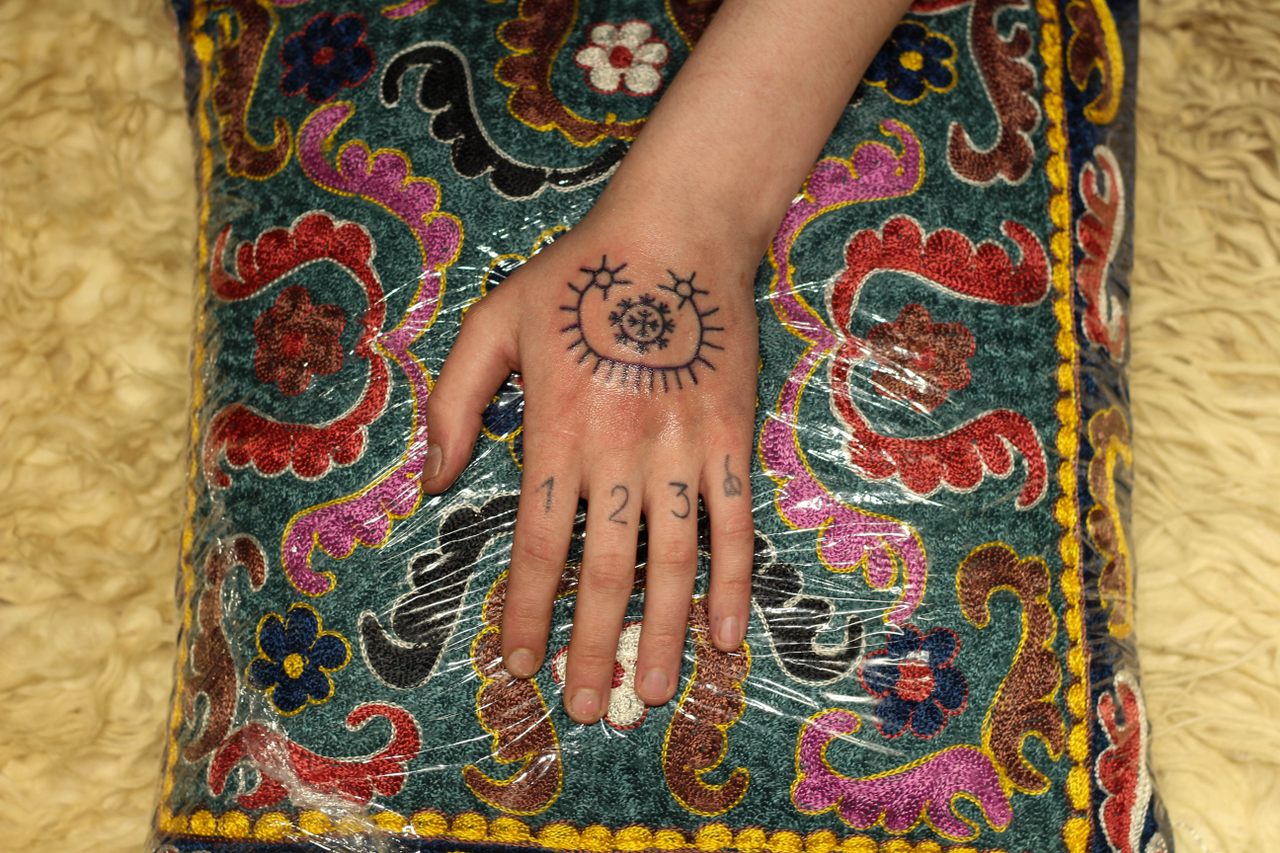 The piece of paper, old and worn, was out of place. It stuck out of a book at the library of the Academy of Fine Arts in Zagreb, attracting the attention of an art history student. The student, who goes by the name OKO, took a closer look at the stray page. Cyrillic text accompanied drawings of hands decorated with curving lines and simple motifs. Radiant suns, crosses ending in forked branches and crescent moons hung with boughs wrapped around wrists, hands, and fingers. OKO had never seen anything like it—but would soon discover it was part of her heritage. “I had no idea we had this tradition,” she says, years later. “And nobody knew where it had come from.”

For millennia, women in what is now Croatia and Bosnia and Herzegovina performed sicanje—the word means, literally, “to prick”—on their daughters. Using needles and a mixture of soot, spit, honey, and breast milk, the tattooing tradition covered the hands, chest, and sometimes forehead with deeply symbolic patterns. In the 1920s, anthropologist Edith Durham wrote that sicanje had passed from one generation of women to the next for nearly 4,000 years. In the mid-20th century however, it vanished. Now, a new generation of Balkan women—and men—is reviving the tradition as part of a larger trend to reclaim and celebrate their heritage.

It’s unclear when or why Bronze Age tribes in the region began tattooing themselves, but it may have been related to religion or social status. “Unfortunately we don’t have any primary sources [about the tradition’s origins]. We only have the Greeks talking about them as their opponents,” says Marija Maracic, coauthor of The Sicanje Project, an oral and visual history of the tradition. Born in Bosnia, Maracic emigrated to the United States as a child and studied art history at Cleveland State University in Ohio, where the project has been archived.

In written histories and on vases and other artwork, ancient Greeks depicted Balkan people with tattoos, and archaeologists working in the region have discovered bronze tattooing needles in 3,000-year-old graves. Some of the ancient designs appear universal, such as the kolo circle, representing family and unity; it shares a name with a traditional dance still performed at weddings and family reunions. Other tattoos, such as a particular combination of motifs, appear to signify a specific village or tribe.

In fact, sicanje symbolized identity but also protection, blessing, and beauty for centuries. As the Balkans became Christianized in the ninth century, the pagan tradition of sicanje evolved to incorporate Catholicism. For example, the kriz, a pagan symbol of the four cardinal directions, became a stylized Christian cross. And while women had traditionally marked their adolescent daughters on the vernal equinox as a rite of passage, they began doing it on the feast day of St. Joseph, which falls close to the arrival of spring.

In the 15th century, sicanje transformed again, this time into an act of resistance. Under Ottoman rule, Christian Balkan families were levied devshirme, sometimes called the blood tax. Boys as young as eight were taken to Istanbul in a system designed to surround the emperor with loyal foreign servants, limiting the power of the Turkish elite. Devshirme were often well educated, and served as high-ranking soldiers and bureaucrats, but they were still far from home.

During this period, Catholic Balkan mothers began tattooing boys as well as girls, marking them prominently with symbols of protection and belonging. And if devshirme ever returned to their village as an adult, their sicanje would identify them, no matter how many years had passed.

As the Ottoman empire waned, sicanje continued on as a mark of beauty and religious and tribal belonging. The tattoos remained most common on women, but some men also carried the marks. In the mid-20th century, however, under the Socialist Federal Republic of Yugoslavia, the tradition of sicanje began to fade. Maracic says modernization, urbanization, and other trends changed attitudes about old customs. Women started to hide their marks, and their daughters declined to receive them. By the 1960s, sicanje lived on only in fading marks on grandmothers’ hands.

In the 21st century, a new generation of historians and artists are rediscovering the tradition. Maracic sees the growing global acceptance and interest in tattoos as a major factor in sicanje’s revival. Popularizing the nearly-lost art is also a way for people to celebrate their heritage and identity in a post-Yugoslavia world.

For OKO, now a prominent outsider artist, that chance discovery in a university library led her to permanently ink the marks on her own skin. The artist’s tattooed fingers and hands have become her trademark, and she has incorporated sicanje into her street art around Zagreb. “I did massive pasteups… around the whole city, exact copies of my tattoos, just blown up,” she says. “So [I claimed the] whole city as mine. It’s my home because we have the same marks.”

Maracic’s research was also initially inspired by her family. “I grew up around all these older women with marks on their hands, and they just tell you, ‘Well, it was something that was always done,’” she says. When she began to research the topic, however, she found very few written sources. So she returned to her childhood homeland to interview the last living women with traditional sicanje, work that took her and coauthor Josipa Karaca to some of the most remote regions of Bosnia. Maracic hopes her work will not only preserve sicanje, but also inspire a wider audience to discover its unique history.

“People like me grew up with it, with a lot of [tattooed] great-grandmothers, but it’s unusual for most people to see,” says Maracic. “It was a true treasure getting to know each and every woman we interviewed. I hope I gave the opportunity to other people to know these women and learn about our traditions.”

The historian behind an online database of eccentric traditions has already visited more than 550 events.
puzzles

Puzzle Monday: Living With the Dead in Madagascar

1:37
Sponsored by Explore Asheville
Want to see fewer ads? Become a Member.
From Around the Web
Atlas Obscura Trips
The Balkans: Landscapes and Memories of Yugoslavia
View This Trip
Thanks for sharing!