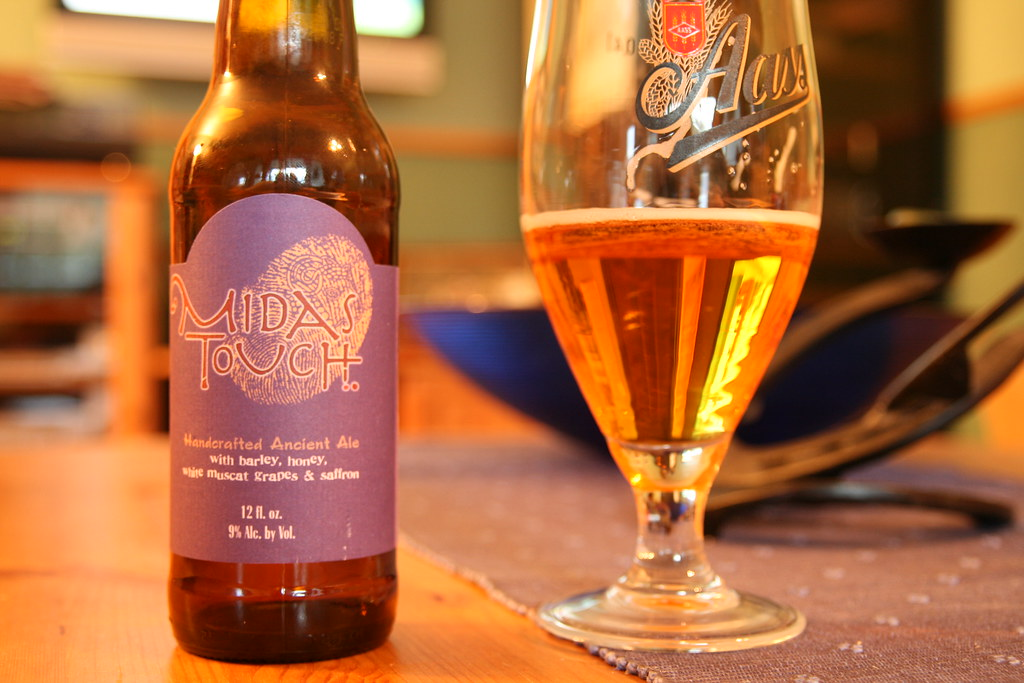 Midas Touch is based off archaeological evidence from an ancient tomb. Bernt Rostad/CC BY 2.0
In This Story
Destination Guide

This article is adapted from the December 4, 2021, edition of Gastro Obscura’s Favorite Things newsletter. You can sign up here.

One recent afternoon, I found myself sitting in the Penn Museum café in Philadelphia, surrounded by students. Some were clicking away on laptops, others were discussing exhibits they’d just visited with friends. I was alone, drinking a strong beer.

Instead of visiting the museum to see priceless ancient objects, I came solely for this ale. But this particular beer was also an artifact of sorts, based on the actual brew once sipped at an ancient king’s funeral 2,700 years ago. Known as Midas Touch, it’s the result of a collaboration between the Penn Museum molecular archaeologist Patrick McGovern and Dogfish Head Brewery.

It all started with the excavation of what may have been the legendary King Midas’s tomb in what is now Turkey. Inside the elaborate grave lay the body of a middle-aged man (perhaps Midas’s father, Gordias, or Midas himself) as well as food and drink vessels.

After chemical analysis revealed grape, honey, and barley beer residue inside one container, McGovern and the Dogfish Head team got to work. The result was a sweet beer-mead-wine hybrid and a partnership that has led to several more ancient ale recreations between the brewery and McGovern.

These concoctions reveal ancient brewing traditions and challenge our notions of what a beer can be. While a beer-mead-wine hybrid such as Midas Touch sounds unusual, history is filled with beverages that defy today’s simple categories. A peek into the past shows drinks far more complex than a typical IPA or pilsner.

Conversation With a Brewer

I spoke with Sam Calagione, the founder of Dogfish Head Brewery, about the art and science of recreating ancient ales. In addition to Midas Touch, the brewery has created beers based on archaeological finds from China and Honduras. His answers have been edited and condensed for clarity.

Q: Why is it important to recreate ancient beers?

SC: I always say that the Reinheitsgebot [a 16th-century German law that still dictates beer standards] is nothing more than a relatively modern form of art censorship. Human beings have been making fermented beverages for over 10,000 years. The Reinheitsgebot is only 500 years young, but within centuries, it changed the commercial definition of beer.

I think that’s unfortunate for the makers who want to put our creative thumbprint on this world with the same omnivorous passion for recipe development as any chef. What really excites me about these projects is that they give people the context that brewers have been using their imaginations literally since the dawn of civilization.

Q: What are some of the differences between ancient and modern brewing?

SC: This time was not only pre-Reinheitsgebot, it was also pre–Louis Pasteur. It was before knowing what a single-cell yeast organism is, what bacteria is. These brewers were alchemists who learned that, “Hey, if I add more natural stuff to this pot, odds are, there will be more bubbling.”

What they didn’t know is the more natural stuff they added, the more likely there was wild yeast and bacteria in it that could ferment what they had. So there’s just this beautiful confluence of ingredients that led to all these ancient mixed beverages.

Q: What kinds of historic beers are you working on now?

SC: We’re always experimenting. We read a story about the evidence of an ancient potato beer, and we just launched a beer called You Can’t Count Calories on a Cold Night that’s fermented with locally grown organic sweet potatoes and ginger. It’s referencing that, a long time ago, tubers, pumpkins, gourds, all these unexpected sorts of starchy vegetables, were also used in the production of fermented beverages.

Q: Are there any ancient ales that you hope to make one day?

SC: I’m always fascinated by how bogs can preserve organic matter—and, literally, people. There is a body so perfectly preserved in a bog in Scandinavia that there is still hair on her.

The sad thing about climate change is that there’s ice melting in places all around the world. But maybe a little silver lining might be that something gets revealed that allows us to capture an undiscovered fermented beverage.

I tracked down a few recreations of historic beers. Here’s how they tasted.

Hops only became a popular brewing ingredient around the 16th century. Prior to that, European brewers flavored their beers with mixtures of spices and herbs like lavender and heather.

This style of unhopped, herbaceous beer is now known as gruit. Based on gruit recipes from the Middle Ages, Cambridge Brewing Company’s Heather Ale is flavored with locally-harvested heather, lavender, sweet gale, and yarrow.

It’s sweet and a little funky in aroma and flavor, almost like a farmhouse ale, but without the peppery dryness of most saisons. At only 5 percent alcohol, it’s nicely light and refreshing.

Midas Touch celebrates the ingredients McGovern detected in those original vessels, resulting in a beer with strong notes of honey, white Muscat grapes, and barley malt. Sweet from the honey and grapes, and slightly toasty from the undercurrent of malt, Midas Touch also has a full, wine-like body from the those residual sugars.

What better way to rally the troops than with a beer recipe? In 1757, George Washington penned a letter to his officers that featured a recipe for his favorite porter.

As part of their “Ales of the Revolution” series, Yards Brewing has produced the first president’s brew. The use of molasses yields a dark caramel flavor, with all the classic chocolatey, roasted flavors you’d expect from a porter. It’s no wonder the future president enjoyed a mug or two on cool nights at Mount Vernon.

To Join This Community of People Who Speak to the Dead, Prepare to Be Tested

Who said Cronk was dead?
beer

The infamous ‘Don’t Ask Cake’ is better than it sounds.
food

This Depression-Era ‘Magic Cake’ Has a Secret Ingredient

This forgotten building was one of the few Philadelphia-area breweries to survive Prohibition.
Genoa, Nevada