To Join This Community of People Who Speak to the Dead, Prepare to Be Tested - Atlas Obscura
Want to see fewer ads? Become a Member. 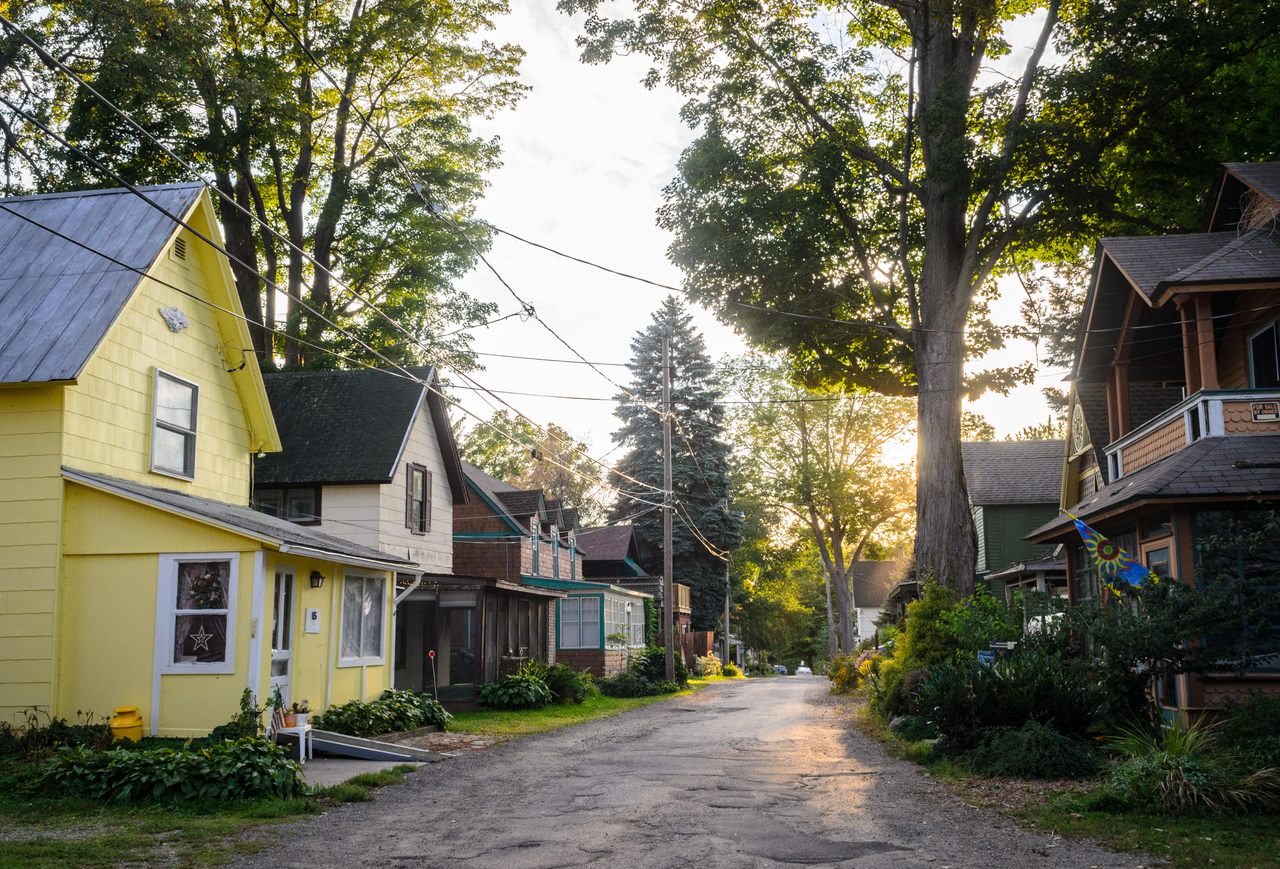 Town full of spiritualists, some of whom are mediums, is still in full swing after 130 years.
Destination Guide

From the outside, this small, rural community in upstate New York looks like many others in the state. Victorian cottages cozy up to one another in various shades of green, white, and yellow. Large red oaks dot sidewalks, stretching their long limbs into a vibrant canopy. But look a bit closer and you’ll start to see the “Medium Open” signs or stumble upon the Healing Temple or the community’s pet cemetery. Welcome to Lily Dale, America’s oldest Spiritualist community.

Lily Dale was founded in 1879 basically as an adult Spiritualism summer camp. People would come, set up tents, and then wait for the dead to arrive. Seances, message services, and classes followed. Back in the late 19th century, Spiritualism was flourishing, with more than a million followers. Arthur Conan Doyle, creator of Sherlock Holmes, actress Mae West, even Thomas Edison (maybe) all joined in. The basic tenet of the religion is that “life is continuous—in other words, we never die, we just change states of being. As a science, Spiritualism is committed to proving the continuity of life by communicating with spirits who have passed on,” writes Lily Dale medium Janice Dreshman.

What began as that tented summer commune now is a small hamlet, with about 250 permanent and semipermanent residents, many of whom are registered mediums. For about $80 to $100, you can sit down with a Lily Dale medium as he or she relays messages from family members and friends who’ve passed on, at least until your half-hour is up.

All Lily Dale mediums are members of what’s called the Lily Dale Assembly, made up of members from around the world. And while all members are Spiritualists, not all members are mediums. Some members live and work in Lily Dale. Others don’t. All members can vote on Lily Dale building decisions, community matters, and who is elected to the Assembly’s Board of Directors.

The Board doesn’t allow just anyone to waltz in and start giving readings, though. Lily Dale requires all mediums to go through a rigorous testing process to be registered and allowed to set up shop. Today, there are 36 registered mediums at Lily Dale. Some, such as Gretchen Clark, have grown up in the community. Most, though, have bought homes and moved in. Regardless, all the mediums at Lily Dale had to hone their skills and pass numerous tests before they were allowed to charge visitors for readings.

In the early days of Lily Dale in the late-19th and early-20th centuries, becoming a registered medium “was based totally on competency,” says Elaine Thomas, a registered Lily Dale medium for 37 years. If you could talk to dead people, you were in. To become a medium today though, “there’s a lot of volunteerism,” says Dreshman, who’s been a registered medium since 2005. Many of the programs on offer at Lily Dale are only possible because community members donate their time.

Every summer between June and September, Lily Dale welcomes an estimated 30,000 visitors. Some are searching for healing or spiritual guidance. Others come out of curiosity or skepticism or because they didn’t have anything else to do on a weekend. “There could be a few thousand people on the grounds on the day and all kinds of activities going on, outside and inside,” says Thomas. Every day at 1 pm and 5:30 pm, two outdoor message services are held at the Inspiration Stump, a spiritually charged, concrete-covered tree stump. At 4 pm, another service is held at the Forest Temple, a white-and-green outdoor structure that dates back to 1894. Monday Night Circles, where mediums give readings in small groups, are held every week at 7 pm. Needless to say, there’s always a need for mediums to volunteer at these events—a way to show the Lily Dale community what they got and demonstrate a commitment to its ethos. “In the year prior to testing,” says Dreshman, “I probably helped out with 27, 30 message services.”

At these services, a medium gets up in front of an audience and, after a short prayer or meditation, starts listening for dead people. “I’m getting a Mary. Marie? Maybe an Aunt Mary? Can anyone claim a Mary?” There’s a beat or two of silence, and then (most of the time) someone raises their hand in the audience—Mary was their grandmother. (When no one raises their hand, most mediums chalk it up to a spirit visiting someone nearby and efficiently move on to the next otherworldly guest.) Then the medium is thoughtful, as if listening to the faint strains of a phone call on a bad line. “Mary wants you to know that she’s always watching over you and that she’s walking beside you in this life. Thank you for visiting us, Mary.” And then Mary leaves and the medium continues her work as panel moderator for the afterlife.

For mediums who want to be registered at Lily Dale, volunteering doesn’t just mean offering messages. Sometimes they act as greeters or help out with community events, says Dreshman. But when a new medium does take the stage, a more experienced one is often watching to evaluate the newbie’s work.

“You have to go and just sit in line and then you’re called up to give a few messages, maybe two, three, whatever, and hopefully the medium who is chairing the service makes notes about what kind of a job you did,” says Patricia Stranahan, a registered Lily Dale medium for 15 years. Those evaluations “all go into the record if you’re going to become a registered medium.”

Typically, new mediums will spend one or two summers volunteering, says Thomas, but many do much more than that. Thomas did it for almost a decade: “I spent every summer but one there in the 70s.”

As Labor Day approaches, Lily Dale’s season comes to a close. No more tourists come to hear from their favorite dead aunt, and the daily and weekly services stop. But for mediums seeking registration, that marks the beginning of their final test—going in front of the Lily Dale Board of Directors.

The Lily Dale Board is comprised of seven volunteers that the Assembly votes into office. They are often some of the most respected and long-standing members of the community. The Board runs Lily Dale, coordinating everything from building renovations to membership. But perhaps the Board’s most important job is testing new mediums.

“I was pretty nervous,” remembers Thomas. Waiting in an outer office, “I just let myself relax and meditate and just decided I’m going to do the best I can to connect with Spirit for them.” Then she was ushered into a room with a long table surrounded by the seven members of the Board. “Once I got in there and said my prayer, everybody was very welcoming and I gave my seven messages,” each around three-to-six minutes long. “I could tell it went well. They kind of looked around the boardroom at each other and they told me they were pleased to have me on board as a registered medium.”

Stranahan and Dreshman didn’t have the benefit of being told their results on the spot. They had to wait for a phone call. Dreshman remembers waiting a week or two before Lily Dale medium and then-Board Member Tom Cratsley finally called her up to say, “Congrats, Jan!”

The requirements to become a registered medium have morphed and shifted through the years. Stranahan remembers that for her test, “You had to do an individual reading” with Lily Dale members. “They would go over how accurate you were and what you said and they would put forth recommendations or not.” Regardless of when or how you earned your registration, “Every year you have to renew your authorization to give messages there in your home,” says Stranahan.

The number of people seeking registration every year varies. “Sometimes there are three, four, five, or more perhaps. Sometimes there’s none,” says Stranahan. “It just depends.”

A lot has changed at Lily Dale since the 1800s. Now mediums do readings for people all over the world via Zoom. But, for Dreshman, the intention of the community has stayed the same: “All I do is to be of service.” Thomas doesn’t think it’s a coincidence that Spiritualism reached its zenith against the backdrop of the American Civil War and World War I. “Spiritualism grew out of people’s pain,” she says, and their subsequent need to find healing. “Spiritualism and mediums demonstrate that life continues beyond the grave.” In an uncertain world, the mediums of Lily Dale are there to provide a little certainty.

Join us for a daily celebration of the world’s most wondrous, unexpected, even strange places.
vampires

Podcast: Listener Encounters With the Unknown

4:16
Want to see fewer ads? Become a Member.
From Around the Web
THE GASTRO OBSCURA BOOK
Taste the World!
An eye-opening journey through the history, culture, and places of the culinary world. Order Now