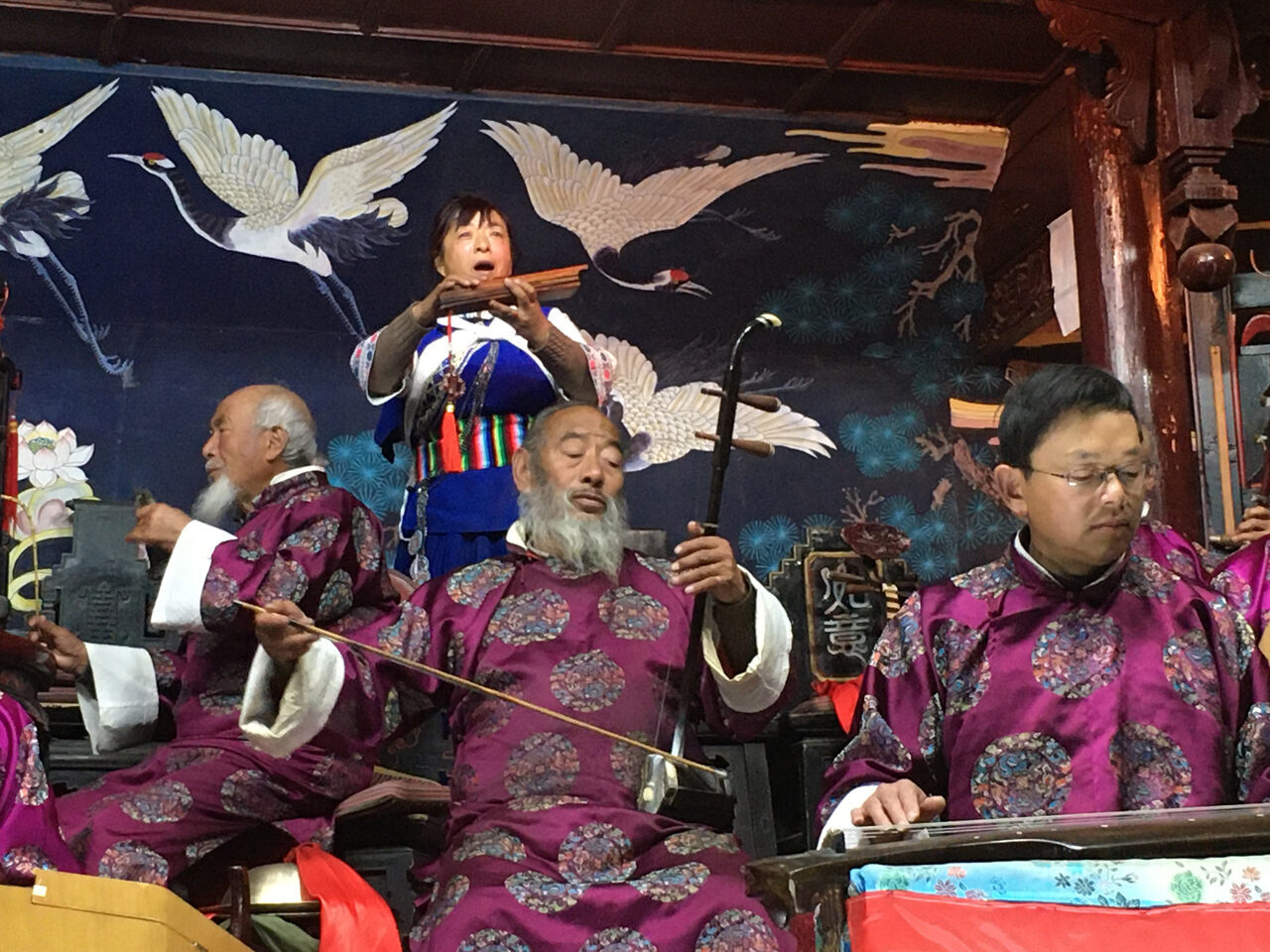 These Naxi musicians play without sheet music on centuries-old instruments, which were once hidden underground during the Cultural Revolution. Amy Zhang

Every night at 8 p.m., around 20 elderly musicians in formal purple gowns take the stage in Naxi Concert Hall, a 400-seat theater in Old Town Lijiang, China. Painted white cranes drift across the indigo walls. A young woman introduces the band in Chinese, then English, as the “Dayan Naxi Orchestra, reformed in 1981 by our master Mr. Xuan Ke!” Then come the thumping beats of the da gu, a drum as big as a person.

The centuries-old instruments on stage were once hidden underground during the Cultural Revolution. Now, they breathe life into ancient songs of longing, rebellion, and celebration that the musicians play without sheet music—majestic melodies that have been passed down orally, generation after generation. A small bell rings over and over, as if calling forth the band. Then come the shrill notes of the dizi bamboo flute, followed by voices slowly rising in a minor key. Various Chinese fiddles, a nasal bobo flute, and a set of yunluo “cloud gongs” join in, as do three kinds of plucked lutes that include the qu xiang pipa, a pear-shaped instrument that is considered native to the Naxi people. The band members play reverently and fervently, and when several elderly men stand up to sing solos, their voices vibrate throughout the wooden space.

All too often, however, this vast music hall is almost empty. This period in the band’s life is a far cry from its roaring popularity in the 1990s, when it was led into the global spotlight by its band leader, Xuan Ke. On an evening in January, just five audience members are in attendance to give a standing ovation.

Naxi culture has turned Lijiang, a city in the southwestern province of Yunnan, into one of China’s top tourist destinations. You can ride horses along the ancient tea route, dance with Naxi elders in traditional flower-adorned clothing, and eat, shop, and sleep in Old Town Lijiang, with its ancient trickling canals and pagoda-roofed guesthouses. It’s easy to think of China as a homogenous nation, but the country is home to 110 million members of minority ethnic groups. In Lijiang, around 20 percent of the population is Naxi, an ethnic group with its own distinctive language and a religion called Dongba, a form of shamanism influenced by Tibetan Buddhism.

On Sifang Street, between stores selling traditional, indigo-dyed clothing and rose pastries, a bright teal sign proclaims “NAXI CONCERT HALL” in gold letters. In the rickety back room of the music hall, where gowns and instruments hang on the wall, 90-year-old Xuan Ke sits next to a space heater and speaks slowly, in perfect English. Regarded as the defender of Naxi culture and the father of Naxi music, he is now in a wheelchair; he isn’t able to get on stage for every concert to offer lively commentary like he used to. “I learned classical Western music first,” Xuan says. “Piano and organ at age six.”

In a palm-sized booklet that doubles as a concert ticket, a 1931 photo shows plump baby Xuan in a wooden washbasin. The son of a Tibetan singer and the first Naxi man to speak fluent English, Xuan grew up with German nannies and Western missionaries in Lijiang. His father, Xuan Ming De, guided Western expeditions to the Yunnan-Burma border, including one with Theodore Roosevelt’s two sons. (They supposedly tipped him so well that the family was able to add a second story to their home, according to the travel writer Gretel Ehrlich.)

But during the Cultural Revolution, which started in 1966 and lasted a decade, the Chinese government persecuted Xuan Ke for his Western associations. He doesn’t talk much about the many years he spent in a labor camp, but says that his interest in traditional Naxi music came after his release. “When I was released, I came back to my home here and learned this traditional Naxi music,” he says. “Before, every village had this kind of orchestra band, but during the Cultural Revolution they had to bury their instruments. I reorganized them.” Xuan managed to convince a group of 40—a mix of teachers, artisans, and farmers—to come together and play again.

Starting in 1988, the orchestra had “spectacular success at home and abroad,” and helped draw visitors to Lijiang, according to Helen Rees, professor of ethnomusicology at the University of California, Los Angeles. Their concerts proved extremely popular to overseas and mainland Chinese tourists who wanted an experience of Naxi culture. In 1995, the orchestra undertook their first international tour in England, where they played to packed audiences in the Purcell Room, the Royal Northern College of Music, and hosted demonstrations at Oxford and SOAS. Given his charismatic personality and flawless English, Xuan was the perfect figure to introduce Naxi music to Western audiences.

Both Western and Chinese sources covered the tour enthusiastically, Rees writes in her article “Naxi Ancient Music Rocks London.” A Chinese government official, in awe of the Oxford visit, wrote, “That Naxi Ancient Music and Naxi scholars could reach the performance and lecture hall of a world-famous university like Oxford is not only unprecedented in Naxi history, it is also a rare occurrence even in Chinese history.” Invitations to festivals in Norway, France, the U.S., and 12 other countries followed.

The foreign acclaim brought pride and a bigger spotlight back home in China, legitimizing this otherwise marginalized ethnicity. After Old Town Lijiang was designated a UNESCO World Heritage Site in 1997, the government quickly created an agency to oversee the physical reconstruction of Old Town, preserving some parts of Naxi architecture but also commercializing the area. In 1999, Jiang Zemin, the President of China, visited the concert hall and announced, “We should spread this music to the entire world!” At the same time, rising prices and incoming Han residents soon pushed the Naxi out of their homes, and now about 70 percent of the stores in the Old Town cater solely to tourists.

Lijiang’s newfound popularity had some benefits. In the 1980s, the Yunnan government funded a conservation project for the Naxi script, Dongba, which is the only pictographic writing system in use today. Ni Qian Yu, a cheerful 22-year-old, now sells Dongba-Chinese-English dictionaries and paper goods made from a local shrub, Wikstroemia canescens, at one of the popular Dongba Paper Goods stores in Old Town. Fewer than 300 people, Ni included, can read and write the script today, and he hopes the script will endure.

According to one of Xuan Ke’s ticket sellers, the Naxi orchestra’s attendance started declining in 2014, when “Lijiang Eternal Love,” a show with 4,700 moving seats and IMAX screens, opened a few kilometers away. Housed in the “Dongba Culture Theme Theater,” the nightly show is a main attraction of the Lijiang Songcheng Tourist Area, a new government-launched cultural theme park. In the show, laser beams stream across the stage while Naxi warriors save their damsels in distress; Tibetans and Indians dance happily in technicolor verdant fields.

In government-produced media, “minorities get exoticized, somewhat like the ‘noble savage,’” explains China specialist Dru Gladney to the BBC. “On the one hand they are seen as backward and on the other hand they are romanticised and seen as pure.” This show is no different, and unlike the Naxi orchestra, it’s backed up by millions of dollars from tourism companies and the government. “That new stuff … it is nothing,” says Xuan. “They do it for money, not for art. This here is real Naxi music from real Naxi people. But it is hard to appreciate.”

Xuan pays his musical collaborators 1700 Chinese yuan, or about $240, each month. Only two members are below the age of 50, and there are four performers who are at least 80 years old. “The government has not ever given one single coin,” he says.

When asked whether he’s hopeful about the future of Naxi music, Xuan says bluntly that he is not. “No one knows how to appreciate it,” he says. “Except you.” He laughs. After 20 minutes of conversation, his eyes are starting to shut. Next door, five men with wispy white beards sit and wait for the start of the show, silent except for the clacking of jade hand massage balls. One looks asleep. A qu xiang pipa sits upright in the corner. In 10 minutes they will don their purple gowns and become the bearers of ancient Naxi music—for the few who are willing to listen and remember.

The Language Used Only by Lake Kivu's Fishermen

As they paddle out each night, they sing in a disappearing language.
islands

Just 10 men are permitted to hunt and pickle 2,000 young seabirds on a desolate island each year.
farms

Podcast: The Village Where Every Person’s Name Is a Song