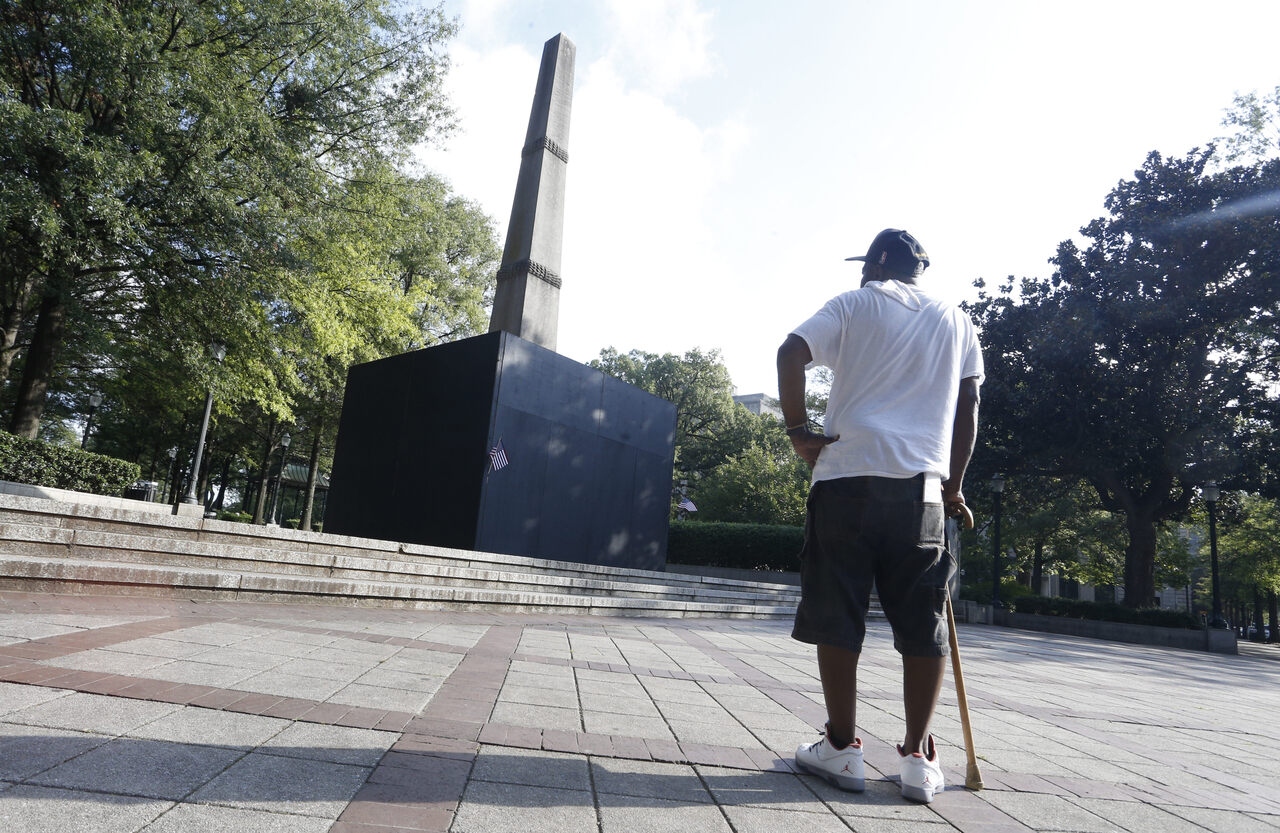 The monument, pictured here in August 2017, was once partly covered by wood. It has since been dismantled altogether. Hal Yeager / Stringer / Getty
In This Story
Destination Guide

Last week, as protests against police violence and systemic racism were spreading across the country, activists took aim at monuments around the American South. Some toppled a monument in Linn Park in Birmingham, Alabama, and covered the neighboring Confederate Soldiers and Sailors monument, a five-story obelisk, in graffiti. They communicated their distress in red and black letters, scrawling #BLM, the “Black Lives Matter” hashtag, across the monument’s base. They climbed the obelisk and tried to topple it, too. They wanted the thing to come down.

More than 150 years after the Civil War, symbols of the Confederacy, and thus of racism and violence against African Americans, remain visible in public spaces and in the names of highways, bodies of water, and other places named after Robert E. Lee, Jefferson Davis, and “Stonewall” Jackson, among others. By the Southern Poverty Law Center’s count, at least 114 plaques, statues, or other symbols have been removed since 2015. (The organization began tracking these figures after a white supremacist murdered nine black worshippers at a church in Charleston, South Carolina, the New York Times reported.) Even so, more than 770 Confederate monuments remained as of February 2019, with the largest number in Georgia, Virginia, North Carolina, Texas, and Alabama.

The Confederate Soldiers and Sailors Monument, in Birmingham, has been a particular flashpoint. A few years ago, the city built 12-foot-tall plywood screens around the base of the monument to hide celebratory inscriptions, such as “The manner of their death was the crowning glory of their lives.” But the Alabama Supreme Court unanimously ordered the screens to come down, NPR reported, deciding that the barriers violated the Alabama Memorial Preservation Act, which protects monuments that have stood on public property for at least four decades. This includes monuments to the Confederacy. The cornerstone of the Birmingham monument was laid in 1894, and the structure was dedicated in 1905.

Many monuments—Confederate and otherwise—are obelisks, and fit into a longer American tradition of borrowing gravitas from faraway places and the distant past. “In the 1800s, America was desperate to look like it had been around for a while,” the journalist Kat Escher once observed in Smithsonian. Historically, in ancient Egypt, “obelisks served as statements of political power, as an expression of a ruler’s ability to rearrange the past, and as victory monuments and symbols of elite self-promotion,” writes the archaeologist Paul Rehak. That was appealing to the builders of a young nation. Writing for Vanity Fair, Bruce Handy recounted how, for American designers and architects in centuries past, Egyptian-inspired structures evoked ideas of “permanence, stability…and the type of solid, well-built structure that remains standing through the ages.” (No wonder the Washington Monument, which was built between 1848 and 1884, is shaped like an obelisk, too.)

On May 31, as anger and grief swirled and protests targeted the Confederate Sailors and Soldiers monument, the Egyptologist Sarah Parcak tweeted a winking-but-informative guide to pulling down an obelisk. She emphasized that she meant the ones that “might be masquerading as a racist monument”—not the Washington Monument, and certainly not bonafide antiquities. Parcak wrote that it was all “hypothetical,” but added, “There might be one just like this in downtown Birmingham! What a coincidence. Can someone please show this thread to the folks there.” (She couldn’t immediately be reached for comment.)

Obelisks look simple—tall, skinny rectangles with triangles on top—but are famously hard to wrangle. In ancient Egypt, they were often painstakingly quarried in a single piece, hauled off on sledges, and loaded into sturdy barges; they often weighed hundreds of tons and stood dozens of feet high. (When an Egyptian obelisk later traveled to Central Park, it is said to have wound through the streets of 19th-century Manhattan at just 97 feet per day.) The heft makes them hard to topple, so Parcak recommended looping metal chains around the obelisk and affixing rope to those chains. Two lines of people would need to flank the obelisk, she wrote—maybe 40 people, total, for every 10 feet of monument. Each row would need to stand about 30 feet from the base, and then start rocking back and forth. She included a hand-drawn, “rough schematic” of two groups of stick figures apparently playing tug o’ war with an obelisk, which was labeled “racist monument.”

In the end, protestors didn’t dismantle the Birmingham monument—the city did. Earlier this week, crews took it down, piece by piece. Cranes lifted the heavy stone onto the bed of a truck, and crews laid the segments on their sides. Public information officers from the office of Birmingham’s mayor, Randall Woodfin, did not respond to Atlas Obscura’s requests for comment about where the pieces of the monument would go, or who would become the custodian of them. The state’s attorney general has already filed a lawsuit against the city for violating the Alabama Memorial Preservation Act, and the city has been charged a $25,000 fine for removing the monument. Meanwhile, other symbols of America’s troubled past stand as reminders of injustices that are as old as the country itself.

Keeping Track of Monument Removals Could Be a Full-Time Job

So data scientist Emily Gorcenski created When They Came Down to crowdsource the stories behind the topplings.
archaeology

Unearthing the True Toll of the Tulsa Race Massacre

99 years later, a community works with archaeologists to answer longstanding questions about a brutal tragedy.
cemeteries

She's the only woman veteran honored with a monument at West Point. But where was she buried?
immigration

How a Japanese Family Jumpstarted Rice Farming, Deep in the Heart of Texas

It was eventually stifled by nativism and border anxiety.
Video

Cagey about his methods, John Wallis was a bit of a cipher himself.
Read more
Thanks for sharing!