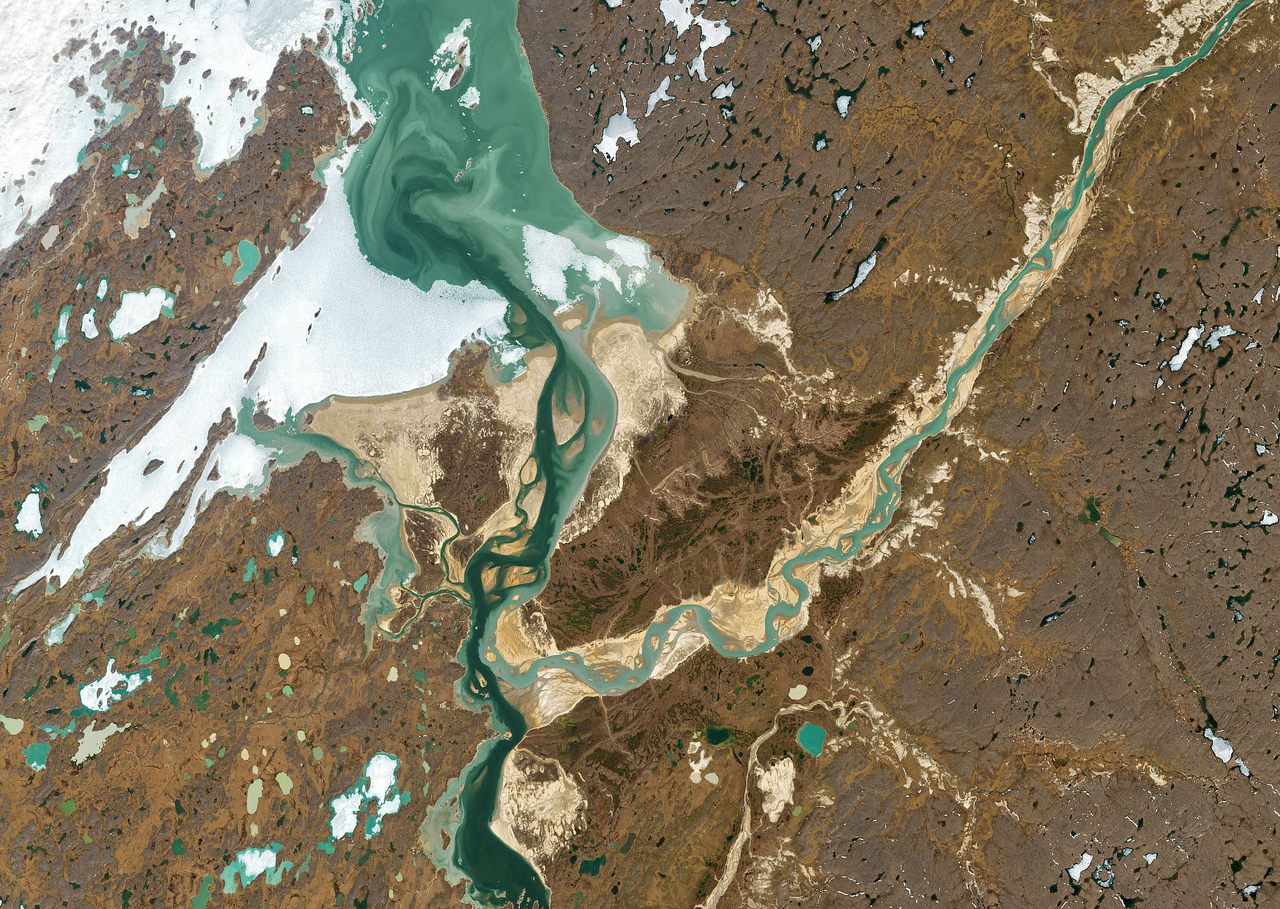 Amid ice and tundra, the lighter Hayes River flows from the northeast (top right) into the dark Back River in Nunavut, Canada, but remains distinct from it for 10 miles. Joshua Stevens/NASA Earth Observatory
In This Story
Destination Guide

Like partners doing a tango, two rivers in Nunavut, Canada, become a single unit without losing their individual appearance as they move sinuously across the tundra. The darker Back River flows north toward the Arctic Ocean. Along the way, its tributary, the Hayes River, a light, milky blue, joins it but remains visually distinct for about 10 miles beyond the confluence. Only when the merged rivers enter their final destination of Chantrey Inlet do the waters begin to blend.

This phenomenon of two rivers that are joined yet distinct is the result of conditions upstream, including differences in density and velocity. The Back River flows briskly for nearly 1,000 miles, over rapids, waterfalls, and other features, through a flat landscape dominated by moss and lichen. As a result, its water remains relatively clear. The Hayes, however, runs through areas of active erosion, and is full of silt, clay, and other material it picks up along its 200-mile course to where it meets the Back.

Chantrey Inlet, where the rivers enter the Arctic Ocean as one, sits south of the storied Northwest Passage, the elusive historical maritime route that drew 19th century European explorers such as the disastrous Franklin Expedition, which vanished in the 1840s. In 1854, during a mapping expedition of the greater Chantrey Inlet area, Scottish surgeon-turned-adventurer John Rae learned the first clues about the fate of those aboard Franklin’s ships, HMS Erebus and Terror. Members of a local Inuit community told Rae that European men had been seen a few years earlier, moving south on foot.

A handwritten note found by another expedition in 1859, more than a hundred miles to the north on King William Island, refers to surviving crew members of the lost Terror and Erebus setting off for the mouth of the Back River, possibly to follow it upstream to a distant outpost of the Hudson Bay Company. There is no evidence that any of the men made it to their destination, however.

The Alaskan delta, one of the world's largest, is a ‘mosaic’ environment best visualized with a psychedelic palette.
volcanoes

Are Twin Volcanoes Double the Trouble?

They come in pairs more often than you might think, but generally aren’t twice as dangerous as the solo acts.
science

Often associated with Earth’s hottest places, these whirling columns show up on all seven continents—and beyond.
List

12 places to marvel at the history of human language.
Video

3:07
Want to see fewer ads? Become a Member.
From Around the Web
Atlas Obscura Trips
Seeking the Mysterious in Winnipeg
View This Trip
Thanks for sharing!