The Curious Case of the Arctic Desert Island That's Not Actually an Island - Atlas Obscura
Want to see fewer ads? Become a Member. 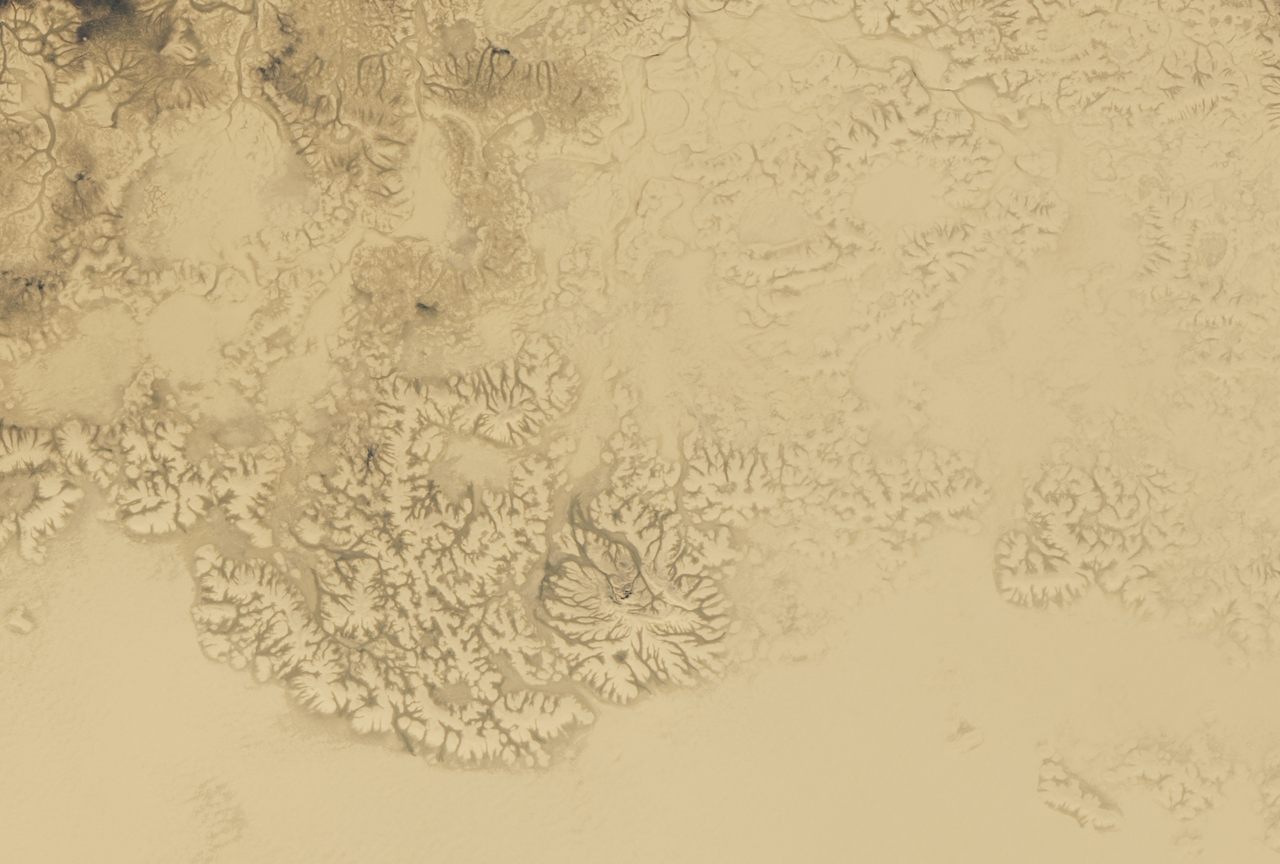 The Sahara? Nope. Bunge Land, a geological curiosity north of Siberia, at the edge of the Laptev Sea. Lauren Dauphin, NASA/Public Domain
In This Story
Destination Guide

You would be forgiven for expecting camels, or an oasis, maybe. In full summer sun, the vast, flat stretch of pale sand is nearly featureless, broken in places only by what appear to be low dunes, or perhaps the dry beds of ancient rivers. It might be mistaken for the Sahara, or the Arabian Peninsula’s famous Empty Quarter, also known as Rub’ al Khali, the largest continuous sand desert on the planet. But this is Bunge Land, Zemlya Bunge in Russian, a 2,400-square-mile desert north of the Arctic Circle. And no one is entirely sure how it got there.

“Currently, there is no consensus among geologists,” says Andrei Prokopiev, a geologist with the Russian Academy of Sciences who has done fieldwork on the New Siberian archipelago, where Bunge Land is located. With some understatement, he adds, “There are different points of view.”

Bunge Land remains a question mark because its remote location and inhospitable climate make it difficult to study, and because the underlying geology of the area is particularly complex. The clock may be running out on our chance to figure out this mysterious landform. As climate change intensifies, so do the spring and summer storms that periodically flood much of this Arctic desert with seawater. Rising sea levels may soon claim Bunge Land for good.

For now, Bunge Land sits roughly in the center of the New Siberian Islands, which are scattered several miles off Russia’s northern coast, where the Laptev and East Siberian Seas meet. The rugged archipelago is home to Arctic fox, lemmings, and, in summer, migratory birds—but not much else. The rest of the New Siberians are tundra-topped layer cakes of permafrost that’s now thawing. As the compressed layers of ice and once-frozen soil melt, the islands’ dark and ragged coastlines slump, chunk by chunk, into the frigid water. But not on Bunge Land.

Wedged between two of the larger islands, Kotelny and Faddeyevsky, Bunge stands in stark contrast. While Kotelny has a range of modest mountains reaching about 1,200 feet in elevation and Faddeyevsky tops 200 feet in places, most of Bunge Land is less than 20 feet above sea level. In fact, the earliest recorded explorers of the region, in the late-18th and 19th centuries, missed Bunge Land entirely.

“The first travelers came there by ice when only Kotelny and Faddeyevsky were visible,” says geologist Alexander Kuzmichev, also at the Russian Academy of Sciences. Kuzmichev knows firsthand that missing the vast Arctic desert between the two islands is easy to do. “I have been on Bunge Land only once, in early June,” he says. “The sea was under ice, the land under snow, and there was no definite border between.”

When people finally did notice this strange place, they named it after scientist Alexander von Bunge, who had led an expedition in the New Siberians in 1886. Noticed and named at last, Bunge Land presented another challenge: figuring out what it was and when it formed. And that’s where things get complicated.

Let’s start with what to call it. The Eastern Arctic Seas Encyclopedia and other reference guides define Bunge Land as “an island and a sandbank.” Geologists who study it, however, call it a land bridge or intermediate zone and, increasingly, define Kotelny as a single island that includes both Bunge Land and Faddeyevsky.

For most of the 20th century, scientists—when they thought about the remote desert at all—thought Bunge Land was a block of sandy seafloor somehow shoved up and exposed. At first glance, that seems plausible. On a satellite image of Bunge Land and its neighbors, in addition to the contrast of its pale sands, something else stands out: The dividing lines between Bunge and the land on either side of it are fairly sharp, a clue that they are faults, carved by past seismic activity.

“You can already see from the geomorphology of the three parts of the whole Kotelny Island that there are very straight borders between them. This always shows a strong, large-scale tectonic shaping,” says geologist Lutz Schirrmeister, senior researcher at the Alfred Wegener Institute in Bremerhaven, Germany. In 2010, Schirrmeister coauthored the most comprehensive paper to date on Bunge Land, in the journal Quaternary Science Reviews.

In fact, the entire New Siberian archipelago falls within the active Arctic Rift Zone, where the Eurasian and North American tectonic plates are slowly and unevenly pulling apart deep below the surface, rumpling and stretching and tearing whatever is above them. Schirrmeister’s research, however, shows that at least large areas of Bunge Land were not raised from the seafloor. These areas are terrestrial in origin, and “part of the East Siberian (continental) shelf.”

During the Last Glacial Maximum (LGM), or the height of the last ice age more than 15,000 years ago, Schirrmeister says, “the global sea level was about 120 meters [roughly 400 feet] lower, because quite a lot of water was bound in the ice caps, [and] these areas belonged to the mainland.” As the ice caps melted, the region, which was not entirely covered in ice, gradually flooded, with the present coastline established about 5,000 years ago, he says.

While ongoing tectonic activity has certainly played a role in the shape of these landforms, the loss of the ice sheets also had a hand. The immense weight of miles-high ice during the LGM actually depressed Earth’s surface. As the ice melted, that intense pressure dissipated and the surface essentially bounced back—very slowly, over millennia—in a process known as isostatic rebound. In some more accessible areas of the Northern Hemisphere that were once crushed by ice sheets, particularly in Alaska and Canada, scientists have found that the rebound process continues today. It’s possible the New Siberians are also still rebounding, but research in this area has been limited.

In the 21st century, Schirrmeister’s team and others have confirmed areas of thermokarst, a type of landscape unique to permafrost regions, buried beneath the sands that dominate Bunge Land’s expanse. Thermokarst regions are flat and pockmarked with small depressions, formed over time as permafrost melts and freezes again—and they don’t form on seabed.

Instead of Bunge Land being sandy seafloor pushed upward by tectonic activity, it appears to have been a permafrost landscape that, because it sits at a lower elevation, was buried under layer after layer of sand, which arrived courtesy of the area’s extreme winds and intense storms. The sand didn’t simply wash away because it was hemmed in by the higher ground on either side. There are additional hints that the permafrost itself also may have slumped during a melt event, been inundated by seawater, and then was lifted again by the restless planet’s tectonic to and fro. The exact order of events, and the timing, remains a mystery.

Evgeny Gusev, deputy director general of geological mapping at VNIIOkeangeologiya, a marine geology research institute based in St. Petersburg, believes in a recent and tectonic origin for Bunge Land. “There was a general tectonic rise of the entire archipelago,” says Gusev. “This happened, apparently, in the middle Holocene, 3,000 to 5,000 years ago.”

Other geologists remain skeptical. “No tectonic activity is responsible,” says Kuzmichev, who thinks isostatic rebound alone explains the rise of Bunge Land and surrounding parts of the continental shelf following the most recent ice age.

Kuzmichev and some other geologists, including Prokopiev, believe the faults that separate Bunge Land from its immediate neighbors date back more than 2.6 million years, possibly much earlier, and are not related to Bunge Land’s recent (geologically speaking) appearance.

However Bunge Land formed, it’s very possible that humans witnessed it. During the last ice age, when sea levels were lower, the entire region was part of a massive plain that spanned continents and included the land bridge of Beringia, which ancient Siberians crossed into what’s now North America. And, while no artifacts have been found on Bunge Land itself, archaeologists have uncovered extensive evidence of an ancient human presence on Zhokhov Island, about 200 miles to the northeast. What humans in the area may have thought of this anomalous, sandy expanse, however—along with the exact events that created it—remains unknown.

Podcast: Two of Our Favorite Mummies

This microscopic treasure was collected from a remote site near the Arctic Circle.
maps

The recent discovery of the world's northernmost "island" recalls the groundbreaking work of the international Polarfahrt team more than 90 years ago.
science

A researcher says her award-winning image of a swirling school of fish is also a metaphor for the oceans' health.
Video • PinDrop