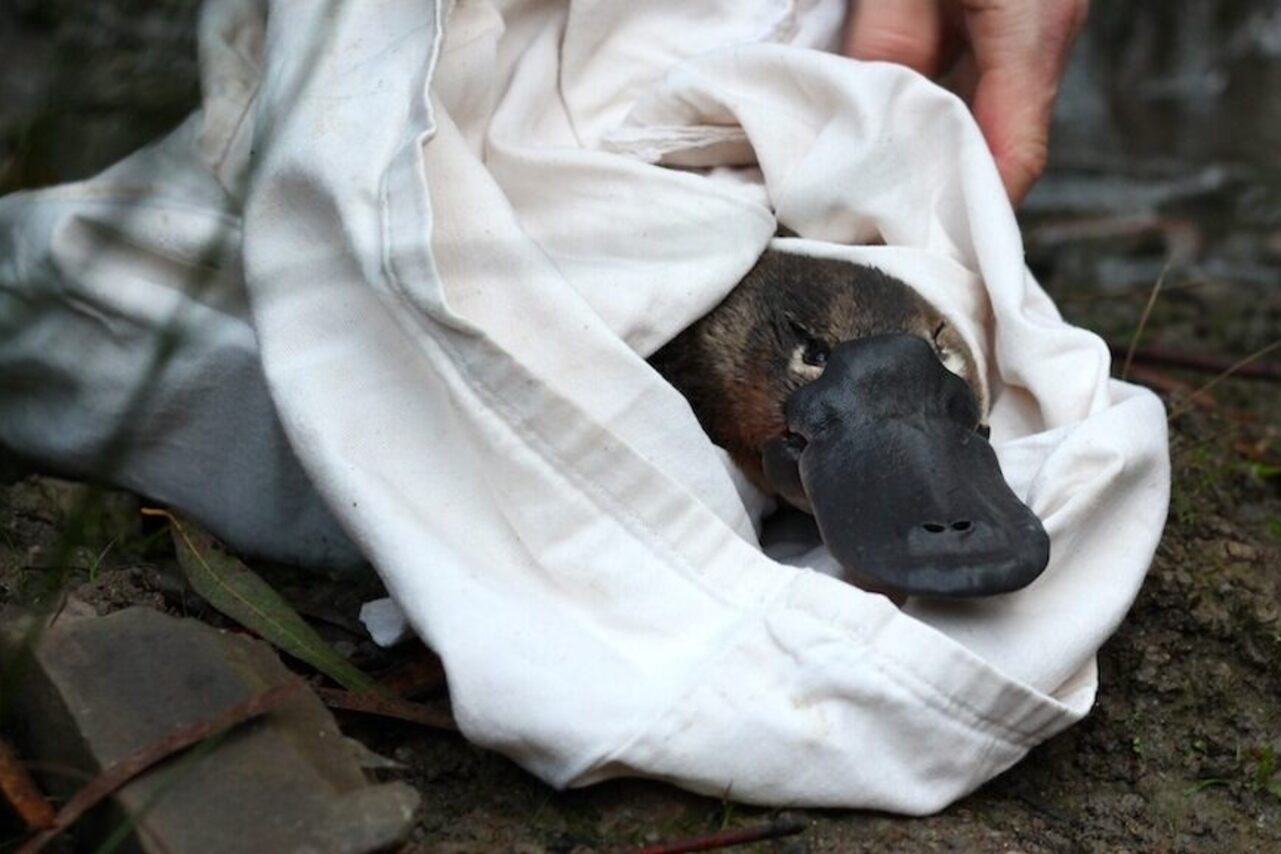 The platypus—furry-sausage body, duck bill, beaver tail, venomous heel spurs—lives what might be considered a cryptid’s lifestyle. The semiaquatic, egg-laying mammals are notoriously hard to spot, skulking around in Australian streams at night. They’re predictably hard to catch, and escape easily from the conservationists trying to track them, including Josh Griffiths, an ecologist with Cesar Australia, an environmental consulting firm, who has studied the creatures for 12 years. On a typical survey night near Melbourne, which lasts anywhere from 14 to 16 hours, Griffiths might catch two or three of the strange, slippery creatures.

The recent Australian bushfires, which have burnt tens of millions of acres* and killed approximately a billion animals, have spotlighted the plights of certain species, from koalas to the lesser-known Kangaroo Island dunnart (a mouse-size marsupial). But there has been little news about how the platypus has been faring, in part because their status is still largely a mystery to science. After all, they’re incredibly hard to spot even when there aren’t raging bushfires. “The short answer is that we simply don’t know,” Griffiths says. “The scale of the fire we’ve got at the moment is unprecedented.” All the sites he usually monitors for platypuses have been declared emergency zones and are inaccessible. “It’s one more nail in their coffin,” he adds.

In 2008, after bushfires and floods swept through Victoria, the Australian Platypus Conservancy conducted a survey of the creatures, according to Geoff Williams, a conservancy biologist. At the time, they found little relationship between platypus populations and local bushfires. Temperatures above 86 degrees Fahrenheit can be lethal to platypuses, so they retreat to underground burrows when things get too hot. These may have provided a critical refuge—one that more terrestrial or arboreal animals such as koalas often desperately need—according to Tom Grant, a biologist who has spent nearly 50 years studying the platypus. (Grant wrote the definitive book on them, and Griffiths calls him “the Godfather of platypuses.”) And in times of drought, platypuses move into the refuge pools that persist in many dried-out streams. These strategy are how platypuses have survived for as long as a million years, Williams says.

But those studies focused on smaller, localized fires. “These most recent catastrophic fires present a different situation, where the vegetation consolidating the banks, in which they dig their resting and nesting burrows, has been devastated,” Grant writes in an email. He predicts that when rain does finally fall in these areas, the banks will erode, degrading water quality and stifling the small, bottom-dwelling invertebrates that platypuses depend on.

To make matters worse, January and February are the time of year when, baby platypuses tend to emerge from their mothers’ burrows, Grant says. “They will be attempting to find their own food in streams devastated by the fires and in many cases reduced to disconnected refuge pools by the current severe drought,” he says. He predicts many of these platypus young will die this season.

The 2008 study also examined stable rivers and streams that still held a substantial water after the fire had passed. But the country’s extreme, ongoing drought has taken a toll on refuge pools, Grant says. And according to Griffiths, the small creeks that once connected habitats have gotten vaporized by the current bushfires, further fragmenting platypus habitat and maybe putting distant remnant pools off-limits. Travel over land to get to these places would expose them to predators, and lingering heat, even at night, could prove fatal. It is, perhaps, a perfect storm, and Griffiths, Grant, and Williams all see the possibility that local populations may go extinct.

In some places, conservationists air-dropped food, such as carrots, to help some stricken wallabies, but that’s not an option for the more finicky platypus. “We can’t do food drops because they only eat live prey,” Griffiths says, including waterbugs and yabbies, a type of freshwater crayfish. “And we have to be careful when spreading live organisms around.” Williams says he’s heard of some prior attempts to feed vulnerable platypuses live earthworms and yabbies, but that there was never any evidence that the food was actually eaten. Plus, this solution is simply not scalable in a crisis like this, he says.

Another option could be to capture and care for some platypuses, but that’s also proven tricky. “You can’t just put in cave traps, you have to use highly specialized nets that can only be used in shallow waterways,” Griffiths says. And the species consumes at least 15 percent of its body weight per day in live prey, making it a huge drain on resources for any zoo or facility, most of which are already stressed to their limits, according to a statement from the Australia Platypus Conservancy. Relocation is also a bad option, since any surviving rivers likely also hold surviving platypuses and other species, competing for the same meager habitat and resources, Williams says. The only thing that might make this possible, as it did following a 1983 bushfire, would be to move surviving populations into places where others had died out. It’s a long-term plan, though, and biologists still have limited access to the survey sites they’ve been studying.

When the state of emergency passes, Griffiths says, he will return to his monitoring project, a collaboration with the San Diego Zoo called the Great Australian Platypus Search. The project relies on environmental DNA, or eDNA, the genetic traces platypuses leave behind. But the bushfires might have thrown a wrench into this project, too. When Griffiths surveyed a site near Melbourne after Australia’s 2009 Black Saturday Fires, he found charred soil; the fire had burnt off the eDNA. And any samples he finds now might be from platypuses that did not survive all the environmental stress.

Though the bushfires are a serious, recurrent problem, the real menace to platypuses is likely to remain the drought. Since European colonization of Australia, the species has lost nearly half its historic population across the eastern part of the mainland and Tasmania, according to Gilad Bino, a researcher at the University of New South Wales Centre for Ecosystem Science. “There’s been a change in what we call the shifting baseline, a change in our collective memory,” he says. “When we see two platypuses in a pool, we think that’s a lot of platypuses, but it’s a fraction of what it used to be.” Bino published a paper modeling the platypus’s future decline, and potential extinction, in the February issue of Biological Conservation. His research identifies a toxic soup of factors beyond fires that threaten the strange mammals’ future, including prolonged drought, climate change, land clearing, and the construction of dams that break up habitat.

The platypus is such an iconic species that it’s almost surprising its decline has happened without much fanfare. European scientists first encountered the platypus in 1791, but argued over its anatomy for nearly a century, according to a 2019 paper in the Journal of Mammalogy. Aboriginal people, who called the platypus mallangong, tambreet, gaya-dari, boonaburra, and lare-relar, among other names, had developed a deep ecological understanding of the creatures, though European scientists characteristically ignored this knowledge, suspecting the specimens they saw were some kind of elaborate hoax.

Bino hopes his paper will lead to a national risk assessment of the future of the species. “There’s a desperate need for more information, and for government funds to monitor platypuses,” he says. “Not knowing what’s going on is not an excuse to assume everything is fine.” And if you are in Australia on a midnight stroll and happen upon a platypus, consider marking it in platypusSpot, a citizen science project Griffiths helps run.

Meanwhile, researchers continue to toil away for long nights in pursuit of the elusive animals. “The more data we’re getting points to that they should be at least listed as vulnerable, or endangered,” Griffiths says. “At least then, people would have to pay attention to them.”

* Correction: An earlier version of this story stated that the recent bushfires have burnt two million acres. They have burnt tens of millions of acres.

Notre Dame's famed instrument is being dismantled and restored following the 2019 fire.
farms

The Lost Art of Growing Blueberries With Fire

Using all four elements to grow the perfect berry.
forests

The demise of Arabica's birthplace would be a catastrophe for the industry.
botanical gardens

10:22
Want to see fewer ads? Become a Member.
From Around the Web
Related

An Ancient Australian Volcano Is a Haven for Giant Pink Slugs

Just because they're huge and garish doesn't mean they're easy to find.
Read more
Thanks for sharing!