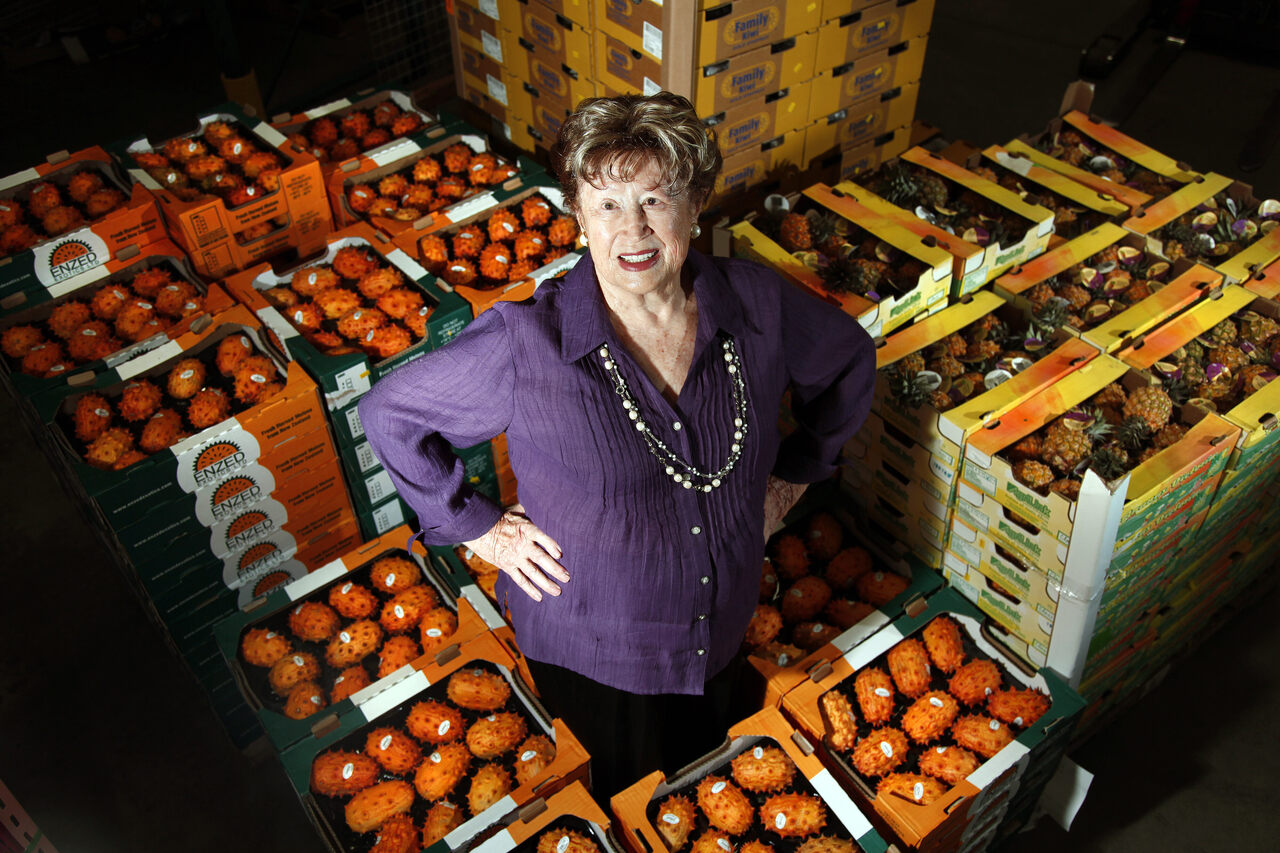 The spiky, fruit cup-flavored orb made an appearance on “Star Trek.”

Most Americans have never heard of Dr. Frieda Rapoport Caplan. But any American who has enjoyed a kiwi, mango, or blood orange has tasted her legacy.

A veritable pioneer in the world of produce passed away on Saturday at the age of 96. As the founder of Frieda’s Specialty Produce, Caplan revolutionized American cuisine and supermarkets by ushering guavas, passionfruit, shallots, endives, kumquats, Asian pears, radicchio, and kiwi, among many others, into a broader culinary lexicon. She transformed a male-dominated industry at a time when few women were business owners at all.

But she always insisted she was just in the right place at the right time.

In 1955, Caplan was a UCLA political science graduate with a budding legal career. With the birth of her first daughter, however, she forewent a rigorous work-life in favor of more flexible employment. Luckily, her husband’s (a man later known as Mr. Frieda) aunt and uncle needed a bookkeeper for their downtown produce house. Her ability to steer customers toward the day’s more obscure produce—brown mushrooms—did not go unnoticed. In short order, she graduated from bookkeeper to the first female sales associate in L.A.’s Wholesale Produce Market.

After successfully marketing a haul of unheard-of “mangoes,” her path became clear: With a small loan from her father, she launched her own produce house in 1962. Her first charge was the “Chinese Gooseberry,” a small, fuzzy fruit from New Zealand. As she recounted to CBS in 2019, she noticed that the fruit bore a striking resemblance to the country’s national emblem, and suggested they rebrand it “kiwifruit.” The producers pivoted to “kiwi,” and Caplan encouraged local restaurants to put kiwi tarts on their menus. Slowly but surely, the fruit took off. “I like to call it our 18-year overnight success,” she told the LA Times.

Caplan’s reputation as an exotic-produce trailblazer was sealed, and she was just getting started. According to Darrell Corti, the globetrotting gourmand behind Sacramento’s iconic Corti Brothers Grocery, who helped spark California’s Food Revolution in the 1970s, the American produce scene before Caplan was “peas and potatoes.” “I had a reputation of trying anything new,” Caplan told the Pasadena Star-News in 2003. “I couldn’t compete with all the boys on the big items … so I built the business selling things that were different.” She introduced endives, kumquat, chayote squash, shiitake mushrooms, and tamarind. “She made the unknown known, the undiscovered discovered,” writes Corti in an email. When customers couldn’t tell sunchokes and ginger apart, she affixed her products with instructional labels and recipes. “Ripe When Wrinkled,” read the sticker on each passionfruit.

By marketing far-flung items like lemongrass, galangal, habanero peppers, enoki mushrooms, lychee, and turmeric, Caplan made the unfamiliar accessible to the American public. She afforded Americans the luxury of travel without leaving their kitchen. Corti adds radicchio and hot house cucumbers to the list. “And who knew about elephant garlic?” he adds. Today, Frieda’s Specialty Produce is credited with the introduction of more than 200 items to American produce aisles.

It wasn’t just business savvy that distinguished Caplan. In a 2015 bio-documentary called Fear No Fruit, she claims to have slept four hours a night for 30 years, starting her days at 1 a.m. to beat wholesale clients to the market and staying until the smallest buyers left at 5 p.m. She did so six days a week while raising two daughters, who now head the company. Until recently, Caplan still came to work to file invoices by hand and research the next big product. “At least it’s just Monday to Friday now, no more Saturdays,” she said in the film at age 90.

If she wasn’t always the last person in the room, Caplan was often the only woman in the room: She stands as the first woman in the U.S. to open her own produce house. She recalled a trade convention in San Antonio to the LA Times. The trade group’s president greeted the room by saying “Good morning gentlemen—and Frieda.” “She was a ballsy lady,” recalls Corti, “her brand and name carried weight.” Caplan never let her gender limit her success. “People looked at her and said, ‘Wow what a great role model for women,’” said Dick Spezzano, former VP of produce at Vons Supermarkets, in Fear No Fruit. “That’s not true, she was a great role model for women and men.”

For a ripe, decades-long career, she was bestowed an array of awards. The LA Times listed her among Steve Jobs and Jane Fonda in a 1990 roundup of Californians who reshaped American business throughout the 1980s. She won a Lifetime Achievement Award from United Fresh Produce, an honorary doctorate from Cal Poly, and a Legacy Award from the National Association of Women Business Owners, to name a few. She refused to accept the Packer Newspaper’s “Produce Man of the Year,” however, until they agreed to change the name.

While she introduced American audiences to hundreds of fruits and vegetables, there are still tens of thousands of undiscovered edible crops left in the world today. Her mission of bringing the unfamiliar to American doorsteps may never be completed, but she did put a good dent in it.

Restoring the grounds and its rare, heirloom crops recreated what was effectively the country's first seed bank.
collections

The Chef Who Carves Traditional Patterns Into Fruits and Vegetables

His chant and truck were symbols of the Crescent City.
Video • PinDrop

A bronze sculpture of a monkey sits outside this factory, which has made an anise-flavored liqueur for over 150 years.
Want to see fewer ads? Become a Member.
From Around the Web
Related

These 7 Companies Ship Unique Seeds for Your Quarantine Garden

Beat the rush by turning to small, local suppliers—and your neighbors.
Read more
Thanks for sharing!