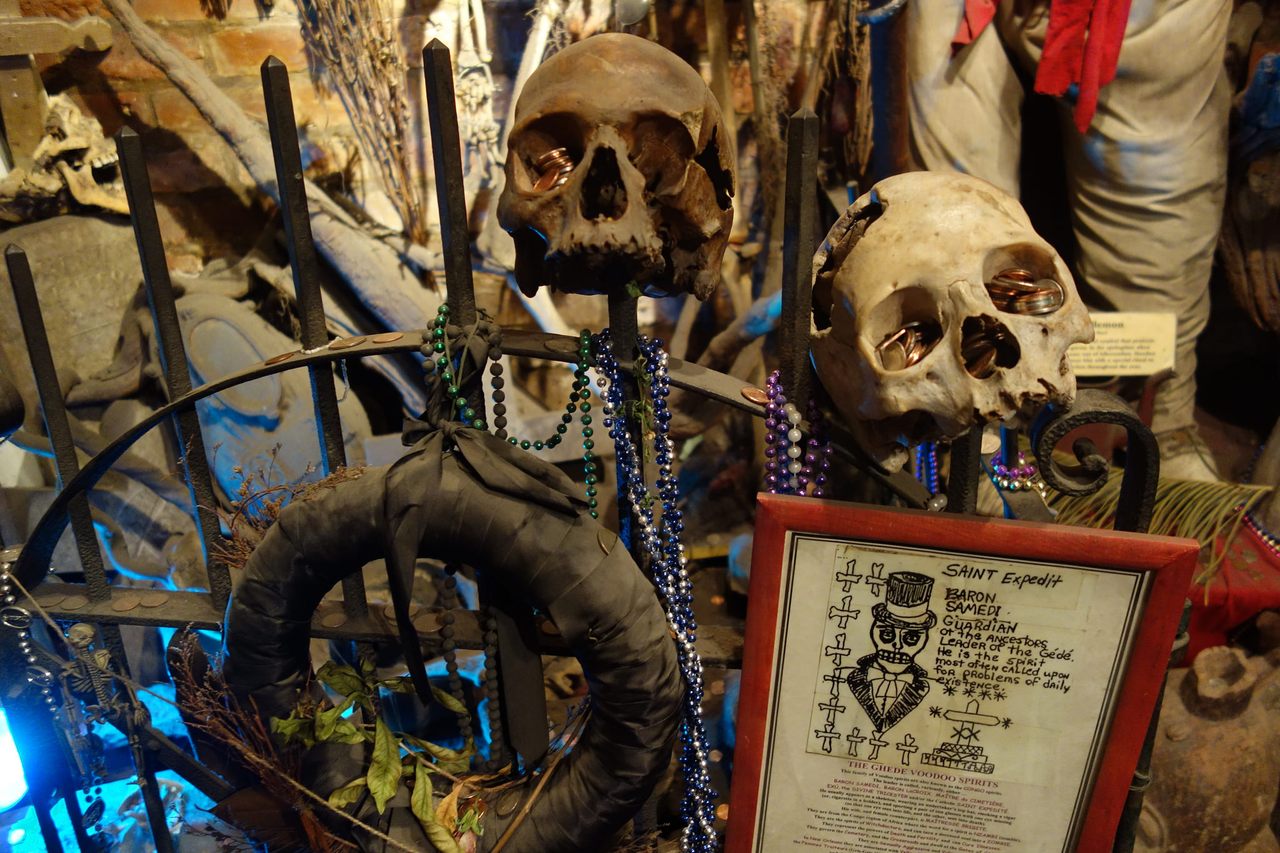 A museum and shop on Bourbon Street located in the former home of the second Voodoo Queen of New Orleans.
Place

Tucked away in a small German apartment is an eclectic museum devoted to West African vodun culture.

You probably know of voodoo dolls, the witch doctor Facilier in Disney’s The Princess and the Frog, perhaps the controversially named Voodoo Donuts. But beneath this cultural runoff, Voodoo is a complex, albeit dark… religion? Culture? Maybe both.

Voodoo combined pieces of Roman Catholicism (the religion foisted upon colonized nations by Italy, Spain, and Portugal) with traditional local belief systems, including, in some cases, witchcraft. Traits of Catholic saints and ideas from syncretic religions are mixed together in the form of loas, who act as intermediaries between the human world and the Supreme Creator.

Physical charms, herbs, amulets or “gris-gris” in American Voodoo, could be imbued with spiritual power to protect oneself or harm one’s enemies. It focuses heavily on death because that’s what it was born out of—the brutality of colonialism and the slave trade. Much academic discussion has drawn parallels, in particular, between stories of zombies and people cursed to toil mindlessly under a master for all eternity.

Though Americans might be most familiar with Louisiana Voodoo, other variations of the religion include West African Voudon, Dominican or Cuban Vodú, Haitian Voudou, or any other local denomination depending on what part of the African Diaspora it originated from. These all traveled with slaves taken from West Africa to the Caribbean, South America, and the southern United States, branching into their distinct sects.

Louisiana Voodoo, in particular, became an business of superstitious sideshow performances, exploiting the tourist industry that came to gawk at exotic rituals. But some of it is real—that is, some of it is a treasured cultural tradition of great import to its practitioners. These places are no exception. Some of them are essentially mall kiosks with plastic skulls and beads, there for the entertainment of tourists, while others are seriously sacred sites. Others are both.

You can see Voodoo’s intersection of Catholicism and local beliefs quite literally at this mysterious monument in Haiti, where Voodoo originated. There is little consensus on the monument’s origin story, but most people believe this Catholic cross was erected by missionaries sometime around the early 19th century to claim the hill for God. And anywhere between a week and a century later the cross was struck by lightning and locals came to believe this to the gods reclaiming the hill for themselves and their people. It’s been a Voodoo pilgrimage site for prayer and sacrifice ever since.

The Akodessewa Fetish Market, or “Marche des Feticheurs,” is a kind of super supply where you can find anything from leopard heads and human skulls to Voudon priests who bless fetishes, predict the future, and make medicines to heal whatever ails you. Voudon, which begat Voodoo, is one of the most popular religions in the area, which is obvious given the outdoor market’s location is right in the heart of the capital. Here you can find talismans and charms good for treating everything from the flu or infertility to removing the blackest of curses.

These waterfalls became a holy place after it was widely believed that the Virgin Mary had appeared nearby on a palm tree. For over a century, Haitians have trekked from miles around on the feast day of Our Lady of Carmel to ask the Virgin Mary (or the closely associated Vodou loa, Erzulie Dantor) for her blessings.

The palm tree was chopped down by a French priest who was rightly concerned that the cultural significance of the tree would foster superstition, but the action was futile, and the area itself became sacred despite his efforts.  The sick and the needy let the water of the falls wash over them as they perform various rituals of both Voodoo and Catholicism in a three-day-long religious festival.

Marie Laveau was born in the French Quarter of New Orleans around 1801, the illegitimate daughter of a Creole mother and a white father. She was a hairdresser by trade but was better known as the most powerful of the city’s Voodoo practitioners. She sold charms and pouches of gris gris, told fortunes and gave advice to New Orleans residents of every social strata. Some said Laveau even had the power to save condemned prisoners from execution. An 1874 ritual Laveau performed on the shore of Lake Pontchartrain drew a crowd of over 12,000 people.

Laveau died in 1881, and is said to be buried in St. Louis Cemetery No. 1, in the tomb of her husband’s family, the Glapions. Amateur occultists, Voodoo practitioners, French Quarter tourists flock here in equal measure. They scribble Xs on the whitewashed mausoleum in hopes Laveau will grant their wishes.

Marie Laveau’s daughter (confusingly also named Marie Laveau) learned Voodoo and Voudon from her mother, and their stories are often conflated together. History is unclear on who exactly did what, but it is known that both of the powerful women gained quite a following among 19th century New Orleans’ uniquely multi-racial, multi-religious community.

It was in this house that Marie Laveau II lived out the last of her days with her family. Now it is a museum and tourist attraction. Visitors can leave offerings at an altar, and spiritual items and books from around the world for sale. In a back room spiritual readings, spells and Tarot card readings are held. The Voodoo Queen’s ghost is said to appear back there from time to time.

The Soul of Africa Museum is not, in fact, in Africa. It’s in a small apartment in Essen, Germany, belonging to one Henning Christoph, a photographer, ethnographer, and collector. He has worked with and studied voodoo among different tribes for a long time and has documented these practices extensively. The rooms are packed with figurines from different groups. There include an altar to Mami Whata, a water spirit, where you can bring sacrifices for the goddess, as well as elaborate costumes used in ancestral worship rites. In addition to the extensive collection of religious artifacts, there is a good portion of the site that is devoted to the Atlantic slave trade, displaying rare historical artifacts including a brutal pair of iron shackles.

For just about anything that ails you, there’s a solution in the Sonora Market, the largest esoteric market in Mexico and a must-see for those interested in mysticism. Local vendors have an answer to any of life’s daily troubles in the form of a magic soap, holywater spray, or a ritual pamphlets.

It’s not just Voodoo sold at Mercado de Sonora; there are a number of other vernacular religions represented there, such as the cult of la Santa Muerte and Brujeria. A number of these beliefs are practiced by people alongside their Catholic faith, or even mixed into it.

Claiming to be the “largest Occult, Spiritual, New Age and Religious supplier worldwide,” Saydel wears its unique interests on its sleeve. Immediately upon entering the surprisingly utilitarian store, customers are greeted by a life-size statue of Papa Legba, the Orisha deity recognized by both Voodoo and Santeria as the go-between twixt gods and humans. Reflecting the diverse backgrounds of their customer base from the Caribbean, Mexico, and further afield, the shop carries a blend of African, Meso-American, and Roman Catholic items such as candles, oils, and effigies. However, despite the rare and esoteric beliefs represented in the shop, the shelves have the look of a tidy suburban pharmacy with rows of identical loa statues lined up next to tight formations of pre-fab prayer candles.

If Voodoo can be tied to the history of any one city, it’s New Orleans. Founded in 1972 by Charles Massicot Gandolfo, a local artist with a passion for all things Voodoo, the small museum has been inducting its visitors into the mystical melting pot of African, Creole, and American Southern culture that created New Orleans Voodoo since it opened in the 1970s. Among the more unusual services that the Historic Voodoo Museum offers are psychic readings. Prognosticating, or fortune telling, is an art that is deeply ingrained within the fabric of Voodoo culture.

The work is for the 90th anniversary in 2021, but the real party is still a decade away.
sacred spaces

The Professional Mourners of Mani, Greece

The peninsula is home to a tradition of ritual lament that dates back to ancient times.
ancient

Watch a Celebration of the Cult of 'Saint Death'

"The skinny lady," a skeleton in fancy dress, is an unconventional usher into the afterlife.
Video

1:04
Want to see fewer ads? Become a Member.
From Around the Web
THE GASTRO OBSCURA BOOK
Taste the World!
An eye-opening journey through the history, culture, and places of the culinary world. Order Now