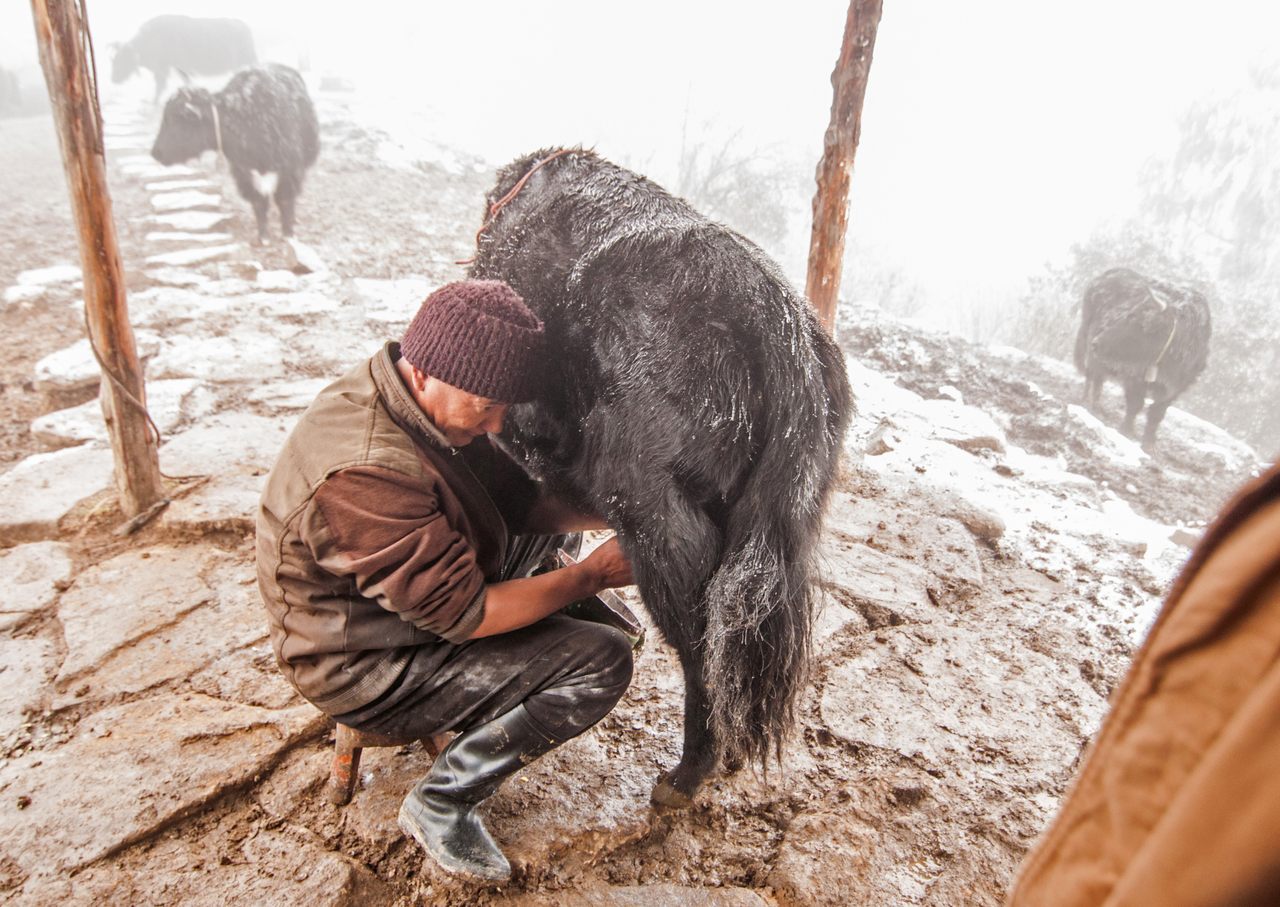 It is a sub-zero January morning in Tawang, where travelers are braving freezing winds and rain for the annual Torgya Festival, a monastic event at the 340-year-old Tawang Monastery. But I am buoyed by thoughts of visiting the Brokpas, the semi-nomadic yak herders of the Eastern Himalayas.

In Arunachal Pradesh (in Northeastern India) as well as neighboring Eastern Bhutan, the Brokpas spend summers trekking through high mountains in search of grazing pastures. (A similar community in Western Bhutan, the Bjops, does the same). The yaks provide milk, wool, and meat, but the Brokpas are best known for making yak cheese, which is a major component of local cuisine.

Historical accounts on the Brokpas are rare. In the book Assam Adventure, British botanist and adventurer F Kingdon Ward describes hiking to Tibet through these regions in the early 1900s and passing industrious yak herders. The Brokpa lifestyle has changed very little since then, but modern infrastructure and climate change are beginning to make this trade unsustainable, and their yak cheese increasingly rare.

The Brokpa settlement is a cluster of austere huts a 30-minute drive outside of Tawang. Its spartan nature reflects its status: used for only three to four months a year until the weather warms and the herders head for mountain pastures.

A guide, Sange Tsering, introduces me and a small group of travelers to Sange Norbu, who’s busy milking one of his yaks. He chants as he works, but pauses, smiles, and directs us into his hut. The inside is dim, lit by a fireplace where a pot is boiling. On a hammock above the fire, I see a big lump of cheese. The fire dries and hardens the cheese, I learn, while adding a smoky flavor in demand at the market.

Making cheese from yak milk takes extensive time and work. As we talk, Norbu’s wife churns butter in a wooden sopu or zopu. “This has to be done for hours to get butter out of the milk,” she says. “We’ll first collect the butter and then boil the milk until the chhurpi [cheese] is formed.”

Families like Norbu’s may eat or sell ​​chhurpi fresh. More often they let it ferment for a few days or make chhurpupu, a more expensive product that’s preserved for several years in pouches made of yak skin. Valued for its medicinal properties, it’s believed to treat body aches when consumed in small quantities mixed with local alcoholic drinks.

As we talk, the Norbus are cooking vegetables with chhurpi on the fireplace. In the local cuisine of the Monpas (the dominant ethno-linguistic group in the region), cooks use the cheese with vegetables, meat, and noodles. Most kitchens contain a fiery condiment called “chamin” made of yak cheese with lots of chili. Similarly, in nearby Bhutan, the national dish of ema datshi is essentially chillies (ema) cooked in yak cheese (datshi).

Despite the popularity of yak cheese, the Brokpa way of life faces existential threats.

The first hurdle is geopolitical: India and China’s uneasy relationship. Recent tensions between the two, including skirmishes over their disputed border, have closed down ancient trade routes to Tibet and denied the herders access to higher pastures, where the wild yaks of the vast Tibetan wilderness used to play a major role in the breeding process. Nowadays, herders like the Norbus have to rely on inbreeding to maintain their stocks.

“Most of our herds consist of a lot of dzos [hybrid of yaks and domestic cattle],” says Norbu.

Older generations of Brokpas also say that the weather is changing. Winters are shorter, and glacial lake outburst floods (GLOFs) and landslides more common. “It starts heating up as early as February now,” says Norbu as he serves salty butter tea. “Snowfall has reduced too.” High-altitude meadows and glacial lakes are drying up, making it difficult to find new pastures.

As yak herding has gotten harder, India’s economic growth has also made leaving more desirable, and many sons and daughters choose life in towns and cities for better opportunities.

Not everything is bleak though. “Maintaining a herd is not easy,” says Norbu. “Thankfully, we also got help in breeding at the Centre, and the new calves are healthier.”

The “Centre” is the National Research Centre on Yak (NRCY), a government-funded research organization whose breeding program addresses the problem of inbreeding, with livestock experts selecting the strongest farm bulls to maintain hardiness. They also have a facility full of frozen bull semen to be used for artificial insemination and assist herders with deworming and vaccinating their yaks.

Some of the NRCY’s assistance, though, pushes against the pastoral lifestyle. The organization has developed feed blocks for the yaks using corn stover and finger millet straw, offered credit and funding for yak herders to modernize their cheesemaking, and discussed the introduction of sedentarization (rearing yaks in one place to provide stability).

In comparison, neighboring Bhutan is helping herders and encouraging them to maintain their traditional pastoralism. The recently formed Yak Federation organizes quality assurance and standardization. “Recently, training on making french cheese out of yak milk has been tried in Bhutan,” says Dr. Kuenga Namgay of Bhutan’s Department of Livestock. Namgay hopes this will boost herders’ incomes, while other programs supply equipment for wool processing and supply feed blocks during extreme winters.

In Tawang, the Norbus are committed to their herds but unsure about future generations.

“My elder son is also into this trade, [but] my younger son is studying at a boarding school and will look for a job when he grows up,” says Norbu. “We have received some help from the government in breeding and maintaining the yaks, but this life is difficult.” With mixed emotions, we finish our tea and thank the Norbus for their hospitality.

Their cows and buffaloes graze in Himalayan meadows.
mountains

In this remote Swiss town, residents spent a lifetime aging a wheel for their own funeral.
mountains

Bovine researchers believe the world needs the only cow adapted to the largest tropical wetlands.
Video

Once where royalty entertained guests, this opulent table is now one of the longest in the world.
Want to see fewer ads? Become a Member.
From Around the Web
Atlas Obscura Trips
Delhi and Rajasthan: Colors of India
View This Trip
Thanks for sharing!