How Serbian Immigrants Made an Ohio Town the ‘Fried Chicken Capital of the World' - Gastro Obscura
Want to see fewer ads? Become a Member. 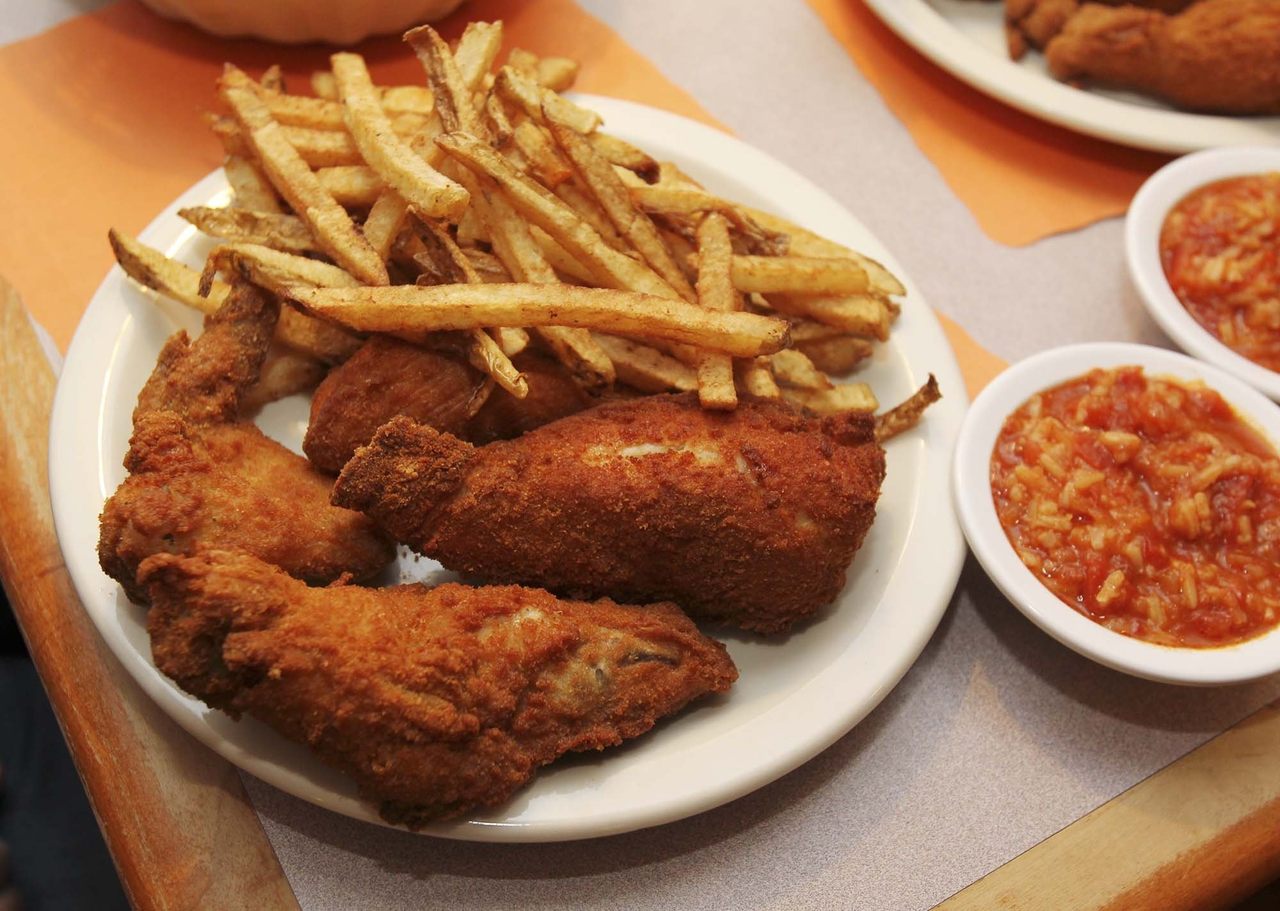 You can only try pohovana piletina in two places. One is Vojvodina, Serbia, where the unique style of fried chicken was born. The other is Ohio, where “Barberton-style fried chicken,” as it’s known there, became one town’s claim to fame. What started as a comforting meal for an immigrant family came to define a community, turning a humble Ohio town into the “Fried Chicken Capital of the World.”

Smiljka and Manojlo Topalsky weren’t the only Eastern Europeans to leave home for a burgeoning Ohio farm-town called Barberton in the early 1900s. Their grandson, Milos Papich, points out that one of the oldest Serbian social clubs in the country is there, just south of Akron.* The emigrated family owned a successful 300-acre dairy farm for decades.

During the Great Depression, though, the Topalskys lost everything but the farmhouse. Luckily, Smiljka could still cook.

On July 4th, 1933, the Topalskys opened an eatery out of that farmhouse. They called it Belgrade Gardens, and sold soups, chillis, and sandwiches to their struggling neighbors. “But it wasn’t enough to raise a family,” Papich says over the phone. One day, the story goes, Smiljka was in the back cooking a classic Serbian chicken dish for her family that she’d learned from her mother. After it caught the nose of one outspoken bank-teller, says Papich, he demanded they sell it to their regulars—a mishmash of recently immigrated Eastern Europeans who longed for a taste of home.

Once they had a taste, they couldn’t get enough. The chicken became an overnight hit among town denizens, and love of Smiljka’s fried chicken wove itself into the fabric of the community. “It kind of fell into their lap,” says Papich. “My grandparents never would have dreamed that the food they grew up with would be so well-received.”

Within seven years of putting Serbian fried chicken on their farmhouse menu, the Topalskys were able to buy back 65 acres of land from the bank, says Papich, current owner of 87-year-old Belgrade Gardens. The restaurant stayed with the family as much as pohovana piletina stays with Barberton. And to the purists in this still chicken-smitten town, Smiljka’s original dish is all but scripture.

Before explaining how to make it, Scott Marble makes one thing clear. “You need to keep it what it is,” says the owner of famed fried-chicken vendor Village Inn Chicken. “There is a recipe.” To make the dish, you break down a fresh, young, 2 ½- to 2 ¾-pound chicken and brine it in salt. Frozen chickens will not do, and it’s not to be seasoned beyond salt. Importantly, you must use the whole chicken. “We sell a lot of chicken backs, but we call them ‘chicken ribs,’” says Papich. “There’s not a whole lot of meat on them, but the meat that’s on those backs is sweet.” After an egg wash and a breading, you let it sit overnight. Finally, you fry the chicken low and slow in pork lard for 20 minutes—just as Smiljka did.

This “porcine baptism,” writes John T. Edge, author of Fried Chicken: An American Story, leaves the chicken “sheathed in a crisp but slightly chewy mantle.” Papich says the frying method leaves the poultry with soft, porky notes. As made standard by Belgrade Gardens, restaurants plate the customer’s selected cuts of chicken with coleslaw, french fries, and a “hot sauce” born of Serbian djuvuce. The meal has survived in Barberton for nearly 100 years without venturing much beyond it.

Throughout the 1900s, Smiljka’s comfort food reshaped the town to which it emigrated. Over time, Serbian-owned chicken joints, often female-led, propagated across the Barbertonian landscape. Helen DeVore was a long-time employee at Belgrade Gardens before she opened Hopocan Gardens in 1946; Mary Marinkovich opened Whitehouse Chicken in 1950; the Milich family opened Milich Village in 1955. They all sold, essentially, Belgrade Gardens’s legendary chicken dish as quickly as they could be eaten.

And they could be eaten quickly. Throughout the 1960s, Ron Koltnow, author of Barberton Fried Chicken: An Ohio Original, claims Barbertonians ate 30,000 chicken meals, or some seven tons of chicken every week. On Mother’s Day 1969 alone, he claims, the town ate 25,000 chicken meals. So fervorous was the fowl-frenzy that Koltnow’s Ukrainian Jewish grandparents allegedly broke kosher to partake in the hyper-local food fad. During a decade that Koltnow termed “the golden age of chicken” in an interview with Cleveland Magazine, Barberton declared itself the “Fried Chicken Capital of the World,” a moniker yet unchallenged.

For his part, Edge, who quite literally wrote the book on fried chicken, proposes the town has earned at least the title “Fried Chicken Capital of America.”

Throughout, Belgrade Gardens has remained a noble torchbearer of this old-world custom, while becoming a local landmark and casually winning awards into the present day. Papich is honored to carry the legacy of an institution that’s served several generations of Ohioans, adding that the current mayor once worked there as a busboy. Belgrade Gardens has air-mailed fried chicken all over, from Alaska to Florida, to those celebrating birthdays or anniversaries, or battling homesickness. During wartime, chicken was shipped to Barberton residents posted in Vietnam. Papich says it’s even been, by explicit request, several folks’ last meals.

While the remaining chicken houses of Barberton all pay homage to the same seminal meal, minor variations in sourcing, breading, and frying earned each chicken house its own character. Each Barberton family, in turn, has their own preferred house, while neighborly owners engage in mild rivalries.

“Everyone has their favorites. We think we’re the best, they think they’re the best,” says Papich. In fact, Belgrade Gardens’s fried chicken went head-to-head with Whitehouse’s in a 2010 episode of Food Network’s “Food Feuds.” “We won, but there’s no reason to be argumentative,” says Papich.

While slight differences and friendly competition have emerged between the houses, they all face the same looming threat.

“We’re all shells of what we used to be,” says Marble. He recalls people lining up around the corner with a police officer directing traffic out front. “We’re far from that anymore. New blood doesn’t want home cooking.” He cites the recent proliferation of fast-food establishments across town as unhelpful competition; they certainly make 20-minute fried chicken feel like slow food.

“Families just don’t sit down for dinner anymore,” says Papich, who notes that his take-out business, if nothing else, is expanding. When asked if he’d compromise his Barberton fried chicken dish to, say, cut down on wait time or cost, he wastes no time answering. “I’d rather close on a high note than water things down. My parents would agree. My grandparents would agree.”

*Correction: An earlier version of this article stated that Barberton was an hour south of Akron. In fact, Barberton is only a 20-minute drive from Akron.

The Belgrade Book Collection That Survived War, Fascism, and Neglect

Known for their food, the city's Chaldean diaspora wants to revive their restaurant scene.
festivals

A large immigrant community has made their cuisine popular.
food

Specialties that are disappearing back home still thrive in "New Iceland."
Video

The headquarters of a pioneering cast iron and cast aluminum cookware company is in ruins, but still standing.
Toledo, Ohio

This spectacular public market has got meat, fish, vegetables, baked goods, and enough kielbasa for a lifetime.
Cincinnati, Ohio

The inventor of the iconic Pringles can was so proud of his invention he was buried in one.
Want to see fewer ads? Become a Member.
From Around the Web
THE GASTRO OBSCURA BOOK
Taste the World!
An eye-opening journey through the history, culture, and places of the culinary world. Order Now