This Historic Boozy, Fruity Preserve Is a Celebration of Summer - Gastro Obscura
Want to see fewer ads? Become a Member. 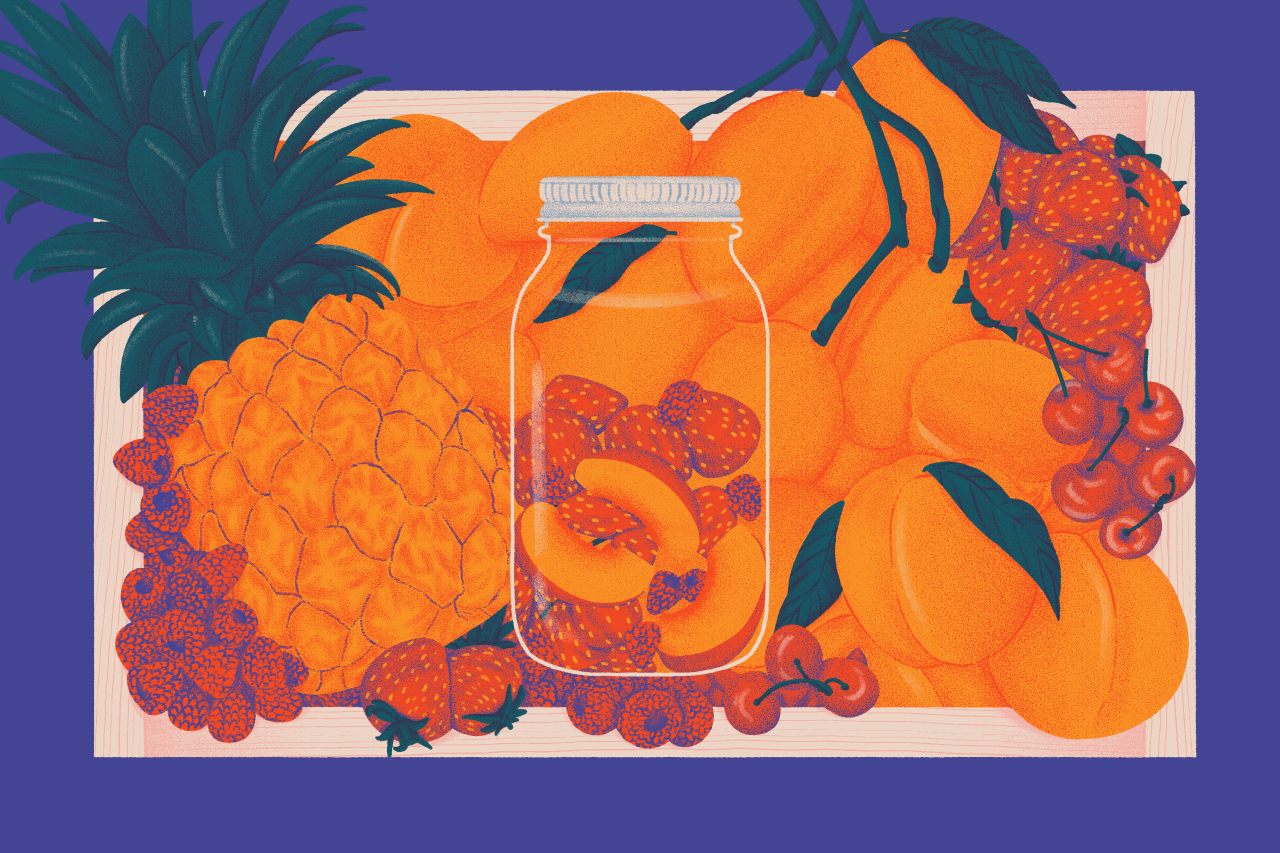 Tutti frutti jars provide an ever-changing lineup of flavors and colors. All illustrations: Cha Pornea for Gastro Obscura
In This Story
Destination Guide

A 1908 cookbook declared the ingredient “a rich filling for tarts and pies.” In 1909, the Boston Globe claimed that it was “fine in frozen pudding” or could be served with meat during the winter. And in 1916, a Delaware paper promised that “a cup of it … stirred into a steamed pudding or in a jam cake, gives a rare flavor.”

That magic ingredient that could punch up just about any dish? A shape-shifting, boozy compote known as tutti frutti. Beginning in the 1800s, the term tutti frutti (Italian for “all fruits”) was used in the United States to refer to anything with a mixed-fruit flavor, including candy, soda, gum, and ice cream. But the term also referred to a decadent brandied-fruit mixture that was popular in the U.S. from the 1880s up until the start of Prohibition.

Although tutti frutti relied on a simple formula—fruit, sugar, and brandy—variations abounded. Homemakers would begin to prepare their jars each May, when strawberries were coming into season, and add to them throughout the summer months as more fruits became available. The flavor varied depending on which fruits were used, how much of each, and how long the mixture had been stewing.

Tutti frutti recipes were popular at a time when preserving foods during the summer was necessary for a family to maintain a nutritious diet throughout the winter. “This is a way of using up every single bit of food that you have,” says food historian Joyce White. Vegetables were pickled, fish were smoked, meats were corned, milk was turned into butter and cheese, and fruits were preserved into rich, sugary jams, jellies, and conserves.

Amy Bentley, a food studies professor at New York University, adds that using diverse methods of preserving could also add flavor and excitement to an otherwise generally bland American diet during this era. “It’s a lot of bread. It’s a lot of meat. It’s a lot of root vegetables,” she says. “And so you want accent flavors to spice that up.”

By the mid-1800s, industrially preserved goods were available to wealthier Americans in big cities. But for many, especially in rural areas, it was necessary and often preferred to make your own. “You’re at this time period where you’ve got the ability if you have the money and the access to buy canned fruit. Yet you still have this proliferation of recipes for making it on your own,” says White, “so there’s definitely that push and pull between the old ways and the new ways.”

When it came to tutti frutti, the resulting compote was meant to last throughout the winter and was used to top ice cream, fill pies, flavor puddings and cakes, and act as a condiment for meats. Tutti frutti was a flexible recipe: Add fruits when you have them, take a little when you need it, and so on. Jars could last for years (some recipes even said indefinitely).

But by the mid-1910s, tutti frutti’s popularity appeared to be waning. A 1915 article calls it a “preserve of our grandmother’s day.” When Prohibition came along in 1920, the preserve became an illegal pursuit, and although it was possibly still made in secret, recipes for the boozy treat disappeared from the official record. A 1923 recipe for tutti frutti gives directions for cooking the fruit like a jam rather than stewing it in alcohol.

In the 1970s, brandied mixed-fruit jars saw a revival, but this time, there was a communal aspect to the recipe. The jars, which fermented on countertops across the country, were often referred to as “friendship fruit” or “friendship cups” because those making it would give small portions of the liquid from their brandied fruit jars to friends who would then use it as “starters” for their own jars. “At the end of five weeks, you should have two or three cupsful to give to friends so they can start theirs,” directs a 1971 recipe.

Tutti frutti jars are part of a long, rich history. “Storing fruits in alcohol goes back as far as people have been making alcohol,” says Danille Christensen, a professor at Virginia Tech who is writing a book on the American history of home canning and preserving. But part of the beauty of tutti frutti is that you can make it your own. You can add whatever fruits most appeal to you, or whatever you have on hand, at the proportions you desire.

While the recipe requires patience, the time commitment is an homage to the pleasures of seasonality, as fresh fruits are added one by one. “It is celebrating these shifts through time,” Christensen says. “And along the way you get a distinctive product that could really exist at no other time than its own.”

This below recipe for tutti frutti is a modern-day take on the classic. Since a wide range of fruit is now available throughout the summer season, you can begin your tutti frutti jar at any time using a mixture of fruits instead of beginning with a single fruit and adding one at a time.

This can be done in a dishwasher with a heat setting of at least 150°F, or by submerging the jar in boiling water for at least 10 minutes.

Wash and thoroughly dry the fruit. Chop and slice the fruit so the pieces are all relatively the same size. Half inch pieces work well but you can adjust to slightly larger or smaller based on how chunky you want your tutti frutti. Make sure any stone fruits and cherries are pitted. Smaller berries should be left whole. Fruits with thick skins like peaches should be peeled.

4. Feed and care for the tutti frutti.

For the first two weeks, stir the mixture daily with a clean wooden spoon to disperse the sugar (which settles to the bottom) and after that, stir once a week. Add fruits as often as you like with an equal amount of sugar, making sure to stir well to incorporate. No more brandy is needed. The tutti frutti can be enjoyed after the first week of stewing and then as often as you like.

The Indigenous Origins of the Maine Lobster Bake

How resourceful home bakers managed to make dessert from practically nothing.
food

From “pie for a doubting husband” to “spaghetti a la suffragette,” these recipes came with a side of activism.
death

The French deconstructionist had a weakness for baked goods.
Want to see fewer ads? Become a Member.
From Around the Web
THE GASTRO OBSCURA BOOK
Taste the World!
An eye-opening journey through the history, culture, and places of the culinary world. Order Now