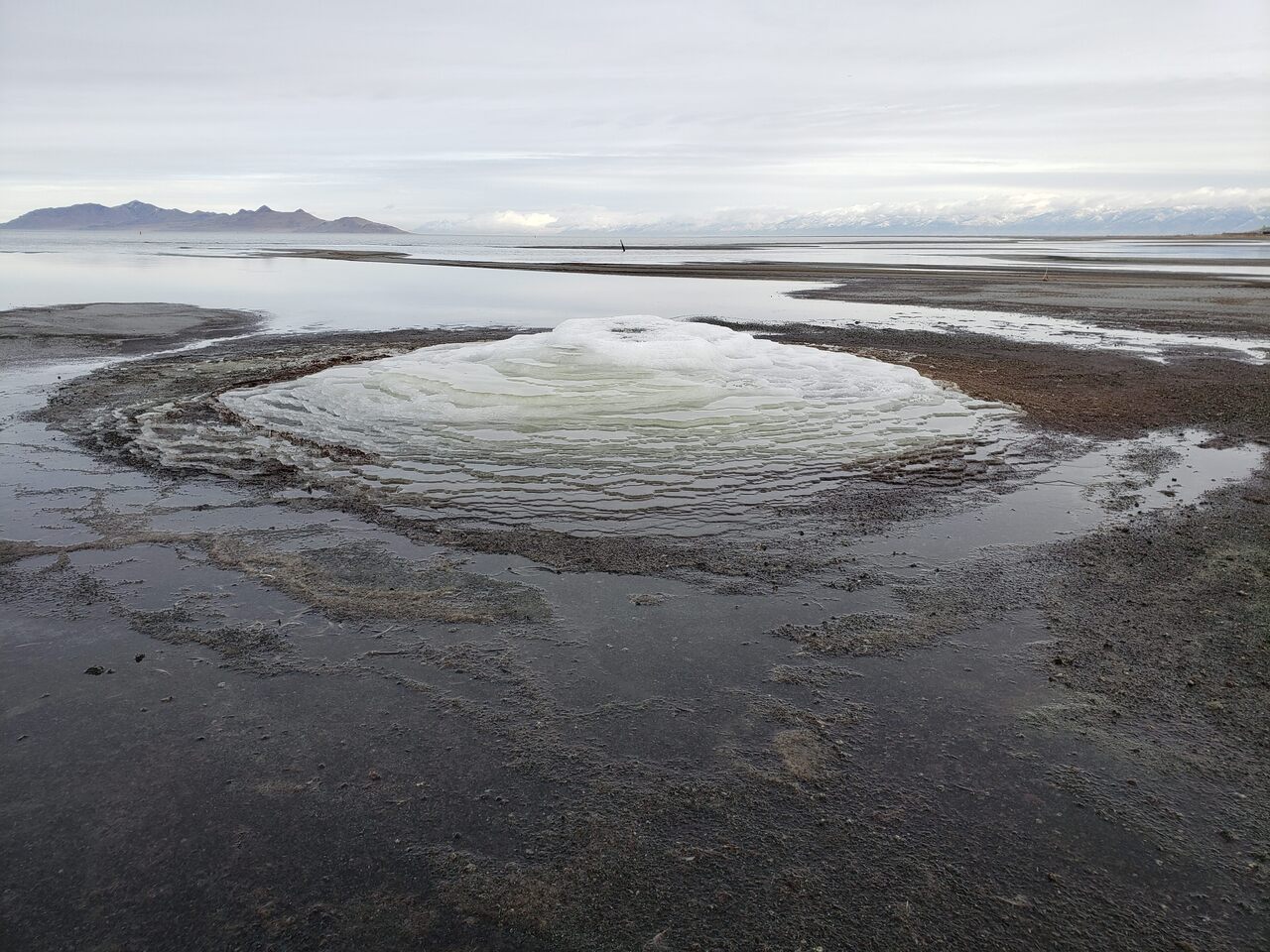 As the mirabilite accumulates, it forms crystallized terraces on the lakefront. Courtesy Utah Geological Survey
In This Story
Destination Guide

Though it can appear static on its surface, Utah’s Great Salt Lake is anything but. The lake’s contents are less plain water than primordial soup of minerals: fundamental building blocks like calcium, magnesium, sulfate, and—perhaps obviously—sodium and chloride, which account for all the saltiness. But while the ingredients for some life are there, the lake’s particular biochemical recipe makes matters difficult for its most familiar forms.

Last October, however, a veritable laboratory for life emerged from the lake’s depths, in the shape of salty, sulfate crystals. The mineral’s name is mirabilite, or Sal mirabilis—“wonderful salt”—and it may provide clues about how life could exist on Mars.

“Mirabilite precipitates in the lake water, and it sort of gets washed ashore,” says Mark Milligan, a geologist with the Utah Geological Survey. “You [usually] get these windrows of mirabilite. It can look … like a slushie or something.”

The lake, a vast expanse of salinated water with a sprinkling of mercury and other minerals, is bisected by a railroad causeway that has created two distinct chemistries—one on the north side of the water, another on the south. Mirabilite forms on the saltier north side, where it ordinarily flows out of underwater springs and dissolves into the water.

But last October the north side’s surface level was lower than usual, which allowed the mirabilite to lap up above the surface and crystallize, forming four terraces of the mineral—each up to three feet high and dozens of feet across—along the shore. As the mirabilite rises from the springs and crystallizes, it slowly cuts off the sulfate-rich font below.

“They tend to seal themselves off,” Milligan says of the underwater springs. “They seem to precipitate mirabilite that seals their plumbing.” But every time enough of the mineral obstructs the underwater seeps, another spring spews forth more mirabilite.

While mirabilite occurs in many places that are wet, cold, and salty—it was mined by Native Americans in Mammoth Cave and other parts of the Smoky Mountains, and formed last year on China’s Yuncheng Salt Lake—its terrace structure in Utah is unique, and makes it look like the Great Salt Lake is having a bad acne outbreak.

Because this was the first time the mirabilite manifested above the surface, it offered researchers a great opportunity to investigate the mineral.

The mounds of mirabilite are made possible by a perfect storm of sulphate-heavy springs, cold weather, and water. Once upon a time, all these conditions were present on Mars. And at least in the Great Salt Lake’s mirabilite, life has found a way, according to recent surveys by Elliot Jagniecki, a geochemist with the Utah Geological Survey.

Jagniecki’s inspections of the dissolving pools of mirabilite turned up green cyanobacteria and other bacterial strains—extremophiles that thrive in hostile environments. Jagniecki theorizes that these microorganisms could help oxidize the sodium sulphate that makes up the inhospitable springs, paving a way for more life.

In any case, the microscopic life forms and the tough circumstances they face in Utah’s Salt Lake makes the water body another analog for alien environments—a position also held by the natural laboratories of Chile’s Atacama Desert and the lava fields of Iceland.

“If there [are] sulphates on Mars, and there’s groundwater, what’s … fascinating and intriguing is the possibility that it could preserve life” says Jagniecki. “Things are entombed in the crystal … A tomb of bacteria.”

Jagniecki plans to check in on the mirabilite seeps in the summer, when the cold weather that formed the bizarre structures is long gone, but the springs will still be producing the sulphate-rich mineral underwater. He hopes that seeing them in a different environment may clue his team in on how the small signs of life manage to exist in a water body that’s chemically repugnant, and reeks of sulfur.

“I’ve a feeling they’re going to be different from what we identified in the lake,” he says. “They’re extremophiles. The conditions [right now] are just right for them to thrive.”

The 20,000-square-foot house requires endless renovations, but the ceiling is high enough to fly a drone inside.
marssaltlakesnatural wonders

Help us keep them coming by directly supporting Atlas Obscura.
Become a Member
$5/month $10/month $20/month
See All Membership Options
Already a part of our membership program? Sign in.
No Thanks
Keep Exploring
lakes

It's probably about five times as briny as the Dead Sea.
astronomy

You can thank the moon's gravitational pull for these nine extraordinary sights.
space exploration

8 Alien Landscapes Where You Can Visit Mars on Earth

The closest to Mars you can get without leaving the planet.
science

A bunch of toxic mercury is suddenly missing from the bottom.
Video • PinDrop

Yuncheng Lake is one of the country's oldest salt-production sites.
Read more