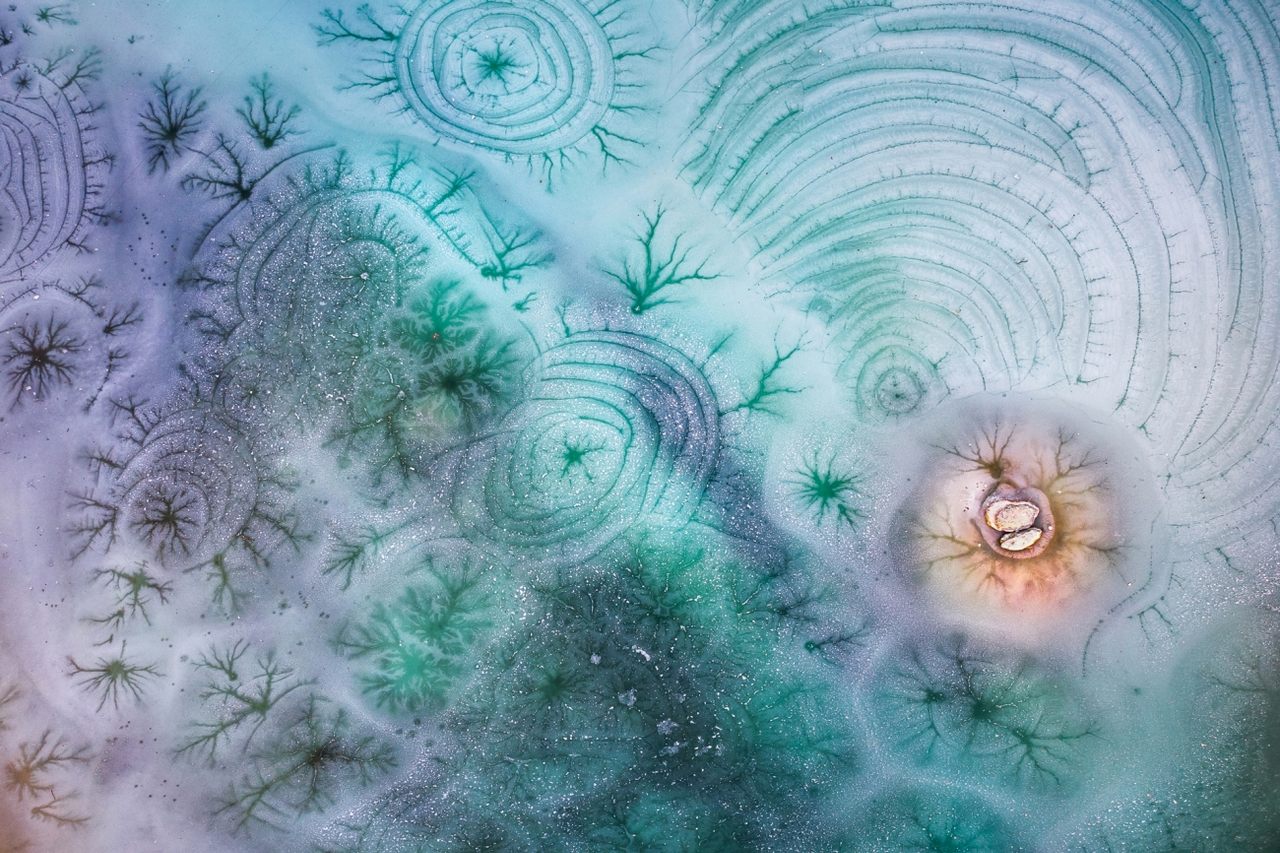 With ice as the medium, wind, water, and falling objects create art on a frozen lake in Slovenia. Aleš Komovec/Courtesy Siena Drone Photo Awards 2022
In This Story
Destination Guide

In summer, tiny Lake Šobec, not much larger than an Olympic swimming pool, is a playground. It’s the main attraction at a popular camping site just outside Bled in mountainous northern Slovenia. Šobec’s shallow waters feature areas for swimming and kayaking, plus a modest water park. Ducks and swans share the shore with humans, while a variety of small fish tickle the toes of anyone splashing past them.

When winter descends on the Alpine landscape, however, the small lake becomes a canvas.

Amateur photographer Aleš Komovec used a drone to capture this overhead view of a portion of the lake transformed into a magical scene of tree-like branching patterns, rings, and arches. He called the image Icy Forest, but what he captured actually has more in common with a cracked windshield.

Dozens of lake stars, their distinctive, fractal arms stretching out as if to touch each other, formed across Lake Šobec’s surface. While not fully understood by scientists, lake stars are fairly common and occur anywhere in the world where conditions are just right: a thin layer of lake ice under a couple inches of wet snow, plus air temperatures above freezing.

A pebble, fallen branch, or other object punches through the thin ice to the water below. What happens next is essentially the same as a small rock hitting your windshield just right: The initial break sets off a chain reaction of cracks that fan out around it in long, irregular lines as they follow minute weak spots in the hard material.

Lake stars can form because water beneath that thin layer of almost-clear ice is a degree or two warmer than the ice itself. When an object breaks through the ice, the warm water wells up through the hole and then finds its way outward along the surface. The water moves through air pockets in the wet snow cover, melting it and revealing the thin ice beneath it in branching patterns. Eventually, the hole that started the lake star formation might freeze over again, leaving a dark, snowflake-like pattern on the snow-covered ice.

The combination of fragile, thin ice topped by heavy, wet snow can lead to other striking surface patterns. Wind can subtly push the ice cover this way and that, causing it to bump into shorelines or exposed surface rocks and crack. Warmer water from below rushes through the crack, melting the overlaying snow before freezing again, creating thin ring and arch patterns of alternating snow and exposed black ice.

And sometimes, the object that creates a lake star crashes through the ice with enough force that it disturbs a wider area, leaving behind not just the star itself but concentric rings around it, also seen in the image. You’ll find a similar pattern, sometimes called a bull’s-eye or pressure ring, in windshields damaged with the right amount of force.

The colors present in Komovec’s image are a combination of shadow from surrounding trees, the pale lakebed just beneath the surface in places, and Lake Šobec’s naturally green, clear water—a common feature in the limestone-dominant landscape of Slovenia’s Julian Alps.

Komovec’s Icy Forest was named a Commended image in the 2022 Drone Photo Awards.

Yuncheng Lake is one of the country's oldest salt-production sites.
science

Often associated with Earth’s hottest places, these whirling columns show up on all seven continents—and beyond.
geology

Iron-rich springs generate intense color in a stark landscape that, from above, might be mistaken for a crime scene.
Video • PinDrop

3:07
Want to see fewer ads? Become a Member.
From Around the Web
Atlas Obscura Trips
Forest to Table in Alpine Slovenia
View This Trip
Thanks for sharing!