The Monumental Undertaking of Moving Into an Old Masonic Temple - Atlas Obscura
Want to see fewer ads? Become a Member. 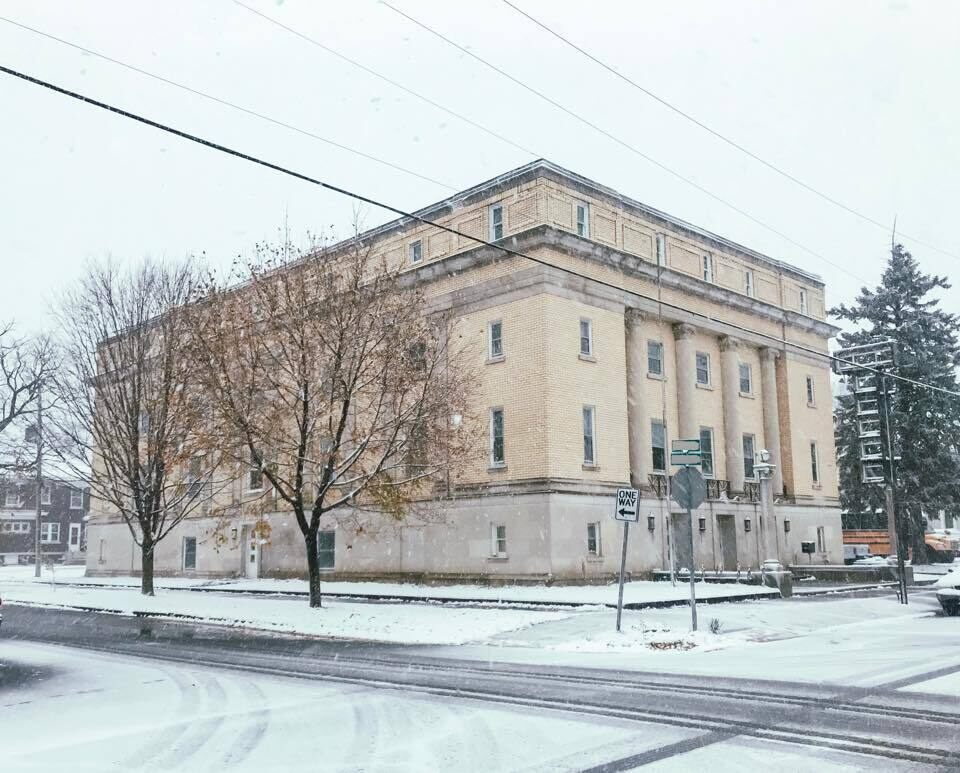 An iconic emblem greets visitors to Theresa Cannizzaro’s home: a brass ‘G,’ flanked by a square and compasses, that is inlaid into the floor. The previous tenants, who were Freemasons, left it behind. Cannizzaro lives with her husband, Atom, and their three children in an old Masonic temple.

The temple in Huntington, Indiana, wasn’t the house the couple had in mind when they decided to move east from San Diego, where they’d grown up and started their family. Atom was into aquaponic gardening, a pursuit that can take up a lot of land, and land costs a lot less in the Midwest. But a few years ago, while visiting family, they happened across the sprawling, stately building and noticed that it was on the market.

As it turned out, the Freemasons had decamped for a smaller, one-story building, Cannizzaro says, partly because it was getting hard for aging members to climb to the third-floor meeting space. (Several old Masonic temples have fallen into disrepair across the country, as membership has sunk; in many cases, the structures prove difficult to reuse.) The couple waffled a little, but the building had good bones; the roof had been redone recently, and the heating and cooling systems were fairly new. On a sticky August day, Cannizzaro noticed it was blessedly cool inside, even without any air conditioning cranked on. The temple was theirs for $89,000.

After closing on the building in the fall of 2016, the family had to figure out how to turn a 20,000-square-foot space, built in 1926, into a home for a family of five. Renovations kicked off in spring 2017, starting with a bathroom—there were six restrooms in the building, but no showers. Then came a new kitchen: There’s a big, commercial cooking space in the basement, Cannizzaro says, but hauling food up and down the stairs “got old really fast.” The family built a smaller kitchen up on the second floor, the part of the house they use as their living space. They also winterized 71 windows. They keep the thermostat around 65 or 63 degrees, and a little lower at night. “We tell people to wear a sweatshirt when they come over,” Cannizzaro says. Last winter, the highest monthly heating bill was $350.

Though the Freemasons have moved on, traces of the fraternal organization are everywhere. That ‘G’ symbol, which is typically associated with geometry, or a Great (or Grand) Architect of the Universe, appears on 65 doorknobs, many glass doors, and the carpet in the sprawling, third-floor space that was once used for large gatherings. The Freemasons left behind some furniture, too, including a long, black-walnut banquet table—a little too fancy for everyday family use, Cannizzaro says, but great for Thanksgiving with friends.

Cannizzaro has a plan for some of the nooks in the vast structure: She intends to renovate a portion of the third floor, which she says once stored ceremonial garb, and list it on Airbnb; the basement could become a rental space for events. Other portions, such as the massive third-floor meeting room, which has a mezzanine and an organ, will be in limbo for a little longer. “We literally have no idea what we’re going to do with it,” Cannizzaro says. There’s some water damage and busted plaster that need repairs, but for now, the family has rigged up a projector, and likes to watch movies or play Mario Kart on the soaring wall. With 25- or 30-foot ceilings, she adds, it’s also a fun place to fly a drone. A big open space on the fourth floor could eventually become a personal music studio, “but that’s far in the future,” Cannizzaro says. “It’s not on the top of any priority list.”

So far, the family has sunk between $30,000 and $40,000 into the home makeover project. “We take our renovations really slow because we’re doing it debt-free,” Cannizzaro says. She figures they’ll be tinkering with the temple for the foreseeable future. They’re hoping to build a rooftop garden in the next couple of years, once they’ve installed railings. “We are the tallest building in almost the whole town,” Cannizzaro says. “When I get up on the roof, I can see forever.”

Glowing Dutch Greenhouses, As Seen From Way Up High

Jobie Hill has visited 700 former residences. Many have been abandoned. Some have become storage space. Others are B&Bs.
Video • PinDrop

1:26
Want to see fewer ads? Become a Member.
From Around the Web
Travel With Atlas Obscura
Are you a curious traveler?
Join local experts in 50+ destinations for a once-in-a-lifetime journey.
View Our Trips
Thanks for sharing!