Will the Gates of Hell Be Closed Forever? - Atlas Obscura
Want to see fewer ads? Become a Member. 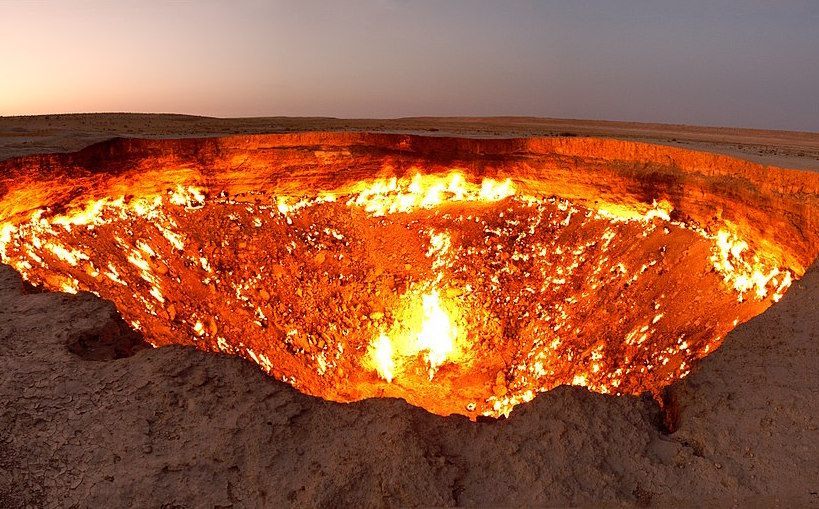 Turkmenistan's firey pit, the Gate of Hell, may be extinguished after burning for decades. Tormod Sandtorv/CC BY-SA 2.0
In This Story
Place

The Gates of Hell

A fiery crater has been burning in the Karakum Desert since 1971.
Destination Guide

It’s best to go to hell at night. Drive three and a half hours north of Turkmenistan’s eerily quiet, marble-clad capital, Ashgabat, deeper and deeper into the flat, seemingly empty desert. In the middle of nowhere, surrounded only by sand, turn onto a dirt road. Then, you’ll see it. Bright orange flames rise out of an infernal abyss, licking the night sky. The air at the pit’s edge is thick and hot, like standing too close to an erupting volcano. It smells faintly of propane, and it’s loud, like a jet engine revving up. Welcome to the Gates of Hell—at least, until its devilish blaze is snuffed out.

On January 8, Turkmenistan’s President Gurbanguly Berdymukhamedov announced plans to extinguish the decades-old conflagration in the chasm, also known as the Darvaza gas crater. He cited safety concerns for those living nearby as well as economic loss as valuable methane gas burns off into the atmosphere, reports Agence France-Presse. Though he didn’t specify how he would put out the immense fire—perhaps by filling in the crater or diverting the gas elsewhere.

The president’s announcement made international news, but people have been trying to put out the crater’s fires since they first ignited—whenever that was. No one even knows exactly how or when the crater formed. That mystery is part of what makes the crater so interesting, says explorer George Kourounis, the first man to descend to the bottom of the flaming crater in November 2013. The most widely circulated story about the crater says it formed in 1971 following an accident. The Soviets were drilling deep in the Karakum Desert for natural gas, still Turkmenistan’s main export today, when the heavy drilling rig collapsed into the earth. Hoping to burn off the methane gas that floated up from the newly formed crater, the Soviets lit it on fire. They thought it would burn off the methane in a day or two. Five decades later, the crater’s still burning.

But local geologists told Kourounis a different story. “They told me rather that the crater actually formed in the late 1960s and wasn’t lit on fire until the 1980s.”

It’s rumored the Soviets tried to stop the blaze, perhaps several times. Berdymukhamedov also announced plans in 2010 to extinguish the flames. But the fiery hellscape has continued to burn, drawing more and more tourists each year. The crater’s growing popularity is largely thanks to the internet and viral photos of the unearthly phenomenon. Berdymukhamedov even used the hellish backdrop to dramatic effect following rumors of his death in 2019. To prove he was in fact alive, Berdymukhamedov released a video of himself doing donuts in front of the flaming crater.

From rapping about his beloved horse to lifting a gold barbell in front of his clapping cabinet, Berdymukhamedov is a dictator known for his eccentricities. His peculiarities are one of the few things we know about Turkmenistan, considered the second most isolated country in the world, after North Korea. When it comes to the closing of the crater, Gianluca Pardelli, the founder of Soviet Tours and consultant on Atlas Obscura’s Turkmenistan trip, isn’t convinced that Berdymukhamedov is acting out of concern for his fellow Turkmens. “There is no one nearby,” he says. Berdymukhamedov ordered the closest town to the crater to be razed to the ground. He didn’t like the impoverished looks of it, says Pardelli.

It’s undeniable though that the crater is leaking valuable and environmentally harmful methane into the atmosphere. The crater is “a polluting environment,” says Stefan Green, director of the Genomics and Microbiome Core Facility at Rush University in Chicago. He accompanied Kourounis on the 2013 expedition to look for life inside the crater. (They did find simple organisms, like methane oxidizers, thermophiles, and spore-forming bacteria, living amongst the flames. But Green says he wouldn’t lose any sleep over the death of these organisms if the crater were filled in.)

But it may be harder to stop the flames than just pouring a bunch of sand into the pit, something Kourounis witnessed firsthand at the bottom of the Gates of Hell. “As I was digging into the ground to gather these soil samples, fire would start coming out of the hole I just freshly dug because it was creating new paths for the gas to come out of the crater. So even if you were to extinguish the fire and cover it up, there’s a chance that the gas could still find its way out to the surface and all it would take is one spark to light it up again.”

There’s also the potential economic value of the crater. If Turkmenistan were able to drill beneath the crater, they could mine the methane gas and sell it as natural gas. No one knows just how much methane could be captured, but the fact that the crater has been burning for decades suggests there’s a vast supply.

From a tourism perspective, closing the crater would be bad news, says Pardelli. The crater is, without a doubt, “the biggest tourist attraction in the country,” he says. Then again, tourists aren’t exactly desperate to get into the extremely isolated country. Less than 10,000 people visit Turkmenistan every year, says Pardelli.

While there are many reasons to close the Gates of Hell, Kourounis for one would be sad to see it go. “It’s an old friend of mine. I want to see it last,” he says. When you visit the crater, “you almost expect Satan himself to come jumping out of the fire with his horns and tail and pitchfork and start doing a dance and challenging you to a violin duel.”

Remnants of the nation’s diverse history are littered throughout the historical region known as Galicia.
islands

All you need is a dream, investors with deep pockets, and concrete. A lot of concrete.
animals

The animals face threats from climate change, fishing, and a tourism boom, but their biggest advocate remains hopeful.
Video • Wonder From Home

4:14
Want to see fewer ads? Become a Member.
From Around the Web
Atlas Obscura Trips
Turkmenistan and the Gates of Hell
View This Trip
Thanks for sharing!