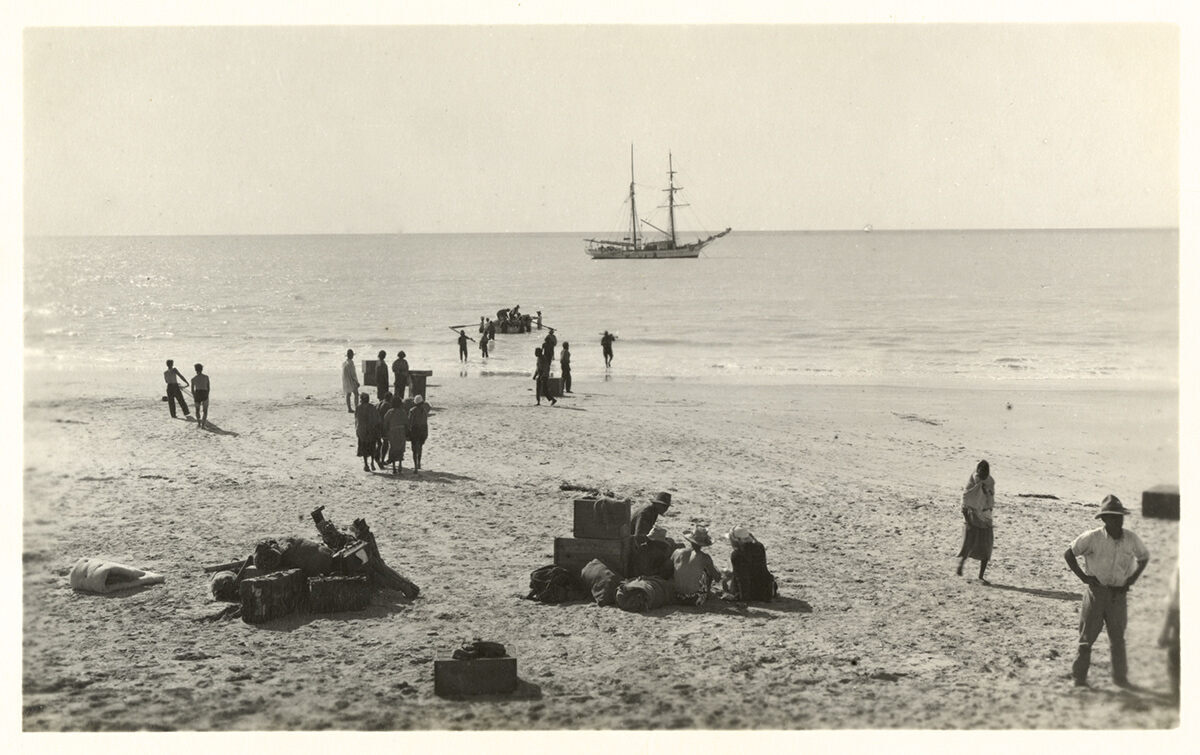 On August 30, 1922, astronomer William Wallace Campbell arrived at Wallal, Western Australia, for the solar eclipse that would happen three weeks later. It had already been quite a journey. In July, Campbell—director of California’s Lick Observatory—had sailed roughly 7,500 miles from San Francisco to Sydney. From there, he crossed Australia by train to reach Perth, then traveled north by ship for 10 days to reach the town of Broome. At this point his expedition party was around 35 people strong: it included his wife, Elizabeth Campbell, and scientists from Australia, India and Canada. From Broome, two boats carrying 35 tons of equipment sailed to Eighty Mile Beach, the final stop before they could reach their destination of Wallal.

The path of the eclipse could not have been further from California. It swept from the east coast of Africa over the Indian Ocean before crossing Australia at Wallal. The options for the expedition were Christmas Island, the Maldives, or other rural locations in Australia. But the weather conditions favored Wallal, as did the fact that it would see the longest totality of all the locations.

Wallal is in a uniquely remote position. To the east is the Great Sandy Desert, an arid landmass larger than the whole of New Zealand. Beyond that lies the Australian outback, a vast area of bush land that stretches across the country. To the west is the Indian Ocean, which brings in cyclones for five months of the year.

Campbell had previously traveled to faraway destinations—Spain, India, Ukraine and Kiribati—to record eclipses. However, getting the right conditions for the 1922 eclipse was crucial. The purpose of this expedition was to test Einstein’s Theory of General Relativity, which had been published in 1915. In order to do this—to see whether Einstein’s prediction that light from distant stars would bend around the sun was correct—Campbell needed perfect conditions to photograph the sun during totality.

It wasn’t the first time Campbell had tried to test one of Einstein’s theories. In the late summer of 1914, as Europe marched toward war, Campbell went to Ukraine for the August eclipse. This trip—an attempt to test Einstein’s 1905 Theory of Special Relativity—was thwarted by bad weather. He was not only unable to get any accurate data, but war was officially declared three weeks before the eclipse. He had to return home and leave his equipment with the Pulkovo Observatory in Russia.

The next attempt was during the eclipse of June 8, 1918—the last one to travel from coast to coast across the continental U.S. until August 21, 2017. Campbell positioned himself in Goldendale, Washington, but once again, he was unlucky. With his instruments still stuck in Russia, he had to use borrowed equipment in cloudy weather. He found the test to be inconclusive.

The following year, a British astronomer named Arthur Stanley Eddington travelled to Principe Island off the west coast of Africa for the eclipse on May 29, 1919. His goal was the same as Campbell’s: to photograph starlight to see if Einstein’s theory was correct. During a totality of 6 minutes and 51 seconds, in changeable conditions, Eddington succeeded in capturing the images he needed. After careful analysis, the Royal Society and the Royal Astronomical Society announced, in November 1919, that there was “no doubt that they confirm Einstein’s prediction. A very definite result has been obtained that light is deflected in accordance with Einstein’s law of gravitation.”

The 1919 eclipse results made Einstein and his theory world famous, even if some of the general public—and journalists reporting on the momentous event—still struggled to understand relativity theory. (A headline from The New York Times in November 29, 1919 read: Can’t Understand Einstein). However, some scientists expressed concern over the accuracy of Eddington’s plates. For some years, even Campbell was bothered by his own 1918 results. In 1921, he wrote “The fact is that we should not have attempted any observations on that subject with the imperfect and untested lenses which we borrowed only one month before the date of the 1918 eclipse.” The British astronomers also wanted a confirmation of Eddington’s measurements. The next total solar eclipse was September 21, 1922. Campbell turned his attention to find the most suitable place to retest Relativity Theory.

It is fortunate that at least one of the 35-odd people in Campbell’s expedition recorded the journey itself. The expedition photographs held at the University of California Santa Cruz’s Lick Observatory collection are an extraordinary archive that shows both the remoteness of the location and the amount of work that went into capturing the eclipse.

The amount of preparation that went into this expedition is astounding,” says Archivist Alix Norton, “all leading up to a few crucial minutes in which they could take photographs of the total eclipse through the telescope.” (The other images in this story are from the State Archives of Western Australia). It’s also interesting, notes Supervisory Archivist Kate Dundon, that “they had the foresight to document their astronomical research, which was focused on photographically capturing the eclipse, with photography.

One of the more striking images shows equipment being ferried to shore. Whaleboats full of precious equipment had to navigate the 26-foot sand bank before being carried across the surf and loaded into donkey wagons. With the help of the local indigenous Nyangumarta people, the expedition gear was then transported to the campsite. Only there, between wattle trees, dusty soil and relentless flies, could the preparations truly begin.

The photographs also show the sheer size of the instruments. Campbell’s party alone had a 40-foot camera, which needed to be housed in a specially constructed tower. There were also two 15-foot cameras, and glass plates measuring 17 inches square and one-quarter-of-an-inch thick. A tent between trees created a makeshift darkroom.

The photo archive also reveals another side to the camp: The mess tent was christened Café Einstein. The group enjoyed a trip to the beach, which Clarence Chant, the Canadian astronomer, documented in his account of the expedition. Another photo shows that, unusually for the era, Elizabeth Campbell was not the only woman present and that she played a significant role in the expedition. She was involved with “many of the day-to-day operations at the eclipse camp and helping operate the spectrograph and develop photographic plates,” says Norton. “Much of what we know about daily life on these expeditions is due to Elizabeth’s detailed diaries and photo scrapbooks,” all of which are also part of the UCSC’s collections.

In perfect conditions, on the afternoon of September 21, 1922, the sky darkened. Months of preparation—and years of attempts—had led Campbell to these 5 minutes and 19 seconds. What he saw that day is now part of the Lick Observatory Collection. One of his eclipse photographs shows the sun’s corona burning around a dark moon; around it, the sky is dotted with circles. These circles “denote the positions of stars around the edge of the sun, which are only visible at this position when an eclipse occurs,” says Norton. It’s one of her favorite images in the collection. “This photo of the total solar eclipse is stunning both from an artistic and scientific point of view—first of all, it’s gorgeous, but more importantly, it confirmed Einstein’s general theory of relativity.”

But before he could confirm anything, Campbell and Robert Trumpler, who was part of the Wallal eclipse party, had to measure the results against the comparison plates. Despite the heat and the dust, some of the plates were developed in Wallal and the rest in Broome en route back to Perth. The photographs were then shipped back to the Lick Observatory, where they could be carefully analyzed. Campbell knew the conditions had been favorable, unlike for the British expedition to Christmas Island: cloud had entirely obscured their view. There was overwhelming press interest and speculation in the outcome. On April 12, 1923, Campbell confirmed Einstein’s theory of relativity base, with measurements from over 100 stars. His cable to British astronomer Frank Dyson ended with the words “We need not repeat Einstein text next eclipse.”

Amid the data, logistics, preparation, measurements, press attention, the expedition also witnessed an extraordinary event in an extraordinary place. As Chant reported afterward, in addition to his gratitude towards the government assistance, “many valued personal friendships were made. Indeed everyone we met seemed anxious to render us all possible help to make our expedition pleasant and successful. It was the experience of a life-time.”

*Update: We originally misstated east and west. The story has been corrected.

3 Corpse Flowers Are About to Bloom in Washington, D.C.

They're expected to open up right around the solar eclipse on August 21.
einsteineclipse madnessaustraliavisualphotographyscience

How a 19th-Century Biologist Became an Underwater Photography Pioneer

A deep dive into the "submarine landscapes" of Louis Boutan.
science

Under a microscope, even a toothbrush can be a work of art.
science

The International Space Station Had Two Views of the Eclipse

And cast a shadow of its own.
brain collections

3:07
Want to see fewer ads? Become a Member.
From Around the Web
Related

August Strindberg’s failed photography experiment continued to evolve, chemically and beautifully, long after his death.
Read more
Thanks for sharing!