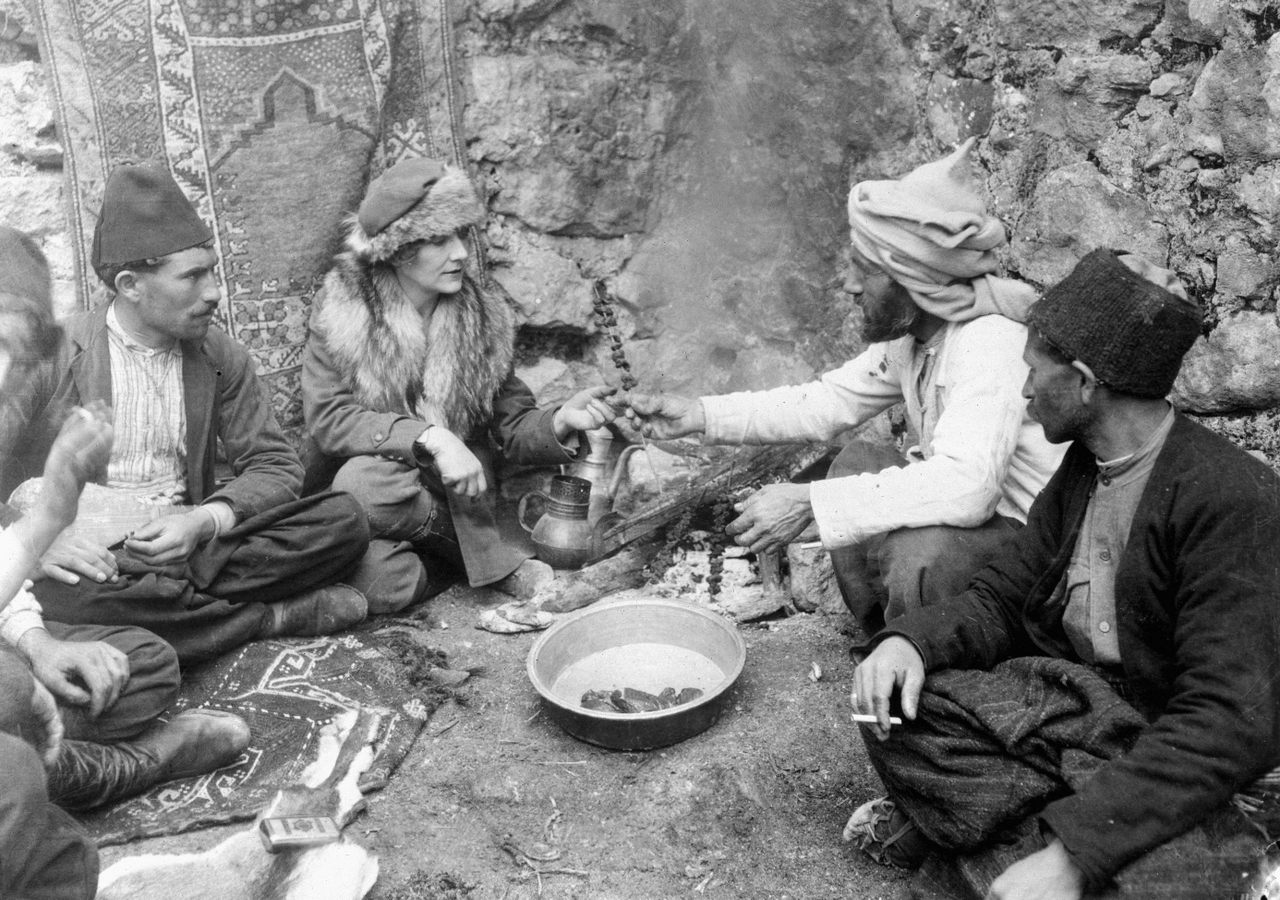 Journalist and explorer Marguerite Harrison shares a meal with a group of Bakhtiari men. (From the documentary A Nation's Battle for Life by Merian Cooper and Ernest Schoedsack) Bettmann/Getty Images
In This Story
Place

A treasure trove of artifacts, books, and artwork from the "golden age" of exploration.

In August 1923, Marguerite Harrison sailed from New York bound for Constantinople. The 44-year-old had returned just five months earlier from Russia where she had been imprisoned, for a second time, on suspicions of espionage. A widowed mother of a teenage boy, Harrison had thought she would settle, finally, in New York, but she had a curiosity about the world that could not be satisfied by the domestic life her well-to-do family envisioned. The former war correspondent and American spy quickly joined a small expedition that planned to film the long migration of the nomadic Bakhtiari people through the politically unstable former Ottoman Empire. Over the course of the next year, Harrison trekked, mostly by horse, through modern-day Turkey, Syria, Iraq, Saudi Arabia and Iran, observing a culture few Westerners had ever seen. When she returned to New York in 1924, however,  the newspapers did not want to hear ethnographic insights from the “lady explorer.”

“The reporters wanted to know if I had become enamored of a sheik!” Harrison said.

Each of the four women who gathered for tea in an apartment on New York’s Upper West Side on a blustery winter day in early 1925 shared Harrison’s complaints: They were all explorers in an age of homemakers.

Over the previous decades, the women—Harrison, Blair Niles, Gertrude Shelby and Gertrude Emerson—had collectively covered hundreds of thousands of miles across five continents. Between them they spoke nearly a dozen languages. Niles was a travel writer and novelist who traveled by ox cart through Colombia; Shelby, an economic geographer, who had lived by herself in a small village on South America’s “wild coast”—a region that includes modern-day Suriname—studying the folklore of the indigenous inhabitants; and Emerson, the youngest of the group at 34, an editor and budding activist who had traveled with and interviewed Mahatma Gandhi in 1921. Each, like Harrison, had written extensively about the cultures, geographies and economies they had encountered in their work, but their contributions went under-appreciated by the public, which saw the woman explorer as mere novelty.

Even more galling to the women was the lack of recognition they received from their male counterparts, who hobnobbed at the Explorers Club. Membership in that preeminent organization, founded in 1905, was explicitly reserved for “men who have engaged in exploration or who have added to the geographical knowledge of the world.” Harrison had watched as the men who had been a part of the expedition to film the Bakhtiari were welcomed into the Club.

The four women had met that day in Shelby’s apartment, just a handful of blocks away from the Explorers Club, for the first of what Niles called their “indignation meetings.” But over tea, the women’s indignation turned to resolve and then a decision: They would establish their own organization, the Society of Woman Geographers. Named for the emerging academic discipline, it, too, would be exclusive. It would have as members “only women who have really done things,” Harrison wrote to explorer Harriet Chalmers Adams, who became the Society’s first president.

The Society of Woman Geographers hosted its first dinner in February 1932 at the American Museum of Natural History in New York. It was an elegant affair, and newspapers reported that the guest list was a who’s who of women explorers, including Mrs. George Palmer Putnam—better known today as Amelia Earhart—and Elizabeth Dickey, who brought with her the mummified head of a South American Indian. (“If the other women explorers were horrified they concealed their shudder,” wrote the New York Times correspondent. “A male reporter swallowed an olive pit.”)

Explorers Club president Roy Chapman Andrews had also been invited to the celebration, but he did not attend. The invitation had not been a friendly one. The Society wanted the prominent adventurer to answer for a speech he had recently given to the women of Barnard College. “Women are not adapted to exploration,” he told the students. Pleading another appointment, Andrew sent a letter to the Society, which was read aloud at the dinner. He had compliments for the women of the Society—“I have in mind many cases where women have done splendid work in the field and I have great admiration for the accomplishments”—but he made it clear why women explorers needed the support of the Society of Woman Geographers. “I think, however, that you will agree with me that one or two women would not fit to the advantage in a large [expedition] of men.” In fact, it would be nearly 50 years before the Explorers Club abandoned this view; the organization first admitted women in 1981.

On the occasion of the 50th anniversary of the organization, which is still active today, Gertrude Emerson Sen, the last surviving founder, penned a letter to the membership: “I am deeply impressed by the articles and books and published lectures noted after your names, and feel humbly proud of being associated with you. There is no place in the heavens, on earth, in the oceans or under them, that some one of you had not penetrated,” she wrote from her home in the Himalayas. “I sometimes wonder, however, if your travels today to the Arctic or the Antarctic or any other remote area, when you can fly there in a few hours, can be quite as fascinating as ours were in the olden days, when we travelled by slow freighters or camel, or on horse back or on foot.”

Grandma was just making a sweater. Or was she?
mystery

The fate of Aaron Burr's daughter remains a topic of contention.
literature

How potboilers and pin-ups showed gay and bisexual women they were not alone.
murder

Revisiting the case of the only woman ever executed on its shores.
Video • Object of Intrigue