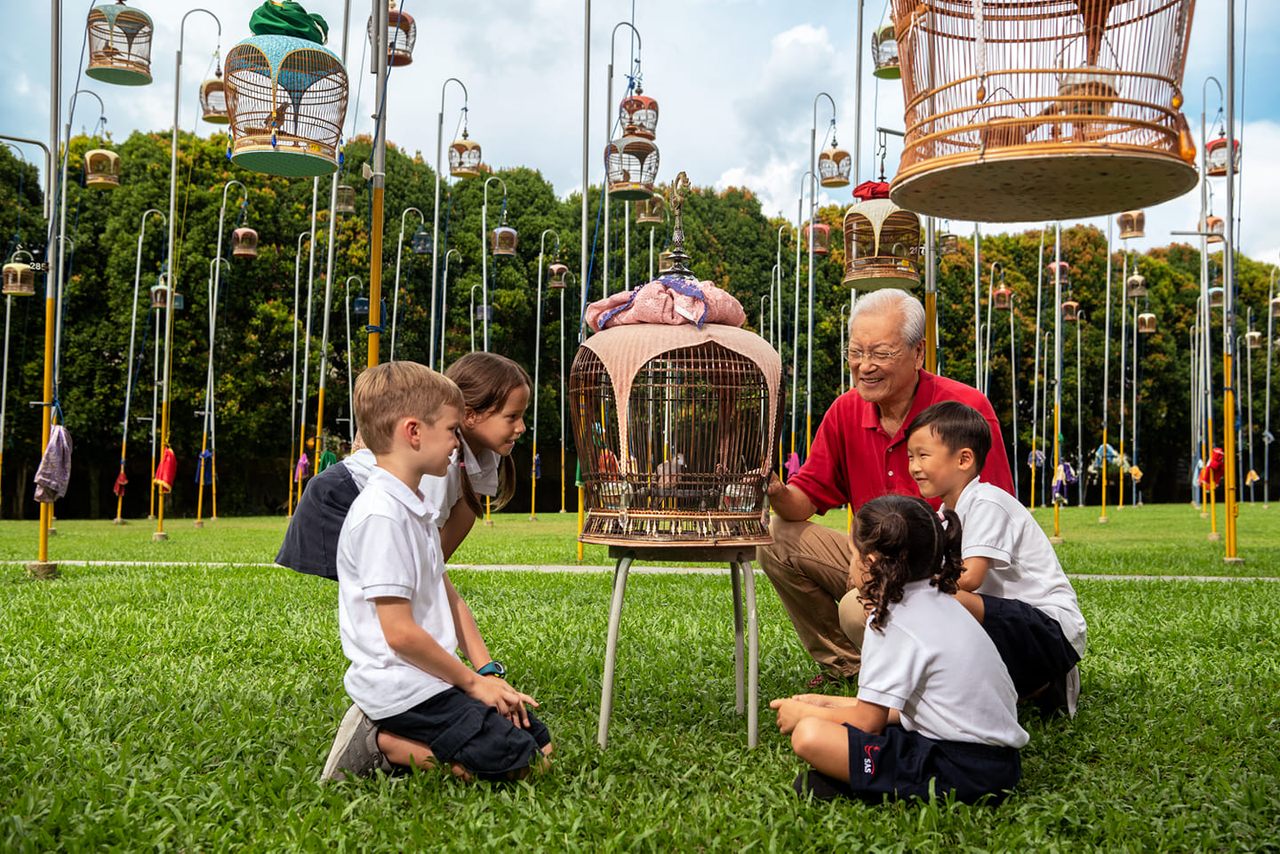 At the edge of a lush suburban park in Singapore’s Ang Mo Kio neighborhood, a hundred people form a line that snakes around the parking lot. It ends at a registration table where a poster splashed with bright colors announces the event: Kebun Baru Birdsinging Competition. Beneath the shade of a nearby tree, friends chat and offer each other encouragement. In covered bird cages at their feet, zebra doves, white-rumped shamas, red-whiskered bulbuls, Chinese hwamei, and Indian white-eyes will be among the species judged.

“Each bird has its own character, and that’s what makes the bird more interesting and beautiful to me,” says a young man named Yusof Muhammad, one of the songbird enthusiasts preparing for the competition. Muhammad says he only keeps white-rumped shamas because, “they have a lot of melody and a beautiful sound.”

Scientists believe that songbirds in Southeast Asia have a complicated repertoire of social calls because sounds are more efficient than visual cues for communicating in the thick, dense jungles where they evolved. The birds’ musical calls have endeared them to enthusiasts for generations, but also drive unsustainable poaching. A concerted effort, led by a local ornithologist, is underway to educate hobbyists and use their love of the birds to safeguard wild populations.

At the Kebun Baru competition, Muhammad is nervous. There are a hundred shamas registered for the day’s events. His friends reassure him, clapping him on the back, as he hangs his birdcage in the arena, a 12-by-12 array of numbered overhead hooks spaced a few feet apart.

Glossy midnight blue with orange chests and dangling white tail feathers up to a foot long, the shamas perch in their ornate wooden cages beside hand-painted ceramic food dishes. A few timid first chirps rise up in the air and are answered. Soon, warbles and chirrups spring up from all around.

The competition’s judges pace between the rows of cages, pencils and clipboards in hand. Each bird is evaluated on volume, frequency, and duration of song, beauty of its melody, plumage, and how actively it moves about its cage.

The club at Kebun Baru is the largest of its kind in Singapore, an island city-state of nearly six million. Outside of the monthly competition days (currently on hold due to the government’s pandemic restrictions), dedicated hobbyists bring their birds to the club weekly or even daily to train; as social creatures, songbirds won’t sing unless others of the same species are nearby.

“The birds need company to sing, so the owners bring them here to encourage one another. The facility is like a singing school,” says songbird enthusiast Robin Chua, who organizes Kebun Baru’s competitions.

Conservation ornithologist Jessica Lee, with Wildlife Reserves Singapore, says the practice of songbird keeping across southeast Asia started centuries ago; in 2018, the National Heritage Board of Singapore designated songbird rearing as Intangible Cultural Heritage. Lee says her grandfather was a hobby songbird keeper, and helped inspire her love for birds.

“Songbird keeping became a medium for social interaction,” says Lee. “People could sit down with their close friends and talk about their birds, just as you and I today might bond over a common interest.”

But as the popularity of songbird keeping has grown, so have concerns. While many enthusiasts keep birds that were bred in captivity, wild songbirds are still caught and sold at unsustainable levels. “They are known to sing well, so they are never safe,” Lee says. “Wherever they are found to pop up in the wild, they’ll be caught.”

Lee is working to build a network of conservation stakeholders across Southeast Asia, including local birdsinging enthusiasts. She hopes that engaging and educating the community will reduce demand for wild birds and lead to better management and regulation. “As with any cultural activity, we need to be sensitive,” Lee says. “Bird keeping in Singapore is so deeply tied to culture. It’s part of our heritage.”

As part of this work, Lee and her team recently carried out a series of interviews with more than a hundred Singaporean songbird keepers, to better understand their motivations and how this might relate to conservation efforts. One of the questions they asked was whether the hobbyists prefer to keep birds caught from the wild or bred in captivity.

But a large majority of the survey respondents buy their birds from online markets or pet shops, where it can be difficult to discern a bird’s origin; only a few individuals reportedly bred their own birds to enter into competitions. One of those individuals is Amir, who requested his last name not be used; he’s known as Mr. Finches in the birdsinging community.

After a lifetime of keeping songbirds and entering them in competitions, the retiree has now shifted his focus to breeding and rearing them. His ground floor apartment, including a sprawling, leafy patio, fills with songs from a dozen birds. Every day, he wakes at 4:30 a.m. to prepare their meals according to a strictly regimented diet that includes broccoli, lettuce, pear, grapes, and other fresh ingredients, plus vitamin-infused drinking water.

“I started off keeping songbirds as a hobby from a very young age, and only later in life did I realize that taking birds from the wild causes such harm,” says Mr. Finches. “That’s really why I went into breeding songbirds. I would like to do more, to breed good-quality birds on a larger scale, as my little way of giving back.”

Lee is optimistic that by working with songbird hobbyists, more inroads can be made to protect vulnerable species. “Singaporeans are very educated nowadays about conservation. They know how to value nature,” she says. “Songbird keepers can positively affect demand and supply by purchasing their birds from sustainable sources and promoting species of canaries, finches, or doves that are already well established in captivity.”

In the Kebun Baru competition arena, the songbird keepers’ love for their birds and their hobby is palpable. At the end of the day, Muhammad holds a trophy with white and orange ribbons, a wide smile filling his face. His prized shama was ranked sixth in this month’s competition, but, as it’s been for centuries, social connection is the biggest prize. “At the end of the day, it’s not the cup or winning that keeps me going, it’s the friendships that motivate me,” says Muhammad. “Being part of the Kebun Baru community is what makes this hobby come alive.”

As birds go, these Australian animals are unusual in many ways, including how they divvy up parenting duties.
insects