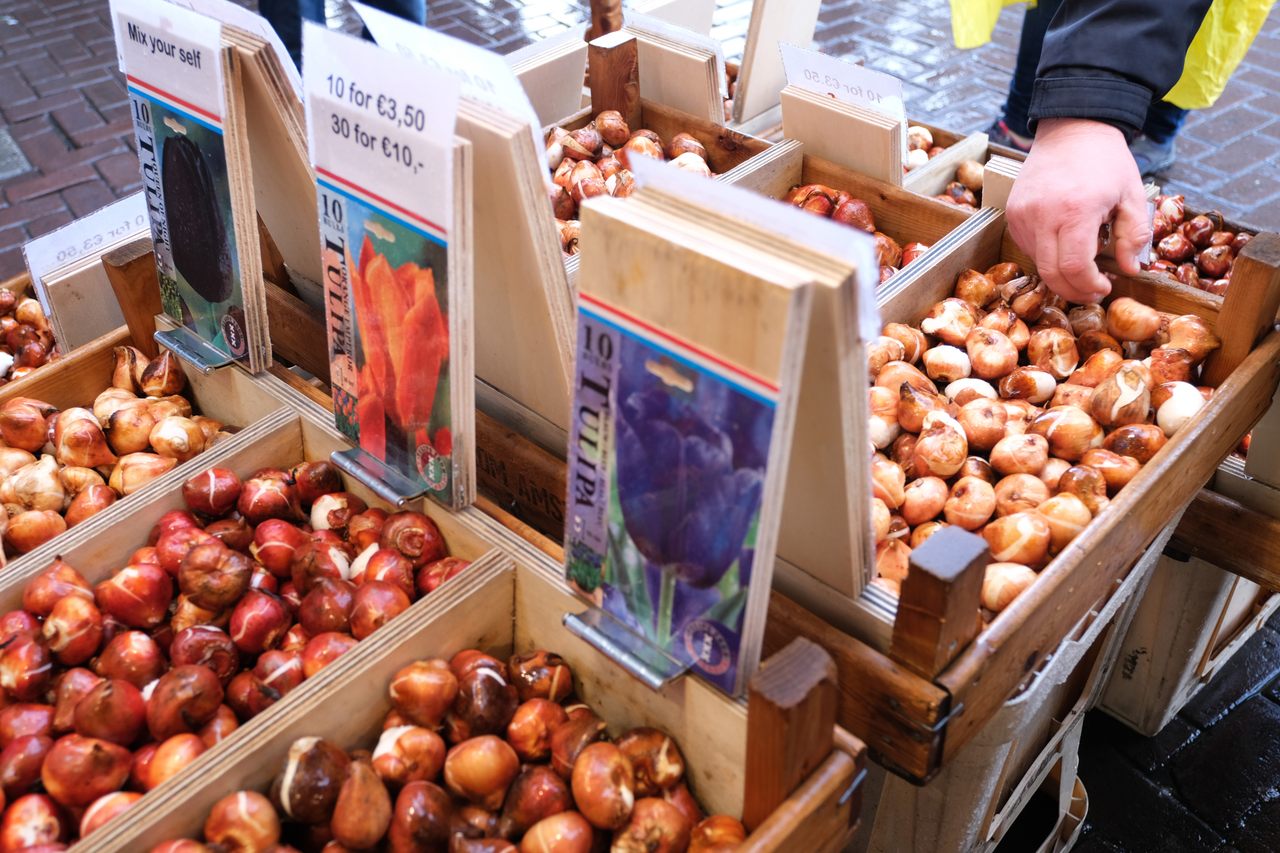 When Christianne Muusers, a Dutch culinary historian, was researching World War II-era cookery, one story stood out. Her elderly neighbor recounted growing up in Nazi-occupied Rotterdam, a city that was all but reduced to rubble by German aerial bombings in 1940 and then by Allied bombings in 1943. By 1944, when he was nine years old, there was only one thing left to eat: tulip bulb soup.

“His father had been eating almost nothing but tulip bulbs,” says Muusers, who specializes in recreating Medieval peacock pie and other long-lost recipes. Although parts of the tulip plant are safe to eat if correctly prepared, the germ at the core of the bulb can cause severe intestinal issues. Since his family had no previous experience cooking with them, they didn’t realize the germ needed to be removed. “It led to a tremendous blockage of his bowels, which caused him to have a huge, swollen belly.” After days of discomfort, his father found relief. “His father passed a wind that was the longest and loudest he had ever heard,” Muusers says. It’s one of the only memories of that dark time that still elicits a laugh.

Many Dutch survivors of the Second World War have a story about tulip bulb soup, a dish that would have seemed absurd prior to the Nazi occupation—and not only because of the mild toxicity. Tulip bulbs already had a long history in the Netherlands as a cash crop and, for one brief frenzy, as one of the most valuable commodities in the country. In 1636, at the height of tulpenmanie (tulip mania), rare bulbs traded on the Stock Exchange of Amsterdam sold for as much as a lavish home on the Amsterdam Grand Canal. According to one story, an unlucky sailor was thrown in jail for eating an especially valuable bulb. While it is almost certainly false, according to Anne Goldgar, author of Tulipmania: Money, Honor, and Knowledge in the Dutch Golden Age, the idea of tulips as a foodstuff was nevertheless ludicrous.

But the winter of 1944, known as the Hongerwinter, or “Hunger Winter,” was a time for desperate measures. In September 1944, Dutch railway workers attempted to disrupt the movement of Nazi troops and supplies by halting the country’s trains. In retaliation, the Nazis blocked food supplies arriving by sea right as the country plunged into one of the coldest winters in memory. With the canals frozen, there was no way to transport food to the densely populated cities of Rotterdam, Amsterdam, and The Hague in the western part of the country. More than 20,000 people perished, largely due to malnutrition.

“Gas and electricity were shut off. People chopped down trees and dismantled empty houses to get fuel,” says Karlien Metz, a conservator at the Dutch Resistance Museum in Amsterdam. “At the lowest point, in February 1945, the official ration only contained 340 calories a day.”

Those who survived the famine found ways to stretch the little that was available into some semblance of familiar foods. As the war dragged on, broth was replaced with water with Maggi, a Swiss invention that could bolster a weak soup with synthetic glutamate, while “curry powder” was mostly yellow food coloring with flour or some other starchy binder. By 1941, recipes for regeerings-koffiesurrogaat, a “surrogate coffee” consisting of 12 percent coffee beans supplemented with 52 percent barley or rye, 20 percent chicory, 8 percent green peas, and 8 percent tulip bulbs, were making the rounds.

“During the occupation, a lot of coffee and tea stock was taken away to Germany,” says Manon Henzen, a food historian and author of Cooking in Wartime: Creative and Healthy Cooking in the 1940s. “Tulip bulbs were dried and made into flour. Because [the bulb] has a lot of starch, when roasted it would give the coffee a deep, nutty flavor.”

Tulip bulbs may have already infiltrated coffee grounds, but the average Dutch citizen in 1944 would still have been skeptical about eating them. As the temperatures dropped and food supplies plummeted that November, the Dutch government sought any potential solutions. Although the western region of the country grew few vegetables, it did have abundant tulip fields.

With time running out, the authorities launched a propaganda campaign, complete with recipes using tulip bulbs as a substitute for everything from potatoes in rösti-style fritters to cabbage in sauerkraut. Tulip bulbs were grated into soup and boiled into stamppot, a hearty dish made of mashed potatoes or root vegetables. By the end of the winter, locals were boiling bulbs into syrup and grinding them into flour for bread and savory cookies. Henzen, who offers a historical cooking class focused on World War II recipes, often brings the latter to lectures.

“They discovered that tulip bulbs have a lot of calories, which is really important for survival. A tulip bulb actually has more calories than a potato,” Henzen says. “It was a challenge for the Dutch government to convince people to eat tulip bulbs, so they had flyers and cooking demonstrations. They even had special ambassadors go out to convince people of how healthy they were.”

Though the Hunger Winter left lasting physical and psychological damage on an entire generation, the toll would have been far worse if not for the ingenuity of ordinary cooks. Even under hellish conditions, everyday people kept doing what they could to undermine the Nazi regime. In February 1945, a copy of Het Volk (The People), a paper circulated by the Dutch underground resistance, contained a poem that read:

“[The Dutch people] were very inventive, just as they are today,” Henzen says. “A few trendy chefs in the Netherlands have even [recently] discovered tulip bulbs as an ingredient.”

Among the fine-dining restaurants to incorporate tulip bulbs on their menus are Café Caron in Amsterdam and De Librije in Zwolle. Ironically, the organic Yokohama bulbs that show up on the menu at the plant-based, Michelin-starred restaurant De Nieuwe Winkel, which has a resident botanist, are among the most expensive ingredients on the menu.

“[Tulip bulbs] are quite a luxury product, since it takes five or seven seasons to make one,” says Emile van der Staak, chef at De Nieuwe Winkel. “I think it’s even more expensive than caviar when you factor in all of the time and energy.”

For van der Staak, cooking with tulips is worth the expense because of their connection to the past and present of his homeland. Nowadays, the Netherlands produces roughly 90 percent of the global tulip supply. Like his contemporaries, van der Staak grew up listening to tales of tulip bulb soup and wartime hardship, all of which only adds a layer of nuance to the narrative.

“In the Netherlands, the story that your grandmother would always tell was, ‘We had to eat tulip bulbs and it was terrible, but it made us survive,’” van der Staak says. “Actually, tulip bulbs can be quite delicious, but people during the wartime had to eat bulbs that had been lying around in storage for a couple of months, so they became dry and bitter.”

At De Nieuwe Winkel, van der Staak chars whole bulbs on a grill and glazes them with barbecue sauce, stuffs them with chestnuts, and ferments them into miso, which he uses to make a sweet-savory cheesecake. Inspired by South Korean black garlic, he once experimented by allowing a batch of tulip bulbs to ferment at 60°C for 40 days, with impressive results. “The tulip bulb has this amazing transformation of flavor and develops these fruity, ripe-berry, caramelized notes,” van der Staak says.

His favorite tulip creation, however, was a collaboration with artist Maarten Baas in 2018 for an unorthodox riff on patatje oorlog. Literally translated as “war fries,” patatje oorlog is a mess of French fries, mayonnaise, peanut sauce, and raw onions. Van der Staak reinterpreted the dish by using deep-fried tulip bulbs and serving them with hay-infused mayonnaise and a chestnut cream. Baas served his “war fries” in a classic drunk-food fashion: in a little plastic cup with a fork. It’s an irreverent nod to the strange turns that history takes—how a flower bulb can become a fetishized luxury object, a humble source of sustenance, and a cultural symbol of resilience.

Adapted from a WWII recipe by Christianne Muusers

When preparing this soup, make absolutely sure that the tulip bulbs are suitable for consumption, because bulbs are treated with all kinds of pesticides. That is not a problem when using them in the garden, but it is when they are meant to be eaten. Buying “organically grown” bulbs is not enough, ask the supplier for information.

For every crisis, a recipe.
food

One of Bengal’s greatest tragedies is overlooked in the West. It’s missing from cookbooks and food writing, too.
food

Home gardeners planted despite an initial federal policy of leaving farming to the professionals.
Video • Object of Intrigue

The world's first floating farm is staffed by one human, three robots, and 35 cows.
Amsterdam, Netherlands

Sail in for a ’dam good slice.
Amsterdam, Netherlands

Famed for its pie, this eatery has a hidden tunnel that allowed Catholics to secretly walk to church during the Reformation.
Amsterdam, Netherlands

This pirate-broadcasting-tower-turned-restaurant played a rebellious role in the history of Dutch television.
Want to see fewer ads? Become a Member.
From Around the Web
THE GASTRO OBSCURA BOOK
Taste the World!
An eye-opening journey through the history, culture, and places of the culinary world. Order Now