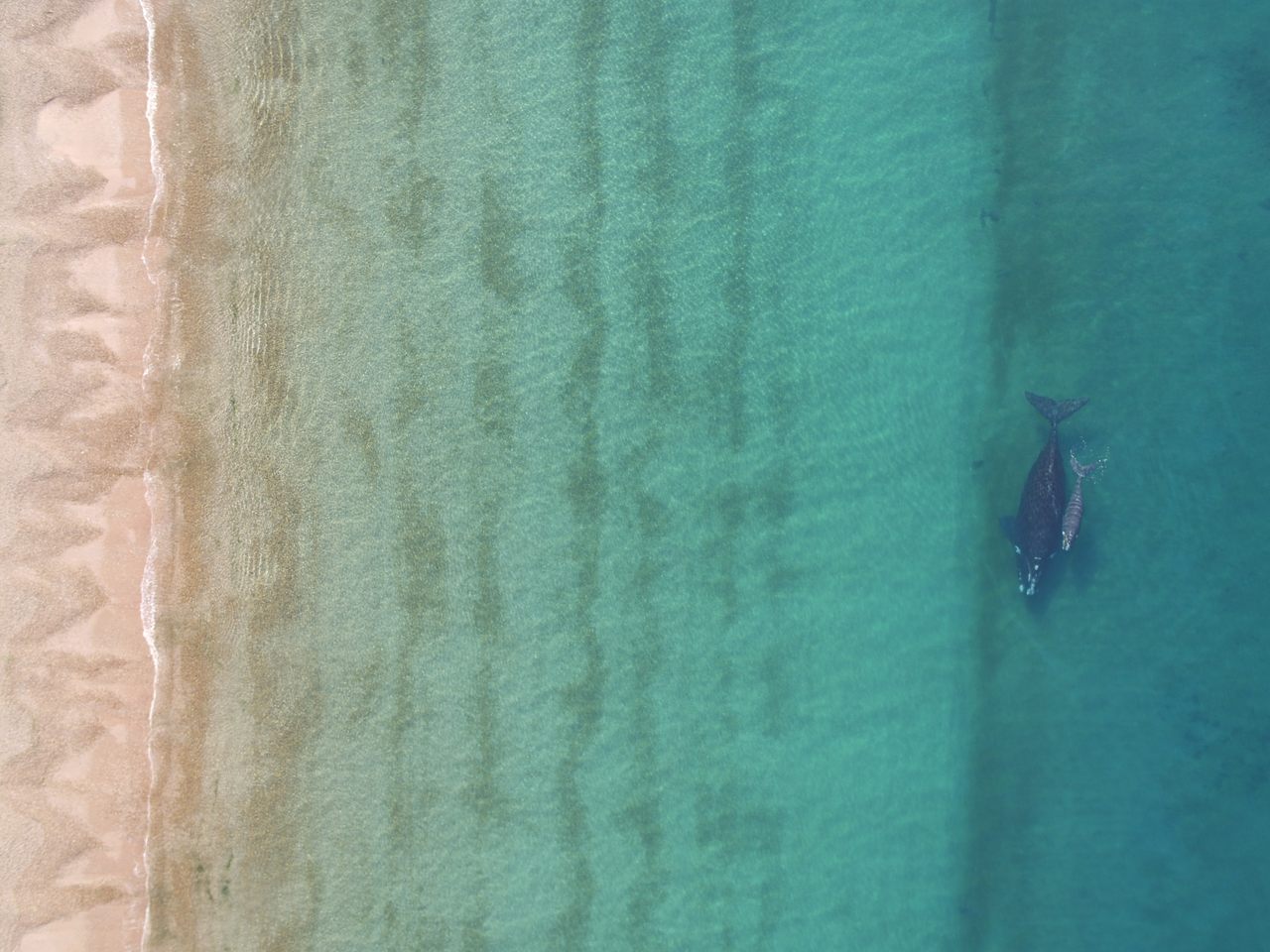 The whales were easy to see in the clear waters near the shore of Península Valdés. Courtesy Fredrik Christiansen
In This Story
Destination Guide

If you’ve ever seen a humpback whale spouting in the distance, or a blue whale replica swooping over a museum gallery, or you’ve peered into a display case at the long beige bristles that filter plankton out of seawater, you’ve probably surmised that baleen whales—which include right whales, blue whales, humpbacks, and more—are enormous. According to NOAA Fisheries, the southern right whale, Eubalaena australis, can stretch to around 55 feet and weigh as much as 60 tons.

But how gargantuan, exactly, is each individual whale? It’s an important question, but hard to answer. A whale’s mass “tells you about the health of the animal, and in the context of its environment, it gives you a sense of how it’s doing nutritionally,” says Michael J. Moore, a biologist and director of the Marine Mammal Center at the Woods Hole Oceanographic Institution. “If the weight is insufficient, then the animal’s not going to get pregnant. It’s a critical number in terms of population.”

Scientists can learn a lot from whales that wash up on beaches, but “the sheer size of a deceased whale and the location of the carcass makes physically weighing deceased whales extremely challenging,” says Ashley Barratclough, a conservation medicine veterinarian at the National Marine Mammal Foundation. It can be hard to extrapolate measurements from a whale carcass, because they’re so quick to bloat with gases. Distended or squashed bodies make it hard to accurately gauge girth, and fluid loss can skew mass measurements. (They can also lose large quantities of blubber, Barratclough says, if they starve while entangled in a net.)

Even a precise post-mortem accounting is a one-time-only affair, and that can be misleading, because the animals’ heft varies a lot throughout the year. Southern right whales can bulk up or shrink by up to 25 percent from one season to another, depending on whether they’re squirreling away fuel reserves in their polar feeding grounds or hauling themselves to more temperature waters to mate or give birth and nurse calves. (Lethal sampling—killing a whale for the sake of scientific study—is now widely considered to be unethical.)

To get a better picture of the animals’ measurements, an international team of nine researchers, including Moore, recently enlisted drones to help them survey a population of southern right whales in Península Valdés, Argentina. “It’s the biggest breeding ground for southern right whales in the world,” says Fredrik Christiansen, an ecophysiologist at Aarhus Institute of Advanced Studies in Denmark, and lead author of the team’s new paper in Methods in Ecology and Evolution. “Thousands come to this area into two relatively small gulfs and they stay there, in sheltered and protected waters.”

It was easy to see the whales’ bodies when they surfaced in the clear, calm, shallow water—sometimes within about 150 feet of the beach, Christiansen says. With the giants so close to shore, “it made it possible to fly the drones from land, and that meant we could sample a lot of whales,” he says.

The researchers studied aerial photographs of 86 whales taken between August and November 2018, from an altitude of about 65 to 130 feet (or 20 to 40 meters). The researchers calculated the animals’ approximate length, width, and height, and then modeled their volume and mass by referencing data from eight North Pacific right whales caught in whaling operations decades ago. Together with the historical measurements, the aerial imagery offered a non-invasive way to get up close and personal with the scale of the whales. They found that the smallest weighed around one ton, while the largest weighed more than 46 tons.

Drones are becoming a more common tool in ecologists’ belt (they’ve previously collected whale “snot” to look for viruses, and helped scientists count ducks), and in the paper, the team suggests that the same technique could be used for many kinds of marine life—especially if the water isn’t too murky, the wind isn’t roaring, and there’s some mass data to reference.

Collecting this kind of morphological data on marine species is an “exciting development,” says Jarrod Hodgson, an ecologist at the University of Adelaide who has used drones for population surveys. “It will allow researchers to investigate questions that were previously off-limits or would have required techniques that negatively impacted sampled animals.”

Sarah Fortune, a postdoctoral fellow in the marine mammal research unit at the Institute for the Oceans and Fisheries at the University of British Columbia, calls it an “important advancement” that will “undoubtedly help answer questions about right whale nutritive health at both the individual and population level.” Fortune says that the new approach allows researchers to continuously monitor an individual’s health and fluctuations over time, and also gather a large sample size that can shed light on how mass differs between calves, juveniles, and adults, and across sexes and reproductive statuses. (Neither Hodgson nor Fortune were involved in the study.)

In Península Valdés, the whales come so close to shore at high tide, Christiansen says, that when the water recedes, you can walk out to the spot where they had floated. The aerial method could help researchers peek in on them again and again, at high tide or low, from a respectful distance.

How Profit and Prejudice Built a Family's Human Skull Collection

And that's bad news for the snails that produced them.
science

We watched it with a whale anatomist to see if the cetacean science holds water.
Video

1:34
Sponsored by Visit St. Pete/Clearwater
Want to see fewer ads? Become a Member.
From Around the Web
Atlas Obscura Trips
Swim with the Singing Whales of Tonga
View This Trip
Thanks for sharing!