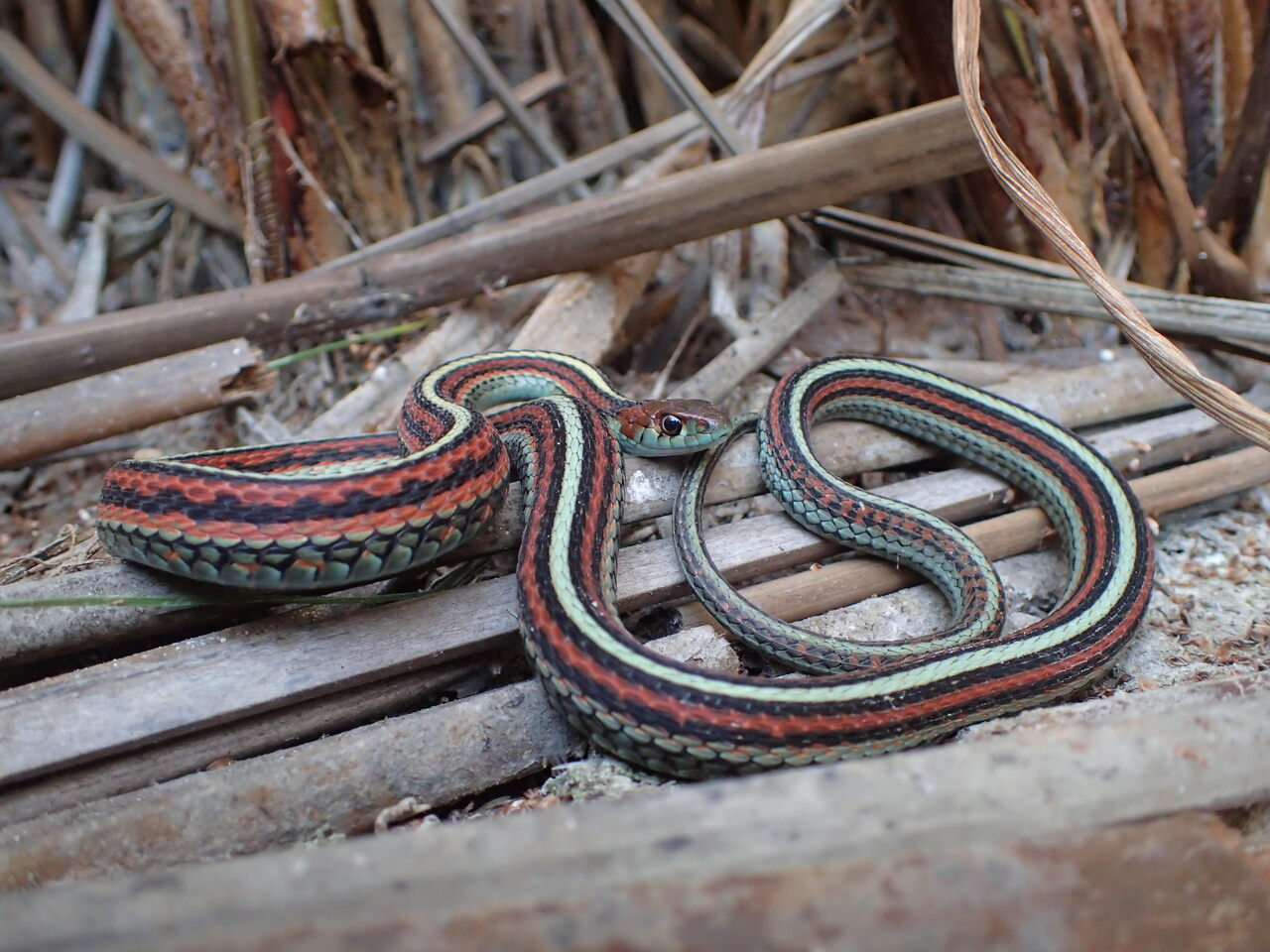 The endangered San Francisco garter snake has found a happy home at the airport thanks to a concerted conservation effort—but climate change and other challenges threaten its future. John Kunna/Courtesy Natalie Reeder
In This Story
Destination Guide

During a typical year, some 55 million people pass through San Francisco International (SFO), the nation’s seventh busiest airport. At some point during their journey to or from the terminal, each one of them will travel by a seemingly unremarkable 180-acre parcel of land, soggy and spartan, bounded by highways and train tracks, bisected by rows of power lines. It may look like any other overgrown vacant lot, but this one is home to the world’s largest population of the strikingly beautiful and highly endangered San Francisco garter snake. A recent study conducted by the U.S. Geological Survey (USGS) confirmed the presence of approximately 1,300 snakes at SFO’s West of Bayshore property—it’s the greatest concentration ever recorded.

The data represents a hard-won victory for Natalie Reeder, who has been working to keep the site snake-friendly for more than a dozen years, first as a consultant and now as the SFO airport biologist. She says airports usually hire scientists like her to keep animals out; her job is to make them stay. Reeder and her team are responsible for managing the “kind of nasty” West of Bayshore lot in an attempt to support the resplendent but reclusive snake.

Simply put, the San Francisco garter snake is a stunner. Famed herpetologist and guidebook author Robert Stebbins—a man who had seen a lot of snakes—once deemed it “the most beautiful serpent in North America.” Though it appears ostentatious, wearing bold stripes of turquoise and red down the length of its 4-foot-long body, the snake is notoriously introverted, quick to flee, and hard to capture. This has made getting an accurate census of them difficult.

What conservationists have long known, however, is that the snake is in trouble. Endemic only to the San Francisco Peninsula, the showy creature has seen its wetland habitats filled in by farm fields or paved over by urban sprawl. Its primary food source, the California red-legged frog, has declined for the same reasons. Even when it could find suitable territory, the snake wasn’t safe. Prized for its exquisite colors, the reptile is a popular target for poachers and collectors.

These threats landed the San Francisco garter snake on the U.S. Fish and Wildlife Service’s (USFWS) very first endangered species list, published in 1967, though it would take the agency nearly two decades to draft a recovery plan for the animal. That 1985 document established West of Bayshore as one of the snake’s last remaining refuges and called for a moratorium on development there. (Just in time, too: Reeder says plans for a subdivision were in the works.) For 23 years, the land remained largely untouched, protected but neglected, filling up with invasive plants and harmful industrial runoff from the surrounding areas.

In 2008, after an unscientific but worrying population survey, SFO got serious about the snakes. They partnered with the USFWS to create an updated recovery strategy for the San Francisco garter snake and the animal most integral to its survival, the California red-legged frog, making plans to address concerns such as water quality, vegetative cover, and pollution. That’s where Natalie Reeder came in.

Since then, her team has worked to rebuild the snake’s Goldilocks-esque dream home—not too wet, not too dry, open banks for basking in the sun, but thick cattails for cover from predators. They built rainfed ponds, deepened existing wetlands, and cleared overgrown drainage canals, efforts that benefited both snake and frog. Instead of mowing a firebreak each summer—exposing the soft animals to potentially lethal blades and tractor tires—they brought in hundreds of goats to clear the land.

Reeder says that SFO also “beefed up security,” reinforcing the lot with gates and fences to protect habitat and prevent illegal collection.

Invasive plants looking for a toehold at the site will always be an issue, and, thanks to the surrounding impervious surfaces, Reeder and her team will likely never be able to insulate West of Bayshore from urban and industrial runoff. But the ecological improvements and increased security seemed to have tipped conditions there in the snake’s favor.

“It’s really encouraging that [the snakes] can exist among such a high level of urban density,” says Brian Halstead, a USGS wildlife biologist and one of the authors of the study. He and his colleagues spent two years surveying the population and genetic variation of the snakes at the seven sites where they’re known to live. While the team had good news to report at SFO, they found less encouraging data elsewhere.

For one thing, populations at four of the sites surveyed were precariously low, with fewer than an estimated 100 snakes. Additionally, all seven sites are geographically isolated from one another, scattered around the peninsula, preventing the movement of snakes to and from neighboring locations and possibly degrading genetic diversity. Halsted says that improving connectivity will be important for the snakes’ long-term prognosis, including possibly creating translocation or captive breeding programs.

With 1,300 individuals on the 180-acre site, Reeder thinks West of Bayshore “could be at carrying capacity,” for the snake. To prevent overpopulation and improve genetic diversity at other sites, she believes that, one way or another, “some of these snakes are going to have to start moving.” The USGS study also noted that the West of Bayshore property could be an ideal source population to provide other sites with an infusion of new snakes.

While Reeder calls the low population counts at other locations, “pretty scary,” she worries most about the impacts of climate change. She says the airport is updating its infrastructure as a buffer against sea level rise, but that the land at West of Bayshore is low-lying and particularly vulnerable to saltwater intrusion, which would be fatal to the California red-legged frog. On the opposite end of the spectrum, the state’s increasingly long and intense droughts could prove catastrophic for both species and the wet places they need to survive.

More than snakes and frogs depend on West of Bayshore: Thanks to the enhancements by Reeder and her team, the site has enticed a bevy of other wildlife. The San Francisco garter snake now shares its home with two other snake species, the gopher snake and the yellow-bellied racer, as well as deer, foxes, birds, and thousands of invertebrates, demonstrating what is possible, Reeder says, if animals “have a little space and a little food.”

Reeder hopes that the explosion of life in this one, weedy lot might inspire people throughout the peninsula and beyond to support the protection of urban open spaces, no matter how small or unsightly they are.

“Nature isn’t a place you go to,” she says. “Nature is right here, even in some of the most industrial, commercial areas.”

Discovering the trait may help scientists protect the tuatara, which has been around since the dinosaurs.
islands

The bean-sized snail has persevered despite hundreds of related species going extinct in recent decades.
science

With a new train line threatening its habitat, the big cat may be the key to protecting this Mexican reserve—and everything else in it.
animals