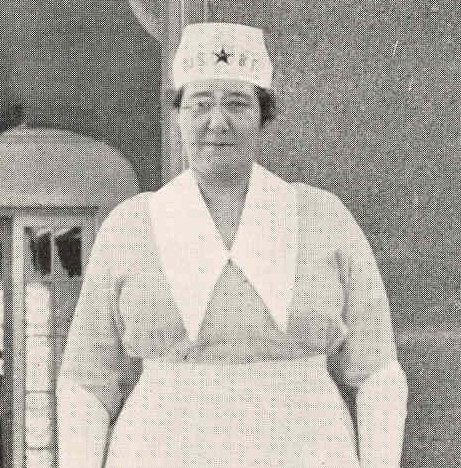 Evelene Spencer was the face of the "Eat More Fish" campaign. The Freshwater and Marine Image Bank, University of Washington/Public Domain

The posters were ubiquitous, tacked up in break rooms and taped behind windows, printed in magazines, and painted on the sides of buildings. “Food Will Win the War!” and “Food is Ammunition!” they declared. “Save wheat, meat, fats, and sugars—and serve the cause of freedom!”

During World War I, the United States Food Administration used these provocative slogans to convince Americans to conserve food for soldiers fighting on the front lines. And while the agency itself was abolished after the war, many of its inventions are familiar to us today, such as “the clean plate club” or the still-popular meatless Mondays.

To promote the latter, the United States Bureau of Fisheries (USBF) launched its own propaganda effort. The Eat More Fish campaign distributed posters that implored patriots to “Save the meat for our soldiers and allies,” or, simply, “Eat the carp!” One of the posters featured a stern-looking woman in a starched lunch-lady uniform and paper cap. “Eat more fish,” she admonished the onlooker, “a real health food.”

The woman’s name was Evelene Spencer and, to many Americans, she would have been a familiar sight. From 1915 to 1922, Spencer held the distinguished title of Fish Cookery Expert at the USBF (later renamed the U.S. Fish and Wildlife Service), where she led the charge in persuading the public to eat seafood—so prolifically that she eventually became known as the Fish Evangelist.

Spencer was a “celebrity chef” before there was such a thing, says April Gregory, curator of collections and exhibitions at the National Fish & Aquatic Conservation Archives in South Dakota. “She was famous with American housewives,” who came to know Spencer through her posters, live cooking demonstrations, and, later, her seminal (and breathlessly-titled) cookbook, Fish Cookery: six hundred recipes for the preparation of fish, shellfish and other aquatic animals, including fish soups, salads and entrees, with accompanying sauces, seasonings, dressings and forcemeats.

Born in Canada in 1868, Spencer was a 47-year-old restaurant manager in Portland, Oregon, when she was hired by the USBF. She was married and the mother of two daughters. But little else is known about Spencer’s life or culinary training prior to her role as Fish Cookery Expert. According to Gregory, Spencer was one of just a handful of women the agency employed. “She was a pioneer in that regard, to hold a position other than secretary.”

Gregory’s research has revealed that Spencer “appears to have had great freedom in her career—making her own choices, scheduling her own tours.” Gregory can’t say how Spencer would have pulled off such a feat, other than positing that, “she must have had a great personality.”

Convincing Americans to eat fish would have required a great personality and then some. In the early part of the last century, a movement to eat more seafood didn’t just challenge the culinary status quo, but cultural norms as well.

According to Barton Seaver, author of American Seafood: Heritage, Culture, and Cookery from Sea to Shining Sea, for most of the 19th through 20th centuries, Americans “mostly considered fish being beneath our aspirations.”

While European colonists in the 1600s and 1700s relied on the ocean for food and commerce, that began to change as the population expanded westward, where the fertile, wide-open land of the nation’s interior became dominated by sprawling farms. By the mid-1800s, meat had become a proxy for prosperity. “Families could mark their wealth by the amount of meat they served,” Seaver writes. “It was considered embarrassing commentary upon a family’s tastes and economic standing if lobster was served at their table.”

If meat was a status symbol, fish was the marker of the outcast: The poor ate salt cod, Native Americans ate shad, and the sick and infirm were encouraged to eat seafood, since it was thought to be easier on digestion. Additionally, in the popular—and largely Protestant—imagination of the early 20th century, fish was associated with Catholic days of fasting, and therefore notions of penance, punishment, and sacrifice.

According to a 1909 United States Department of Agriculture report, Americans were eating 150 pounds of meat per person annually, while consuming only 10 pounds of seafood. But then, according to Seaver, “World War I broke out and food came to be realized as one of our greatest weapons.” Suddenly, everyday Americans could support the troops fighting in Europe—as well as our allies—by cutting back on and sending high-quality food overseas.

To orchestrate the rationing campaign, the government turned to those eye-catching posters—and to Evelene Spencer. She hit the road, sometimes with her daughter in tow, performing cooking demonstrations at large department stores in cities where the government had sent refrigerated train cars full of fish to rationing patriots.

“As many of these fish are new to the average housewife,” reads a USBF bulletin from November 1918, “the demonstrations are intended to acquaint her with their merits, and at the same time broaden her knowledge of the possibilities of fish.” These possibilities included substituting devil fish for crab and squid for oysters. A few months later, Spencer penned an article for a USBF circular called, “Groupers, Fishes You Should Try, and Recipes for Them.”

Spencer’s live tutorials drew sizable crowds. For example, Gregory found a letter of appreciation from a women’s club in Berkeley, California, expressing “the appreciation of its 300 members and friends for the ‘splendid demonstration of fish.’” The letter promises “there certainly is going to be a more intelligent response to the plea of ‘Eat more fish.’”

Spencer seemed motivated by inspiring an “intelligent response,” not simply disseminating elementary recipes with easy-to-get fish. She wanted Americans to learn how to cook fish, but also where to find it, when to buy it, and how to debone and filet it. Spencer’s cookbook, which she coauthored with John Cobb, a fisheries professor at the University of Washington, may have been written for the amateur cook, but its contents read like a technical manual, containing headings like “How to Tell When Fish Is Fresh,” “Nutritive Value of Fish,” and “Conditions Affecting the Market Value of Fish.”

In her demonstrations and then her book, Spencer encouraged home chefs to try new kinds of seafood to save money and support the fishing industry. “Instead of always purchasing the better-known, high-priced fish,” she wrote, “choose the less-known and cheaper kinds.” To that end, Fish Cookery includes recipes like squid loaf, whale pot pie, creamed shark with cheese, and poached filets of shad in foamy clam nectar. There’s a whole chapter on roe and another on water mammals.

The book overflows with expert tips. Buy even the small fish, Spencer advised, and the frozen fish, two items Americans remained squeamish about but that could, Spencer promised, help bring down the high cost of some seafood. Buy enough fish to have leftovers, and a little more to pickle. Buy oily fish to save on expensive cooking fats. Insist on the trimmings, too, and use them to make fish stock. Most fish, she revealed, “taste much better cooked in half the time usually given in recipes.”

Indeed, the book’s most enduring legacy was its guidance on calculating cooking times and temperatures based on the size and thickness of the fish, a topic that had long mystified the home chef. It also introduced the Spencer Hot Oven Method—coating fish in breadcrumbs and baking it at a very high heat, a technique that today we call “oven frying.” Celebrated chef and food writer James Beard called it “the most important announcement in fish cookery in the last century.”

By 1923, Spencer had returned to her native Canada to take a job at the National Fish Company, promoting the consumption of seafood until her death in 1935. Her obituary describes her as “well-known to the authorities at Washington, where her work on behalf of the Government was valued highly,” and highlights Spencer’s “cookbook which attained a circulation to be envied by a ‘best seller’ in the realm of fiction.”

Spencer’s message to eat more fish still resonates at the agency that once employed her. “History does repeat itself,” says Gregory. “Today our agency is promoting eating invasive species to help save native species.”

Those looking for fish recipes can still find and purchase Spencer’s book online. Multiple editions and more than a century later, its dedication still reads: “To the women of the United States, who, during the world war assisted so willingly in the ‘Eat More Fish’ campaign.”

Home gardeners planted despite an initial federal policy of leaving farming to the professionals.
cold war

How a standoff with Castro knocked a hole in the shrimping village of Thunderbolt.
food

The Regional Chinese Cuisine Linked to an Ancient Assassin

A king died after being served up a murderous fish in present-day Suzhou.
Video