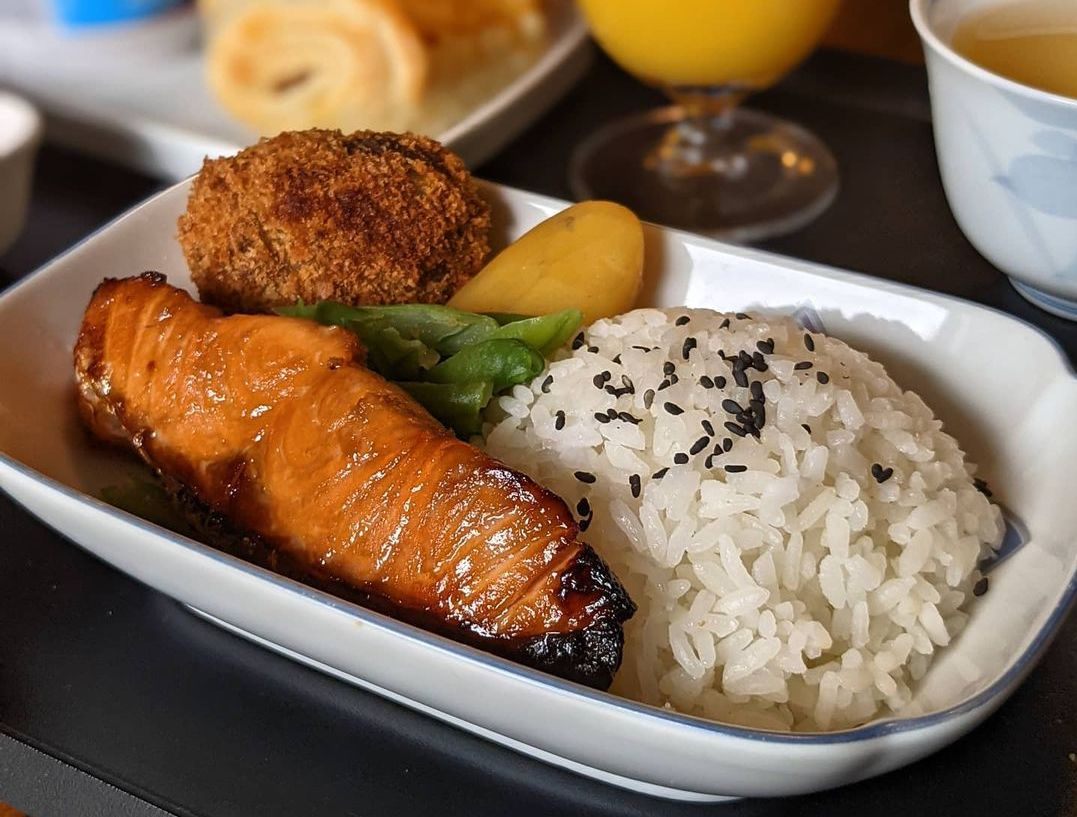 Sennhauser plated this Japanese breakfast on his set of vintage Japan Airlines dishware. All photos courtesy of Nik Sennhauser

Air travel is often something to be endured, not enjoyed, especially when it comes to the food. In the United States, we’ve all gotten grimly accustomed to gritty Biscoff cookies and overpriced boxes of shelf-stable jerky and rubbery cheese.

That’s why air-travel enthusiast Nik Sennhauser says that many Americans don’t understand his current project at all: devoting his Instagram feed to recreating the most glorious meals of air travel.

Sennhauser, a business-support manager living in Scotland, grew up between Austria and Thailand, and spent much of his youth on long-haul flights. He always looked forward to the dinners, lunches, breakfasts, and snacks offered mid-flight, and, in his former life as a roving freelancer, he assiduously documented many of his meals. But he shakes his head at how far airline food in the United States has fallen. “In Asia, you fly somewhere for two hours or even less, and you still get a hot meal,” he says. Whereas on six-hour flights across the States, he notes, you’re lucky to get crackers and cheese.

Sennhauser is what’s called an avgeek, a member of a global network of aviation fanatics. As an avgeek, then, it’s been particularly painful for Sennhauser to be earthbound during the pandemic. In his home in Glasgow, he found himself depressed and bored in the dark days of January. “The weather is not that great, or just miserable,” he laments. “It’s cold, it’s wet. It gets dark at three o’clock in the afternoon.”

So, on a whim one morning, he plated his breakfast on a complete set of airline dishware that he happens to own. Then, he snapped a picture and uploaded it to Instagram.

Sennhauser’s fellow avgeeks responded positively, dropping comments about their own longing for airline food and travel. So Sennhauser plated another one of his lockdown meals, arranging everything geometrically on a small dinner tray. That was the start, he says, of six months of cooking plane-style.

Sennhauser actually owns more than 150 pieces of airline dishware. He photographs his meals on authentic plates, trays, and cutlery; he even owns one of the narrow serving carts that stewards inch down the aisles. (He says they come in handy at home as bar carts.)

The photography project allows him to show off his collection, which ranges from a set of vintage Japan Airways dishes to his holy grail: triangular plates from the long-defunct Austrian airline Lauda. “Their signature was everything triangle,” he says.

This acquisition was both meaningful and relatively recent. After he tweeted about his lack of Lauda plates, another avgeek sent him an entire set. Sennhauser still marvels at this random kindness, made all the more poignant because Lauda was once the airline that shuttled him between Thailand and Austria.

After a dozen posts simply showing off his meals on his plate collection, Sennhauser began digging through his many past photos of airline meals in order to recreate them. There was a breakfast of scrambled eggs and salsa, with a corn muffin, inspired by a Lufthansa A350 flight from Munich to Singapore. Another dinner featured Hainanese chicken rice with steamed bok choi, recreated from the memory of a meal Sennhauser had on a Singapore Airlines trip.

Sennhauser says that bewildered Americans often ask if he constantly flew first-class. “I wish I was flying first-class,” Sennhauser says. “I’m recreating mostly economy class meals.” Some European and Asian airlines see offering their customers something nice to eat as a matter of hospitality, he says. “Whereas in the U.S., I feel like they’ve just thrown up their hands and said, ‘We’re done.’”

Sennhauser doesn’t particularly enjoy cooking (he finds it stressful), but like many people during the pandemic, he made it a new hobby. After gaining some fluency, he recreated some of aviation’s most famous meals.

It might seem ridiculous to those of us accustomed to Biscoffs and ginger ale, but certain airlines do have culinary specialties. Sennhauser can list them off. Lufthansa airlines is known for sandwiches (such as gouda and herbed cream cheese on sunflower-seed bread). Thai Airways is known for its curries. Virgin Atlantic offers a full afternoon tea on certain flights, complete with macarons, madeleines, and scones.

Making and posting airline-inspired meals once or twice a week, Sennhauser says, has been his lifeline. “It brought joy back into thinking about travel,” he says. “It helped me with my mental health.” He’s made a number of new friends over social media, too. Many, he says, are thrilled to find a kindred spirit: someone else who enjoys airline food.

Inside the Diet That Fueled Chinese Transcontinental Railroad Workers

Denied the free meals of their Irish counterparts, Chinese laborers learned to thrive on their own.
collections

The French Art of Cheese-Label Collecting

“It’s more than a hobby, it’s a passion.”
railroads

Across the islands, baked goods, sauces, and much more are for sale 24/7.
Edinburgh, Scotland

Now home to a drinking establishment, this building has a macabre history.
Glasgow, Scotland

The final resting place of one of the most important figures in the world of tea.
Clydebank, Scotland

A historic shipbuilding town is home to a sail-through fish-and-chips shop.
Edinburgh, Scotland

One of Edinburgh's oldest pubs hides a 19th-century skittles alley in the back.
Want to see fewer ads? Become a Member.
From Around the Web
Atlas Obscura Trips
Scotland : Highland Clans and the Trail of Tartan
View This Trip
Thanks for sharing!