How Oysters Kept a King Satisfied and Women in Charge - Gastro Obscura
Want to see fewer ads? Become a Member. 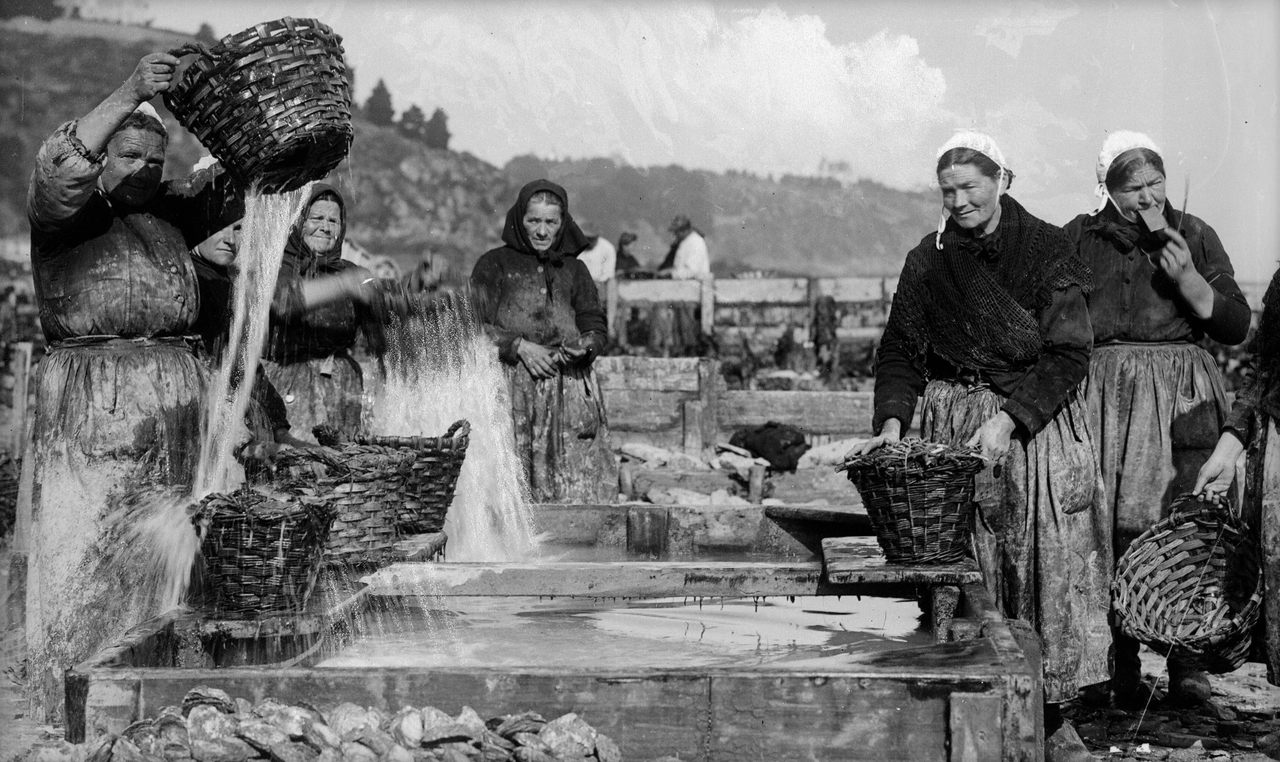 The oysters of Cancale have been pursued by kings and conquerors for more than a millenia. In 56 B.C., Julius Caesar’s troops left behind piles of pearly shells in figurative oyster graveyards called middens. More than 1,500 years later, King Louis XIV, the Sun King, cemented Cancale’s status by demanding that his briny bivalves come from no other place but Cancale.

But in the 19th and early 20th centuries, the women of Cancale, France, were as well known as the town’s oysters. For during a time when talk of women’s suffrage was in its infancy, and female politicians and businesswomen were rare, retrieving the royal oyster necessitated a uniquely organized and largely women-run town. From working tirelessly in the mucky oyster beds, to policing the harbor and negotiating export contracts, women proved so essential to the town’s survival, and elite gastronomy, that newspapers and artists extolled their brawn and beauty.

From the 16th century to the early 20th century, Cancale’s bread and butter was earned through fish from the New World and oysters from Brittany’s “Emerald Coast.” Fueled by the Age of Discovery, royal financiers counted on the trade in cod fish to fill their coffers and deliveries of oysters to fill their banquet tables. Already a seafaring people, boys in Cancale grew up with the expectation that school was a mere holding pen. Once grown, they set sail from the harbor, the fairy tale castle of Mont-Saint-Michel rising out of the sea in the distance, and navigated westward to the “New Found Land.” Across the Atlantic, along what is today Canada’s eastern coastline, they spent several months fishing waters rich with cod, which they preserved in salt for export.

These annual expeditions left the small town of Cancale depleted of men for a good part of the year, sometimes more. The dangers of sailing, malnutrition, and disease also meant that more men set sail than would ever return, leaving many women either temporarily or permanently without fathers, brothers, or husbands. The Cancalais integrated this harsh reality into the culture: If no news came of a ship or its mens’ fate, tradition required that the women wait four years before they begin mourning the disappeared as dead. Young widows and women subsisting apart from men thus became sewn into the lifestyle. Managing household affairs, earning a living, and operating independently were essential to the women of Cancale at a time when it was a rarity elsewhere in Europe.

However, for one season each year, men and women did work together. In early spring, the entire town gathered as hundreds of ships worked together to perform the all-important task of dredging the bay and seeding the oyster beds. Officials brought out and distributed drag nets from under lock and key. At the signal, Cancalais in each ship dropped the nets into the bay. Over the better part of a day, ships moved back and forth across the waves, pulling the oysters from their natural beds for seeding in the parcs.

Once the men sailed for the Americas, though, women took charge. The famously fast tides of the Bay of Cancale rushed over seven miles of extended beach “like a racehorse.” Twice a day, the oyster parks flooded with more than 355 billion gallons of water, bringing needed nutrients, before emptying out and exposing the marked and divided mud flats just as quickly. 19th- and 20th-century writers described with awe the sight of women constantly “stooping and standing for hours in the wet, sticky sand, exposed to all weathers.” Dressed in high, over-the-knee boots, they skillfully made their way through the limey mud, bending to gather oysters in woven baskets. “Hurrying in from the beds,” they kept “just in advance of the rapidly-in flowing tide.”

The women not only worked in the beds, but formed the bedrock of industry operations as well. Women negotiated contracts, filling orders to Paris and elsewhere. Women also acted as law enforcement, settling disputes and resolving quarrels in the harbor, and keeping peace on the cliffs above the bay. The phenomenon so captivated Americans that a newspaper headline stated, “The Women of Cancale: Oyster ‘Parks’ Are Cultivated By Women Who Load Ships And Act As Policemen.”

Meanwhile, the status of Cancalais oysters continued to grow. The oysters were such pearls of French gastronomy that in 1806 a famous Parisian restaurant was named after Cancale’s rocky promontory, Rocher de Cancale. Known for its oysters and opulence, Rocher de Cancale regularly hosted famous artists such as Balzac and Alexander Dumas. An 1846 text described it as “the homeland and classic sanctuary for the finest dinners, for those valuing genuine and complete superiority.”

Soon enough, the women of Cancale found themselves similarly romanticized. In 1877, John Singer Sargent painted the women standing among the tidal pools, where the water’s glossy shimmer reflects the figures and clouds above. “Fishing For Oysters at Cancale” and the “Oyster Gatherers of Cancale” put the young artist on the map, while his work’s debut at a New York City salon helped bring the Cancalaise to Americans’ attention.

British and American writers took to the imagery and the story too. Writing for the English Illustrated Magazine in 1908, Gilda Brook described the “perfect cloud of women and children in their picturesque white caps,” and opined that their laborious occupation “cannot be unhealthy, judging by the appearance of the people, for I never saw more hale and hearty specimens.” A 1905 Baltimore Sun article similarly reported that the oyster ladies were the “prettiest of Brittany” and possessed a “hardy femininity.”

The women’s efforts also became part of a broader discussion about women’s work and rights. A 1909 article in the Ohio newspaper The Delphos Daily Herald reads, “It seems strange to Americans, whose ideas of oyster gatherers is bewhiskered fishermen with sloops and dredges … But women do the work, and they do it so well that the French government is not unwilling to give the sex credit for the success of the cultivation.” The Detroit Free Press underscored such credit by stating that many women garnered wages that “more than equal” their male counterparts, and that “when the men do return, they find that the town has been managed so well in their absence and the thrift of the women has been so well exercised that they are content not to meddle.”

Whether on account of their labor or the stories and art depicting it, the women of Cancale became figures of a growing suffrage movement. Headlines underscored power (“A French Town Where Women Rule”), and subtitles accentuated politics (“Women Rule Amid Oysters – A Sight For Suffragists: Feminine Police Keep Order and Feminine Labor Carries on the Industry That Makes Cancale Famous.”) Thrust into the limelight by haute cuisine, and refracted through the lens of American newspapers, the feminist foray along Brittany’s Emerald Coast made waves throughout the globe.

What's the Best Bronze Statue Where You Live?

They were the colorful villains in a conflict that lasted almost a century.
food

Conservationists should look to Indigenous history to fix the future.
Video